Six months and a dozen stocks in, DTA’s Income Builder Portfolio is doing its job — and doing it quite well, thank you.

As we build our real-money, real-time, DGI portfolio, Daily Trade Alert makes $2,000 available each month for me to divide between two stock buys.

Because the IBP has existed only since Jan. 16, we can’t really measure year-over-year income growth. Nevertheless, I have devised a system to take a reasonably accurate look at it.

In the following table, the column titled Q2 2017 INCOME* assumes I had bought the same number of shares of each company on the same dates last year. Using that data, we can come up with rational comparisons. 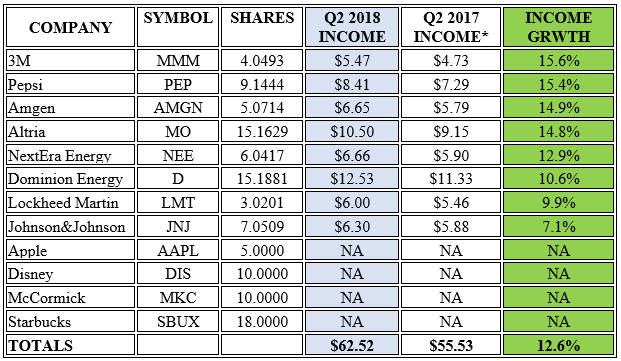 We then can compare that hypothetical figure to the income AMGN actually generated for the IBP in Q2 of this year: $6.65.

The portfolio’s Amgen, 3M and Pepsi positions already have received two dividends this year; Altria, NextEra, Dominion, Lockheed Martin and Johnson & Johnson each got one.

The Apple, Disney, McCormick and Starbucks holdings will receive (and reinvest) their first divvies in the third quarter.

The eight companies for which the IBP received Q2 dividends would have seen 12.6% income growth, an outstanding figure that even bested the 12% from the first quarter.

Once we get through Q1 of 2019, I will be able to start providing true year-over-year income-growth comparisons. Until then, I will do these simulations each quarter. 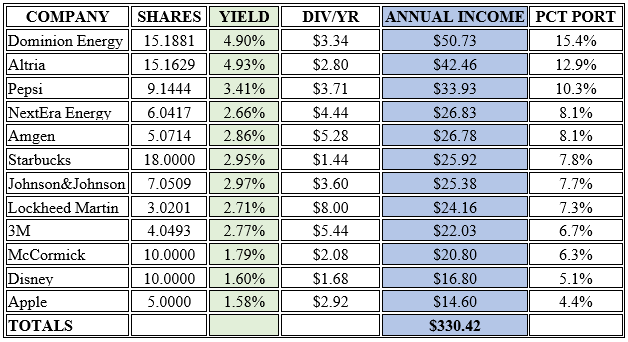 ANNUAL INCOME indicates the projected yearly income for each position given the most recently announced dividend.

For example, Starbucks said last month that it will raise its quarterly dividend to 36 cents per share, starting with its Aug. 24 pay date. I multiplied that by 4 to arrive at a $1.44/year rate (DIV/YR), and then multiplied that by 18 shares for $25.92 in projected annual income.

The last column, PCT PORT, shows the percentage of the IBP’s income produced by each position. Just one quarter ago, Dominion was projected to produce about 25% of the income but it’s now at about 15%. As more companies are added, that figure will continue to decrease.

When we bought nine shares of PEP in February, the annual dividend was $3.22, for a projected income of $28.98. Dividend reinvestment — the fee-free concept informally called “dripping” — resulted in an additional .1444 of a share being added to the portfolio over these last six months. Meanwhile, the company has increased its annual payout to $3.71.

All of that combined to lift our PEP position’s projected income to $33.93, as shown in the table.

And that, my friends, is why we call it the Income Builder Portfolio!

The Only Good Divvies Are Safe Divvies

In running the IBP through the SSD screen, I learned that the portfolio has a 2.89% dividend yield, a .80 beta (showing low volatility), and other information investors might find pertinent, such as:

No scoring system is perfect, and I don’t take SSD as “gospel.” It’s just one of many resources I use to vet possible purchases for the IBP.

Still, as a DGI practitioner, it’s comforting when legitimate research confirms that our chosen companies have strong dividends.

Although building a reliable, growing income stream is the IBP’s main mission, the portfolio’s Business Plan notes that “solid total return” is a secondary goal.

Here is some relevant, performance-related information (all data is as of market close on the second quarter’s final trading day, June 29, 2018): 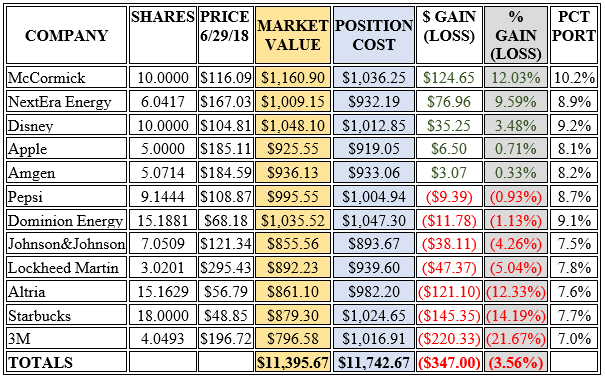 While NextEra was our only company to experience a total-return gain in Q1, five are up after two quarters. Amgen, the IBP’s very first position, suffered nearly a 9% loss in Q1 but rebounded to post a 9% gain in Q2 and get into the green overall.

NEE continued to be a nice performer, and I’m also encouraged by relative IBP newcomers McCormick and Disney.

On June 28, a month after we bought it, MKC issued a fantastic earnings report that led to its price zooming higher. 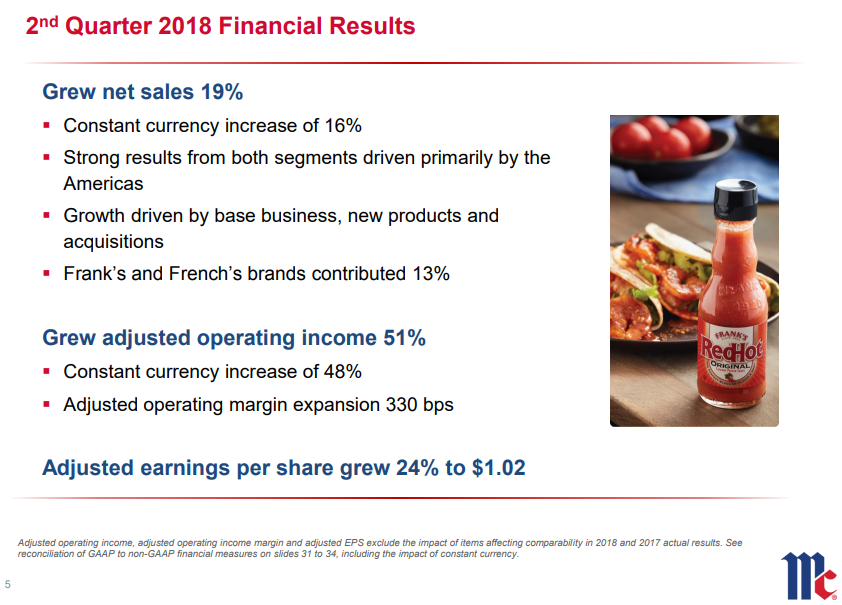 Disney has been on a roll at theater box offices, and it recently received Justice Department approval for its $71 billion acquisition of Twenty-First Century Fox (FOX). (Shareholders from both companies still must approve the deal.)

Things weren’t quite as rosy for 3M, Altria and Starbucks, as those three double-digit laggards caused the IBP to finish the first half of the year in the red.

MMM and other multinational industrial companies have been hurt by Donald Trump’s tariff war.

MO’s price plummeted 17% from April 18-26 after a poor earnings report from its international arm, Philip Morris (PM). Altria has recovered some but remains well down.

Starbucks announced after market close on June 19 that it anticipated only 1% growth in global comparable-store sales next quarter, sending the price down 9% the next day. 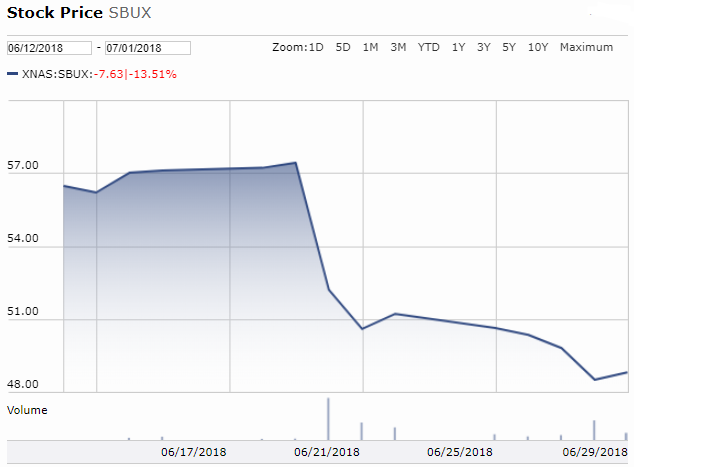 The IBP had added SBUX only one week earlier … and such a rapid loss is never fun for any investor.

In addition to SBUX, a few other IBP companies appear to be undervalued, including DIS, JNJ and MO.

Despite having outperformed the S&P 500 Index since the IBP added it on April 10, Disney has attractive valuation metrics across the board. 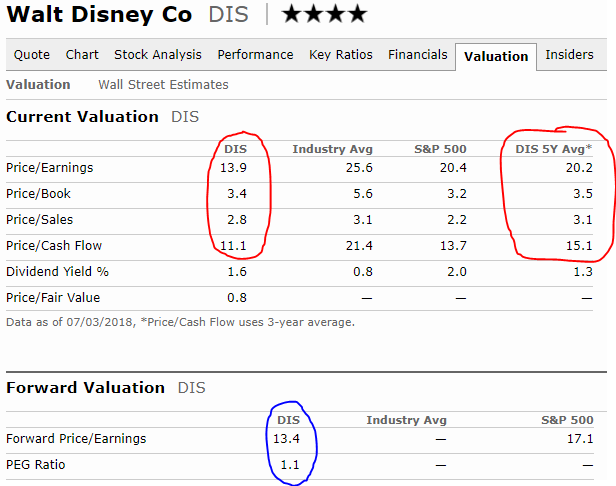 Johnson & Johnson, one of the most popular holdings in the DGI universe, has a P/E ratio lower than its 20-year average (red circled areas on the FAST Graphs illustration below). It has been nearly three years since JNJ’s multiple was as low (purple circle). 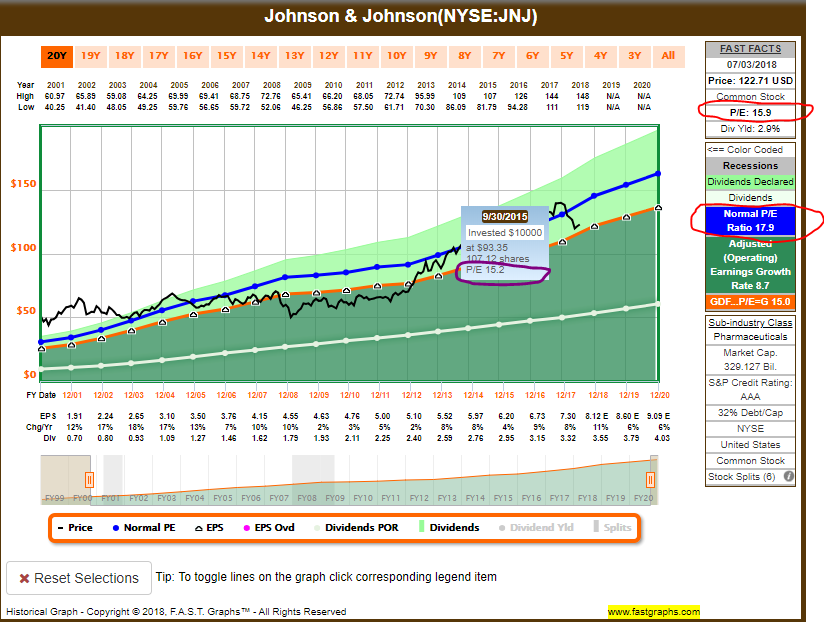 No wonder JNJ was my Daily Trade Alert colleague Dave Van Knapp’s Dividend Growth Stock of the Month for June.

If an investor believes in Altria’s “story” — in other words, he or she thinks the company can continue growing despite the gradual decline in smoking — MO’s valuation is pretty compelling, as this table from Dave’s April 27 article indicates:

In addition to those undervalued possibilities, one could argue that PEP, AMGN, D, LMT, MMM and AAPL are fairly valued.

A few days ago, my boss Greg Patrick (also a fellow DTA contributor) texted to say he is “loving the portfolio and picks.” I was glad to hear that, but I told him I wished MMM and SBUX hadn’t seen their prices tank shortly after we had bought them.

“That’s fine with me. I’m in it for the long haul! And hopefully people following the IBP understand that.”

I hope so, too, and it goes beyond the Income Builder Portfolio. All DGI practitioners should realize it is a long-term strategy for patient investors.

If you want to get rich quickly, you need to choose a different strategy … and also be prepared to get poor quickly if things go sour.

I’m thrilled with the IBP’s income growth so far. And given the quality of our holdings, I expect great performance in the years ahead.