There are 2 minutes left in a 3-point game, and the opponent has the football. The fans, trying to inspire their team, rock the stadium with the familiar chant: 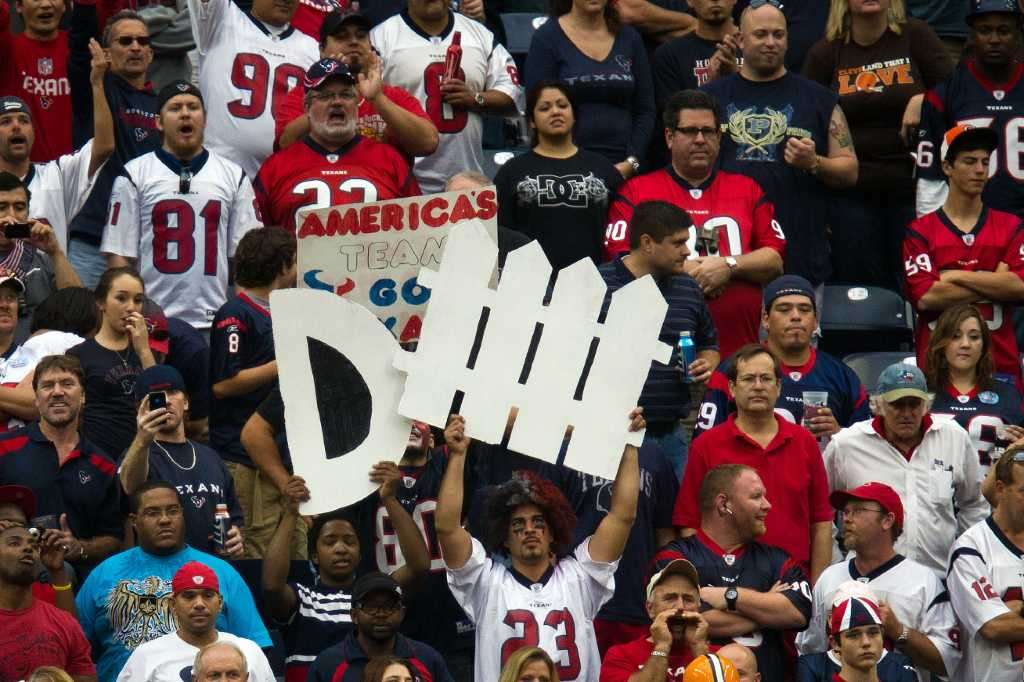 As an investor, I am fairly aggressive, as the majority of my holdings are individual stocks. Some of my companies, however, are defensive in nature. When the stock market goes down, those companies tend to hold their own. It’s all part of building a diversified portfolio.

One business I have long admired is McCormick & Co. (MKC), the world’s dominant brand in spices, and I have decided to make it the 10th position in the Income Builder Portfolio.

Come Tuesday, May 29, after the Memorial Day holiday, I will execute an MKC purchase order on behalf of Daily Trade Alert.

Whether times are good or bad, folks want to add a little dash to their foods. For convenience, it’s hard to beat McCormick’s spices, sauces and such. We have at least a dozen of the company’s products in our pantry right now. 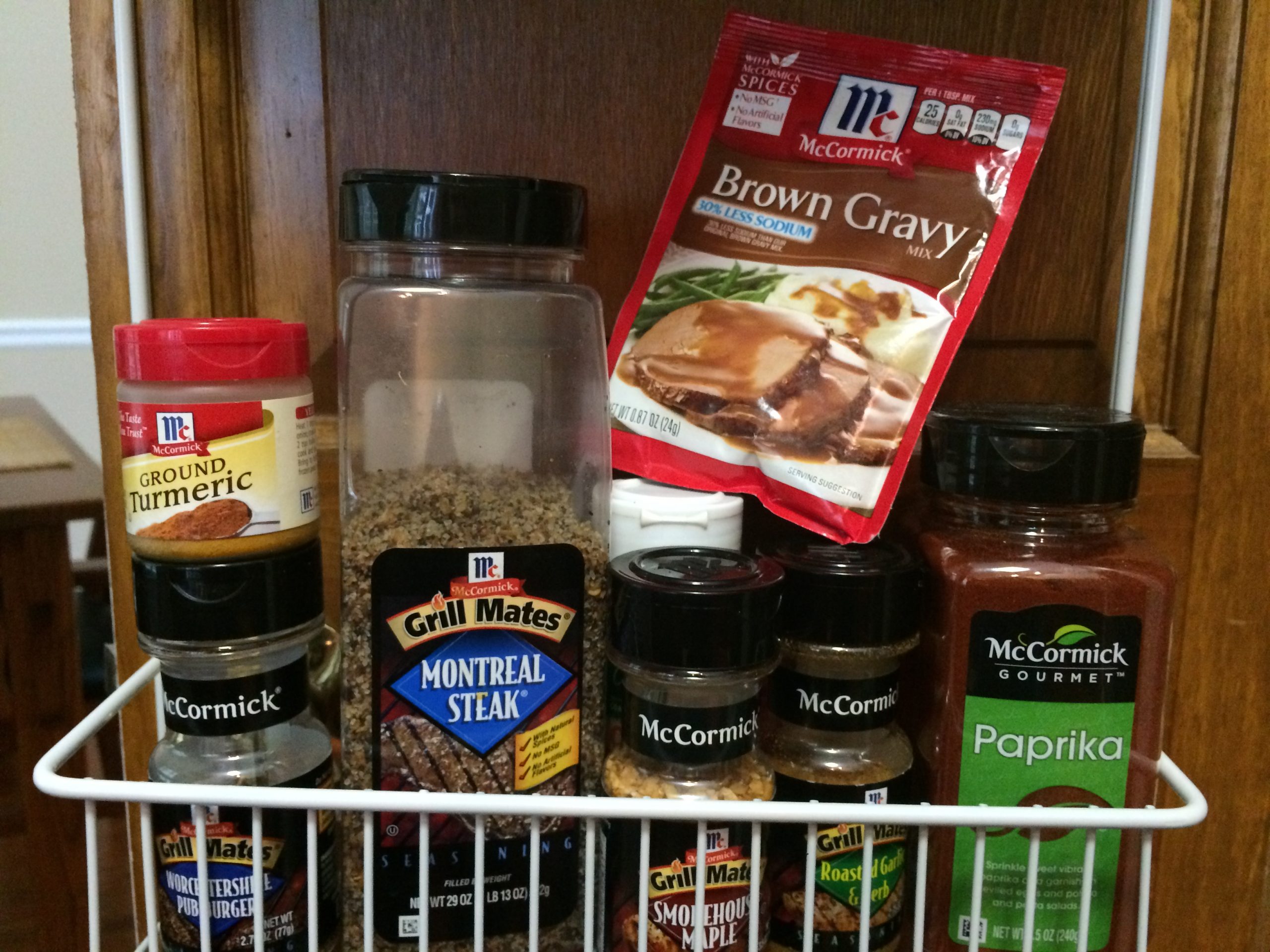 An actual shelf in my actual pantry

Here are some interesting facts about how McCormick, the stock, performed during some infamously horrific stock-market stretches:

You get the idea, right? We’re talking about better defense than Bill Russell in his prime.

With McCormick, there must be a price to pay for all that defense, no?

In other words, with a company such as McCormick, one willingly gives up some potential gains during bull runs in exchange for the security of mitigating losses during bear markets. And in the end, MKC is a long-term winner. 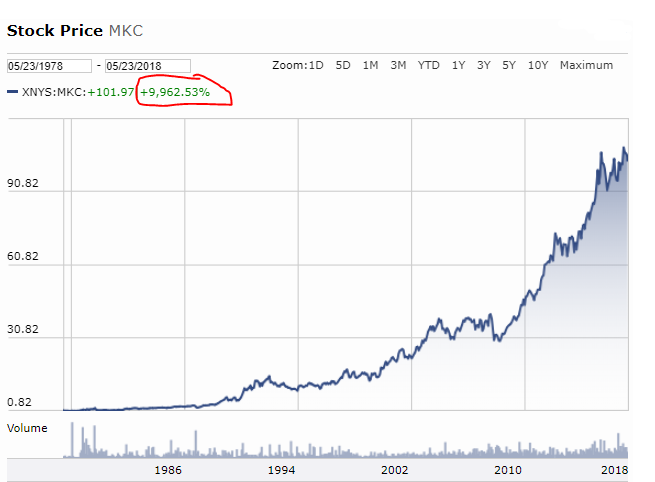 Yes, you see that correctly in the above Morningstar graphic: MKC has gained about 10,000% over the last 40 years.

Showing Up Their Peers

OK, so that’s some of McCormick’s history. What about more recent stuff? Hey, I’m glad I asked!

The last several months, the consumer staples sector has taken it on the chin. Rising treasury rates, competition and other factors have resulted in painful returns for prepared-foods, household-products, beverage and even tobacco companies. 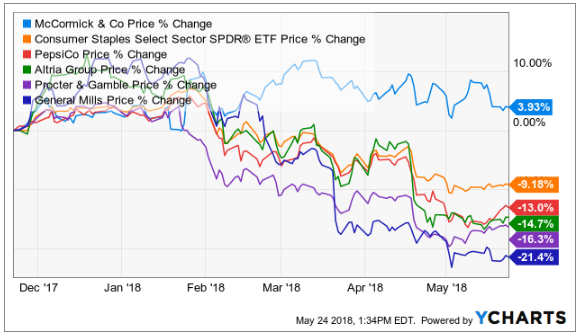 Take a good look at the above graphic from YCharts. While Pepsi (PEP), Altria (MO), Procter & Gamble (PG) and General Mills (GIS) have lost between 13% and 22% the last six months, and while the Consumer Staples Select SPDR ETF (XLP) has lost about 9% … MKC actually has gained nearly 4%.

So even within its own sector, MKC can play some pretty ferocious defense.

All right, now let’s talk a little about the company itself.

McCormick has about half of North America’s spice-and-seasoning market and one-fifth of the world’s business. It is by far the leading player in its industry.

It also is the industry’s leading supplier of private-label items. So you might think you are buying a “store brand,” but that quite possibly was McCormick, too.

Like Warren Buffett, I dig companies with “wide moats” — aka competitive economic advantages over rivals.

Here’s what Morningstar says about that:

We portend that McCormick has amassed a wide economic moat stemming from its leading brands, solid relationships with retailers, and a relative cost edge, which enable it to sustain leading market share across the spices, seasoning, and food flavoring aisle and generate solid returns and cash flow for shareholders. And we anticipate it will generate excess economic profits for at least the next 20 years, supporting our contention.

McCormick had an outstanding 2017, with sales growth of 8% in the consumer segment and 12% in the flavor solutions segment. Earnings per share grew 13%.

That all is par for the course. The following FAST Graphs illustration shows that McCormick has grown its earnings every year this millennium. 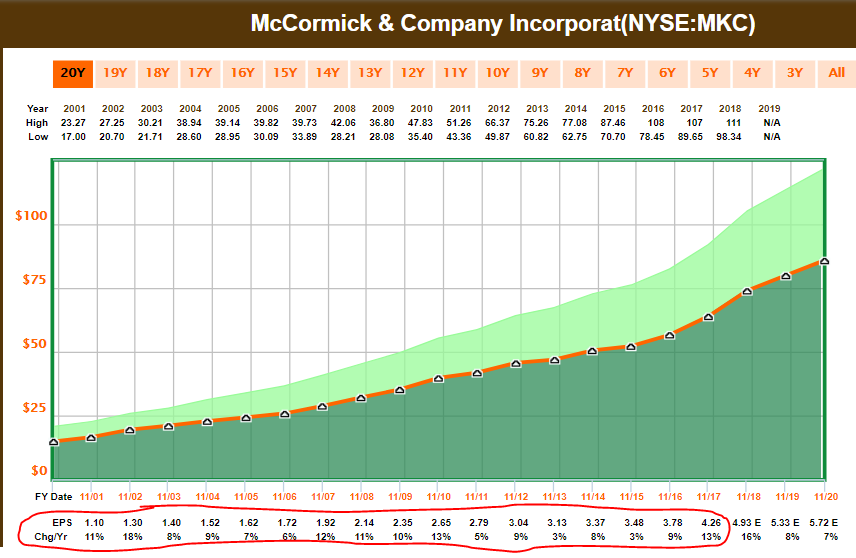 One reason McCormick isn’t in some Dividend Growth Investing portfolios is that its yield is relatively low at 2%. 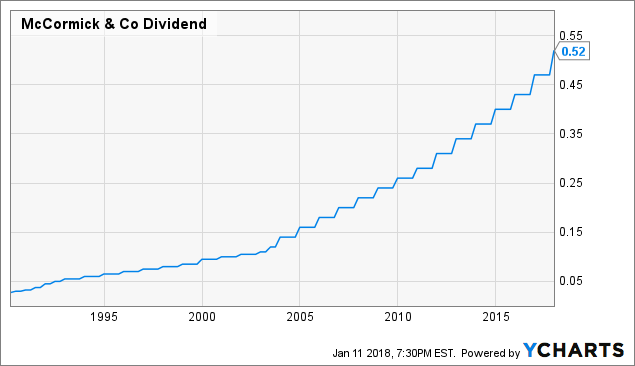 With a low payout ratio, good free cash flow and growing earnings, McCormick should be able to keep increasing its dividend by about 10% annually for many years to come.

No company is risk-free — not even a defensive stalwart such as McCormick, which can be hurt by upticks in commodity prices and swings in foreign-exchange rates.

Also, the company has taken on more debt lately, especially after paying $4.2 billion last year to buy the British company that made Frank’s RedHot Sauce and French’s Mustard. Some analysts believe MKC overpaid for an unnecessary acquisition.

In McCormick’s most recent earnings report, CEO Lawrence Kurzius said the company is committed to paying down debt and will use some of its windfall from the U.S. tax reform law to do it. MKC also is on track to reduce costs by $400 million over a 4-year stretch.

If I wanted a consumer staples stock for the IBP, why go for one that has not come down in price? After all, companies such as Kraft Heinz (KHC), Campbell Soup (CPB), and Kimberly-Clark (KMB) have been beaten down, and all have much higher yields.

Well, because I consider McCormick a superior “all-weather” performer, and I also believe in MKC’s continued growth going forward.

I certainly might add a KHC or PG or GIS to the Income Builder Portfolio eventually. But for now, I’m going with a company that plays defense like few others — and ain’t half-bad on offense, either. Kind of the Deion Sanders of consumer staples. 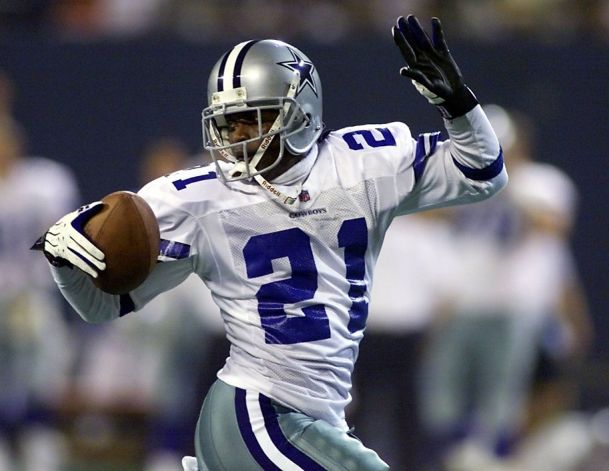 My article about the execution of our MKC purchase, along with some pertinent valuation information, will be published Wednesday, May 30.