Back when I worked a full-time job, I used to say how wonderful it would be if we got 48 weeks of vacation each year and only had to work 4 weeks, instead of vice versa.

“I’d be super-productive during those 4 weeks!” I would exclaim with a chuckle.

Having just returned from a 2-week vacation, I’m no longer so sure about that. I had a lot of fun, but all that “rest” wiped me out. Specifically, because we were in Mexico, all the cerveza and tequila wiped me out!

It wasn’t just any old vacation, either, as my daughter and son-in-law were celebrating their marriage.

Given that my son just got married in March, we had plenty of reasons to lift a glass (repeatedly) during our stay in Cabo San Lucas. Salud! 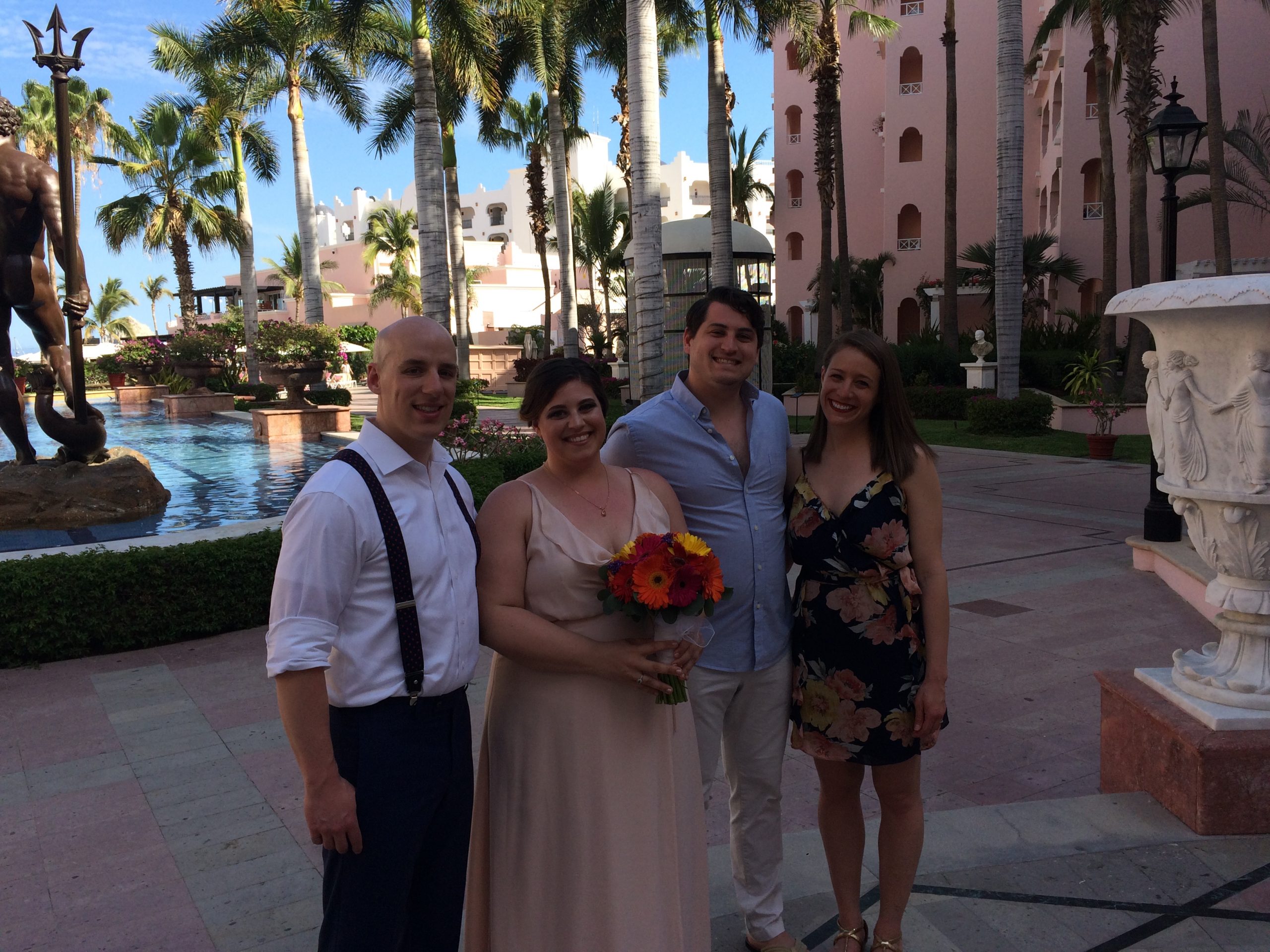 While south of the border with family and friends, I spent precious little time thinking about investing. Now that I’m back — the president couldn’t get Mexico to build his wall fast enough to keep me out — I have some catching up to do.

Later this week, I will select another company for the Income Builder Portfolio, the real-money, real-time Dividend Growth Investing project I am putting together for Daily Trade Alert.

The IBP owns 9 companies, courtesy of 9 purchases of about $1,000 apiece so far in 2018. That exemplifies how many DGI practitioners build their portfolios.

They choose to equally weight their positions, theorizing that if any one company cuts its dividend or — worst-case scenario — goes out of business entirely, it will have minimal impact on a 25- or 40- or 60-position portfolio.

Such portfolios look similar to this: 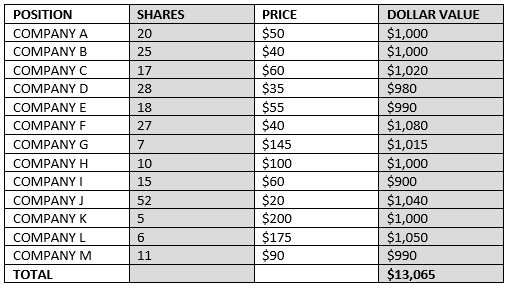 About the same amount of money goes into each position. Then, occasional rebalancing takes place: If one position grows too large, it is trimmed; if one is deemed too small, more shares are bought.

When a new stock is added, if the investor doesn’t have the money necessary to create an equally weighted position, he or she might make multiple buys over time until it reaches “full size.”

I started out that way with my personal portfolio, too. The more I invested and built up positions, however, the more I have used a different strategy when it comes to weighting the 46 companies I own.

For one thing, as a DGI proponent, my focus is on building a reliable, growing income stream that will complement our Social Security and pensions when my wife and I retire.

Therefore, I consider it prudent to weight positions by expected dividends rather than dollar value.

For another thing, I don’t “like” (for lack of better word) every company I own equally.

Each has a different role.

Some are core holdings; I have supreme confidence in them and doubt I’ll ever sell them.

Some are more speculative and/or are there to give the portfolio a little income boost. Some are “growthier” names with lower dividend yields.

The best way to illustrate my methods is to show what I own, and I do exactly that in the following three tables. (While the percentage of each position is accurate, the income and value figures have been changed to protect my privacy.) 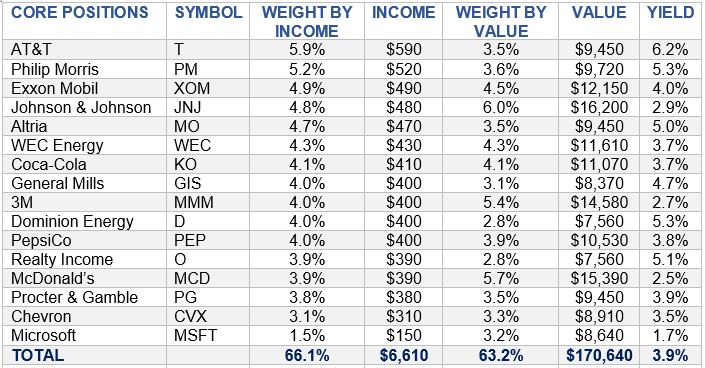 The 16 Core Positions above are the companies I have great confidence in, especially with respect to their dividends.

Most of the positions are built out, but I am still doing a little buying. And because I reinvest dividends (drip) back into all of them, I am always buying a little more of each every few months.

You can see that these 16 positions supply nearly two-thirds of my income stream (66.1%). 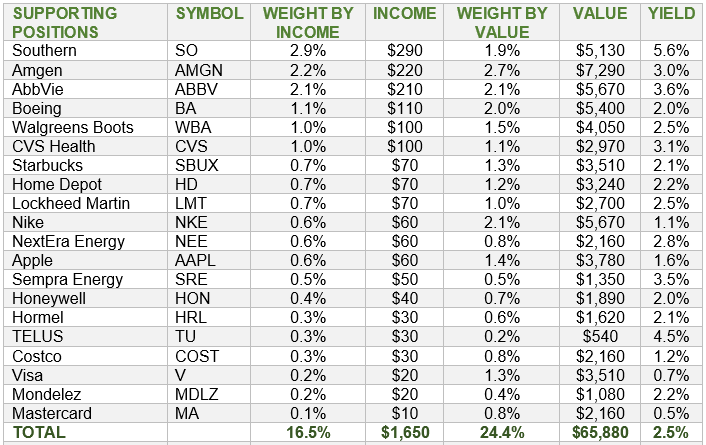 Most of the 20 Supporting Companies above are lower yielders. Therefore, while they make up nearly one-quarter the value of my portfolio (24.4%), they combine to provide only about one-sixth of the income (16.5%).

Many are considered growth companies, rather than income plays, including well-known brands such as Nike, Apple, Costco, Visa and Mastercard. Although they don’t help my dividend stream very much, they have excellent dividend growth.

They also have produced superb price appreciation. I realize that to monetize them for retirement spending, I might have to sell shares rather than simply use their dividends.

A few companies have been “promoted” from Supporting to Core positions; that usually happens when I keep building them and they attain a certain size. As much as I like Mastercard, it would be difficult for me to claim it’s a “core” position when it is only a tiny fraction of my portfolio.

The 10 companies above are generally higher yielders and, for one reason or another, are more speculative in my mind.

For example, Ventas, Welltower and Omega are healthcare REITs, which are out of favor due to rising treasury rates and other factors.

Main Street is a business development company that lends money mostly to small companies that can’t secure funds from banks. I happen to think it’s the creme de la creme in its industry, but it nonetheless faces risks inherent to all BDCs.

Kinder Morgan, an oil and gas pipeline company, slashed its dividend two years ago and is just now starting to grow it again.

Kraft Heinz and Qualcomm recently were “demoted” from Supporting positions because of various issues that concern me, making it unlikely that I will add to them in the near future.

I keep these 10 companies mostly to boost my overall portfolio yield, knowing full well that they are greater risks than others I own. That’s why they make up only 11% of my portfolio from a value standpoint. I could sell any of them at any time.

The last line in the third table (in purple) shows that I used a $10,000 annual dividend stream for this example. Given that my overall yield is about 3.7%, that put the relative value of the portfolio at $270,000.

The next-to-last line, labeled “Miscellaneous,” accounts for a few hundred dollars I have invested in each of several stocks as part of a model portfolio I’m building for a different project.

If I equally weighted my portfolio, I would have invested as much money in Kinder Morgan and Main Street as I did in Johnson & Johnson and Microsoft.

Doing so makes no sense to me.

KMI and MAIN are speculative operations whose very business models could be threatened by any number of factors. JNJ and MSFT are the world’s only AAA-credit-rated corporations; they will thrive for decades to come.

As a DGI practitioner looking to build a reliable, growing dividend stream, it’s a no-brainer to put more money into JNJ, MSFT and my other core positions. 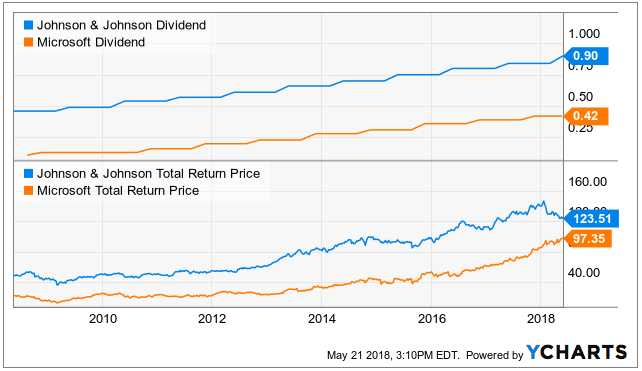 Look at it this way: If I invested the same hypothetical $16,200 in Omega as I have in Johnson & Johnson, OHI would produce more than $1,500 in annual income compared to JNJ’s slightly less than $500.

In other words, my portfolio would be counting on one of my lowest-quality holdings to provide more than three times as much income as arguably my highest-quality position.

That seems silly at best, financially dangerous at worst.

I tend to look at my portfolio as if it were a team … and on any team, each player has his or her unique role.

Like many other prepared-food companies, General Mills is going through a rough patch right now. But GIS has been paying dividends for 119 years without interruption or reduction, and I remain confident that the company will continue to perform its role for my portfolio.

Meanwhile, I have given the likes of Apple, Visa and Mastercard different “assignments.” Not only do I demand more rapid dividend growth, but I expect significant capital appreciation. So far, so good! 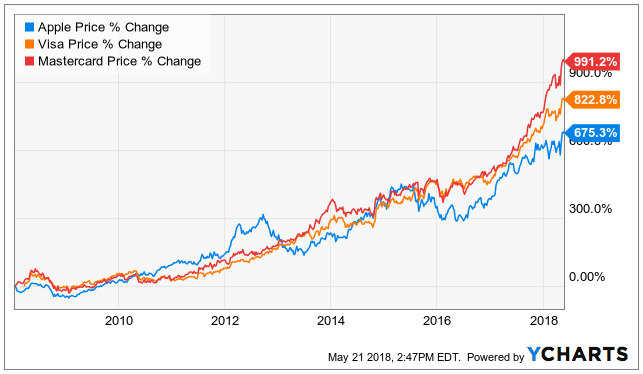 I am only in my 50s, not my 90s, and I hope to have many more decades on this earth. Even as I build my income stream, I see no reason to ignore high-quality “growthier” companies.

Many of my Supporting positions are smaller because I am in the process of building them up. Because of their low yields, some will never provide a large percentage of my income.

As is the case with Home Depot, however, they are such outstanding companies that I simply want to own them. 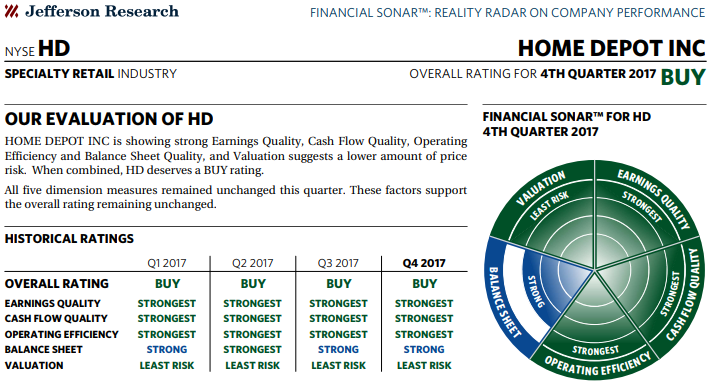 As I continue to construct the Income Builder Portfolio for DTA, I expect to use some of the principles discussed in this article.

Right now, with the IBP in its infancy, I am focusing on adding positions. As the portfolio gets built out, however, I will strengthen the holdings in which I have the most confidence.

Because IBP guidelines do not mandate rebalancing, stronger positions will grow organically. Also, as a DGI endeavor, income always will be a major consideration.

Years from now, some positions will be twice or three times the size of others … and I wouldn’t have it any other way.

Our next Income Builder Portfolio stock will be revealed on Saturday, May 26.