If you have been investing in stocks for some time, you have made mistakes. We all have.

One of my biggies: Back in 2012, not long after I decided Dividend Growth Investing was the right strategy for me, I identified Lockheed Martin (LMT) as a worthy addition to my portfolio. I put in my limit order to buy a nice chunk of the stock at $80 per share.

Although the easy (and smart) thing would have been to just buy it somewhere a little north of $80, I was determined to prove I was “disciplined” (more like stubborn).

Well, LMT never hit $80 for me, and I missed out on owning a great company at an attractive price because I was quibbling over 14 stinkin’ cents.

Two years later, I began building a position in the world’s largest defense contractor … and let me tell you, I have paid considerably more than $80.14/share for each of my purchases since.

Lockheed Martin’s price has continued to go up like … well … one of its patented Guided MLRS Unitary Rockets. 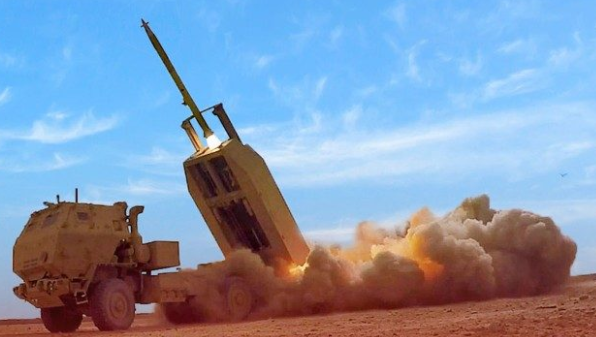 Finally, for reasons I mentioned in my previous article, the price recently began to come back to earth some. I thought this approximate 15% pullback was a good opportunity to add Lockheed Martin to DTA’s Income Builder Portfolio. 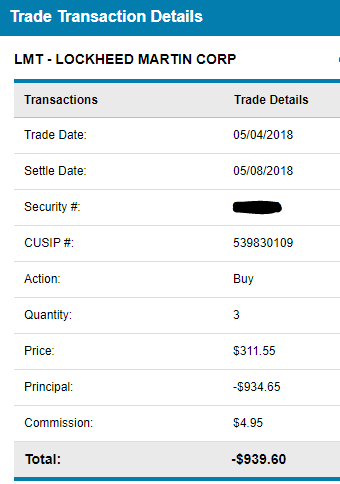 Daily Trade Alert allocates $2,000 per month for two buys, so we will have well over $1,000 available for our next May purchase.

There are many reasons for investors to consider Lockheed Martin. High on the list: 15 consecutive years of aggressive dividend growth.

Its most recent raise was only 9.9% (to $2 per quarter). Why do I say “only” 9.9%? Because that was the first time in the 15-year span LMT didn’t give shareholders a double-digit hike.

Seriously, it is comforting for DGI practitioners to know that every year LMT will come through. Even during the Great Recession, when some companies froze or cut dividends, Lockheed Martin’s payout was a beacon lighting up an otherwise dark tunnel.

Because this purchase was made before LMT’s next ex-dividend date (May 31), the IBP will receive $6 on June 22.

As mandated by the portfolio’s Business Plan, all dividends get reinvested right back into the companies from whence they came – a fee-free process informally called “dripping.” After buying LMT, I instructed the brokerage to “turn on the drip.”

If Lockheed Martin is trading at a similar price in June, the $6 received will buy .019 of a new share. Then, three months later, the IBP would get dividends based upon the new share total of 3.019 – making the September payment $6.04. In turn, that will buy another fraction of a share.

And in late September, expect the company to announce yet another healthy dividend increase. Gotta love it!

Depending upon the analyst conducting the research, Lockheed Martin is either fairly valued, somewhat overvalued or a little undervalued.

CFRA is very bullish, forecasting a potential 35% gain during the next year.

Ford Equity Research projects that LMT will “strongly outperform” the market during the rest of 2018 and into 2019.

Zacks has assigned Lockheed Martin a $369 target price – which isn’t that hard to imagine given that the stock hit $363 back in February.

An analyst for Argus has established a $385 target price for LMT.

With a forward P/E ratio of about 19, Lockheed Martin is pretty much fairly valued, says Morningstar. Its analyst has assigned a $318 price point.

The first graph encompasses the entirety of this millennium to show how a company can have long stretches of relative undervaluation (red U) and several years of overvaluation (silver O). The black line represents the price, and the blue line the normal P/E ratio. 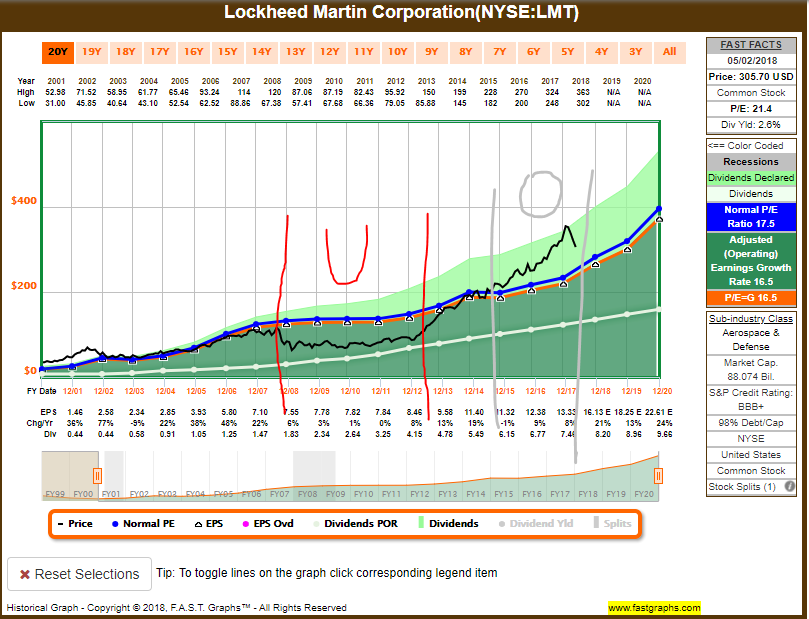 With this second illustration, I use a shorter time period, beginning just before the recession. When this span is used, LMT appears to be quite overvalued. 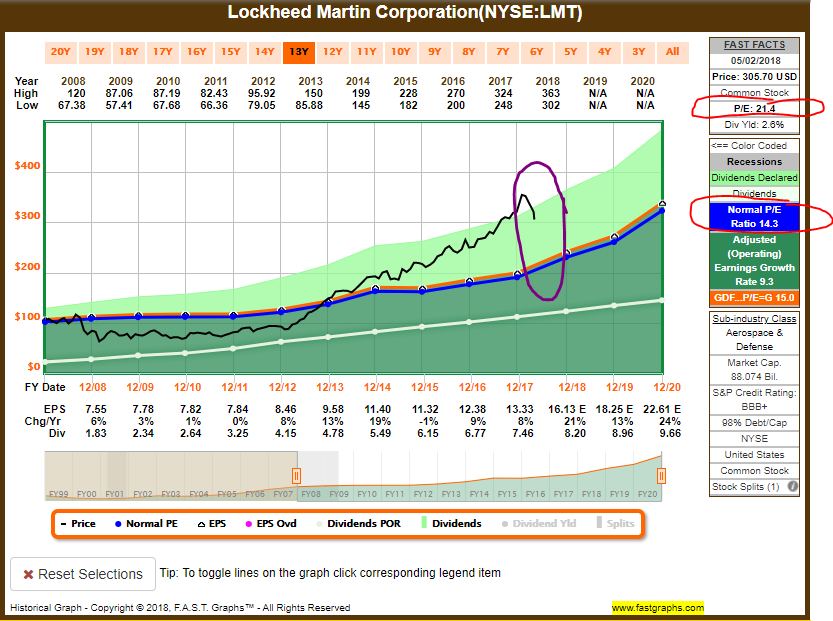 Looking at a briefer history, however, FAST Graphs shows LMT to be only slightly overvalued. 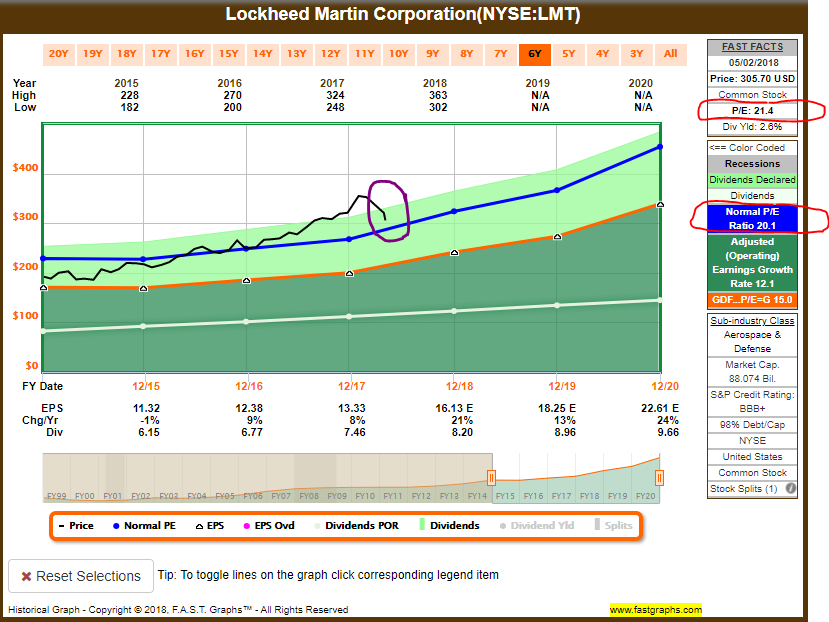 Given all the research presented, I’m playing it down the middle and calling Lockheed Martin fairly valued — and worth considering for investors seeking an excellent company at a decent price.

It’s hardly a “screaming buy,” and those who identify as value investors might want to wait for better opportunities.

As I learned back in 2012, though, better opportunities can be elusive.

I certainly am not claiming that will be the case this time; for all I know LMT’s price could go down $100 next week. I simply am saying I’m satisfied enough with its current valuation to pick up a few shares of this blue-chip, dividend-growing company for our Income Builder Portfolio.