Back in August, Donald Trump threatened to rain down “fire and fury” on North Korea. A month later, U.S. defense secretary James Mattis said aggressive acts by that country could lead to its  “total annihilation.”

And early this year, the president tweeted as only he can:

Thankfully, the rhetoric has calmed down ever since Kim reached out an olive branch to South Korea in the run-up to the Winter Olympics.

Last month, Kim pledged to bring about peace and to denuclearize the Korean peninsula. On April 27, he met South Korean President Moon Jae-in at the border between the nations, where much handshaking and hugging took place. 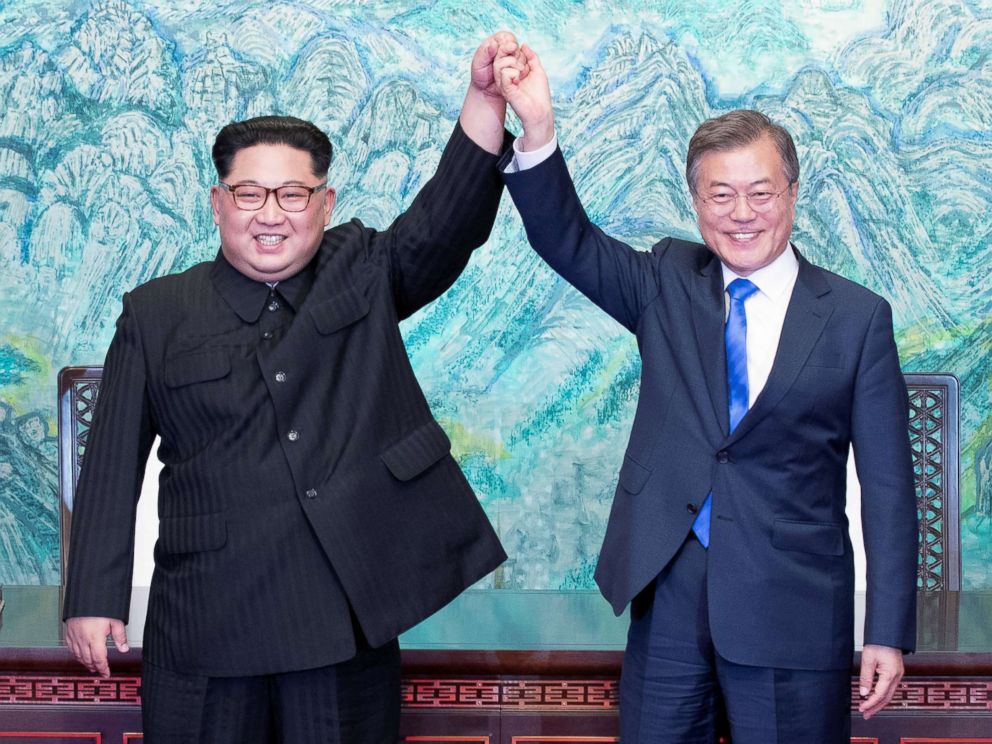 Kim Jong Un and Moon Jae-in meet in the truce village of Panmunjom inside the demilitarized zone separating the two Koreas. (Press pool photo via Reuters.)

In the next month or so, Trump is supposed to meet with Kim — the very guy the president angrily had dubbed “Little Rocket Man” when the two were comparing the sizes of their nuclear buttons.

Maybe you give total credit to the president for this diplomatic breakthrough, or maybe you think it’s happening despite him.

Whatever you believe matters little in the context of this article, which is not about Trump or Korea or politics at all.

It is about Lockheed Martin (LMT), which will become part of the Income Builder Portfolio that I am putting together for Daily Trade Alert.

On Friday, May 4, I will execute a purchase order for a few shares of the world’s largest defense contractor.

Approximately 60% of Lockheed Martin’s sales come from the U.S. Department of Defense, with the rest divided between other American government agencies and nations from around the world.

On its Web site, Lockheed Martin lists its products in alphabetical order. Here is just a sampling from the A’s:

War … This Is What It’s Good For

In a moment, I will make the financial case for investing in Lockheed Martin.

But for me it largely comes down to this:

World leaders spend an inordinate amount of time blowing up enemies, threatening to blow up enemies and activating defenses to keep enemies from blowing them up.

War is practically as old as humanity itself, and it will continue until long after everybody reading this article has returned to dust.

None of us has to like it … but as investors, we might as well profit from it.

More than half of the $1.3 trillion spending bill that Congress passed and Trump signed in March is going toward defense. As the Senate Defense Appropriations Committee said in its overview:

“Overall, this is the biggest year-to-year increase in defense funding in 15 years — a $61 billion increase over FY2017 enacted levels.”

A huge chunk of that money will find its way into Lockheed Martin’s coffers. For example, as the following press release shows, the Department of Defense just awarded LMT yet another big-bucks contract: 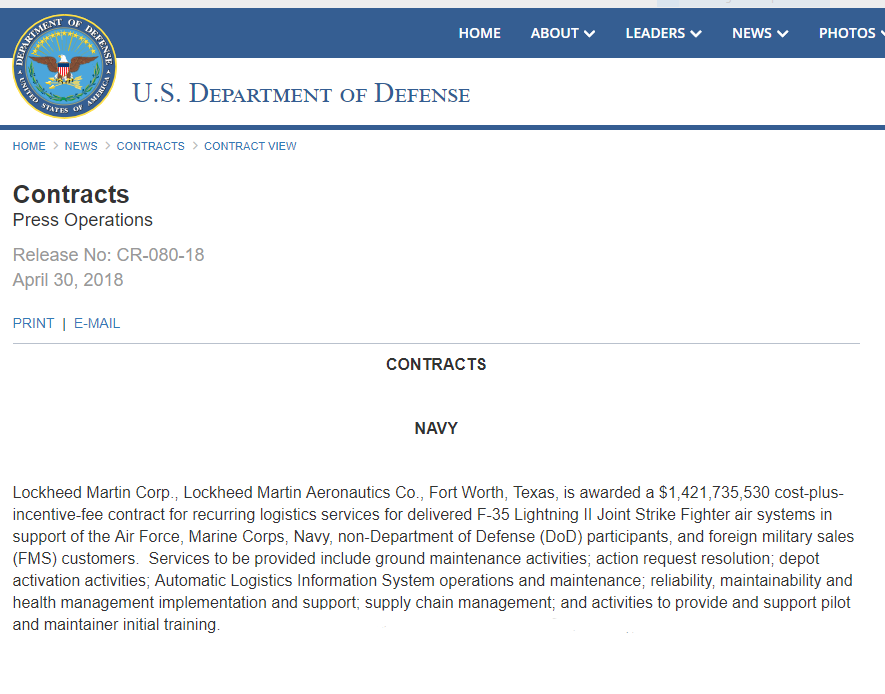 And there will be billions and billions (and billions) of dollars more coming Lockheed Martin’s way. Which leads us to …

As the following FAST Graphs illustration demonstrates, Lockheed Martin’s earnings have gone just about only one direction during this millennium. 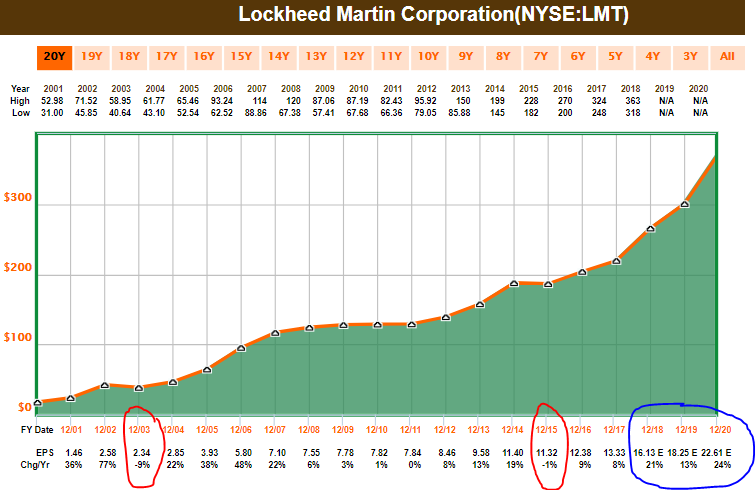 Companies with that kind of track record usually see nice share-price appreciation. That certainly has been the case for LMT — especially in the past 5 years.

As the above image from the calculator at Dividend Channel shows, a $10,000 LMT investment in May 2013 would be worth $36K today (with dividends reinvested) — almost twice the gain experienced by the S&P 500 Index (SPY) in the same span. 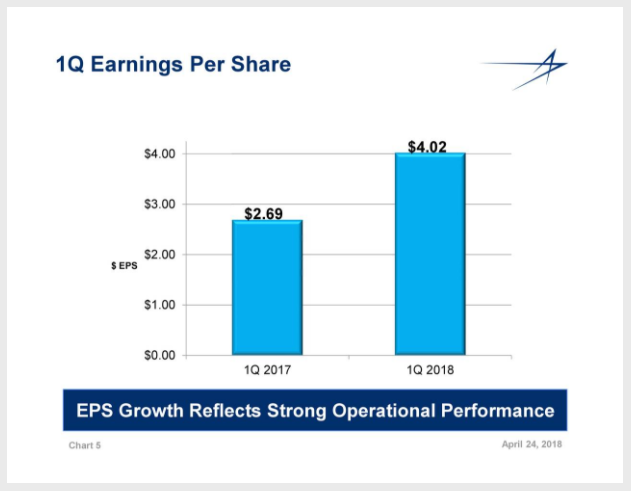 And as fine as prospects looked during its January report, the company significantly raised full-year 2018 guidance. 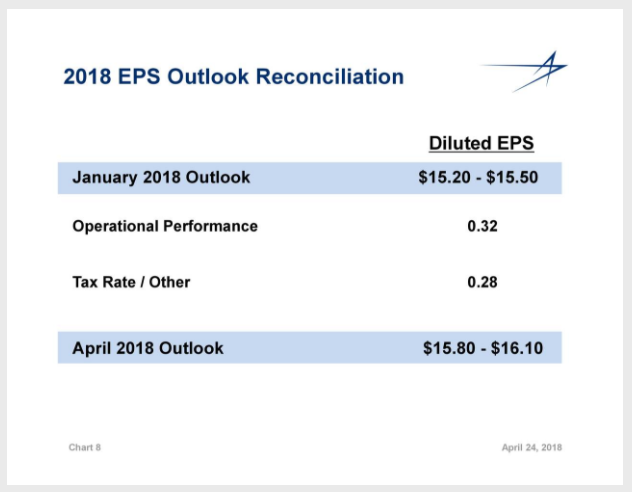 It’s not only about earnings, either. LMT also has upped its guidance for revenues, as shown in the following slide that features sales expectations for the company’s four divisions: 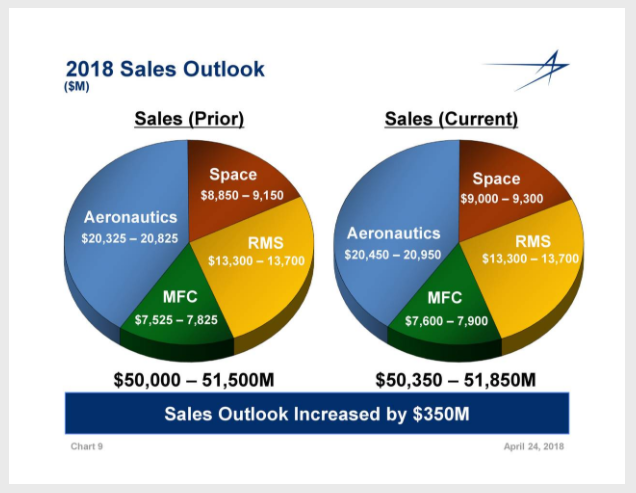 Analysts are confident that LMT can continue its winning ways for investors, as indicated by the following “Bullish” score from Thomson Reuters: 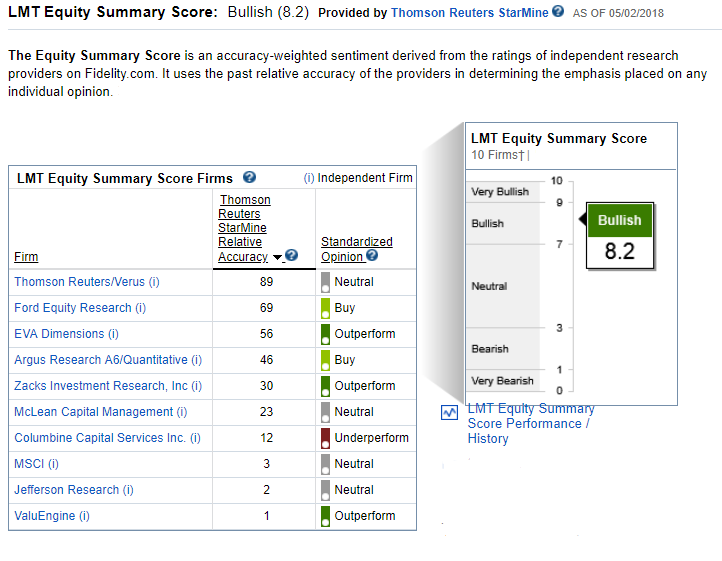 Given that our Income Builder Portfolio emphasizes Dividend Growth Investing, it should be no surprise that a huge attraction of Lockheed Martin is its commitment to consistently raising its payout to shareholders. 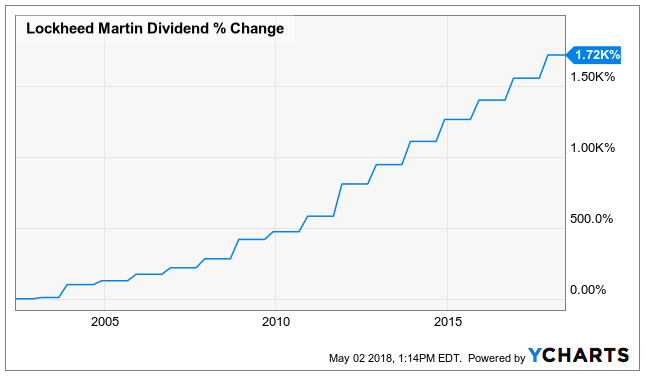 The company has raised its dividend each of the last 15 years — most recently a 10% hike from $1.82 per quarter to $2, which was announced last September and first paid in December. In four months or so, I fully expect another healthy increase.

Simply Safe Dividends gives LMT an excellent safety score of 85 (on a scale to 100). 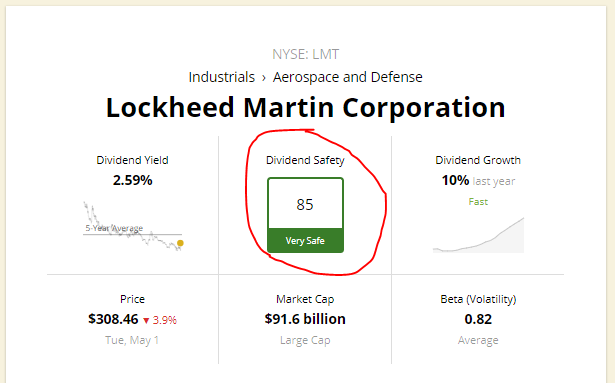 I will present detailed valuation information in my post-buy article, which Daily Trade Alert will publish on Saturday, May 5. What I will say today is that the recent pullback in Lockheed Martin’s price — from $362 to $302 in the space of just a few sessions — contributed to my decision to make it our next IBP purchase.

The sell-off largely was the result of LMT management not raising guidance for improved cash flow during the April 24 quarterly report, partly due to large pension contributions. There also is a dispute with Pentagon officials, who think fighter jets cost too much.

All of that combined with a general industrial-sector pullback due to tariffs and other geo-political concerns.

The sell-off looked overdone to me. LMT maintained strong cash-flow guidance of $3 billion for 2018. And CEO Marillyn Hewson promised a satisfactory resolution to the kerfuffle with the Pentagon.

Finally, even though the Blowing Stuff Up industry never really takes a day off, defense contractors sometimes face challenges forecasting their ability to deliver. As Morningstar analyst Chris Higgins states:

Nearly all U.S. defense contractors use long-term contract accounting, and Lockheed is no exception. Lockheed uses the percentage-of-completion method and typically uses costs incurred to date (cost-to-cost basis) to calculate the amount of revenue it recognizes. This percentage-of-completion approach requires significant judgment about revenue, costs, anticipated award incentives from the government, potential penalties, and a host of other factors. This means profit and loss may not accurately reflect future cash flows. 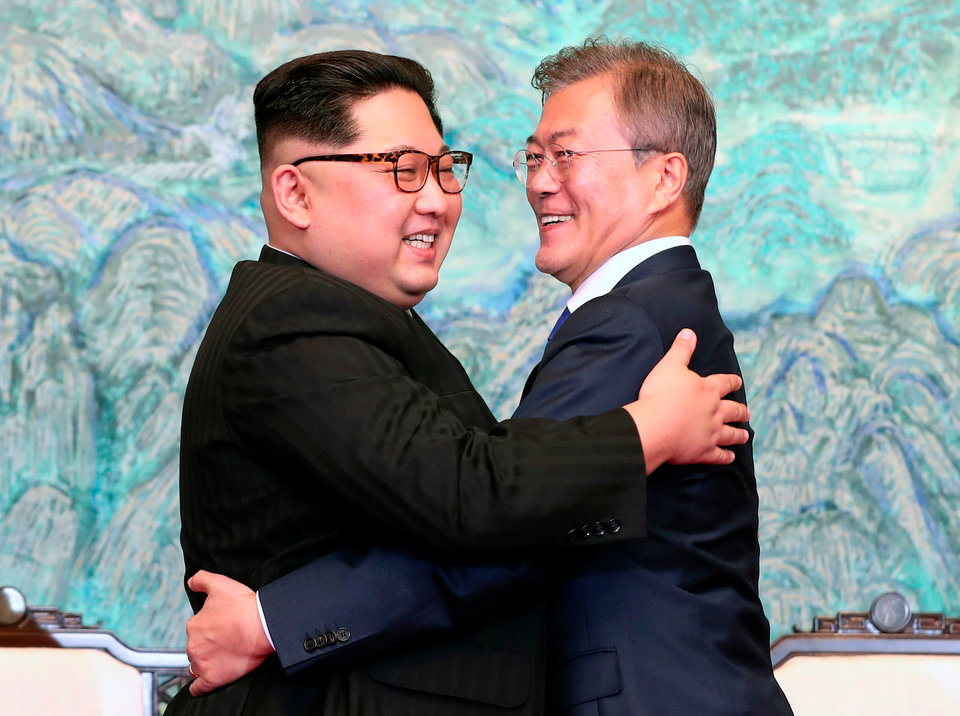 LMT investors should not worry about that, though. Even if everything turns out splendidly between the Koreas — as well as between Kim and Trump — there will always be other enemies to threaten with fire and fury.

DGI is a long-term strategy. And long-term, I think it’s hard to go wrong owning shares of a well-run manufacturer of war machines. I hold Lockheed Martin in my personal portfolio, and I look forward to the IBP having it, too.

As always, I urge potential investors to conduct their own thorough due diligence.