1962 was a remarkable year, and not only because yours truly was the remarkable subject of this remarkable newspaper article: 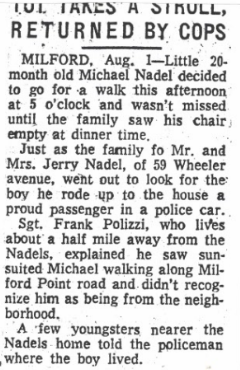 Hey, a kid’s gotta take a stroll without a stroller eventually, no? So I wasn’t quite 2 yet … I was a quick study, and I had places to go!

Anyway, ’62 was even better known for: 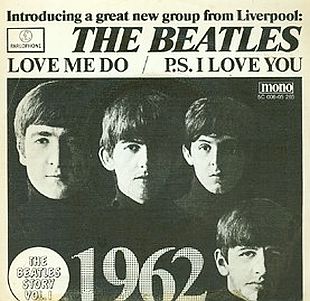 Oh, and 1962 also was the last time Johnson & Johnson (JNJ) did not raise its dividend from the previous year.

In the 55 years since, the maker of Rolaids, Dermabond and Remicade — and hundreds of other consumer, medical-device and pharmaceutical products — has increased its payout to shareholders year after year after year.

There are plenty of reasons to like Johnson & Johnson as an investment, and I detailed many in my previous article.

But for Dividend Growth Investing practitioners like me, it’s hard to beat the consistency, reliability and strength of the growing income stream that JNJ produces.

So it should be little wonder that I decided to add the company to DTA’s Income Builder Portfolio. 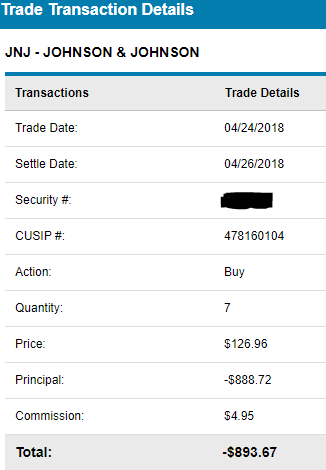 Daily Trade Alert provides $2,000 monthly for two IBP purchases. And because our April 10 buy of Disney (DIS) exceeded $1,000, it left us with less than that for the JNJ transaction. That’s OK – I imagine we’ll increase the size of our position many times over the years.

Although the company’s 2018 increase — marking its 56th straight year of growth — was expected to be revealed any day now, Johnson & Johnson’s dividend was still 84 cents per quarter as of this writing.

Conservatively, I project a raise of at least 4 cents, which would bring the annual dividend to $3.52 and the yield to 2.8%. That new .88 quarterly payout would bring $6.16 to the IBP in June.

As mandated by the portfolio’s Business Plan, all dividends get reinvested right back into the same companies – a fee-free process informally called “dripping.” After buying Johnson & Johnson, I instructed the brokerage to “turn on the drip”:

Come June, if JNJ is still trading at about $127, the $6.16 dividend would buy .049 shares. Three months later, the Income Builder Portfolio would get divvies based upon the new share total of 7.049 – making the September payment $6.20. That, in turn, would buy another fraction of a share.

And so on and so on, like clockwork, quarter after quarter, year after year, decade after decade.

It’s what makes JNJ the quintessential DGI stock, and a perfect addition to the Income Builder Portfolio.

Morningstar’s estimate is $130, just a tick above our price.

Value Line’s “Relative P/E” for JNJ is 1.02 (red circled area in clip below), meaning the company’s P/E ratio is right about at the average of the 1,700 stocks VL analyzes. Additionally, they forecast price appreciation of approximately 33% to 65% (green circle) over the next 3-5 years.

CFRA’s target price for JNJ over the next year is $170, meaning they are projecting a possible 33% gain.

Ford Equity Research doesn’t give an estimated value, but as the highlighted area of the clip below shows, they believe JNJ will outperform in the near term.

Finally, we’ll use three FAST Graphs illustrations to demonstrate how tricky it can be to find an “accurate” valuation for a company.

FAST Graphs uses something called “blended P/E ratio,” a combination of the trailing 12-month P/E and the projected year-ahead ratio. They calculate JNJ’s figure at 16.8, which is shown in the green circled area of each illustration.

However, by changing how far we look back, we get three different valuation pictures.

In the first illustration, immediately below, we used a long time frame that showed a “Normal P/E” of 17.9 (red circle). The end of the black price line falls below the blue normal line (purple circle), indicating slight undervaluation. 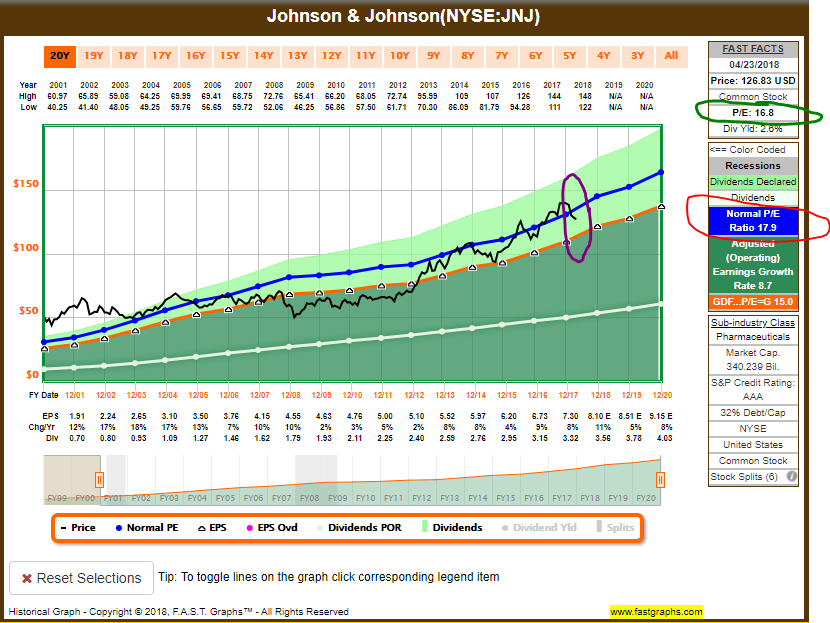 In the following illustration, we shortened the time frame to just before the recession, which cut the Normal P/E to 15.3 (red circle). The end of the black price line doesn’t reach the blue normal line (purple circle), indicating slight overvaluation. 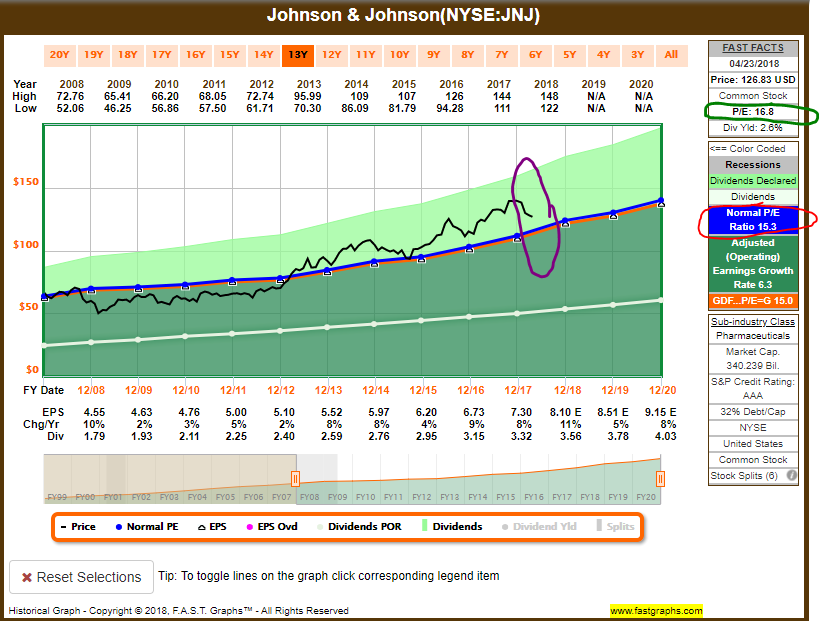 And in the third illustration, we shortened the time frame even further, and the the Normal P/E rose to 17.0 (red circle). The end of the black price line now just touches the normal line (purple circle), indicating the “Baby Bear” valuation – just right! 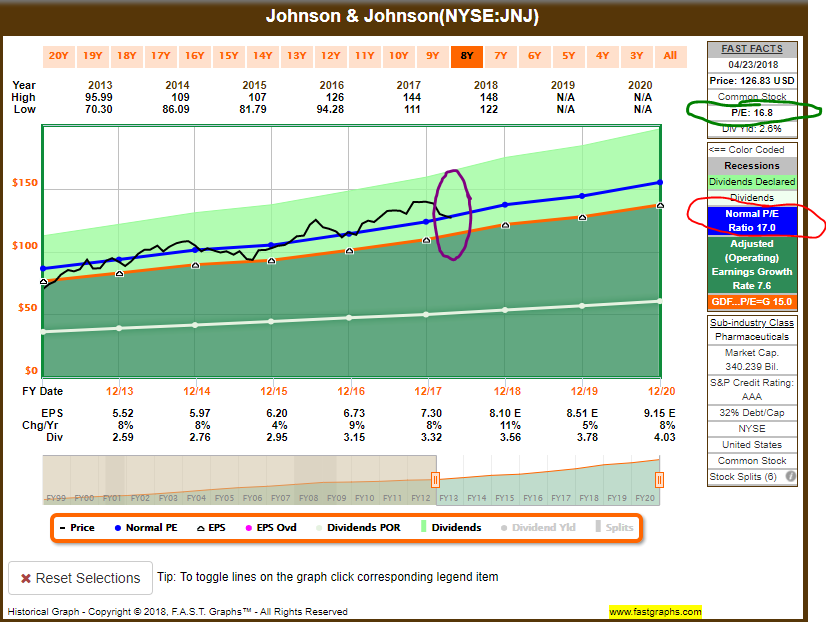 When I use FAST Graphs, I like to look at all kinds of time frames to see how significant the variations can be. Sometimes, there are big differences and I have to decide which is most indicative of a company’s normal pattern.

In Johnson & Johnson’s case, the differences seem immaterial. I believe FAST Graphs shows JNJ to be just about fairly valued. I am happy to buy one of the world’s best companies at such a point.

Johnson & Johnson is now the IBP’s eighth position, and it joins Amgen (AMGN) as one of our  two companies in the health care sector. I obviously consider both to be outstanding long-term investments.

While Amgen is a relative newcomer to the dividend-growing universe, with a streak of only 8 years, JNJ became a DGI stock decades before anybody even knew the strategy had a name.

I sure wish I had broken into my piggy bank before I toddled away from home back in 1962. Then I could have made it to a broker and bought some Johnson & Johnson!

Disclosure: JNJ is the largest position I own, making up about 6% of my personal portfolio.