Several years ago, I was among a group of financial writers who was asked this question:

If you had $25,000 to invest TODAY on one company and you planned to hold it for 10 years or more, which company would you buy?

As I compared one stock to another, ran oodles of numbers and read as many reports as I could handle, I kept going back to the same name:

I admit that my personal experience factored into my answer, as JNJ has been a good investment for me over the years. It is my largest position, making up about 6% of my personal portfolio.

And now it’s the Income Builder Portfolio’s turn to get some, too.

With the stock market pulling back in recent weeks, it’s a good opportunity to add the world’s No. 1 health-care conglomerate to the IBP.

Come Tuesday, April 24, I will be using about $1,000 of Daily Trade Alert’s money to execute a buy order. JNJ will be the eighth position in the real-time Dividend Growth Investing portfolio we are building from scratch.

The long-term nature of DGI always keeps me coming back to JNJ.

Visine will be squirted into red eyes, and Nicorette will be chewed in hopes of preventing black lung. Breaths will be freshened with Listerine, and skin will be softened with Lubriderm.

Last night’s revelers will be this morning’s Tylenol takers, and allergy sufferers will pop Benadryl to quell sneezing and sniffling.

As years advance, ladies will use Neutrogena Rapid Wrinkle Repair, and men will turn to Rogaine. The clock is always ticking, and that’s the bald truth!

All of those iconic brands I just named are from JNJ’s Consumer segment – which, believe it or not, is the smallest of the company’s three main divisions.

Pharmaceuticals is the largest business, producing nearly half of JNJ’s revenues. That’s followed by Medical Devices, which contributes about a third of the company’s sales.

Rather than throw a bunch of dry facts and figures out there, here is a slide from Johnson & Johnson’s 2018 first-quarter earnings presentation, which took place Tuesday, April 17. It recounts each division’s year-over-year growth and includes a statement from CEO Alex Gorsky. 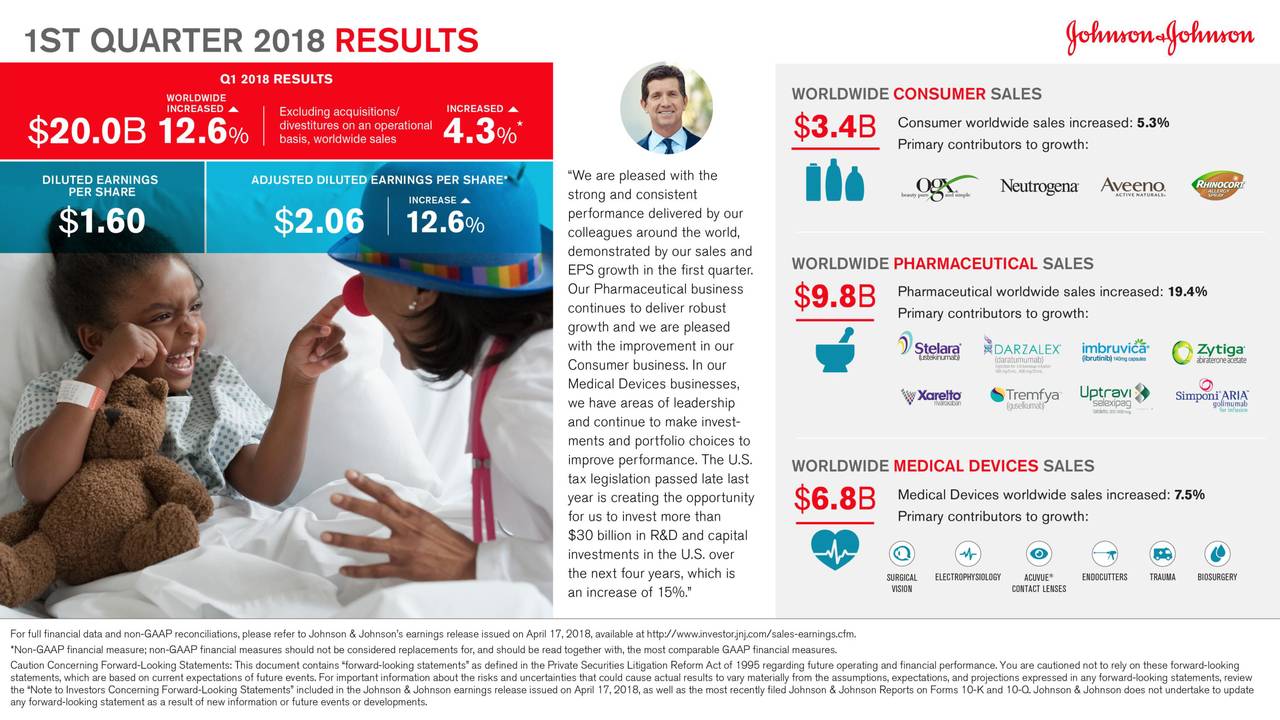 JNJ is not a “safe” investment. No stock is “safe,” and I hate it when financial writers use that word.

Having said that, JNJ — one of only two companies to receive Standard & Poor’s AAA credit rating — has proven to be dependable and consistent. For DGI practitioners, that means something.

Take a look at JNJ’s earnings per share over the last two decades, as shown on this FAST Graphs illustration. 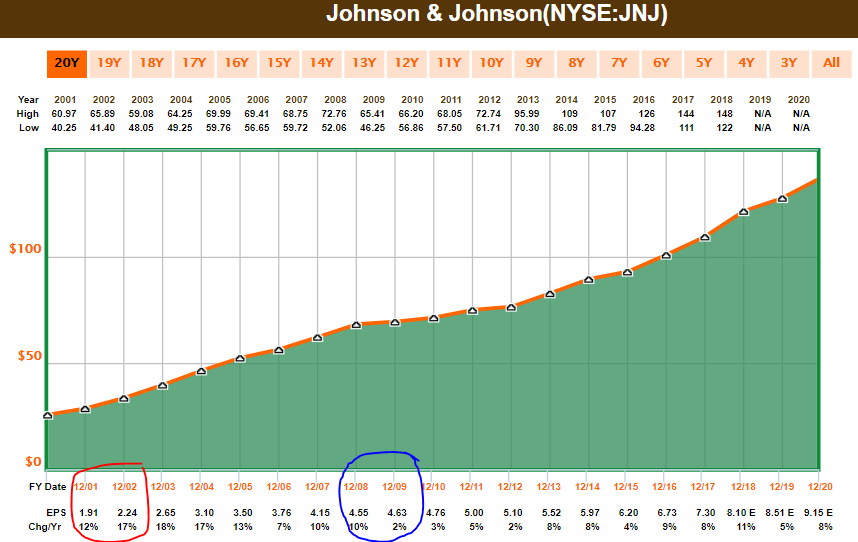 The EPS line goes only one direction – up, in a consistent, gradual climb. Even during the dot-com bust (red circled area) and the Great Recession (blue), Johnson & Johnson did not suffer earnings declines.

That illustration doesn’t even do JNJ justice. The company actually has had 34 consecutive years of EPS growth.

The last year in which Johnson & Johnson failed to grow earnings, 1983, Duke was wrapping up an 11-17 season under a relatively unknown, young basketball coach named Mike Krzyzewski. I think it’s safe to say both JNJ and Coach K have done OK in the decades since. 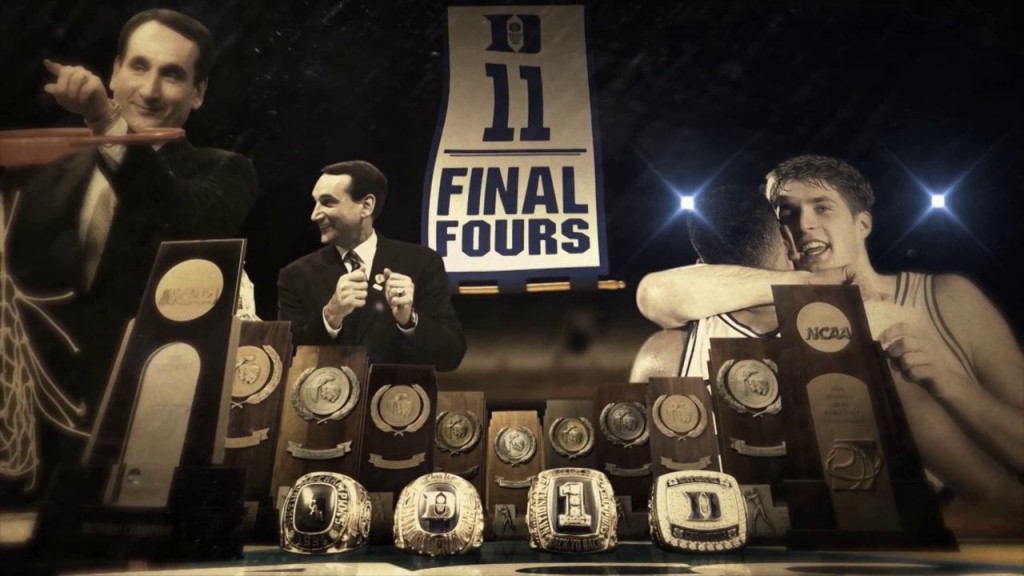 As comforting as it is to review history, investing — like basketball — is a forward-looking game. So it’s even more comforting to see JNJ project earnings growth of about 10-12% and sales growth of 6-7% for 2018. 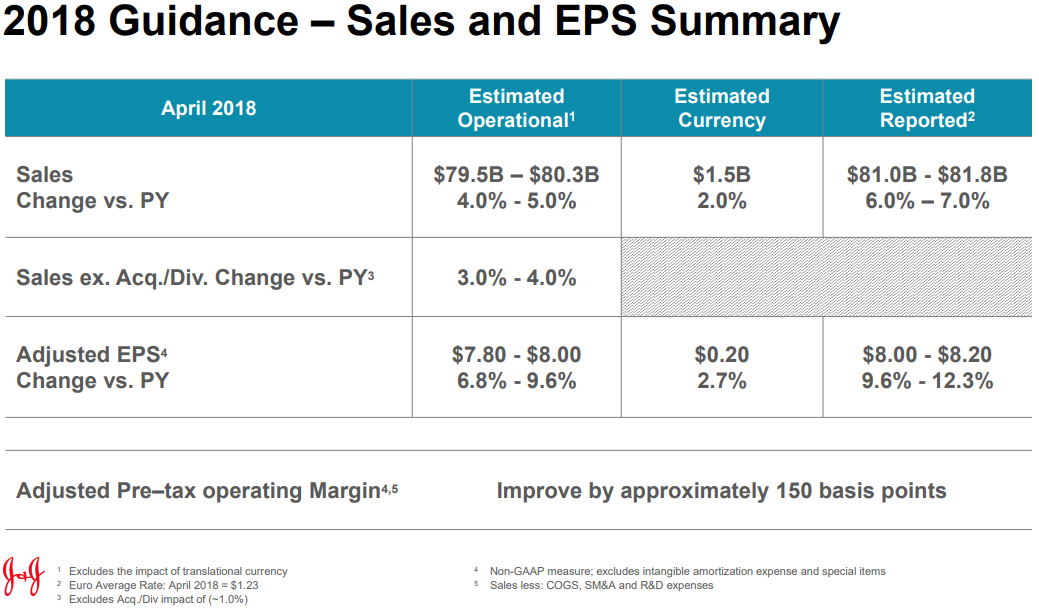 Because no DGI portfolio is complete without JNJ, I knew the company would join the IBP eventually.

Johnson & Johnson has grown its annual dividend for 55 consecutive years, one of the longest streaks out there, and No. 56 is expected to be announced before the end of the month.

The “JNJ Dividend Staircase” is one of the prettiest sights for any DGI practitioner.

Obviously, this company is strongly committed to helping investors build a growing income stream. Dominic Caruso, who will be retiring this year as JNJ’s chief finance officer, said this during Tuesday’s earnings call with analysts:

Some of the J&J successes that I’m very proud to have been associated with in partnership with my finance team and J&J colleagues include a consistent capital allocation strategy, where after investing in our business at competitive levels, we allocate capital first by paying dividends to our shareholders, then deploying capital for value creating acquisitions and finally using any excess cash to further return capital to shareholders such as through share repurchases. 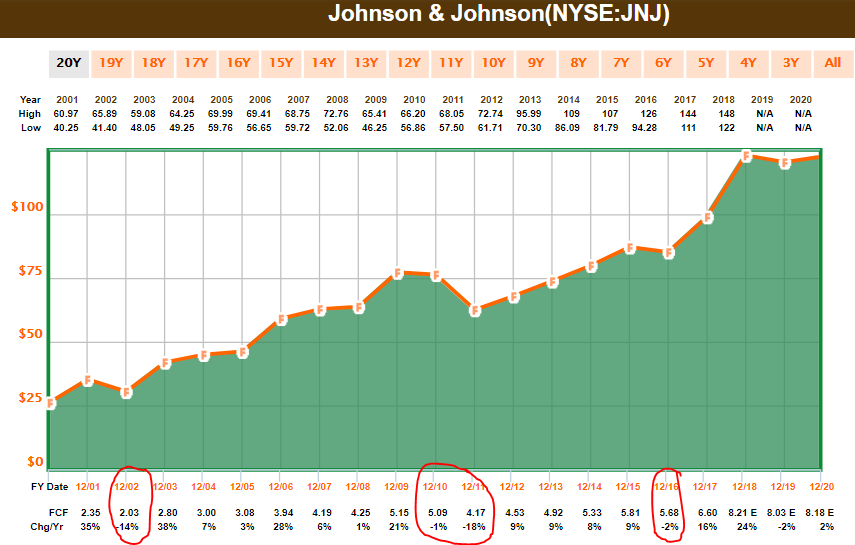 As I said earlier, JNJ is not a “safe” stock. It faces plenty of challenges.

Profits from its Consumer division have been slowly trending downward, as shoppers ask questions such as: “Why should I buy Johnson’s Baby Shampoo when I can pick up the store brand for half the price?”

Pharmaceuticals and Medical Devices are expensive and insanely competitive industries. There also are several active lawsuits against JNJ, part of the cost of doing business in this environment.

Here is a quick risk synopsis from the analysts at Morningstar:

Johnson & Johnson needs to overcome several roadblocks, including remaining litigation surrounding central nervous system drug Risperdal, talcum powder, surgical mesh products, and metal-on-metal hip and knee implants and several product recalls that could damage its sterling reputation. Over the longer term, the company faces typical healthcare risks such as reduced pricing power from both governments and pharmacy benefit managers, regulatory delays, and nonapprovals as well as increasingly aggressive generic competition for both small-molecule drugs and biologics. In particular, the biosimilar risk to Remicade is increasing, with several biosimilars working to gain market share.

Finally, as impressive as JNJ’s earnings reports have been over the years, EPS is a metric that can be manipulated and massaged by companies. Many analysts believe Johnson & Johnson is better than most at always putting earnings in a positive light.

Despite the challenges, it’s easy to see why Johnson & Johnson is the quintessential DGI company.

As an investor, I can’t tell you whether any company’s share price will be higher or lower next year or next decade. But I am about 99.9% certain that JNJ still will be growing its dividend.

My next article, to be published on Wednesday, April 25, will detail our purchase. It also will look at the company’s valuation and other pertinent information.