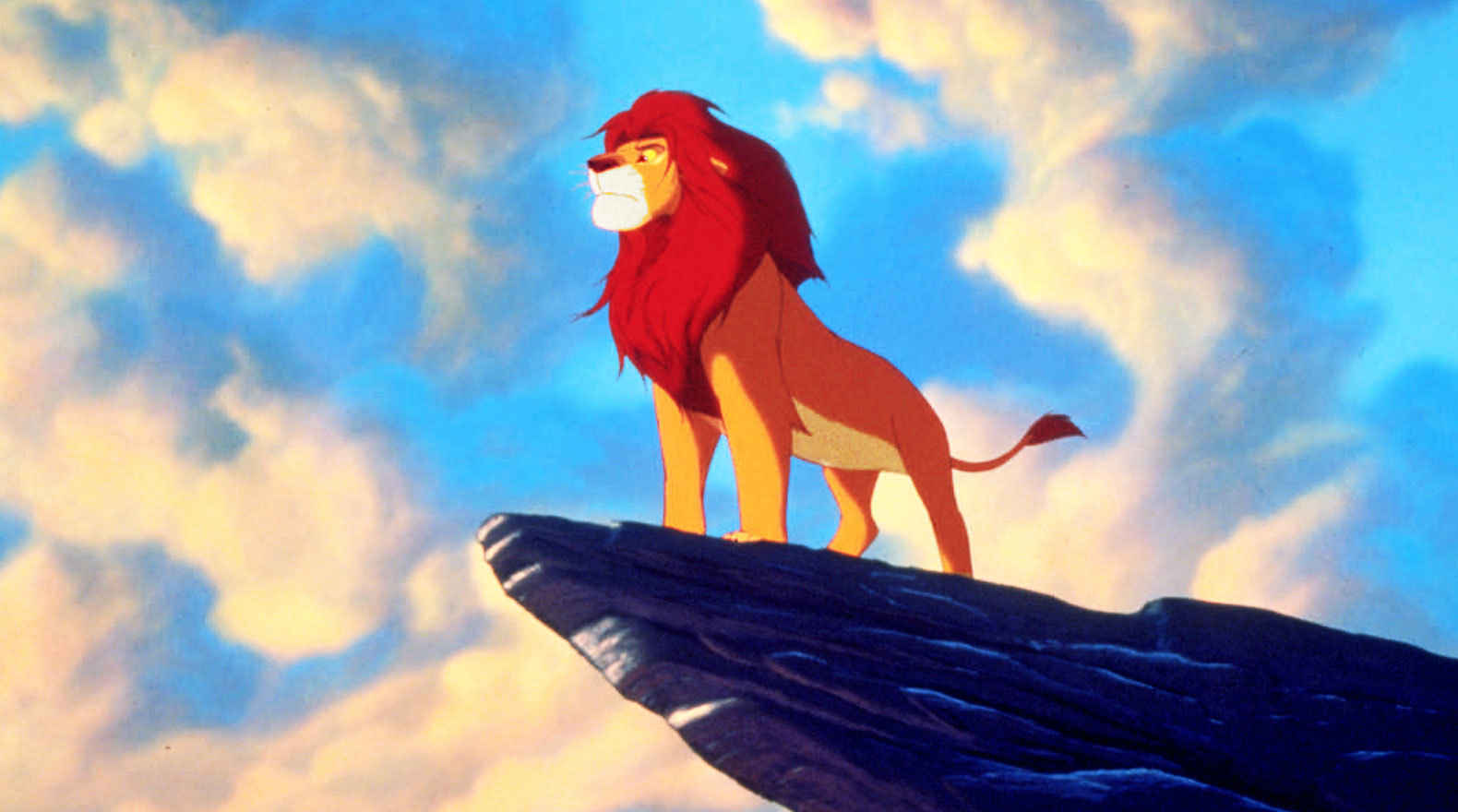 (From the Lion King gallery at disney.com)

World-wide theme parks that thrill and delight (and seamlessly pitch the film and TV content). Toys, video games, apparel (and so much more) that serve as showcases for the likes of Darth Vader, Spiderman and, of course, Mickey Mouse.

Nobody does content better than Disney (DIS), and we’re thrilled and delighted to have The King in the IBP. 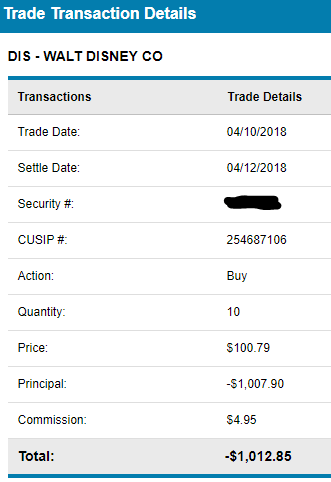 Because Daily Trade Alert allocates $2,000 per month for two trades, we will have $987.15 available for our second April buy in two weeks. 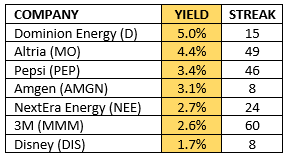 At 1.7%, Disney immediately becomes the IBP’s lowest-yielding company. It also has a modest 8-year streak of dividend raises.

Nevertheless, DIS has more than quadrupled its divvy over that time, from 35 cents in 2009 to $1.62 last year. And with a payout ratio of about 25%, Disney can keep growing its dividend aggressively for years to come.

One of the unique things (and annoying things to some Dividend Growth Investing practitioners) about Disney’s dividend is that the company distributes it only twice annually.

Come late July, I expect DIS to have raised its dividend well above the 84 cents of three months ago. Conservatively, let’s assume a 7% hike to 90 cents; at that rate, Disney will pay the IBP $9.00.

As mandated by the portfolio’s Business Plan, all dividends get reinvested to buy a partial share of the same company – a no-cost process informally called “dripping.” After making the DIS purchase, I instructed the brokerage to “turn on the drip.”

If Disney is still trading at about the price we paid Tuesday and if the dividend is indeed $0.90,  the $9.00 July dividend will buy .089 new shares for the Income Builder Portfolio.

In turn, that will buy another fraction of a share.

And that’s how a dividend stream gets built.

My previous article stated many of the reasons I’m bullish on The King of Content, and here’s another: As my late, great Uncle Moishe would have said, “Disney is such a deal!”

Even as its earnings have been increasing, Disney’s price has traded in a fairly narrow range between about $95 and $110 for most of the last year and a half. As a result, the company’s price/earnings ratio has dropped to near 14.

As the yellow-highlighted line from the following table from Morningstar shows, this is the lowest Disney’s P/E ratio has been since the recession. The red-circled area indicates that the 11.9 price/cash flow ratio is also at a multi-year low.

No wonder Morningstar considers Disney to be a bargain, as they have the company valued at  $130. Two other analysts, ValuEngine and Argus A6, assign DIS valuations of $114 and $129, respectively.

Meanwhile, as the following two clips show, CFRA has given Disney a $119.53 current valuation and a 12-month target price of $130. 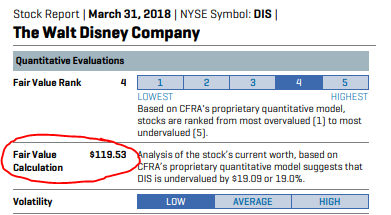 Value Line’s Relative P/E for Disney is under 1.00 (red circle in clip below), meaning the company’s P/E ratio is lower than the average of the 1,700 stocks VL analyzes. Additionally, they forecast price appreciation of about 20% to 45% (blue circle) over the next 3-5 years.

Finally, we can get all kinds of great valuation information using FAST Graphs.

The areas circled in red show that Disney’s “blended P/E ratio” of 15.6 is well below the 17.3 norm. If earnings per share increase by as much as the company projects (green circled area), it’s quite possible that the price would go along for the ride (green arrow). 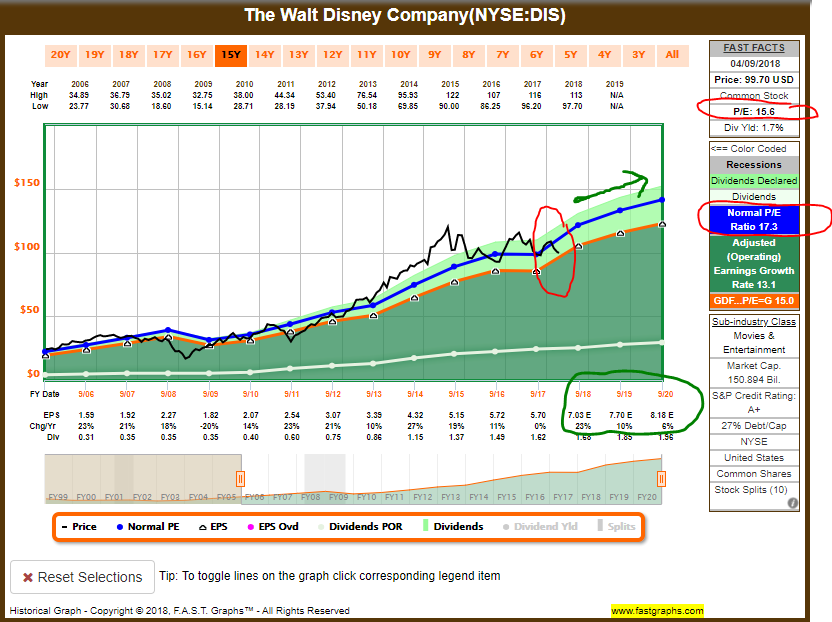 Disney is well-positioned within its industry, and I think it is only a matter of time before its price moves north again. Completing its acquisition of 21st Century Fox (FOX) by the end of 2018, as expected, could provide just the stimulus DIS needs.

Meanwhile, shareholders are getting paid dandy Disney divvies while they wait.

DGI is a strategy for patient investors, and I believe The King of Content will reward the Income Builder Portfolio for years to come.

Personally, I do not own Disney yet, but I definitely plan to get some when money becomes available in my account.

Fellow investors should conduct their own due diligence before buying DIS or any other company.