This month’s featured dividend growth stock is Hasbro (HAS).

Hasbro has been one of the most successful stocks in my Dividend Growth Portfolio. In the 5½ years I have owned it, it has advanced 125% in price. Not only that, it has delivered an additional 27% in the form of dividends.

So since September, 2012, when I purchased 52 shares, Hasbro has delivered 152% total return, or more than 18% compounded per year.

And that doesn’t count the benefits I have received from reinvesting those dividends into other stocks.

Hasbro has had a recent price drop, partly due to the announced closing of Toys R Us stores and lowered guidance by Hasbro for 2018.

That makes this an opportune time to highlight what has been, for me, one of my most successful investments in the last decade.

This is a really good dividend resume.

Hasbro’s yield of 3.0% just crosses over into the territory that I label “Good.” It is above my own minimum yield target of 2.7%, and it also qualifies as “enough” for most dividend growth investors. In comparison, the S&P 500 is yielding 1.9% at the moment.

Hasbro’s dividend increase record is impressive: 15 straight years of increases; 5-year dividend growth rate of 10.0% per year; and an increase of 10.5% this year. The ex-dividend date for the upcoming increase, payable in May, is April 30. Buyers who purchase the stock before that date will get the May dividend.

This display from Hasbro’s 2017 shareholder presentation illustrates Hasbro’s 10-year dividend record and underscores that the company considers its dividend a “capital priority.” 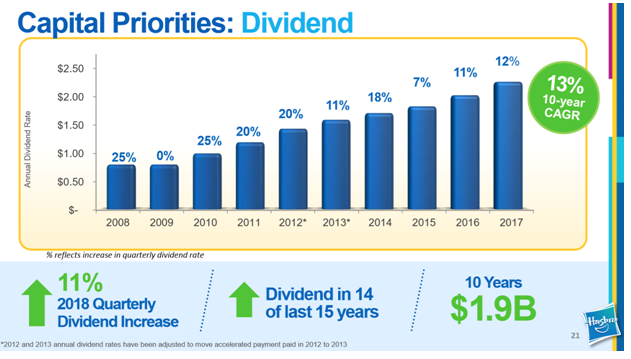 The dividend appears to be reliable. Hasbro gets dividend safety scores of 90 from Simply Safe Dividends and “B” from SafetyNet Pro. There is little risk of the company’s dividend being cut any time soon. (For more insight into dividend safety, see Dividend Growth Investing Lesson 17.)

Hasbro was founded in 1923 and is headquartered in Pawtucket, Rhode Island.

Hasbro is one of the world’s leading toy, play, leisure, and entertainment companies. It creates, markets, and sells products in the following categories, with some of its well-known brand names shown in parentheses.

Hasbro’s Entertainment and Licensing segment licenses properties and trademarks to third parties for use in digital gaming, consumer promotions, and noncompeting merchandise (such as apparel, publishing, home goods, and electronics). For example, Electronic Arts has licensed from Hasbro worldwide rights to create digital games for mobile phones, gaming consoles and PCs based on Monopoly, Scrabble, Yahtzee, Nerf, Tonka, and G.I. Joe. McDonald’s Monopoly annual promotion has been offered around the world since 1987.

In turn, Hasbro licenses rights from the creators of popular movies, TV, and comic book characters to create toys based on hot or long-lasting popular culture figures. Hasbro’s primary licensing agreements are with Marvel Characters for characters including Iron Man, Thor, Captain America, The Avengers, and Spider-Man; Lucas Licensing for the Star Wars brand; and Sesame Workshop for Sesame Street characters, including Elmo, Big Bird, and Cookie Monster.

Hasbro’s growth strategy is to build its core brands through development of innovative toys and games, entertainment offerings, and licensed products. In addition, continued international expansion is part of the growth strategy, with focus on China, Brazil, Peru, Colombia, Russia, Korea, Romania, and the Czech Republic.

In addition, Hasbro seeks to expand awareness of its brands through entertainment experiences such as TV and movies. Hasbro owns a 40% interest in a joint venture with Discovery Communications, which operates The Hub, a children’s and family television network. Hasbro Studios creates and develops TV programming based mainly on its brands.

Hasbro depends on retailers to distribute the majority of its products to consumers. In 2016, Wal-Mart, Toys R Us, and Target accounted for approximately 16%, 9%, and 9%, respectively, of the company’s net revenues. The recently announced bankruptcy of Toys R Us is one of the reasons for Hasbro’s recent price decline.

Another headwind facing Hasbro is that many children are moving away from traditional toys and games at a younger age. That has resulted in increasing competition from makers of video games and consumer electronic products.

Hasbro’s credit rating is on the low end of S&P’s spectrum of investment-grade ratings. The company stated in its most recent investor presentation that it is committed to maintaining its investment grade rating and access to the commercial paper market.

Hasbro gets an “A” financial grade from Value Line, which is good but not in their highest categories (A+ and A++). My analysis indicates that this is a fair grade, although I might have given a slightly higher rating.

There are several financial categories that I focus on when examining a company. Let’s go through them for Hasbro.

Return on Equity (ROE) is a standard measure of efficiency in a company. It indicates how much return a company is generating per dollar invested in it. Per Bloomberg, the average ROE of the 10 largest companies in the S&P 500 is 19%. The following chart shows Hasbro’s ROE in recent years.

Earnings – that is, a company’s officially reported profits – are always of interest. The important version of earnings to track is Earnings per Share (EPS), because that shows “your share” of the company’s total profits. Your share depends not only on the company’s total earnings but also on how many shares you own compared to the total number that are outstanding.

Hasbro’s earnings have been consistently positive over the past 10 years, and they have shown growth in 7 of the 10 years. Once again, that is a solid record.

That said, 2018 earnings are presently forecast to decline slightly, then pick up growth again the following year.

Free Cash Flow (FCF) is the cash a company has left over after paying its expenses. Excess cash flows allow a company to pursue investment opportunities, make acquisitions, repurchase shares, and pay/increase dividends. As with earnings, the significant number to examine is the per-share amount.

Hasbro has generated positive FCF per share over the past 10 years. The closest it came to the zero line was in 2009 during the Great Recession. The strong cash flow record is one of the major reasons that Hasbro’s dividend is considered to be safe, as dividends are paid out of cash flow.

A company’s Debt-to-Capital (D/C) ratio measures its financial leverage: How much does the company depend on borrowed money to finance its activities? Most companies borrow money routinely, financing their operations through a mixture of debt and equity (shares sold on the open market) as well as their own cash flows.

While leverage can help a company grow faster, too much debt can weaken a company or even make its financial structure untenable. The D/C ratio examines how big a percentage of the mixture of debt and equity is debt. All else equal, the higher the D/C ratio, the riskier the company is. Debt must be paid back, so debt repayments create a constant draw on the company’s cash flows.

Hasbro’s D/C ratio is around 50%, meaning that it finances itself about half with debt and half with capital. This is a typical D/C ratio for companies across the board. After raising its debt to that level during the Great Recession, Hasbro has basically maintained it in that general area over the past 8 years.

My 4-step process for valuing companies is described in Dividend Growth Investing Lesson 11: Valuation. Let’s go through the steps for Hasbro.

The basic valuation estimate uses a reference price-to-earnings (P/E) ratio of 15 multiplied by the company’s earnings, which is shown by the orange line on the following chart. P/E x E = P, so the orange line shows what would be a fair price for Hasbro. 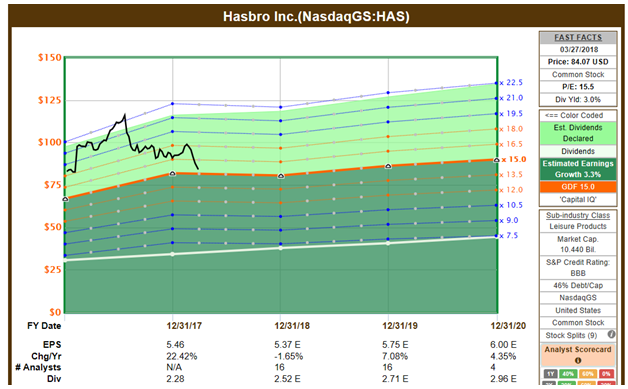 Hasbro’s price is slightly above the orange line, suggesting that the company is slightly overvalued.

The orange line was drawn using the reference P/E of 15, whereas Hasbro’s actual P/E is 15.5. If we make a ratio out of those P/Es, we can calculate the degree of overvaluation: 15.5 / 15 = 1.03. In other words, Hasbro’s current price is 3% above the fair price as calculated by this first method.

That suggests that the fair price is $82 under this approach.

On the graph for this method, the blue fair-value line is drawn at a P/E of 17.7, which is Hasbro’s average 5-year P/E ratio. 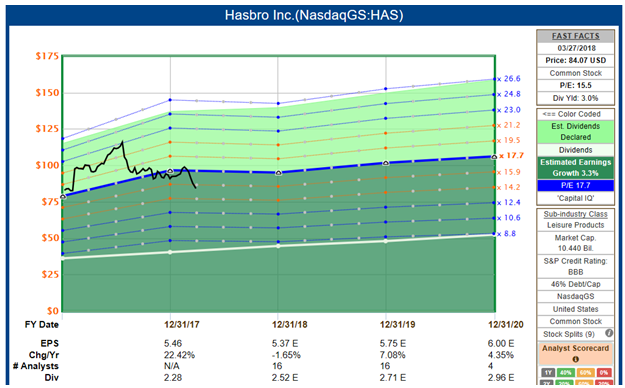 The fair price suggested by this 2nd approach is $95.

In their approach, Morningstar ignores P/E ratios. Instead, they make a detailed projection of all the company’s future profits. The sum of all those profits is discounted back to the present to reflect the time value of money. The resulting net present value of all future earnings is considered to be the fair price for the stock today. They update their estimates periodically.

Morningstar considers Hasbro to be undervalued, as shown by the 4-star rating on their 5-star scale. They estimate that Hasbro is 14% undervalued, with a fair price of $97 per share.

This is an indirect way of calculating fair value. It is based on the idea that if a stock’s yield is higher than usual, it may indicate that its price is undervalued (and vice-versa). 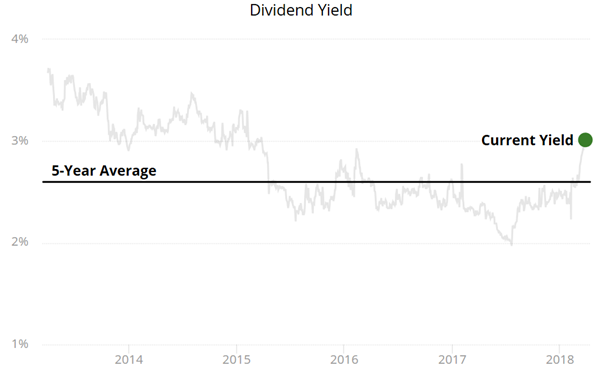 Thus, I conclude that Hasbro’s current price is about 10% below its fair price.

Ten percent happens to be my dividing line between fairly valued and undervalued. I am showing the price as undervalued, since that is the conclusion of 3 of the 4 methods that I use.

As a comparison point, CFRA has a 12-month price target of $110 on Hasbro. That target is 31% above the stock’s current price.

Beta measures a stock’s price volatility relative to the S&P 500. I like to own stocks with low volatility, because they present fewer occasions to react emotionally to rapid price changes, especially sudden price drops that can induce a sense of fear. There is also academic research that suggests that low-volatility stocks outperform the market over long time periods.

Hasbro’s 5-year beta of 0.8 compared to the market as a whole (defined as 1.0) means that its price has been less volatile than the index. This is a positive factor.

In their report on Hasbro, CFRA shows the recommendations of 17 analysts who cover the company. Their average recommendation is 3.9 on a scale of 5. This translates to (just short of) “buy.” This is a positive factor.

I like declining share counts, because the annual dividend pool is spread across fewer shares each year. That makes it easier for a company to maintain and increase its dividend.

Hasbro has stated that share buybacks are a continuing capital priority. They’ve spent $2.6 billion buying back shares over the past 10 years. 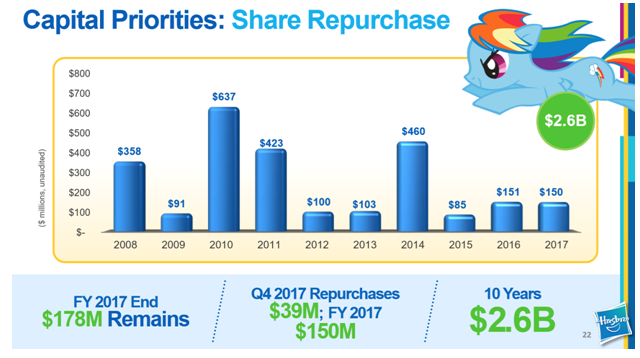 In recent years, though, that hasn’t translated into much of a decline in total shares outstanding.

That probably means that Hasbro has been distributing repurchased shares to executives as part of their compensation packages. If a company buys back shares only to award them to executives, the share count doesn’t decline. That makes the dollars spent on buying back shares misleading – the number is simply a compensation expense, not “money returned to shareholders.”

What’s the Bottom Line on Hasbro?

And here are Hasbro’s drawbacks:

Overall, I see Hasbro as a good candidate for dividend-growth investment. It will be in the running for the next dividend reinvestment in my Dividend Growth Portfolio.

That said, this is not a recommendation to buy, hold, or sell Hasbro. The fact that it has performed well for me over the past 5 years provides zero perspective on whether it is a good investment now. Any investment requires your own due diligence. Always be sure to match your stock picks to your personal financial goals.

There’s Still So Much Upside Ahead for This Stock

Get Ahead With ‘Asymmetric Investments’

Upgrades and Downgrades for Monday, 10/25