By the time you read this, one of the most enduring bull runs ever will have entered Year 10.

The lead-up to the milestone has sparked much conversation in the pundit-o-sphere, such as the lead article in USA Today’s March 8 business section with a headline that screamed: “Is bull market moving into a dangerous phase?”

As is often the case in such pieces, no firm conclusion was presented. Why? Because the experts USA Today used can’t possibly know. Please understand, I am not picking on that publication or those experts; numerous other media outlets have speculated similarly.

The bull market turns nine years old Friday, extending an epic run for U.S. stocks even as concerns about heightened volatility and inflation have slowed the pace of the rally in recent weeks.

Do stocks still have “momentum” or has the market become “dangerous”? Fact is, nobody knows what is going to happen. I sure as heck don’t know … and neither do you.

I have been writing about Dividend Growth Investing (and using the strategy) for six years.

During that time, I have read hundreds of articles warning about the coming of The Next Big Bear.

Some of my colleagues have been hoarding cash since before 2013, convinced that a cataclysmic crash was imminent.

Those who have bought shares of strong companies (and even many weaker ones) at just about any time since have been rewarded handsomely.

Those who have sat on the sidelines have missed out on all or part of a 350% advance.

But is it really prudent to invest now, with the market seemingly hitting new all-time highs every 15 minutes?

One thing we do know is that, over time, the stock market always goes up. 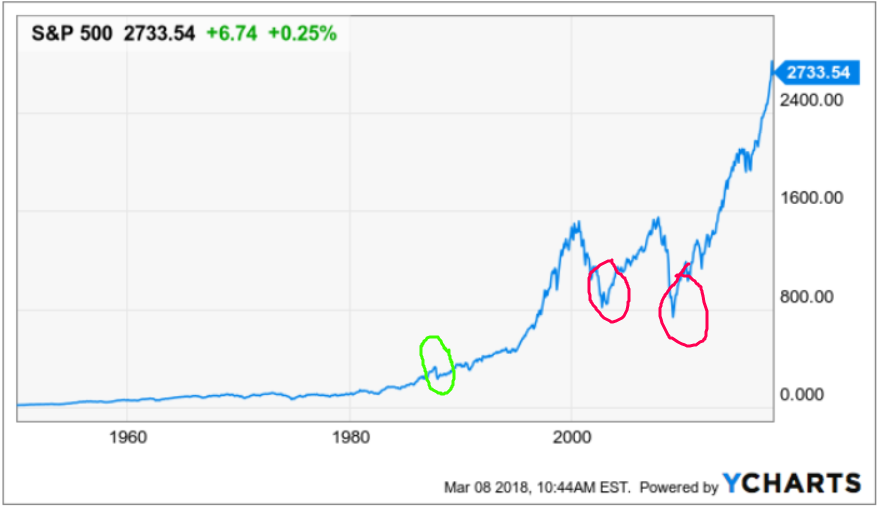 Take a look at that Yahoo chart of the S&P 500 Index over the decades. The two red circles show the last two major market events – the 2000-02 “dot-com crash” and the 2007-09 “Great Recession.” Notice the recovery from each, especially the latter.

All of which brings us to DTA’s Income Builder Portfolio.

I am investing $1,000 twice a month on behalf of Daily Trade Alert. The goal, as stated in the IBP Business Plan:

Build a reliable, growing income stream by making regular investments in high-quality, dividend-paying companies. … The secondary goal is to build a portfolio that will experience solid total return, something we believe will occur organically because of the excellent companies owned.

The idea is to make this project as “real world” as possible, focusing on what a relatively new DGI practitioner might be facing today.

Because The Next Big Bear could be lurking around the corner – or could still be miles and miles away – that “DGI newbie” can invest gradually, as money becomes available, and choose companies with excellent histories and bright futures.

Why NEE for the IBP?

In the course of doing research for my DTA work, some companies turn out to be even more attractive prospects than I had anticipated.

Such was the case with NextEra, which was included in my previous article about the regulated electric utilities on the IBP watch list. 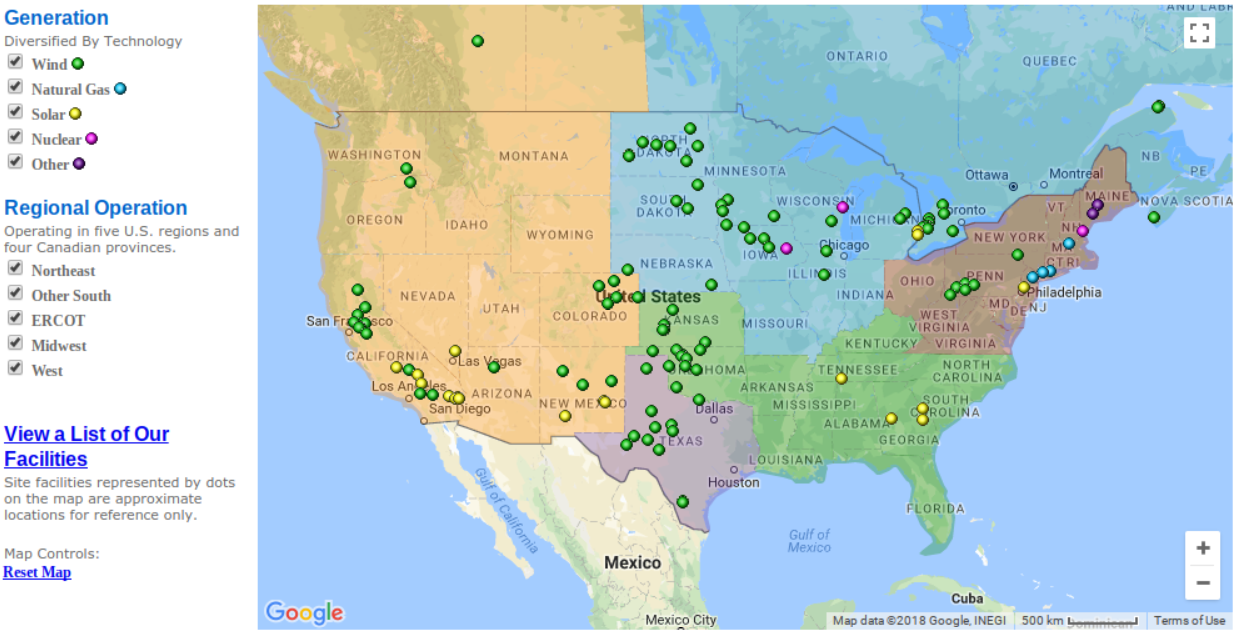 And I knew the company had performed well, but I didn’t know the half of it.

As NEE announced during its Jan. 26 earnings call, both its Florida Power & Light and NextEra Energy Resources operations did superbly again in 2017.

FP&L, the regulated utility that covers one of the country’s fastest-growing states, accounts for about 60% of the company’s earnings. 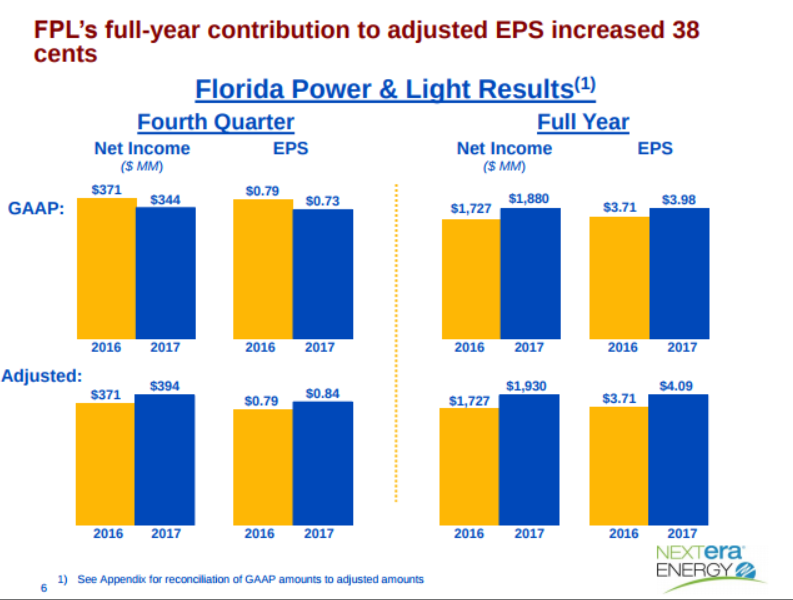 NEER is a national leader in renewable energy; it is the country’s largest producer of wind power and also operates nuclear and fossil-fuel plants. 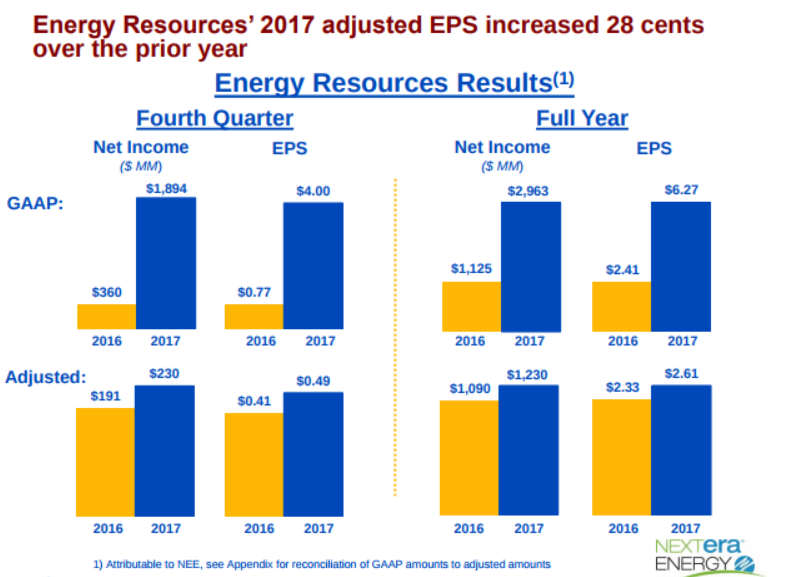 Earnings increases are old hat for NextEra Energy. As this FAST Graphs illustration shows, the company has grown EPS every single year since the turn of the millennium – through good times or bad for the world economy.

As good as all of that looks, I was even more excited about the company’s guidance for 2018 and beyond. Utilities tend to be slow-growing businesses with relatively modest outlooks … but not NEE. 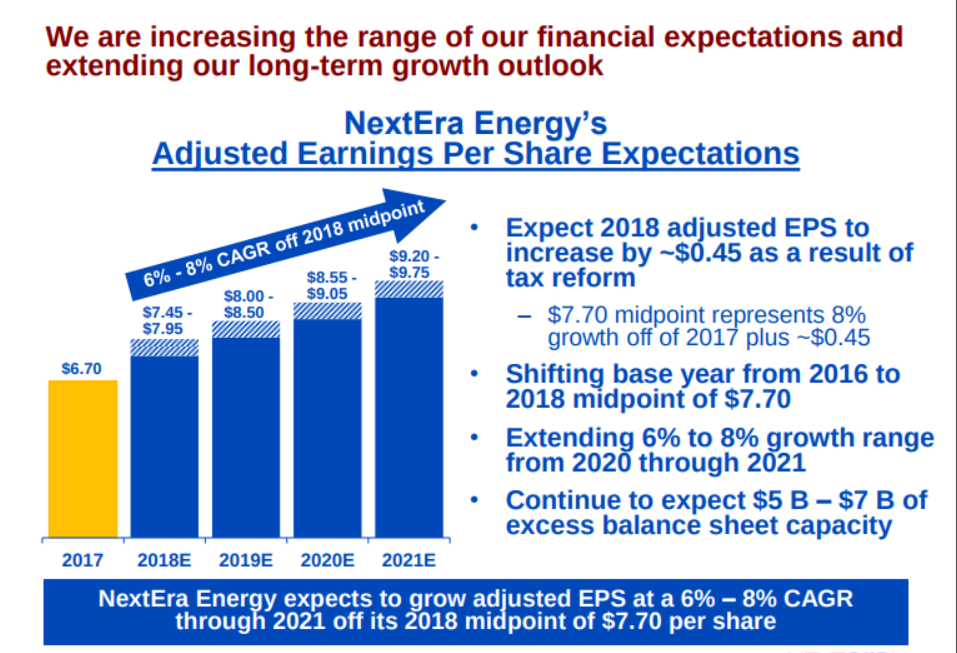 For DGI practitioners, a fringe benefit of all this earnings improvement – both already achieved and expected in the future – is that NEE’s dividend just keeps growing, too.

The company’s track record in that department is exemplary.

Last month, NextEra announced a 13% increase to its annual dividend, from $3.93 per share to $4.44. This continues a trend, as NEE’s average annual dividend growth is 11% over the last 5 years and 9% over the last 10. Those who follow the industry closely know that many major utes give shareholders raises of only a few percent a year.

When NEE hikes its payout again in 2019, it will become a Dividend Aristocrat, joining a select few utilities to increase dividends for 25 consecutive years. 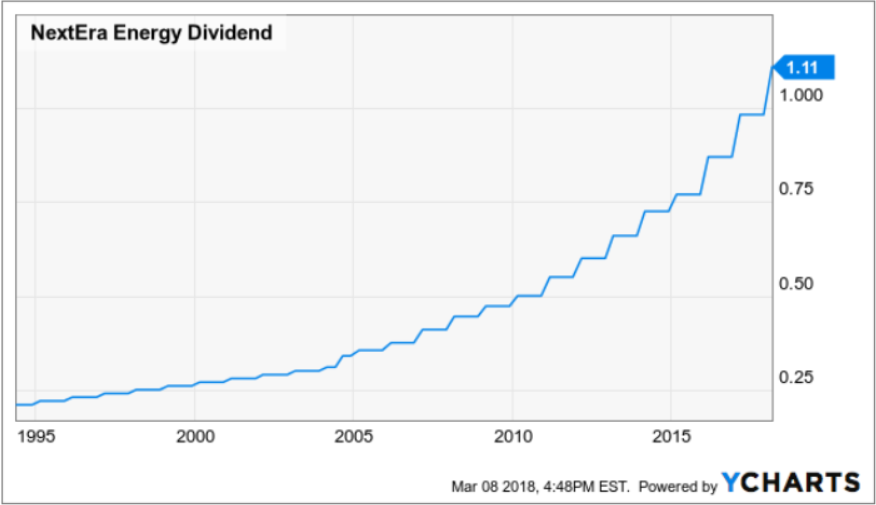 In other words … even throughout the dot-com crash and the Great Recession, NEE’s dividends kept growing and growing. That’s one of the main attractions of Dividend Growth Investing.

But wait … it was a little presumptuous of me to assume that NextEra will have another nice raise in 2019, wasn’t it? Well actually, the company said in a Feb. 16 press release that it expects to increase the dividend by 12% to 14% next year – and then again in 2020. Yes, please!

Despite this history of dividend growth, NEE often is not the utility of first choice (or even second choice) for DGI practitioners.

Indeed, even after the latest raise pushed its dividend yield to 2.9%, NEE was the lowest yielder of the 10 utes I featured in my previous article. That includes three others that operate in the southeast United States: Southern (SO), 5.2%; Duke (DUK), 4.7%; and Dominion (D), 4.6%.

Regrettably, that low-ish yield was one reason I passed on NEE in my first few years doing DGI. The company has consistently outperformed – not just in dividend growth but also in total return. 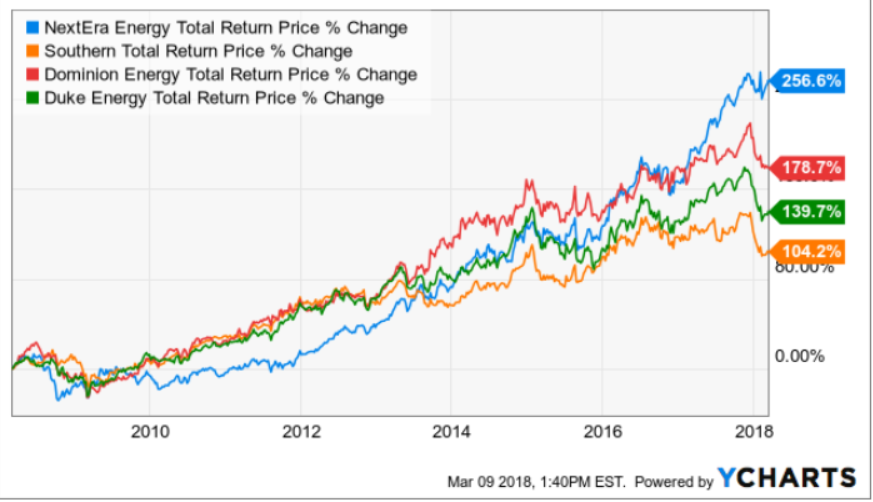 I finally came to my senses last year and bought NextEra Energy for my personal portfolio, and I am looking forward to executing the Income Builder Portfolio’s purchase order on Tuesday. My article detailing that transaction, as well as some valuation information, will be on this site the following day, March 14.

With so much discussion earlier about NEE’s fabulous growth, I almost forgot to mention these facts: The company has received Value Line’s top “Safety” score (1), an A- credit rating from Standard & Poor’s and a near-perfect grade (98) from Simply Safe Dividends.

That’s the kind of quality company I want to own – whether the market goes up or down during the next year or 10.