No investment is fool-proof … but in good times and bad, people will pay to keep the power on in their homes.

That is the most basic of many sound reasons it’s a slam-dunk decision for practitioners of Dividend Growth Investing (and other strategies with income components) to buy stock in regulated electric utilities.

Thanks largely to good working relationships with the states that oversee them, the best “utes” have predictable revenue streams and pass along a large percentage of their profits to shareholders via above-average dividends that grow annually.

As stocks go, most regulated electric utilities can’t keep up with the overall market during a bull run … but that’s not their job.

Utes tend to fall less during downturns, and the income they produce helps investors plan ahead.

Electric utilities definitely will have a significant role in the Income Builder Portfolio, the real-money project I am putting together for Daily Trade Alert.

Plenty of other options are out there, and I mention a few later in this article.

There is nothing wrong with gas or water utilities, and I might discuss some in the future. In general, those have lower dividend yields and their own sets of pros and cons.

Here is a closer look at the 10 regulated electric utilities on my Income Builder Portfolio watch list:

Rising treasury yields have caused some investors to dump their electric utilities. In turn, that has created more attractive valuations for buyers.

NextEra Energy is the world’s largest utility (yellow shading in the table above). Of the 10 that I have selected, it has by far the longest string of annual dividend increases (royal blue) – a 24-year streak that puts NEE within shouting distance of Dividend Aristocrat status. 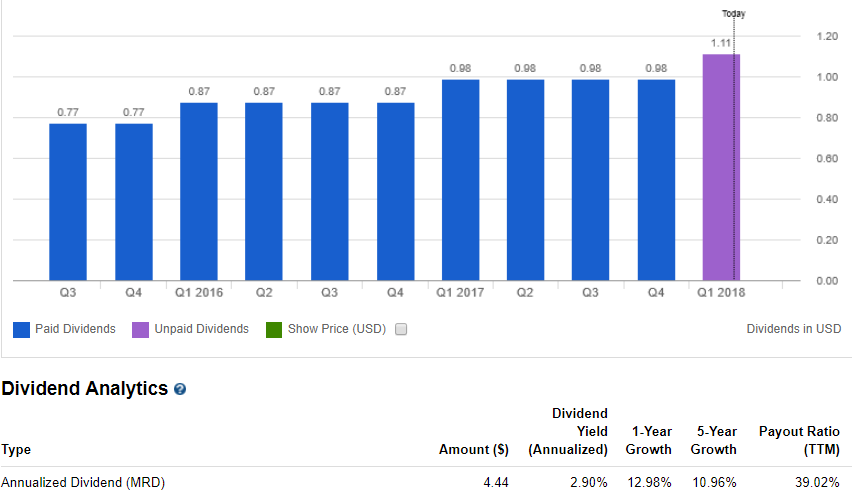 NEE recently raised its payout by 13% (light blue), the largest increase of this group. The company also has announced plans to continue healthy annual increases of 12% to 14% through at least 2020. This growth helps offset its relatively low yield.

Southern Company has the highest yield of these 10 utes, 5.2% (dark blue shading in table), but that comes with mediocre dividend growth. SO also has the largest spread between its forward P/E ratio and its 5-year average (gray shading), one sign of possible undervaluation.

One reason for Southern’s high yield and relatively low valuation: The stock price has moved mostly sideways due to concerns about two expensive, complicated projects that have faced serious delays and political repercussions. 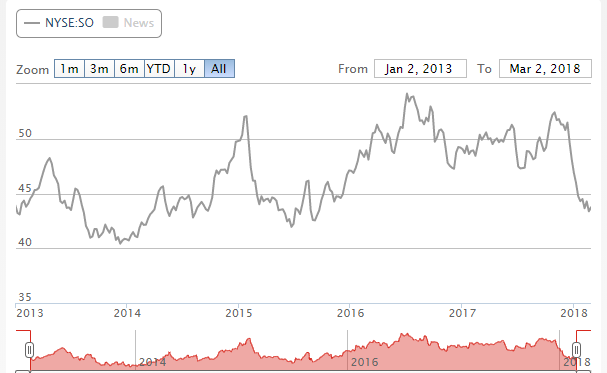 Only three others here have yields higher than 4% – Duke, Dominion and Edison International.

Dominion also is the only utility that Morningstar has bestowed with a “Wide” moat rating (orange), as explained here:

We believe a regulated utility can establish a wide economic moat if it operates in a constructive regulatory environment and it has a material share of earnings from non-utility businesses with sustainable competitive advantages. In our view, Dominion meets these criteria with the completion of the Cove Point LNG export facility and the Atlantic Coast Pipeline.

Safety Rank measures a company’s “total risk of a stock relative to the approximately 1,700 other stocks covered” by Value Line. NEE, XEL, WEC and AEP have received the top score of 1 (red shading). The other six got 2’s, which is fine; I regard anything 3 or above as speculative.

Most of the companies received solid A- credit ratings from Standard & Poor’s (light green shading). The BBB+ ratings given to Dominion, Sempra and Edison International are still comfortably in the “investment grade” zone.

Sempra has the second-lowest dividend yield of this group, and it doesn’t have a single shaded box in the IBP watch-list table. But it is a good all-around performer and a decent value. 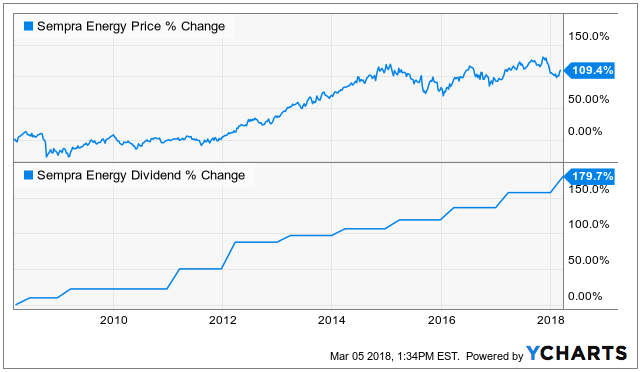 SRE’s yield is 18% higher than its 5-year norm, it ranks fourth in both recent DG and 5-year average DG, it is undervalued relative to Morningstar’s FVE and its 5-year P/E ratio, and it gets good marks for moat, safety and credit.

Xcel still seems a little pricey compared to many peers, but it is a high-quality operation with plans to invest billions of dollars in renewable energy.

WEC Energy has long been one of my favorite utilities, partly because it has aggressively grown its dividend. It has signaled that such growth will not be quite as hefty going forward, but 5% to 7% annually is still pretty sweet. 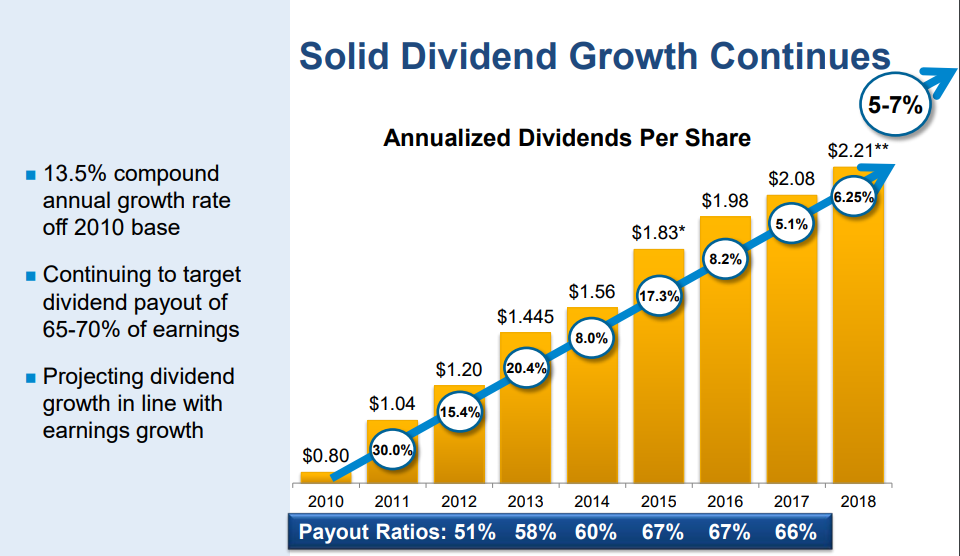 Edison International has some attractive metrics, including a 41% spread between current yield and its 5-year average (purple shading in the table), 12.4% dividend growth over the last 5 years (dark green) and the lowest forward P/E ratio of the group at 14.2% (bright green).

EIX could face some headwinds, however, including potential liability from the recent California wildfires and a proposed rate cut. Interested investors should do extra homework on this one.

Alliant is similar to Sempra in that it is solid across the board but not spectacular in any area. LNT appears to be fairly valued. It and Duke benefit from friendly regulatory jurisdictions – LNT in Iowa and Wisconsin; DUK mainly in the Carolinas.

As a Charlotte resident, Duke is my provider. Although I’m a little concerned about a possible showdown with the state over the disposal of toxic coal ash, DUK has been a steady performer and yields nearly 5%.

American Electric Power serves parts of 11 states and has improved its financial performance by gradually selling off non-core assets. It also is shifting aggressively from coal toward renewable energy. 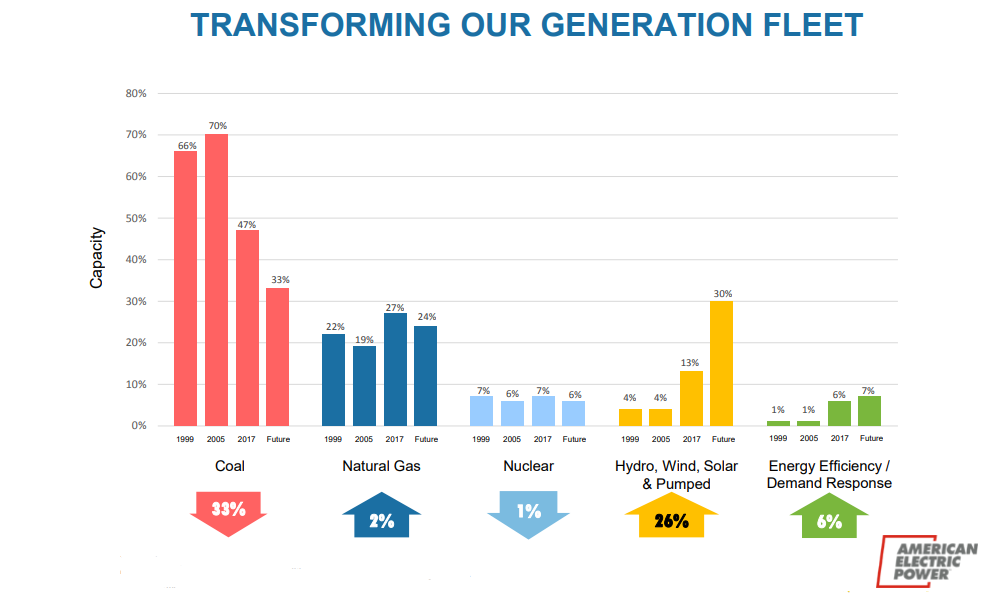 There are numerous other regulated electric utilities worth researching. Here are a few that might interest some folks as much as the 10 on the Income Builder Portfolio watch list:

Vectren (VVC) and Consolidated Edison (ED) – They own two of the longest dividend growth streaks in the industry, at 58 and 44 years, respectively. Solid choices for those who want proven income growth and don’t mind small annual increases.

OGE Energy (OGE) and CenterPoint Energy (CNP) – These are interesting companies with 4%+ yields but complicated corporate structures that include master limited partnerships. I like to keep it simple with my utes.

SCANA (SCG) – Although it has an eye-popping 6.2% yield, SCG faces major question marks regarding abandoned nuclear projects, governmental angst and Dominion’s all-stock takeover bid. Investors hate uncertainty, which is why SCG’s price has fallen off a cliff. 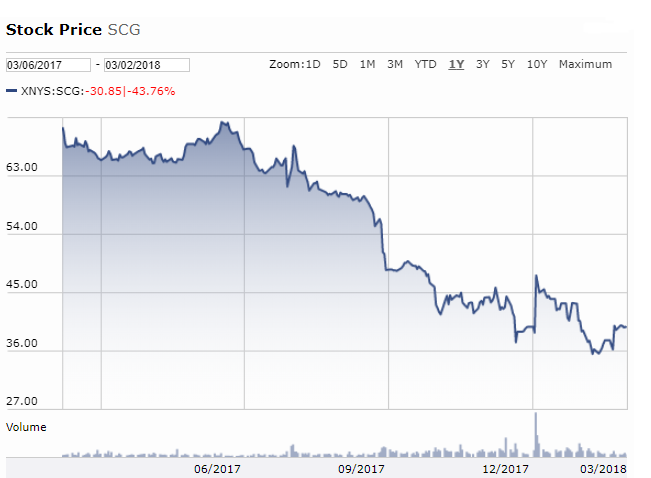 PPL Corporation (PPL) – Its price has been hit by regulatory concerns over its large United Kingdom component, but PPL has a tempting 5.9% yield. Trading at only 12 times expected 2018 earnings, it could make a nice value play for more risk-tolerant DGI practitioners.

Eversource Energy (ES) – Morningstar says the company has no moat due to “some of the toughest regulation in the U.S.” Too bad, because ES has raised the dividend 20 straight years. 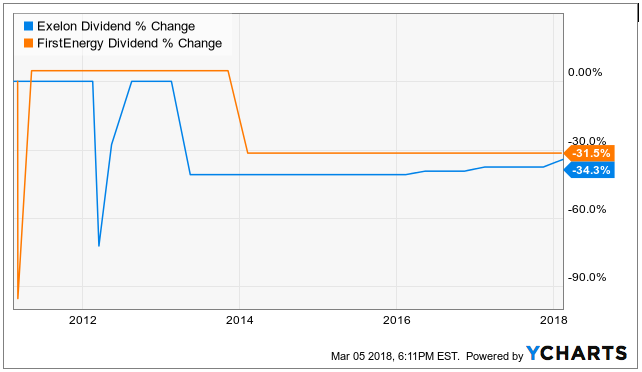 I don’t need robust income from every stock, but I absolutely must be able to depend on divvies from my utes. That’s why I won’t subject either the IBP or my own portfolio to utilities that have recently cut or frozen their dividends.

From largest to smallest stakes, I personally own WEC, D, SO, NEE and SRE. I initiated positions in NEE and SRE just last year, and I plan to build them up gradually.

Even with all the information to chew on in this article, I highly recommend that investors conduct thorough due diligence before taking any bites.