Medtronic is one of several high-quality blue-chip companies that I keep on my watch list, but it usually seems overvalued. Recent market events have brought the valuation into a more attractive range.

Let’s check it out.

This is a good dividend resume.

Medtronic’s yield of 2.3% is not extremely high, but it qualifies as “enough” for many dividend growth investors, especially younger ones who often look more at the dividend growth rate than the current yield.

The dividend increase record is impressive, as shown on the following slide: 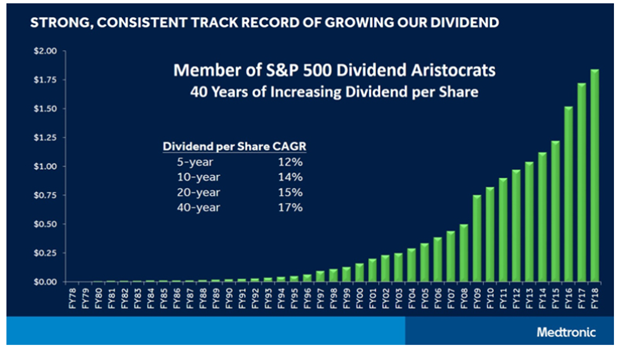 [Source of all slides: Medtronic]

Medtronic’s dividend safety scores could hardly be better from Simply Safe Dividends and SafetyNet Pro. There is almost no risk of the company’s dividend being cut any time soon. (For more insight on dividend safety, see Dividend Growth Investing Lesson 17.)

Medtronic was founded in 1949 as a medical equipment repair shop. MDT’s first life-changing therapy was a wearable, battery-powered cardiac pacemaker. That became the foundation for many more Medtronic therapies that employ electrical stimulation to solve medical conditions.

Medtronic is structured into four groups: 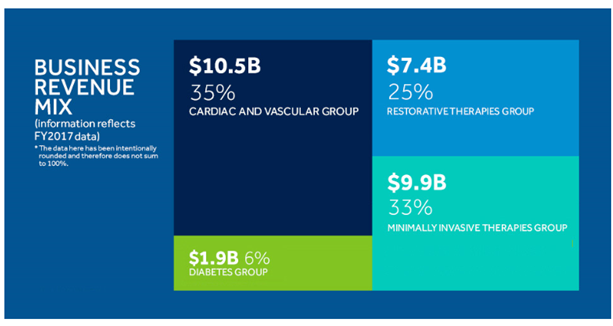 The Minimally Invasive Therapies Group is the former Covidien, an Irish company that was acquired in 2015. Medtronic formed a new holding company incorporated in Ireland (Medtronic plc), but its operational headquarters are in Minneapolis.

Medtronic has stated that its business goals are for mid-single-digit revenue growth through expansion into emerging global markets and therapy innovation. The following slide shows revenue growth over the past few years.

Medtronic believes that the penetration of existing therapies into emerging markets represents their single largest growth opportunity. To that end, they are trying to optimize their selling and distribution channels as well as form partnerships with hospitals and public entities globally. International sales currently represent ~15% of total sales, and Medtronic is targeting double-digit growth in such sales. 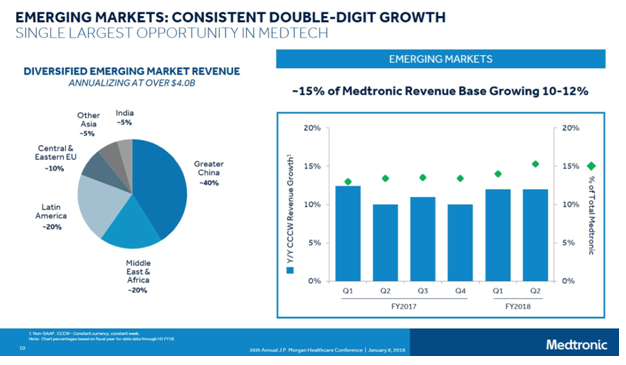 Medtronic has an Enterprise Excellence program to drive cost savings, margin expansion, and improvements in earnings. It is expected to produce $500-$700M annual improvements over the next several years. Synergy savings from the Covidien acquisition in 2015 have already been achieved ahead of schedule. 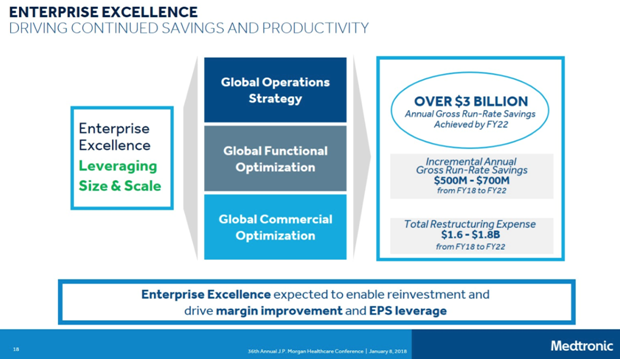 In summation, Medtronic gets high marks for its business quality.

Medtronic gets an A++ financial grade from Value Line. My analysis might deliver a slightly weaker grade, but as you will see, annual figures on every financial metric were impacted by the Covidien acquisition in 2015.

Return on equity (ROE), which is a measure of profitability, fell after the Covidien acquisition, but it has been recovering for the past 3 years as the expansion has been absorbed. Over the past 12 months, ROE has been 9.9%, and it should continue to rise as the Enterprise Excellence program continues to take effect.

Medtronic’s earnings have been consistently positive over the last 10 years, even during the Great Recession. Annual growth became bumpy as the Covidien acquisition was absorbed, but earnings have risen annually since then.

Medtronic is a consistent generator of free cash flow, even following the Covidien acquisition, although the acquisition caused a drop in the absolute numbers. Free cash flow is the cash a company has left over after paying its expenses. Excess cash flows allow a company to pursue investment opportunities, make acquisitions, repurchase shares, and pay/increase dividends.

The strong cash flow record is one of the major reasons that Medtronic’s dividend is considered so safe.

Another financial strong point is Medtronic’s relatively low debt level. These days, a 32% debt-to-capital level looks quite conservative, and as with other financial metrics, it has been improving since the Covidien acquisition.

Overall, Medtronic presents a very solid financial picture, with an obvious “speed bump” in 2015-2016 from the Covidien acquisition.

My 4-step process for valuing companies is described in Dividend Growth Investing Lesson 11: Valuation. Let’s go through the steps. 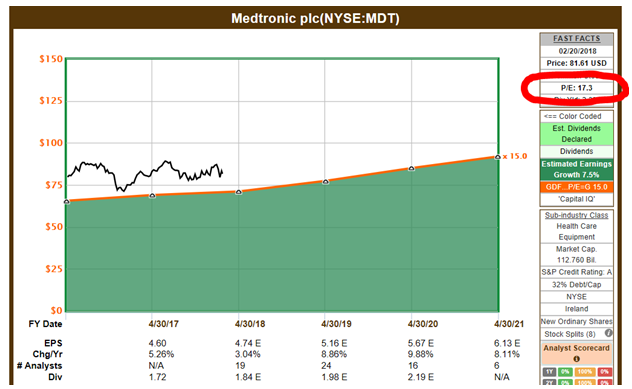 On the next graph, the blue fair-value line is drawn at a P/E of 15.8, which is Medtronic’s 5-year average P/E ratio. 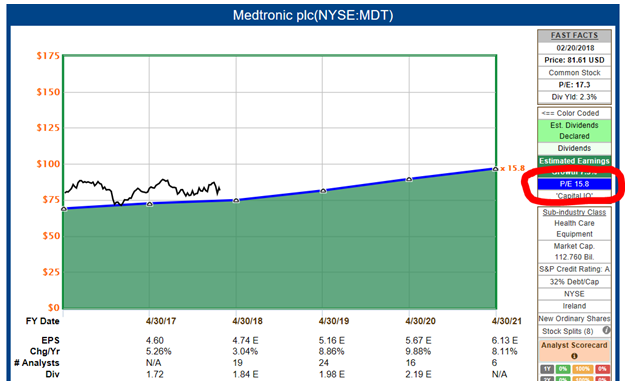 I consider any price within 10% (either way) of fair value to be “fair.” The fair price suggested by this 2nd approach is $75.

In their approach, Morningstar ignores P/E ratios. Instead, they make a detailed projection of all the company’s future profits. The sum of all those profits is discounted back to the present to reflect the time value of money. The resulting net present value of all future earnings is considered to be the fair price for the stock today. They update their estimates periodically.

Morningstar considers Medtronic to be undervalued, as shown by the 4-star rating on their 5-star scale.

Morningstar has recently introduced new displays, and they now show a graph that traces the historical changes in in their estimated fair price (in red) compared to the stock’s actual price (in black).

You can see that the stock’s price is currently below their estimate of fair value, which they place at $97 per share.

Medtronic’s current yield is 2.3%. According to Morningstar, the company’s 5-year average yield has been 1.9%. The current yield is thus 21% higher than average, suggesting the stock is significantly undervalued.

In this 4th method, I cut off the difference at 20% to be conservative. At 20% undervaluation, Medtronic’s fair price would be $103.

Thus, I conclude that Medtronic’s current price is about 6% below its fair price. I consider anything within 10% of fair value to be “fair.”

As a comparison point, CFRA has a 12-month price target of $100 on Medtronic. That target is 22% above Medtronic’s current price.

Beta
Beta measures a stock’s price volatility relative to the S&P 500. I like to own stocks with low volatility, because they present fewer occasions to react emotionally to rapid price changes, especially sudden price drops that can induce a sense of fear. There is also academic research that suggests that low-volatility stocks outperform the market over long time periods.

Medtronic’s 5-year beta of 0.9 compared to the market as a whole (defined as 1.0) means that its price has moved about in-line with the market on average. This is a neutral factor.

Share Count Trend
I like declining share counts, because the annual dividend pool is spread across fewer shares each year. That makes it easier for a company to maintain and increase its dividend.

To go along with its 40-year history of raising the dividend, Medtronic has had ongoing share buyback programs. They lump these together with their dividend program under the rubric of “returning capital to shareholders.” 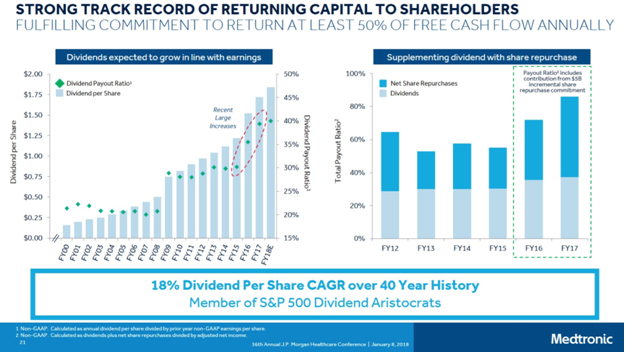 I’ll be honest: Even though the term is widely used, I don’t like “returning cash to shareholders” when it is applied to buyback programs. First, shareholders don’t receive money directly from share buybacks, because a shareholder would have to sell his or her shares to realize any gain. The value of their shares is determined by the market, which may or may not react intelligently to the fact that shares have been bought back by the company.

Second, a company may buy back shares but not retire them. It is common to use shares in executive compensation packages, for example. If a company buys back shares only to give them to executives, the share count doesn’t decline. That makes the raw number of shares bought back misleading.

It’s better to look at actual shares outstanding. The following chart shows Medtronic’s share counts over the past 13 years. Again in this chart, notice the Covidien effect – the company issued shares to raise capital for the acquisition. (On the positive side, capitalizing new shares probably helped keep debt low in financing the acquisition.)

What’s the Bottom Line on Medtronic?

Other than normal business risks, no real negatives stand out.

Overall, I see Medtronic as a strong candidate for investment. It will be in the running for the next dividend reinvestment in my Dividend Growth Portfolio.

That said, this is not a recommendation to buy, hold, or sell Medtronic. Any investment requires your own due diligence. Always be sure to match your stock picks to your personal financial goals.