It wasn’t all too many years ago that those committed to Dividend Growth Investing practically had to ignore technology stocks.

As companies mature, however, many start to return money to shareholders. That even has become true within the tech sector.

And so now we see Apple (AAPL) with 6 consecutive years of dividend growth, KLA-Tencor (KLAC) yielding nearly 3%, Texas Instruments (TXN) growing its payout by 24%, and Cognizant Technology Solutions (CTSH) forking over its first-ever dividend in 2017 – its 24th year of existence.

The fine folks at Daily Trade Alert are providing $2,000 per month, and I will spend the next several years choosing the components of a DGI portfolio for them.

I expect to include several technology companies before all is said and done.

Others on my watch list (both for the IBP and my personal portfolio) include: technology services company Accenture (ACN), networking equipment maker Cisco (CSCO), IT services provider Cognizant, chip-makers Intel (INTC) and Texas Instruments, semiconductor equipment makers KLA Tencor and Applied Materials (AMAT), and payroll services company Paychex (PAYX). (Qualcomm is not on my watch list for reasons explained later.)

I know some DGI proponents who are “afraid” to own technology stocks. They’ll own AT&T (T) – which is now as much a tech company as it is a telecommunications operation – or complicated businesses such as REITs and MLPs … but they won’t own Microsoft. They’ll accept the volatility inherent in most cyclical industrials … but Apple is “too risky.”

3M (MMM) is my favorite industrial. Here is the first line of its description of itself: “3M Company operates as a diversified technology company worldwide.” An investor can’t get away from tech even if he or she tries!

Sure, it’s not easy to find 3%+ yields in solid techs, but it is relatively easy to find growth in the sector – both dividend growth and earnings growth. Although I am a 57-year-old DGI guy at heart, I welcome lower-yielding companies that offer superior growth into my overall portfolio.

Technology companies often fit that bill nicely. I happen to think it’s imprudent for investors of any age to summarily dismiss an entire sector.

Here is a closer look at the tech companies on my watch list:

Microsoft and KLA-Tencor are the only companies whose current price is lower than what Morningstar considers fair value, as signified by the dark green-shaded boxes in the table above.

Another potential sign of reasonable valuation for a dividend-paying company is if its current yield is higher than its historic yield. Four companies can say that (gray shading), with Paychex having the biggest difference.

Year-over-year dividend growth of 20% is extraordinary (light blue), and it’s pretty rare for companies to average 20% DG over a 5-year period (dark blue). Two on this list have pulled off the “double-20”: Texas Instruments and Visa.  (Applied Materials did just hike its dividend 100%, but it had gone more than 3 years without a raise.) 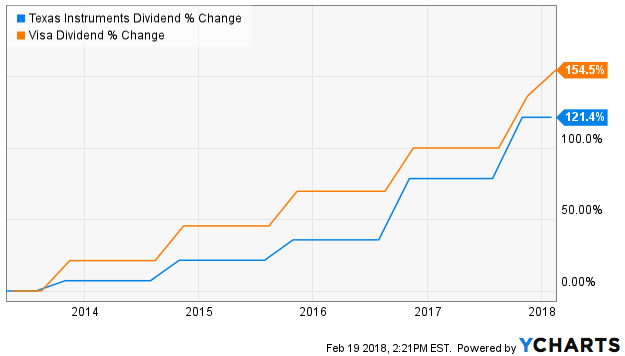 I favor wide-moat companies (orange shading in table) – those that have major competitive advantages and offer products or services that can’t be easily replicated by rivals or potential upstarts. Most on my watch list get the “Wide” designation. There’s nothing bad about narrow-moat companies, either. (Morningstar’s lowest moat rating is “None.”)

Value Line’s Safety Rank measures a company’s “total risk of a stock relative to the approximately 1,700 other stocks covered” by VL; 1 is low risk, and 5 is high risk. Most on my list are 1’s (light green), though I have included a pair of 3’s – AMAT and KLAC.

Microsoft is one of only two companies in the world to receive S&P’s AAA credit rating (red shading). (Johnson & Johnson is the other.) That means MSFT is highly likely to be able to repay debt, which gives the company more borrowing power. KLA-Tencor’s BBB rating is still considered “investment grade.” (Cognizant and Paychex are not covered by Standard & Poor’s.) 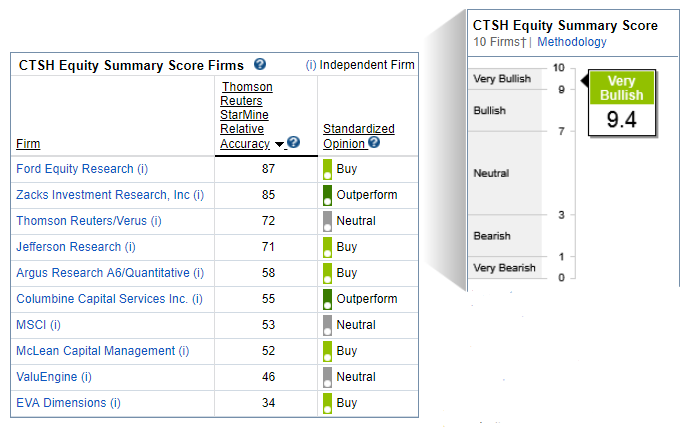 Only one company had no shaded areas in the table: Apple. Nevertheless, AAPL is just about fairly valued, it has double-digit dividend growth, its narrow moat is perfectly fine, it has an excellent AA+ credit rating, and analysts are bullish. One could make a case that Apple is the best “all-around buy” in the sector right now.

Although many call Visa and Mastercard “financials,” both are officially listed in the ”Information Technology” sector by GICS – Global Industry Classification Standards. Each also describes itself as a technology company on its Web site.

One thing that’s indisputable is that both V and MA are very low-yielders, so I look at their dividends merely as a nice bonus. Thankfully, their fantastic business models have made them total-return machines … and, long-term, I expect that story to continue. 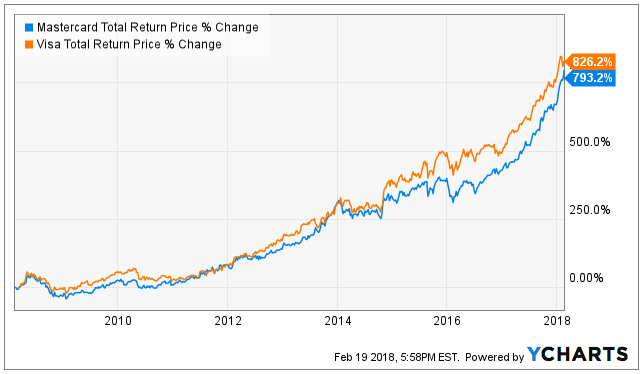 A Little Something For Everyone

If yield is the primary consideration, then Cisco and Paychex rank highest among the companies on my watch list. If dividend growth matters most, Texas Instruments has an enviable record. Those with higher risk tolerances might go for the likes of KLAC, AMAT and CTSH.

As for the best valued companies … none of these is exactly a “screaming buy.” But KLA-Tencor did get shaded boxes across the board, and decent cases can be made for most others. Some stocks, such as Visa and Mastercard, seem to always merit premium prices – that’s often true of iconic brands, regardless of sector.

Two More … But Too Messy

Both are priced below fair value, have P/E ratios lower than their 5-year averages and excellent 5-year DG rates. Broadcom just raised its dividend by nearly 72% and analysts like it. QCOM’s yield exceeds its 5-year average, it gets a 2 for Safety and it has an A credit rating.

Well, Broadcom is trying to buy Qualcomm, which has repeatedly rebuffed its rival’s overtures. Meanwhile, QCOM has spent more than a year trying to acquire NXP Semiconductors (NXPI).

Too many moving parts. Too much unknown. As a stock-buyer, I’m not a big speculator. If you are, have at it!

I do hold a small QCOM position that I bought years ago; otherwise, I’m content to do nothing with either company until things are resolved.

Others I considered: Automatic Data Processing (ADP), Corning (GLW), IBM (IBM), Infosys (INFY), Lam Research (LRCX), Microchip (MCHP), Nvidia (NVDA), Oracle (ORCL) and SAP SE (SAP). Just because they fell short of my watch list this time doesn’t mean they are “bad” companies – or that they won’t be added in the future.

If one is willing to buy non-dividend stocks, Alphabet (GOOGL) is a ubiquitous force of nature. Despite the company not paying a dividend, my daughter added GOOGL to her DGI portfolio last year. 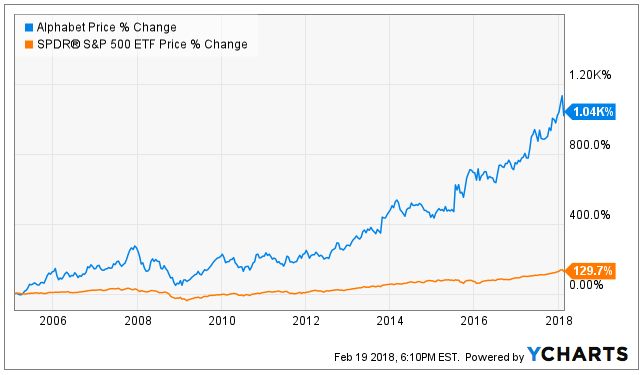 For those curious, Amazon (AMZN) and Alibaba (BABA) are not classified as technology companies but rather as consumer businesses.

Lastly, some investors might want to consider something along the lines of Vanguard Information Technology ETF (VGT) – a low-cost fund with a 1% yield. AAPL, GOOGL and MSFT make up about a third of its portfolio; those 3, along with FB, V, INTC, CSCO, ORCL, MA and NVDA, make up 57%.

A DGI practitioner who wants technology exposure now has many options. Adding companies from that sector certainly can enhance a portfolio, especially in the growth department.

Within this article, I cited work from a few stock research operations, mostly Morningstar and Value Line. There are many more out there to help investors find information above and beyond the data provided in this quick look at the dozen tech companies on my watch list.

I highly recommend that all investors conduct thorough due diligence before buying any stocks, including those mentioned here.