After my friend and Daily Trade Alert colleague Dave Van Knapp heard I would be putting together DTA’s Income Builder Portfolio, he told me:

MO is the symbol for tobacco giant Altria. And Dave figured I would choose it for the IBP because, with us having worked together on a few projects for another investing site years ago, he knows how much I like the company.

“Like” in this context doesn’t refer to the product Altria sells. I don’t smoke, I don’t care to be around others when they are inhaling carcinogens into their lungs (and exhaling them into my space), and I have mourned loved ones I have lost to cancer. 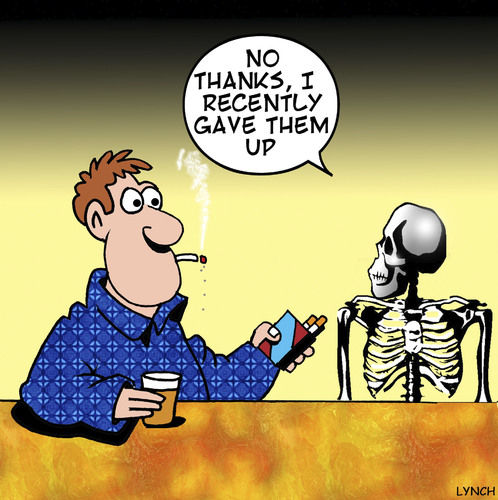 Some people will not invest in tobacco companies specifically because of the insidiousness of the product. And I would never try to convince those folks that they are wrong to avoid MO on moral grounds.

I justify having Altria in my personal portfolio – and buying it for the IBP – by noting that publicly traded companies sell all kinds of “bad” products: bombs, junk food, electronics produced by child labor, sugary beverages, guns, overpriced drugs, oil, chemicals, alcohol, etc.

If I avoided all of them, I’d have few investments!

More justification for investing in such an unhealthy product: It is my job to secure the financial health of my family. With annual returns exceeding 20% over the span of decades, Altria arguably has been the greatest stock ever, and I’m pleased to have owned it for many years.

I also am happy to select it for the IBP, and on Tuesday, Feb. 13, I will execute the purchase of MO for our real-time, real-money project. It will be the third company in the portfolio, joining Amgen (AMGN) and 3M (MMM).

The thing I like the least about Altria’s main product – cigarettes – is what I like the most about MO as an investment.

Warren Buffett says all truly great companies have enduring competitive economic advantages – “moats.” Well, Altria has as wide a moat as there can be: It sells a product so addictive that even people who desperately want to stop using it have difficulty doing so.

Altria has pricing power because its customers seemingly will pay whatever it takes to wrap their lips around its product.

During the Feb. 1 earnings call, CEO Martin Barrington said the Marlboro brand accounts for 43.3% of the U.S. cigarette market.

In addition to Philip Morris USA, which produces cigarettes, MO also is the world leader in smokeless tobacco.

Thanks to its Black & Mild brand, the firm sells about a quarter of all large machine-made cigars in the United States … and MO has a 90% share in the higher-margin tipped-cigar business.

Altria’s reach includes another “sin” operation, as well: booze. It operates the Ste. Michelle’s Wineries, one of the country’s top 10 wine producers, and it has about a 10% stake in Anheuser-Busch InBev (BUD).

Also, MO is waiting for FDA approval to market IQOS tobacco heating devices in the United States; the product has done well in foreign lands for Altria’s “sister” company, Philip Morris International (PM). IQOS in America would be a major opportunity, but it is not critical for MO’s survival.

One way the firm delivered value to shareholders in the past was by spinning off successful businesses. Besides PM, there was Kraft – which is now Kraft Heinz (KHC) and which, in turn, spun off snack-foods purveyor Mondelez (MDLZ). 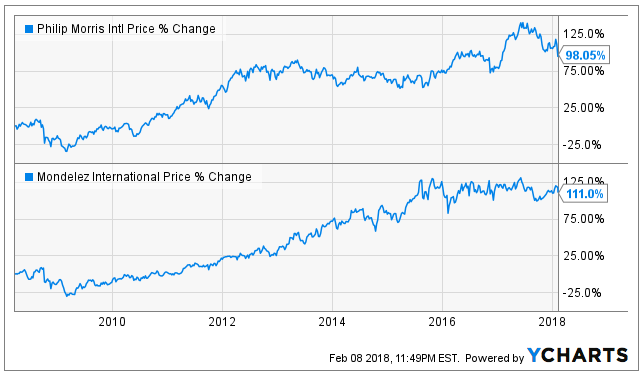 I’m not certain MO has another spin-off coming, but there is a rumor that MO and PM could get back together as one giant tobacco conglomerate. That would be interesting if it ever happens.

Here’s what Barrington, the CEO, had to say about guidance for 2018:

We expect to deliver full-year 2018 adjusted diluted earnings per share of $3.90 to $4.03, from a 2017 adjusted diluted EPS base of $3.39. This range represents a growth rate of 15% to 19% from 2017 and reflects expected higher net earnings as a result of tax reform, net of strategic long-term investments we are making in our business.

Although I’ll have more about valuation in my next article, the recent overall market pullback has knocked down MO’s forward P/E ratio to the 16-ish level – pretty attractive for such a high-quality operation.

Altria has raised its dividend for 48 consecutive years. That’s impressive enough, but it’s the consistency of the income growth that is truly amazing. 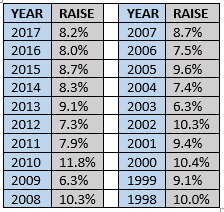 As illustrated in the table at the right, of MO’s last 20 dividend increases, the smallest was 6.3% twice – once during the heart of the Great Recession, the other when the economy was emerging from the dot-com bust.

Like clockwork, every August for nearly a half-century, Altria has delivered a wonderful gift to its shareholders. Six months from now, it is realistic to expect another hike in the 7% to 9% range.

That kind of reliability is huge for retirees who depend upon dividend income to help pay their bills. Of course, even those of us not yet living on that income dig those Divvy Dollars, too!

Every January, April, July and October for many years now, I have been reinvesting my MO dividend … and all of that “dripping” has let me build an enviable position in a blue-chip company.

(MO is my eighth-largest holding by dollar value, making up about 4% of my stock portfolio, and it’s my fourth-largest income producer. I also own a large PM stake.)

Not exactly. Altria, like all tobacco companies, faces serious challenges. 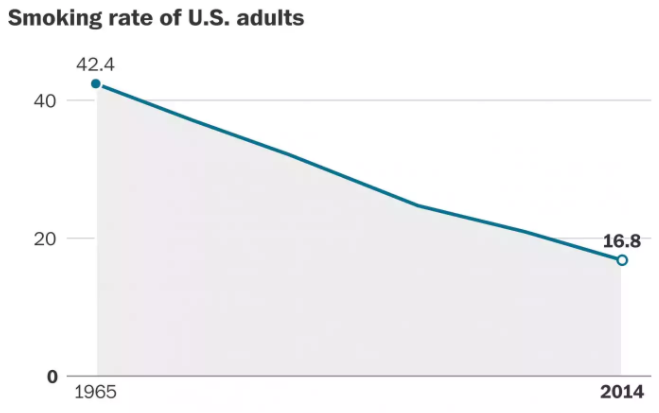 (Data from Centers for Disease Control and Prevention;       graphic from Washington Post)

Even if IQOS gets regulatory approval in the United States, the presence of the tobacco heating device in MO’s lineup surely will siphon off even more smokers.

As Morningstar said in its Feb. 2 update on Altria:

We believe the percentage of the 18-and-older population that smokes will fall from 17.5% in 2014 at approximately 0.25% a year, and we forecast an average 3% decrease in consumption per smoker, leading to an average 3.6% decline per year in the number of U.S. cigarettes consumed. We then layer market share assumptions for Altria’s key brands to get to our base-case volume assumption of a 4% annual decline (non-Marlboro brands cede slightly more share than Marlboro gains).

So far, Altria has been able to make up for those declines by raising prices. Skeptics would say that can’t go on forever.

Another challenge is the regulatory environment in the United States. At any time, new taxes could be imposed and new packaging requirements made. There is a movement afoot to mandate reduced nicotine levels, too.

And then there’s litigation. Somebody is always suing major tobacco companies.

Finally, Barrington is retiring in May. He will be replaced as CEO by Howard Willard, currently the chief operating officer. Billy Gifford has been promoted from chief financial officer to COO.

The board of directors obviously believes Willard and Gifford will keep the company smokin’ , but major leadership changes do create uncertainty.

Tobacco is such a unique industry in the investing world. I mean, Altria makes a product that literally kills off its most loyal users. 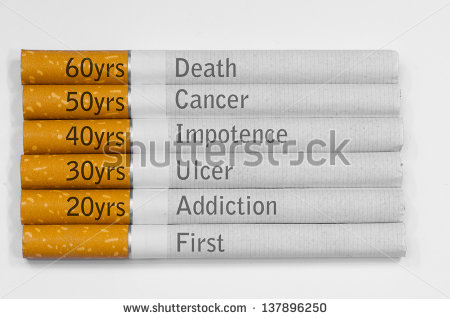 Nevertheless, MO keeps making money – and keeps returning much of it to shareholders.

I’m comfortable with Altria as one of my largest stock holdings, and I’m confident it will perform well for the Income Builder Portfolio.

My article about the execution of our MO purchase, along with some pertinent valuation information, will be published Wednesday, Feb. 14.

I am not a financial advisor. Each investor should conduct his or her own due diligence before buying any stock.