Given the recent stock market carnage, my desire to save DTA’s Income Builder Portfolio a few bucks on my 4-share purchase of 3M (MMM) last week now seems quaint.

Since we initiated our position at $252.99 per share, 3M – like just about every other stock out there – saw its price drop from the sky. 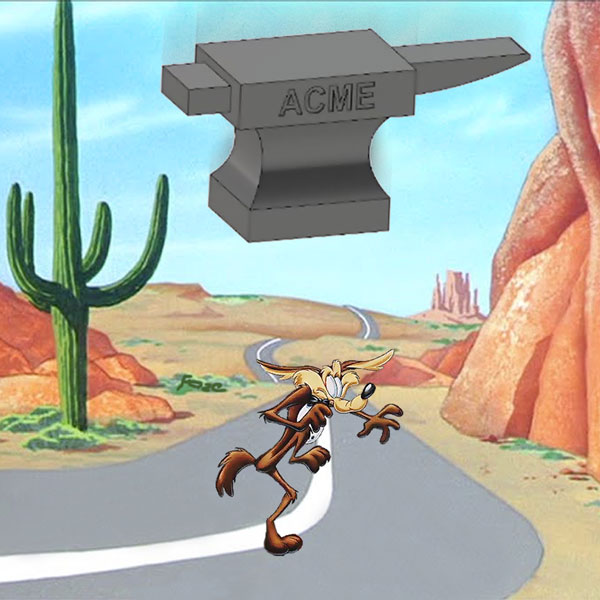 Well, this article is not about the Dow Jones Industrial Average plummeting 4.6% on Monday, Feb. 5, or the other smaller declines of recent days.

This is about the actual process I used in buying MMM for the IBP, as well as a different company for my personal portfolio. It’s also about using limit orders in falling-market scenarios.

When I made Amgen (AMGN) the IBP’s first position earlier in January, I executed a market order. It was quick and easy: I logged into the brokerage account, went to the buy screen, put in the stock symbol, designated the number of shares and hit Buy.

Just like that, the Income Builder Portfolio acquired 5 shares of the biotechnology company at the going rate that very instant.

In contrast, my 3M transaction on Jan. 30, was “finessed” a little, as I used a series of limit orders to try to get the position cheaper than the previous day’s $256.01 closing price.

I noticed that “futures” were trending down an hour before the market opened, so I put in an order for 3M at $249.59 – which was 2.5% lower than the previous day’s closing price. My rationale: Had there been a pullback right at the open, I wanted to benefit from it.

With a limit buy order, the purchase will not be executed unless the price reaches the designated figure. It is a way for an investor to control what he or she is willing to pay.

MMM opened at $255.60, only slightly below the previous close. The overall market was still moving lower, so I decided to bide my time.

I then took my dog for a walk so I didn’t sit at my computer, staring at the screen and refreshing the price quote constantly. 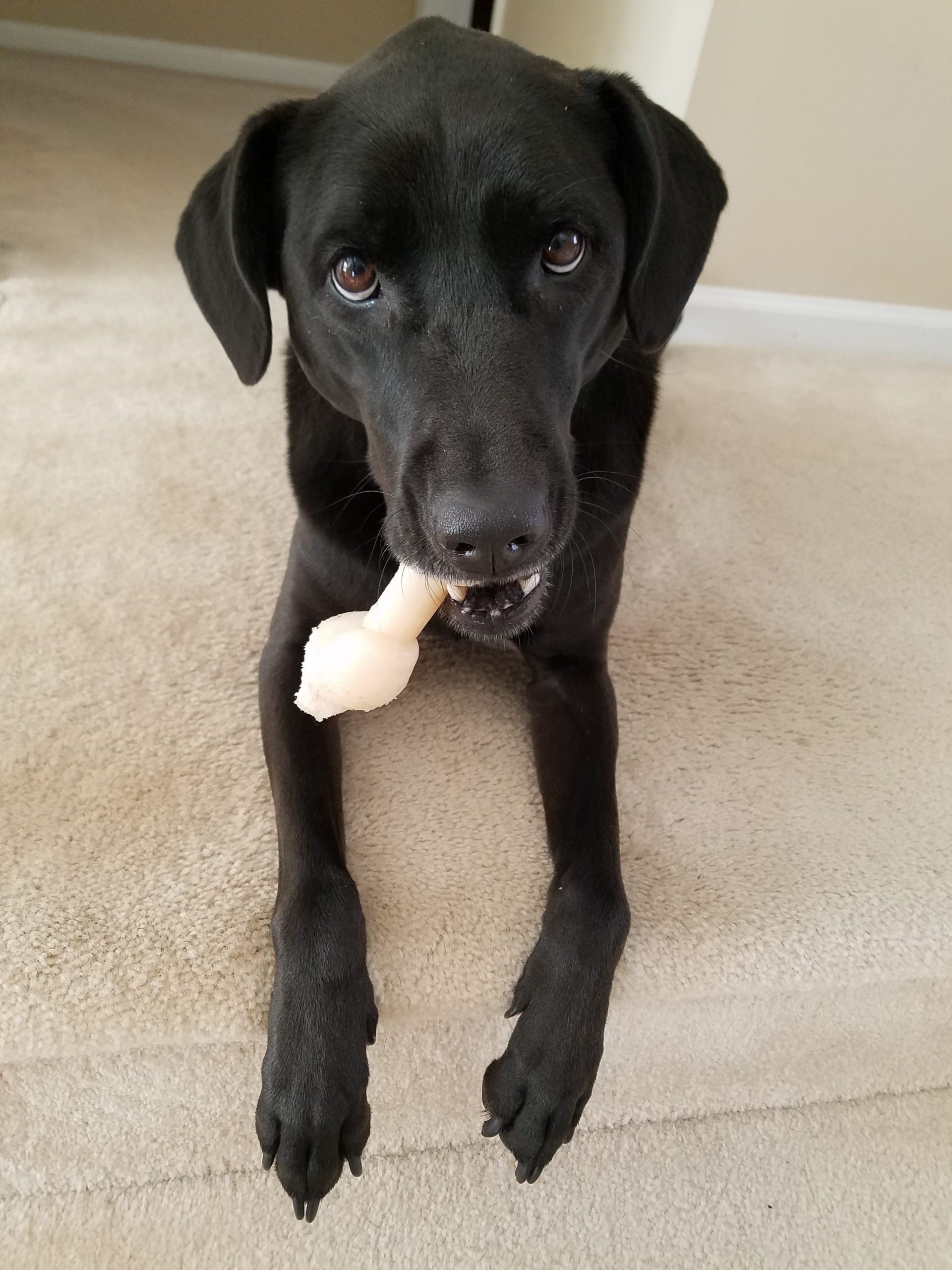 I decided that if the order didn’t strike by the time I got home with Simmie (pictured to the left with her favorite chew toy), I would just buy at the market price. I didn’t want to mess around so much that it would become more expensive.

Had the price quickly spiked to $260 for some reason, I wouldn’t have bought it instantly, as would have been the case with a market order. But if it stayed at $253 or less, it would fill immediately at the market price.

Indeed, it ended up filling at $252.99 – and actually did so in two separate purchases (circled in red). That happens sometimes, but the commission is not doubled (blue).

Why did I do all that rather than just make the market buy? Mostly, I wanted to demonstrate some different options for investors, especially those who might be newer at purchasing stocks.

Limit orders are useful for those who can’t be around to monitor a transaction, and also for those who have determined a price they “must get” to buy or sell a stock.

The risk is that an order might never fill. I actually had that happen to me many times early in my investing journey. I was so determined to get “my price” that I refused to pay even a few more pennies. I ended up missing out entirely … and then buying the companies months (or even years) later at significantly higher prices. 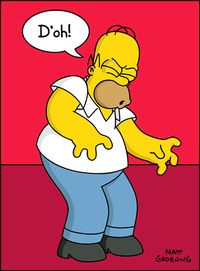 In the case of Tuesday’s MMM buy, the difference between my first limit order ($249.59) and the market price at the open ($255.60) would have been only $24 for the entire purchase – so I knew I wasn’t taking much of a risk no matter where I got it within that range. I also knew I would buy it at some point during the day. For those purchasing dozens or hundreds of shares, price obviously matters more.

As it turned out, not all that long after I executed the buy, 3M’s price drifted under $252. And in the ensuing days, with Mr. Market getting cranky, the price did more than just drift down a little.

But that’s the thing about investing in stocks: Nobody sounds a buzzer to let buyers or sellers know that the high or low price has been reached, darn it!

Taking A Swing At A Big-League Deal

Limit orders can be an excellent way to target a stock in a falling market, and I did just that on Tuesday, Feb. 6 – the day after The Big Swoon.

Nearly a month ago, I had put in a “good-until-canceled” limit order to buy utility Dominion Energy (D), which I had profiled briefly as one of “Five Core Stocks For Any Dividend Growth Portfolio.”

My price had been $74.22, representing a sweet 4.5% dividend yield. I already owned a lot of the stock, so I was willing to be patient – or even to pass on adding more shares entirely – if it didn’t get there.

Come Tuesday morning, “futures” were down again, and Dominion was trending lower pre-market. So I canceled my order and decided to take a swing at getting an even better price.

I immediately put in an order to use all of the funds I had available in that particular account – about $3,282 (not including the commission I would have to pay). I could have bought 44 shares at $74-ish, but I went for an extra share, making $72.93 my maximum price.

Well, the price quickly moved down below $73, and my order struck at 9:38:31 a.m. (blue circle) – about 8 1/2 minutes after open. The red circled numbers show number of shares bought and price paid.

In the grand scheme of things, that extra share isn’t going to make me rich. But it will be $3.34 more in dividends entering my account this year, and those Divvy Dollars will grow and compound over time. Plus, I love getting an extra share of any stock at what I consider a solid value.

If it didn’t reach my price, I still probably would have made a purchase, settling for one fewer share. But I decided to take a swing … and I connected. Dominion Energy closed Tuesday at $74.11.

Mikey, Do Be A Hero

When the market is volatile as it has been, I like to put in a few limit orders at so-called “hero prices” for companies I’m only willing to buy if they are screaming values.

For example, I put in an order for consumer products company Kimberly-Clark (KMB) at $101.26. That price is about 14 times projected 2018 earnings, as well as the 4% yield mark, and it’s nearly 10% below Monday’s closing price. 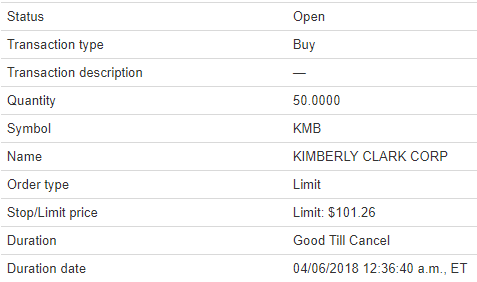 If it hits, great. KMB is a fine company and that’s a wonderful price. If it doesn’t, that’s OK too. I already own a ton of its main competitor, Procter & Gamble (PG).

Again, this is a strategy to be used only if one is willing to swing and miss occasionally. It is no fun to strike out on a stock one really wants – especially if the difference is just a few nickels, dimes or quarters. 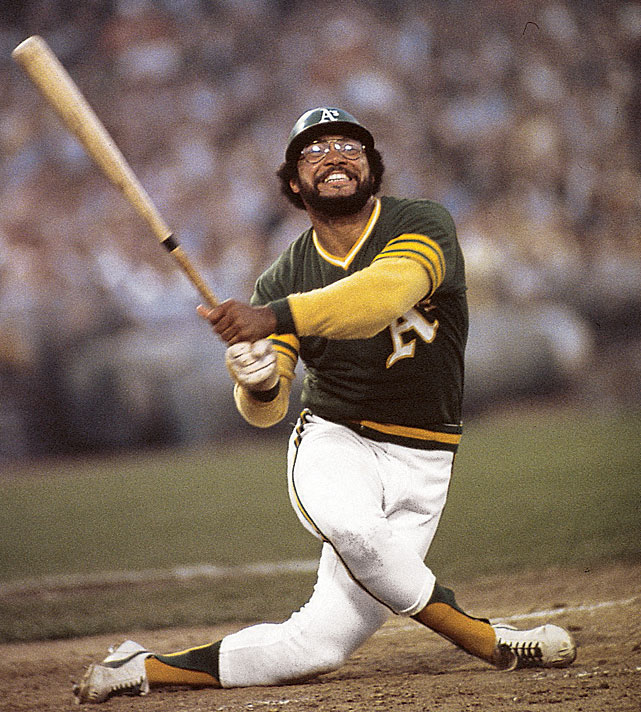 (Reggie Jackson was a high risk/high reward hitter. He is baseball’s all-time leader in striking out, but he also had some big-time home runs during his career. SI.com photo)

Limit orders can be a great way to make sure you don’t spend more than you’re willing to pay for a stock. They also are excellent “babysitters” when you are too busy to monitor market movement.

However, if it is a company you really want to own, don’t be such a stickler that it costs you a legitimate shot at buying it – especially if it already is reasonably valued.

Later this week, I will be choosing the third company for the Income Builder Portfolio. Daily Trade Alert is planning to publish an article about my selection Saturday, Feb. 10.

Disclosure: I own MMM, AMGN, D, PG. This is not a recommendation to buy any stock mentioned.