Nearly a decade ago, even before I knew what Dividend Growth Investing was, I bought a heaping helping of 3M (MMM). I chose the company partly because I knew it had a long history of returning value to shareholders.

I have added to my personal stake in the blue-chip industrial conglomerate several times since … and now I’m happy to say that 3M has been added to the DTA Income Builder Portfolio.

As you can see in the above “snip” from the IBP’s brokerage account, the order actually was executed in two separate buys (as happens occasionally), but only one commission was charged.

I used a limit order – guaranteeing I wouldn’t pay more than $253 per share – because Tuesday’s early market trend made me believe the price might drift down during the day … and it did!

(In my next article, I will thoroughly detail the mechanics of the transaction – kind of a limit-order tutorial.)

As we build this real-time, real-money DGI portfolio from scratch, Daily Trade Alert is making $2,000 available each month for two purchases. Having paid about $933 for the first January buy, Amgen (AMGN), we were able to spend a little over $1,000 for MMM.

Why 3M? Simple: It’s one of the great companies in the world! I made my case for it in my previous article.

Because this order was placed before the next ex-dividend date (Feb. 15), the Income Builder Portfolio will receive $5.44 in “Divvy Dollars” on March 12.

All dividends received from IBP holdings will be reinvested right back into the companies from whence they came. Using a series of clicks within the brokerage account, I elected that fee-free option commonly called “dripping.”

Then, three months later, the Income Builder Portfolio would receive dividends based upon the new share total of 4.022 – making the June payment $5.47. And so on and so on, with the share total compounding for years and years.

Eventually, 3M and Amgen will be but two of the project’s dozens of stocks. As stated in the IBP Business Plan, we are targeting a $5,000 annual income stream within seven years.

It is difficult to find analysts who don’t consider 3M to be overvalued.

As the graphic pulled from the site shows, 3M’s P/E ratio is much higher than its 5-year average (circled in blue). All other metrics, including the forward P/E of 25.1 (red), also appear richly valued. (As highlighted in yellow, Morningstar hadn’t updated the yield to reflect the higher dividend.) 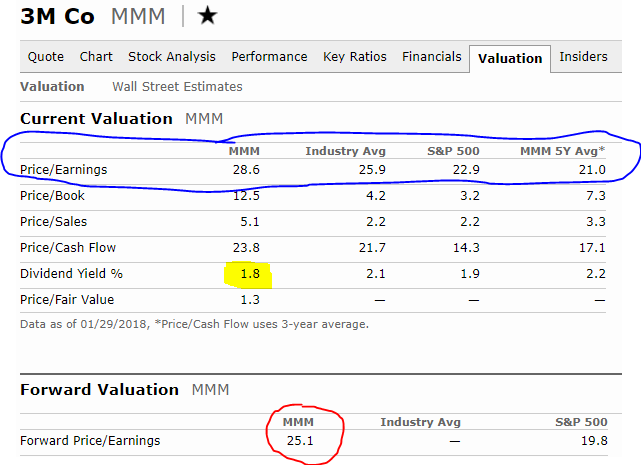 Value Line gives 3M its best Safety score and has placed the company in its model portfolio of “Stocks For Income and Potential Price Appreciation.” It assigns MMM a 2 for “Timeliness” (as circled in red below) and a 1.09 “Relative P/E” (blue).

Timeliness is VL’s measure of expected price performance for the coming 6-12 months, relative to the 1,700 stocks Value Line covers; it’s a 1-5 scale, with 1 being most timely. MMM’s Relative P/E of just over 1 indicates that its P/E ratio is slightly higher than the average of companies in VL’s analytical universe.

Value Line analysts place the upper range of 3M’s price movement at $290 over the next 3-5 years (as circled in green above).

Finally, let’s turn to FAST Graphs – whose founder, Chuck Carnevale, recently labeled 3M as one of the “most expensive stocks” in the Dow Jones Industrial Average Index. 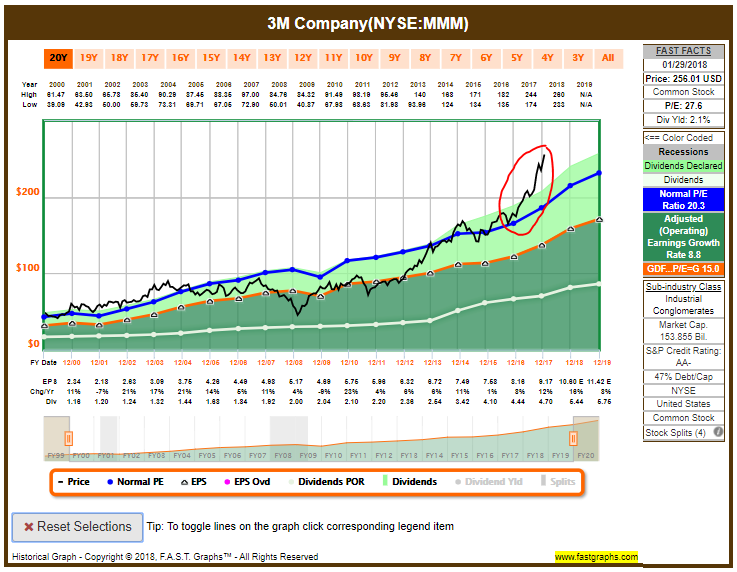 For years after the turn of the millennium, 3M’s valuation stayed in the vicinity of both the orange (15 P/E) and blue (normal P/E) lines. In the last couple of years, however, valuation has spiked as industrial cyclicals have come into favor and as the overall market has kept setting record highs.

If 3M is so overvalued, why did I choose it for the Income Builder Portfolio?

Well, as stated in the Business Plan:

A company’s valuation will be considered before each purchase, but it will be a secondary concern to the perceived quality of the investment.

I consider 3M to be such a high-quality company that I am willing to pay a premium. Plus, analysts have been “wrong” about MMM’s valuation for quite some time now.

And don’t forget that we’re talking about a “starter” position here. The IBP could buy only 4 shares with the money available; the price would have had to retreat by 20% for another share to have been bought.

But $1,000 as we start building a “newbie portfolio”? It hardly seemed necessary to wait for the next recession – which probably will be the next opportunity to buy 5 shares of MMM for a grand.

Given 3M’s excellent management and business model, future buys for the IBP very well might have to be made at prices higher than we paid Tuesday.

My own first MMM purchase – way back when Dubya was using strategery, Jack Bauer was saving the world 24 hours a day, and the iPad wasn’t even a twinkle in Steve Jobs’ eye – was at $74.95 per share.

Since then, I have bought more MMM several times at incrementally higher prices; it has grown to become my second-largest holding, representing roughly 6% of my portfolio.

Obviously, I believe 3M is a wonderful long-term investment. As always, each investor is responsible for conducting his or her own due diligence.

A third stock will be added to the Income Builder Portfolio in two weeks.