A few years from now, when dozens of companies are producing thousands of dollars in annual dividends, I’ll smile and say, “Hey, remember when the DTA Income Builder Portfolio all began?”

Why Amgen? Why not? It’s been an outstanding company for years, and it has been growing its dividend like crazy since 2011. I made a detailed case for AMGN in my previous article.

Amgen pays a quarterly dividend of $1.32 per share. That $5.28 annual payout means these shares were bought at the 2.84% yield point – considerably higher than the company’s 5-year average yield of 2.1%.

Because this order was placed before the next ex-dividend date (Feb. 14), the Income Builder Portfolio will receive $6.60 in “Divvy Dollars” on March 8.

All dividends received from IBP holdings will be reinvested right back into the companies from whence they came – a no-cost process informally called “dripping.” Using a series of clicks within the brokerage account, I elected that option for the AMGN position.

The $6.60 the IBP receives on March 8 will be used to buy new shares. If Amgen stays in the same range as the initial purchase price, that would add .036 shares.

Then, three months later, the Income Builder Portfolio would receive dividends based upon the new share total of 5.036 – making the June payment $6.65.

That extra nickel sure doesn’t sound like much, but it will grow over time.

Plus, AMGN eventually will be one of dozens of stocks held in the IBP, and the compounding effect will be noticeable and appreciated.

And that’s how you build a future income stream … hence the name of this project!

Although the IBP Business Plan states that valuation is only a secondary concern when selecting companies for the portfolio, Amgen does meet the requirements of investors who refuse to buy “overvalued” stocks.

Morningstar’s fair value for Amgen is $193. As this graphic lifted from the site shows, AMGN’s 16.7 price/earnings ratio is considerably lower than its 5-year average. Additionally, Amgen’s forward P/E (based upon this year’s expected earnings) is 14.4.

Meanwhile, Value Line assigns Amgen a 2 for “Timeliness” (as indicated by the number circled in red) and a 0.70 “Relative P/E” (blue).

Timeliness is VL’s measure of expected price performance for the coming 6-12 months, relative to the 1,700 stocks Value Line covers; it’s a 1-5 scale, with 1 being most timely. A Relative P/E of less than 1 indicates that a stock’s P/E  ratio is less than the average of companies in VL’s analytical universe.

Value Line analysts also expect Amgen’s price to move upward into the $240 to $290 range within 3-5 years (as circled in green above). 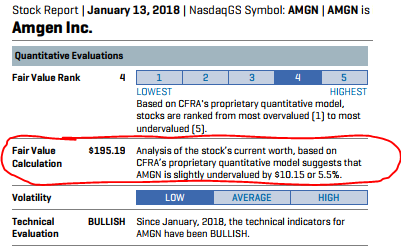 As you can see by the numbers I’ve circled in red, Amgen is trading at just a tad below its normal P/E. (I selected 15 years because that brings the Great Recession into play.) 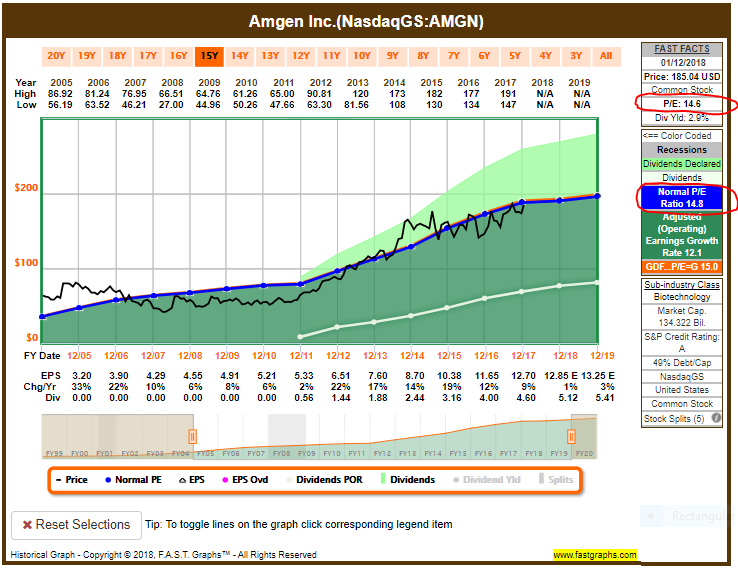 Some DGI practitioners like to use price to free cash flow because a company generally needs to grow its FCF over time to keep increasing its dividend. Amgen’s P/FCF is slightly lower than its 15-year average. 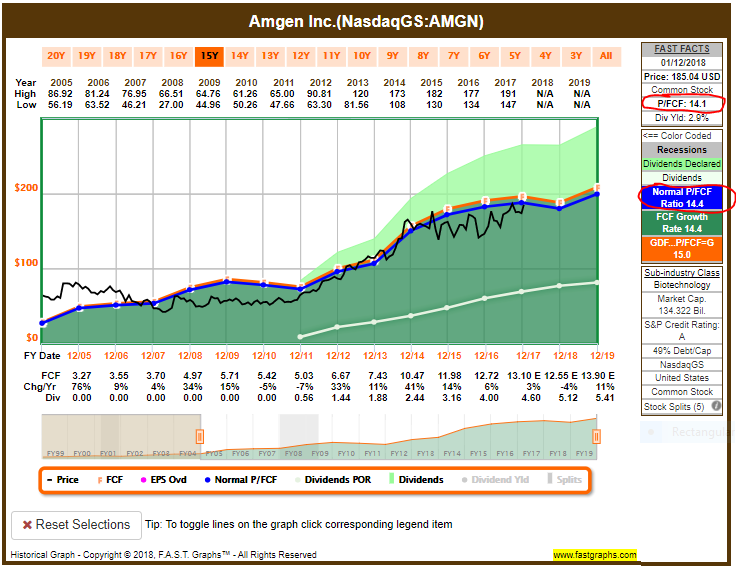 I believe in having “skin in the game.” So if I don’t personally own a stock I choose for the Income Builder Portfolio, I will always buy some shares.

However, Amgen already is my 15th largest position, making up roughly 2.5% of my portfolio.

Obviously, I believe AMGN works as a DGI holding. But as always, each investor is responsible for conducting his or her own due diligence.

A second stock will be added to the IBP in two weeks, as Daily Trade Alert has committed about $2,000 per month toward this long-term project.