Most investors are aware of two trends that many believe are permanently changing the face of retail:

• The reported trend of millennials toward healthy, fresh, farm-to-market food. This has been impacting prepared-food companies such as Smucker (SJM), last month’s Dividend Growth Stock of the Month, and fast-food restaurants such as McDonald’s (MCD).
• The “Amazonification” of retail, which is the trend toward online buying that is supposedly killing malls and all kinds of brick-and-mortar stores.

I will state right up front that if you believe the second trend is permanently killing malls, you don’t need to read the rest of this article, because it is about the premier real estate investment trust (REIT) in outlet malls: Tanger Factory Outlets (SKT).

If you’re still with me, let’s take a dispassionate look at Tanger’s business and see whether it might be a worthy component in a dividend growth portfolio.

Tanger’s Dividend Record
Tanger has paid a cash dividend, and increased it every year, since it went public in 1993. 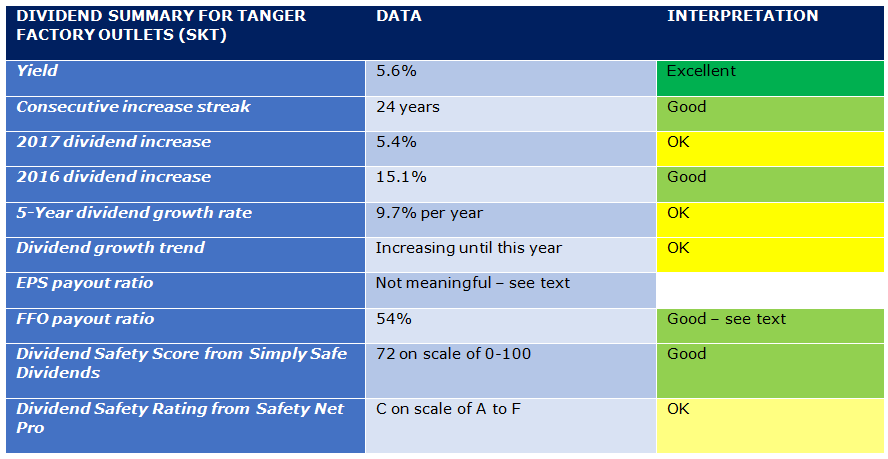 This is a good dividend resume.

The resume’s mediocre points relate to its reduced 2017 dividend increase (5.4%) and its so-so dividend safety score from Safety Net Pro.

That said, there is nothing wrong with this year’s 5.4% increase, especially on top of a good yield to begin with.

Frankly, it is unrealistic to expect a company that has been paying dividends at such a high rate to continue to be able to increase them every year by double-digit percentages.

Tanger’s payout ratio is based on funds from operations (FFO), which is a cash-flow-like metric that is used for REITs instead of reported earnings.

(“Official” earnings, also known as GAAP earnings, is not an insightful metric for REITs, because they have so much capital investment activity and significant depreciation adjustments that distort regular earnings but have no impact on the cashflow a REIT is generating).

At 54%, Tanger’s dividend payout ratio (Dividend / FFO) is in the safe zone. 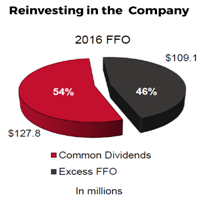 In 1981, Stanley Tanger (1923-2010) pioneered the outlet industry by building the country’s first authentic outlet shopping center in Burlington, North Carolina. The company went public in 1993. It is the only publicly traded outlet mall REIT.

Tanger is now a publicly-traded REIT headquartered in Greensboro, North Carolina. It is fully integrated, self-administered, and self-managed.

Tanger operates and owns, or has an ownership interest in, 44 upscale outlet shopping centers. 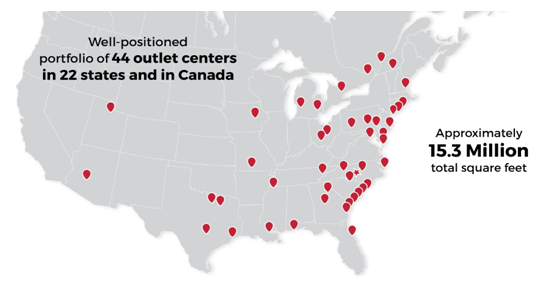 Tanger’s operating properties are located in 22 states and Canada. The properties total about 15.3 million square feet. They contain over 3,100 stores which are operated by more than 510 different brand name companies. Tanger Outlet Centers attract more than 188 million shoppers annually.

Tanger’s long experience in the outlet industry and high number of outlet centers give it an established relationship with many retailers. Tanger’s tenant mix includes many leading designer and brand-name manufacturers. 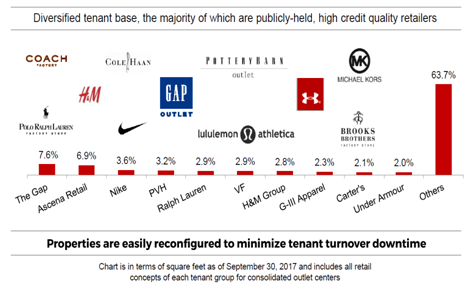 Tanger takes a disciplined approach to building and expansion. It has compiled an impressive record of never falling below 95% occupancy, even during the Great Recession. 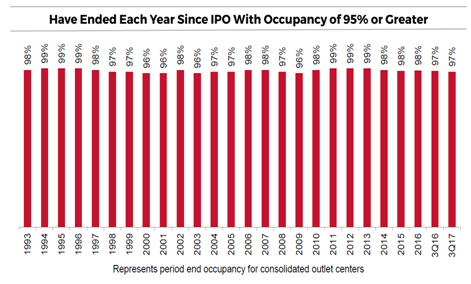 Tanger follows stringent guidelines for buying land, including having at least 60% pre-leasing commitments and receipt of all non-appealable permits prior to acquisition of land or commencement of construction. The company does not build on spec. 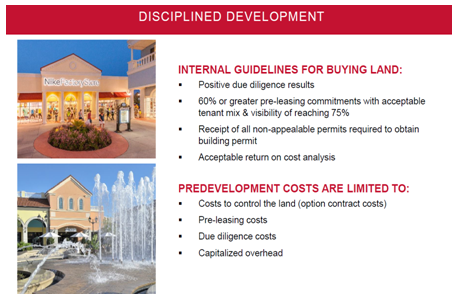 Tanger has also grown through acquisitions. In 2016, Tanger acquired the 42% of an outlet center in Glendale, AZ, that it did not already own for some $40.9 million. In August, it bought out its joint venture partner in an outlet center in Pooler, GA.

Tanger does not plan to deliver a new outlet center during 2018. However, pre-development and pre-leasing efforts are ongoing for projects in the company’s pipeline of development projects.

We are not at risk of having large department store boxes go dark or having to put a tremendous amount of CapEx into re-tenanting lease spaces because we have no department stores. Our properties generally have standard bay depths so we’re more easily reconfigured by moving the demising walls that divide suites to make them larger or smaller as needed. Our industry is not overbuilt.

Outlets remain an important and profitable channel of distribution for our tenants, as evidenced by our high level of occupancy, which was 96.9% as of September 30, 2017. For 56 consecutive quarters our same center net operating income has increased, a feat accomplished by very few public REITs. Given the outlet channel’s appeal with retailers and our fortress balance sheet, we believe Tanger is well-positioned to weather the current headwinds in the retail environment and emerge stronger when the retail cycle turns positive.

Much of your assessment of Tanger’s quality will depend on where you stand on the proposition that online retailing is in the process of killing brick-and-mortar retailing. If you think that proposition is true, you should not invest in a company like Tanger, because obviously its success is dependent on the long-term viability of physical retailing.

More than 90% of Tanger’s revenue comes from direct rental fees.

Tanger’s discipline in expansion and building is reflected in its conservative approach to financing. For example, as detailed in its recent quarterly earnings report, the company:

REITs have to pay 90% of their taxable income to shareholders as dividends in order to maintain their tax-advantaged status as REITs. For most REITs, this means that they are constantly issuing new shares to raise capital, because they have insignificant internally generated money to finance growth.

Tanger issues new shares too. But it also rebuys shares. Let’s look again at the cash flow slide from earlier: 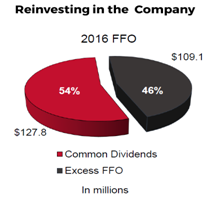 Notice how Tanger is able to retain 46% of its funds from operations (“excess FFO”) for reinvestment in the company. Some of those funds have been recycled into share repurchases. That has allowed Tanger to keep its total shares outstanding flat for several years.

This is unusual for a REIT. For comparison, consider the record of a REIT that many consider the king of REITs, Realty Income (O). This is a more typical share picture for a REIT:

Fewer shares are desirable from a shareholder standpoint, because each share represents a bigger slice of the whole pie. Also, a company with a flat share count can more easily raise its dividend, because dividends are paid per share.

• Both quarterly and year-over-year increases in net operating income
• The repurchase of 1.9 million common shares year-to-date, costing $49.3 million, leaving $75.7 million in its current share repurchase authorization, which runs into 2019
• Debt-to-capitalization ratio of 42%
• Floating-rate debt is 16% of total debt outstanding
• About 91% of total square footage is unencumbered by mortgages

Tanger’s price has plunged over the past year. 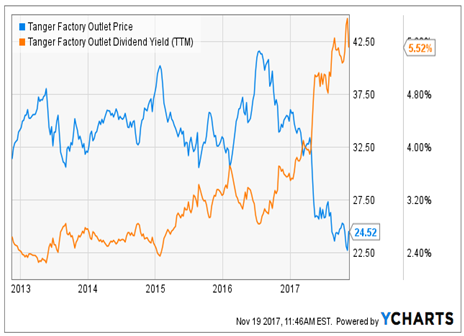 As shown by the blue line in the chart, you can buy a share of Tanger today for less than practically any time in the past 5 years. The probable reason for the year-long price drop is the growing fear among many investors that outlet malls, like other brick-and-mortar retailers, are facing a difficult future as online shopping continues to grow its share of all retail spending. Many mall-based retailers have seen their stock prices drop over the past couple of years.

For potential new dividend growth buyers, the good news is that the price drop, combined with Tanger’s uninterrupted string of dividend increases, has caused Tanger’s yield to skyrocket. For the 5 years shown in the chart, Tanger’s yield has gone from about 2.5% to more than 5.5%.

Let’s see whether the price drop has resulted in Tanger having a good valuation. My 4-step process for valuing companies is described in Dividend Growth Investing Lesson 11: Valuation. Let’s go through the steps.

Step 1: FASTGraphs Basic. The first step is to compare the stock’s current price to FASTGraphs’ basic estimate of its fair value. As explained earlier, the valuation will be based on funds from operations (FFO) rather than offical earnings, because Tanger is a REIT.

The basic valuation estimate uses a standard reference price-to-FFO (P/FFO) ratio of 15, which is shown by the orange line on the following chart. The black line shows Tanger’s actual price. 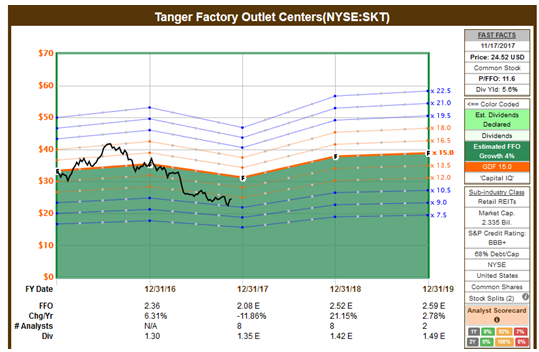 The price is well below the fair-value line. Tanger’s current P/FFO ratio of 11.6 is just 0.77, or 77%, times the reference fair-value P/FFO of 15, suggesting that its stock price is 23% under fair value. 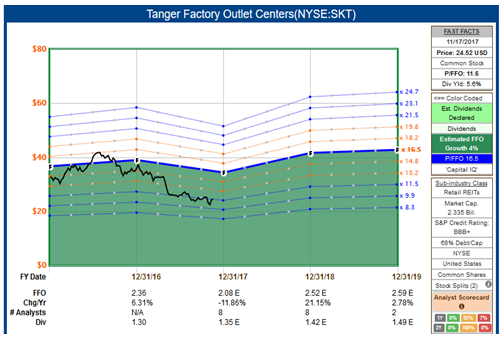 Here, the fair value reference line is in dark blue. It is drawn at a value of P/FFO = 16.5, because that is Tanger’s long-term average valuation going back before the Great Recession.

In their approach, Morningstar makes a projection of all the company’s future profits. The sum of all those profits is discounted back to the present to reflect the time value of money. The resulting net present value of all future earnings is considered to be the fair price for the stock today.

Unfortunately, Morningstar does not rate Tanger. (Tanger is a relatively small company.)

As a substitute, I will use CFRA’s most recent report on Tanger. CFRA uses its own proprietary valuation method.

CFRA believes that Tanger is overvalued. While their full reasoning is not explained, it seems clear that the analysts at CFRA believe that Tanger will be challenged by the long-term changing shopping habits that we have discussed – from physical stores to online.

According to Morningstar, Tanger’s 5-year average yield has been 2.9%. The current yield of 5.6% is nearly double that.

When I use this 4th method, I cut off the difference at 20%, because of the indirectness of the approach. Using 20%, the stock is undervalued, and I calculate a fair price of $31.

Beta measures a stock’s price volatility relative to the S&P 500. I like to own stocks with low volatility, because they present fewer occasions to react emotionally to rapid price changes, especially sudden price drops that can induce a sense of fear.

Tanger has been a low-volatility stock. Its 5-year beta is 0.5, meaning that it has been just half as volatile than the market. This is a positive factor.

In their report on Tanger, CFRA indicates 10 analysts whose average recommendation is 3.2 on a scale of 5. This translates to “hold.” This is a neutral factor.

We covered Tanger’s flat share-count situation earlier. This is a neutral factor generally, but unusual (and slightly positive) for a REIT.

• Decent dividend resume: 5.6% yield, 24 years of consecutive increases, moderate payout ratio, and seemingly adequate dividend safety.
• Best-of-type business model for its industry – outlet malls. Careful about expansion, tries not to get ahead of its markets. Won’t build until it already has rental commitments.
• Solid but not spectacular financials. Conservative financial philosophy.
• Steady share count, which is rare for a REIT.
• Low volatility compared to the market.
• Stock is undervalued.

• Dividend increase dropped from 15% to 5% in 2017.
• Long term business model may be up against strong secular headwinds in the form of changing shopping habits from in-person to online.

As always, this is not a recommendation to buy, hold, or sell Tanger Factory Outlets. Perform your own due diligence. And always be sure to match your stock picks to your financial goals. Disclosure: I own a small stake in Tanger in my Dividend Growth “ETF.”