You are undoubtedly familiar with Starbucks (SBUX). Starbucks is the world’s premier roaster and retailer of specialty coffee. It sells globally through almost 30,000 retail stores as well as other retail channels. The company was founded in 1985 and went public in 1992.

Starbucks was my Dividend Growth Stock of the Month about a year ago. I decided to revisit it this month, because its valuation has improved lately, the result of a $10 (15%) price drop over the past couple of months.

In the year since I last wrote about Starbucks, its price has advanced less than $2 per share, while its dividend increased by 25%. The stock has a 5-year dividend growth rate of 25% per year, and its next increase is expected to be announced in November. 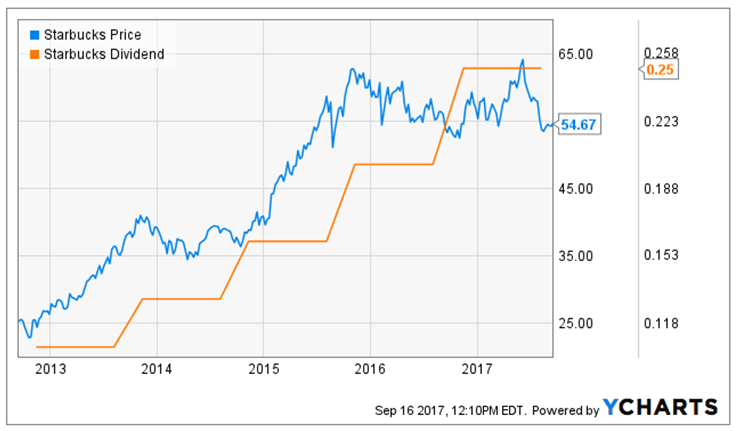 Disclosures: While Starbucks’ yield has been too small for my public Dividend Growth Portfolio, my wife and I own Starbucks in our personal dividend growth portfolio. And practically every day, I go to Starbucks and order mocha made the way I like it. Starbuck’s ability to keep selling the same things day after day to the same customers is at the heart of their business model. 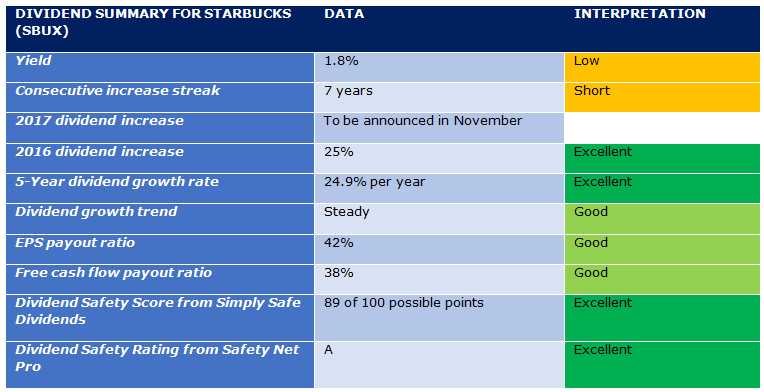 This is a very good dividend resume. Its 2 weak points are the relatively low yield (1.8%) and the short record of dividend increases (7 years). Whether a sub-2% yield is “sufficient” is a question for each individual investor. Companies with low yields but rapid dividend increases are often judged to be excellent long-term investments.

Everything else about the dividend resume is good or excellent:

• The company began paying dividends in 2010 and has raised the dividend every year since.
• The 5-year dividend growth rate of 25% per year is high. Last year’s increase was 25%.
• Comfortable payout ratios.
• Dividend Safety Score of 89 from Simply Safe Dividends and “A” from Oxford Club’s Safety Net Pro. These grades mean that both organizations rate Starbucks’ dividend as very safe and extremely unlikely to be cut. For more insight on dividend safety, see Dividend Growth Investing Lesson 17.

Starbucks was founded in 1985 and is headquartered in Seattle, WA. It went public in 1992. One of its co-founders, Howard Schultz, is now Executive Chairman, after a transition in April that elevated President and COO Kevin Johnson to the CEO position.

From its beginnings as a single-location coffee roaster, Starbucks has grown into the world’s largest manufacturer, preparer, and seller of coffee, tea, related beverages, food items, and related merchandise.

The company is organized and operates through these segments:

Starbucks has about 26,700 stores as the end of its fiscal 3rd quarter in June.

A significant part of Starbucks’ success is related to the “Starbucks Experience” for customers.

The company can control that experience, because most of its stores are company-owned.

In recent years, it has emphasized hiring veterans and their family members.

Starbucks’ products include the following:

Some highlights from Starbuck’s most recent quarterly report:

• It will assume full ownership of the Mainland China market. It is acquiring the 50% of Shanghai Starbucks Coffee Corporation that it didn’t already own from two joint venture partners. The decision was influenced by the fact that customers in China have embraced the Starbucks brand and customer experience since the company opened its first store there 18 years ago. Mainland China is now Starbucks’ largest and fastest growing international market (2,800 stores in 130 cities, up from 2,300 stores a year ago). The acquisition is the largest in the company’s history.
• It will close all of its 379 Teavana retail stores. Many of them have been persistently underperforming. Most stores will close by Spring next year.

Beyond those initiatives, Starbucks has continued growth potential from:

The company’s overall strategy for creating shareholder value is illustrated on this slide from its last annual report. 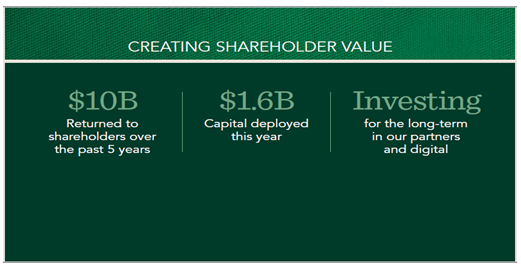 The money returned to shareholders comes in the form of dividends and share repurchases. Capital deployment and investing includes opening new stores as well as investments in digital initiatives including mobile pay, mobile order-and-pay, and My Starbucks Barista (voice ordering through digital devices).

Morningstar gives Starbucks a wide-moat rating (its highest), based on its strong brand that evokes a high-end product and store experience and supports high pricing; innovative mobile, digital, and rewards programs; international expansion opportunities; and strong employee relations that hold attrition levels down and contribute to the customer experience through knowledgeable and familiar staffers.

One in 6 U.S adults received a Starbucks holiday gift card during the 2016 holiday season. Starbucks is #3 on Fortune’s World’s Most Admired companies.

Starbuck’s Financials
Starbucks is a fast-growth company. This graph shows its total revenue and EPS (earnings per share) growth trajectories over the past 10 years. 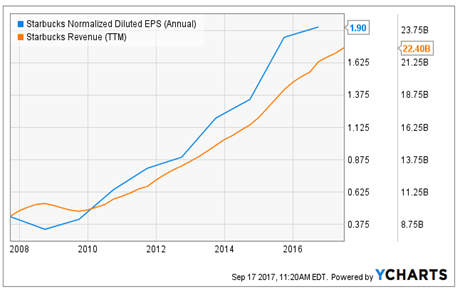 The company’s fast growth has not come at the expense of profitability. ROE (return on equity) is a standard measure of operating efficiency. It is used to judge company efficiency, indicating how effectively the company uses shareholders’ capital to generate profits.

Starbuck’s ROE is 48%, which is better than average. The average ROE for all Dividend Champions, Contenders, and Challengers is 15%. And as you can see from this chart, with the exception of a stumble in 2013, Starbucks’ ROE has been trending generally upwards for several years. 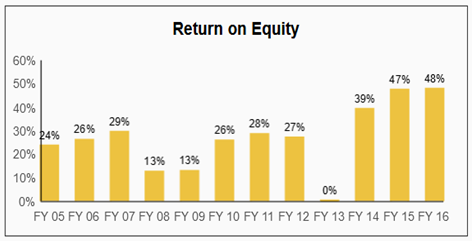 Can Starbucks keep growing earnings? Analysts think they will. Forward estimates from analysts covering the company average out to expected EPS growth rate over the next 3-5 years of 15% per year. That is well above the average of 9% for all Dividend Champions, Contenders, and Challengers.

Starbuck’s free cash flow has generally been healthy and growing, again with a one-year stumble in 2014. The company has generated positive free cash flow in 11 of its last 12 fiscal years. Dividends come from cash flow.

Starbucks’ debt-to-equity (DE) ratio is relatively modest at 0.67, which is well below the average of 1.3 for all Dividend Champions, Contenders, and Challengers. Unfortunately, the company’s use of debt has been rising the past few years. 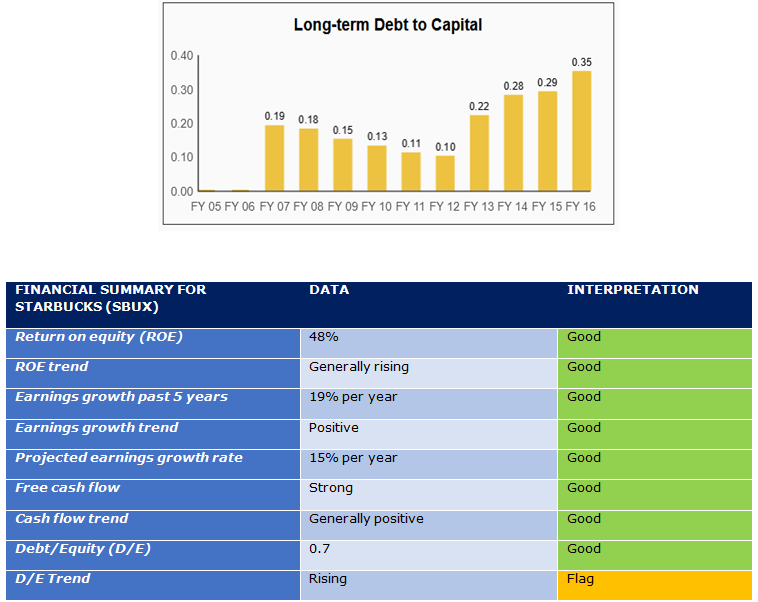 Starbuck’s Stock Valuation
You can buy a share of Starbucks today for the same price as a year ago or even 2 years ago. While that has meant poor total returns for investors who held the stock, it hasn’t affected dividend growth, which has been 15% per year.

The good news for investors is that Starbuck’s flat price has improved its valuation for new buyers. My 4-step process for valuing companies is described in Dividend Growth Investing Lesson 11: Valuation.

That basic estimate is based on a standard reference price-to-earnings (P/E) ratio of 15, which is shown by the orange line on the following chart. The black line shows SBUX’s actual price. 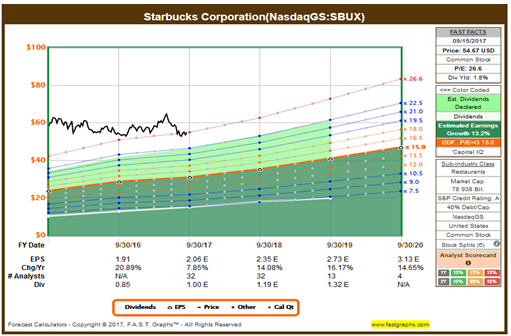 By this first valuation step, Starbucks is vastly overvalued. The current P/E ratio of 26.6 is 1.77 times, or 77% higher than, the reference fair-value P/E of 15.

It could be argued that the reference value of P/E = 15 is too low for a fast-growth company like Starbucks. FASTGraphs itself often uses a P/E equal to the long-term company growth rate, as illustrated by its “main” graph for Starbucks: 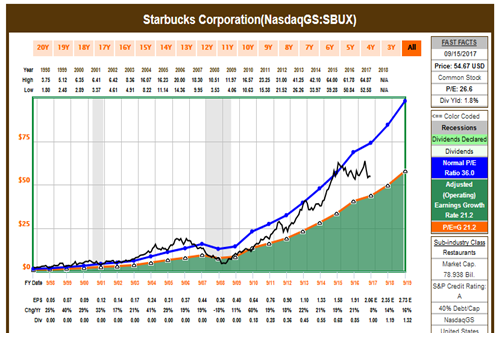 You will note that the orange line on this chart is drawn at P/E = 21.2, corresponding to Starbucks’ historical growth rate (see the orange panel at the right edge of the graph). If we were to use 21.2 as the reference “fair” valuation, Starbucks would be considered overvalued by just 25%, and its fair price would compute to $44.

For consistency with other stocks that I have written about, I will stick with the P/E = 15 convention for Starbucks. That said, we will see that our other valuation methods yield significantly different results.

Step 2: FASTGraphs Normalized. The second valuation step is to compare Starbuck’s price to its own long-term average P/E ratio. This gives us a picture based on the stock’s long-term market valuation instead of the market’s long-term valuation. 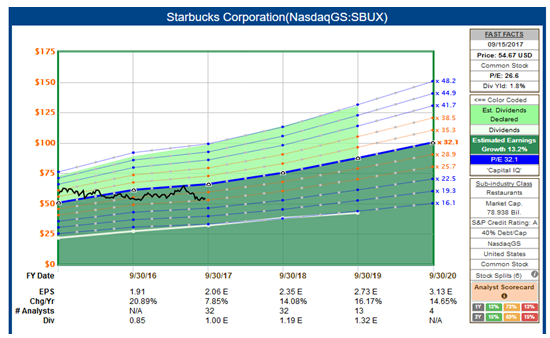 Here, the fair value line is in dark blue. It is drawn using a “fair” P/E ratio of 32.1, because that is Starbuck’s long-term average valuation going back before the Great Recession. The market undoubtedly assigned such a high P/E ratio because Starbucks has been such a fast-growing company.

In their approach, Morningstar makes a projection of all the company’s future profits. The sum of all those profits is discounted back to the present to reflect the time value of money. The resulting net present value of all future earnings is considered to be the fair price for the stock today.

Morningstar thinks the company is undervalued. On their 5-star system, they give 4 stars and calculate a fair price of $66.

According to Morningstar, Starbucks’ 5-year average yield has been 1.3%. The current yield of 1.8% is 38% above that. Not only that, Starbucks will announce a dividend increase shortly, which will increase the yield further pending an upward movement in the stock’s price.

When I use this 4th method, I cut off the difference at 20%, because of the indirectness of the approach. Using 20%, the stock is undervalued, and I calculate a fair price of $66.

As a point of comparison, CFRA (formerly S&P Capital IQ) calculates a fair value of $48 for Starbucks shares.

Beta measures a stock’s price volatility relative to the S&P 500.

I like to own stocks with low volatility, because they present fewer occasions to react emotionally to rapid price changes, especially price drops that can induce a sense of fear.

Starbucks has been a low-volatility stock.

Its 5-year beta is 0.8, meaning that it has been 20% less volatile than the market. This is a positive factor.

I determined analysts’ recommendations from data collected by CFRA.

Their most recent report on Starbucks averages the recommendations of 34 analysts.

The average of their recommendations comes out to 4.3 on a 5-point scale, where 4 = Buy/Hold and 5 = Buy. To me this is a minor positive point.

Starbucks has an ongoing share-repurchase program. It repurchased 3.5 million shares of common stock in Q3 FY17, for example. About 95 million shares remain available for purchase under current authorizations. This chart shows SBUX’s share count over the past 10 years.

I rate this as a neutral factor, because while the share count is indeed declining, the rate of decline is quite slow.

And here is the only real negatives:

• Yield is low at 1.8%, offset by high annual growth.
• Dividend growth streak of 7 years is not very long and has not been tested by a recession.

As always, this is not a recommendation to buy, hold, or sell Starbucks. Perform your own due diligence. And always be sure to match your stock picks to your financial goals.