You are probably familiar with Lowe’s (LOW), the home-improvement retailing giant. Lowe’s is a Fortune 50 company serving more than 17 million customers a week in the United States (about 94% of sales), Canada, and Mexico. Its 2016 sales were $65.0 billion. Lowe’s operates or services more than 2,300 home improvement and hardware stores and employs over 290,000 people. Lowe’s was founded in 1946, went public in 1961, and is based in Mooresville, N.C.

Despite a steady string of annually increasing earnings, Lowe’s stock price has been flat over the past 2+ years. You can buy a share today for the same price as you would have spent in early 2015. 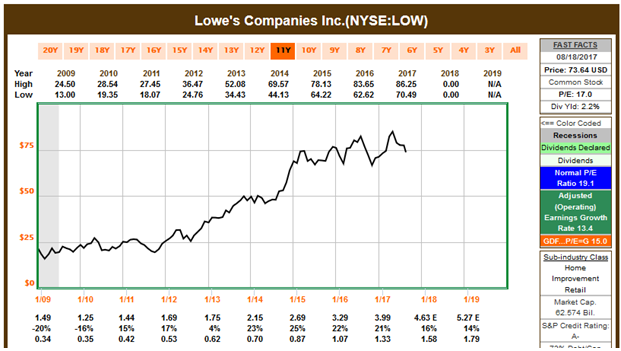 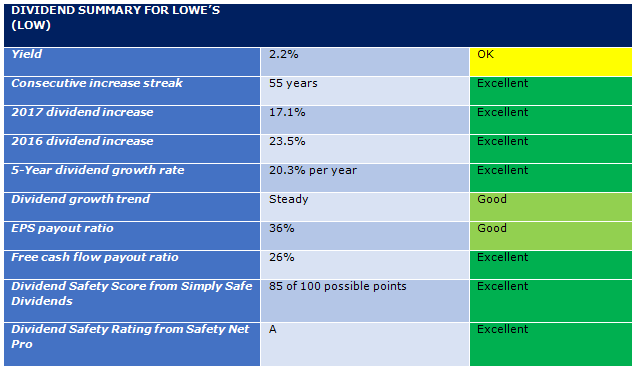 This is one of the best dividend resumes that we have seen.

The best parts about it are:

• 55 years of consecutive increases. John F. Kennedy was president when Lowe’s began its uninterrupted string of annual dividend increases. Lowe’s has increased the dividend every year since going public in 1961.
• 5-year dividend growth rate of just over 20% per year.
• Comfortable payout ratios.
• Dividend Safety Score of 85 from Simply Safe Dividends and “A” from Oxford’s Safety Net Pro. These grades mean that both organizations rate Lowe’s dividend as very safe and extremely unlikely to be cut.

Lowe’s dividend policy is an entrenched part of its business. The company targets an earnings payout ratio of 35%, which leaves plenty of cash left over to grow the business and make attractive acquisitions. It pinpoints dividends as part of its basic strategy for capital allocation priorities.

The only “problem” with Lowe’s dividend is its relatively mediocre yield of 2.2%. If that can be considered sufficient (which is a question for each investor), it would be hard to find a dividend record better than Lowe’s.

Lowe’s offers a wide selection of national brand-name merchandise complemented by a number of private brands.

National brands include such names as Whirlpool, GE, Samsung, Stainmaster, Dewalt, and Nest.

The company recognizes that such services help build customer trust and loyalty.

Lowe’s also recognizes that it must continue to evolve with customer needs, including evolving to connect with customers whether they choose to build relationships in stores, online, or in their homes or at jobsites.

Lowe’s also markets to professionals and has worked over the past few years to deepen those relationships via improvements in inventory depth, brand assortment, and the strength of service offerings. Its strategy presentation emphasizes professional customers as a potential area of significant growth. 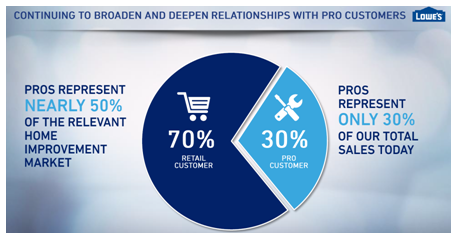 Lowe’s Financials
ROE (return on equity) is a standard measure of operating efficiency. It is used to judge company efficiency, indicating how effectively the company uses shareholders’ capital to generate profits.

Lowe’s ROE is 48%, which is better than average. The average ROE for all Dividend Champions, Contenders, and Challengers is 15%. And as you can see from this chart, Lowe’s ROE has been trending upwards for several years.

There is a footnote to that story. Lowe’s debt rates have been rising for the past several years. High debt inflates ROE.

Lowe’s is usually quite profitable. This graphic shows how Lowe’s earnings per share (EPS) have fared since before the Great Recession.

While the recession took its toll on earnings growth, Lowe’s has recovered well since then. And as we saw earlier, even though its profits shrank during the recession, Lowe’s never stopped raising its dividend every year.

Forward estimates for earnings growth come from analysts covering the company. The expected growth rate over the next 3-5 years is about 15% per year, which is above the average of 9% for all Dividend Champions, Contenders, and Challengers.

It surprised me to discover that Lowe’s carries a high debt load, and that it has been increasing for several years. Not only does high debt goose the company’s ROE, but it also appears that with its strong business and cash flow, Lowe’s could easily self-finance with far less debt.

Lowe’s debt-to-equity (DE) rate stands at 2.9, which is far above the average of 1.2 for all Dividend Champions, Contenders, and Challengers. Not only that, Lowe’s use of debt has risen steadily in the past few years. We have seen debt loads rise in the era of low interest rates across many companies, but Lowe’s has been at the leading edge of the trend. 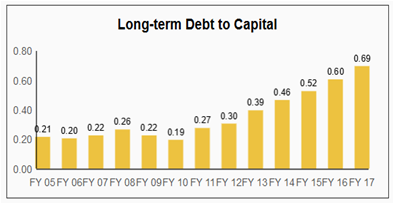 Normally I would color a “flag,” such as Lowe’s rising debt trend, with orange to indicate caution. In this case I colored it red, because Lowe’s debt level is already so high. The company is paying hundreds of millions of dollars per year in interest payments.

Lowe’s Stock Valuation
As mentioned at the beginning, Lowe’s price has been flat for more than 2 years. Why? My guess is that the stock simply got ahead of itself and became overvalued. What we have seen over the past 2+ years is probably a mean reversion, with Lowe’s stock price slowly returning toward more normal valuation levels.

The good news for investors is that Lowe’s flat price has allowed its earnings and financials to catch up somewhat. That will be apparent in the following graphs.

That basic estimate is based on a standard reference price-to-earnings (P/E) ratio of 15, which is shown by the orange line on the following chart. The black line shows LOW’s actual price. 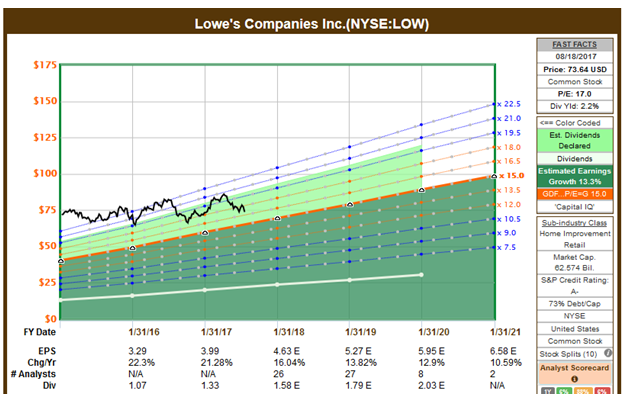 Lowe’s price lies above the orange fair-value reference line, meaning that by this method, Lowe’s is still overvalued despite its price being basically flat for more then 2 years.

This method suggests a fair price of $65 compared to the stock’s current price of about $74 per share.

Step 2: FASTGraphs Normalized. The second valuation step is to compare LOW’s price to its own long-term average P/E ratio. This gives us a picture based on the stock’s own long-term market valuation instead of the market’s valuation as a whole. 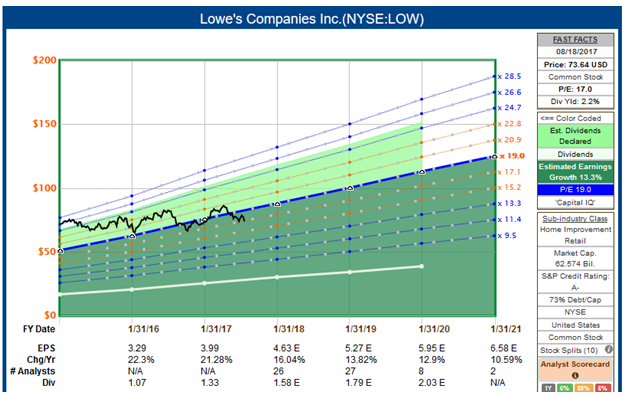 Here, the fair value line is in dark blue. This approach presents a different perspective: Now the actual price is below the fair-value line. That is because LOW’s long-term average P/E (shown in dark blue on the right) has been 19.0. In other words, historically the market has valued Lowe’s more than the average stock in the market.

Morningstar also thinks the company is undervalued. On their 5-star system, they give 4 stars and calculate a fair price of $93.

When I use this 4th method, I cut off the difference at 20%, because of the indirectness of the approach. Using 20%, I calculate a fair price of $92.

As a point of comparison, CFRA (formerly S&P Capital IQ) calculates a fair value of $88 for Lowe’s shares.

Beta measures a stock’s price volatility relative to the S&P 500. I like to own stocks with low volatility, because they present fewer occasions to react emotionally to price changes, especially price drops that can induce a sense of fear.

Lowe’s is an average stock when it comes to volatility.

Its beta, at 1.1 over the past 5 years, means that the stock has been about as volatile as the market as a whole.

This is a neutral factor.

I determined analysts’ recommendations from data collected by CFRA.

Their most recent report on Lowe’s averages the recommendations of 30 analysts.

The average of their recommendations comes out to 3.9 on a 5-point scale, where 4 = Buy/Hold and 5 = Buy. To me this is a minor positive point.

Lowe’s has been steadily buying back shares for years and reducing its overall share count. I like to see this, because it means that the dividend pool is spread over fewer and fewer shares.

I am impressed enough by Lowe’s to consider it for the upcoming dividend reinvestment cycle in my Dividend Growth Portfolio. I normally do not invest in stocks with yields under 2.7%, but Lowe’s has many quality factors in its favor that may overcome that hurdle.

As always, this is not a recommendation to buy, hold, or sell Lowe’s. Perform your own due diligence. And always be sure to match your stock picks to your financial goals.