In January, 2015, I wrote my first Dividend Growth Stock of the Month article for Daily Trade Alert. The idea behind the series has been to look at solid dividend growth companies that you might want to consider for your own portfolio.

The very first stock that I selected was Dividend Champion AT&T (T). “Ma Bell” is again the selection for this month. It’s the first time that I have revisited a stock in the series. I’m coming back to it now, because I think it continues to be a fine stock for dividend growth investors.

How Has T Done Since the Original Article?

In that 2015 article, this was my conclusion about AT&T:

I think AT&T is better than OK. I think it is a terrific stock for dividend growth investors that are happy with its high yield and slow but steady growth. I would like to be able to buy it at a better valuation, but even at today’s price, it yields almost 6%, which is more than three times the yield of a 10-year Treasury.

How has AT&T done since then?

[ad#Google Adsense 336×280-IA]In terms of dividends, it has continued to increase its payout every year.

That’s a result of T’s price rising faster than its dividend during that time.

T’s current yield on cost (had you bought it then) is up to 6.6% per year. (Yield on cost is the current dividend payout rate divided by the original price.) 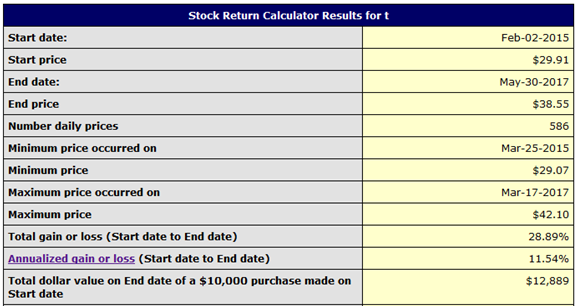 Here is what that looks like in chart form (from Dividend Channel): 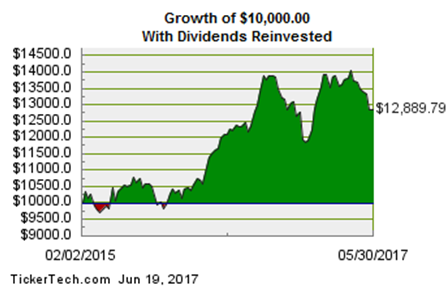 As you can see, AT&T’s price has been dropping over the past few months. I got curious to see whether that price decline has brought T into a fair-price range similar to what we saw in 2015. So let’s take a look at AT&T as a dividend growth investment today. 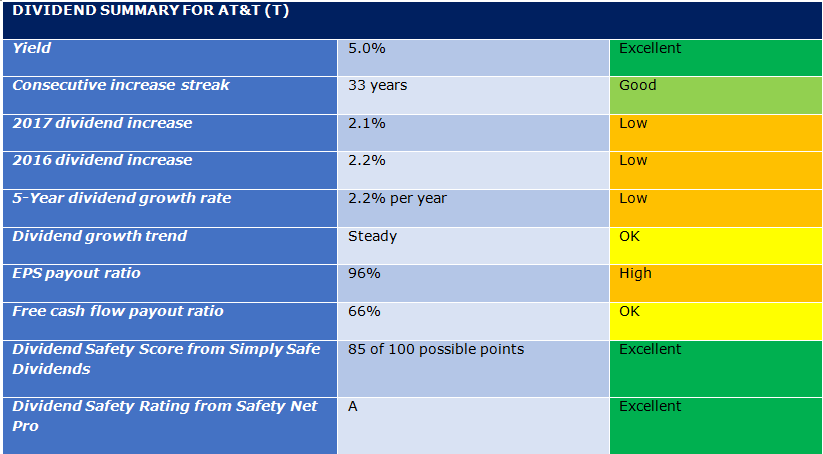 The table clearly shows AT&T’s dividend position in the universe: It is a high-yield, slow-growth dividend stock. Its best features are:

T’s weakest feature is its slow rate of dividend growth. In fact, AT&T has been growing its dividend a penny per share per quarter (or $0.04/year) since 2008.

The following statement that I made in 2015 is still true today:

AT&T offers a clear tradeoff: You get a much higher yield to begin with, but the dividend has been growing pretty slowly. Whether you like that tradeoff is purely up to you. No one else can tell you whether AT&T is “better” for you than, say a stock with a lower yield…but a faster growth rate.

You may have noticed AT&T’s high EPS payout ratio. Normally 96% would be alarming, but it’s not with a company that makes high capital expenditures every year, as AT&T does. Depreciation charges reduce the company’s earnings per share on paper, which raises the payout ratio.

The better indicator is the payout ratio based on cash flow, which is a comfortable 66%. That’s why the dividend safety scores are so good. The following graphs of earnings and cash flow show how T’s cash flow is steadier than its earnings.

AT&T is the largest telecommunications company in the world. Its annual sales of $162 billion are about 30% more than Verizon (VZ).

Consumer Mobility provides nationwide wireless services, including high-speed Internet, video entertainment, and home monitoring services. T is the country’s second-largest wireless provider, pulling in slightly less revenue than Verizon. Between them, T and Verizon account for about 70% of the domestic wireless market. Wireless is a highly competitive business, with battles being raged constantly over network quality, coverage, and price.

The International segment provides entertainment services in Latin America and wireless services in Mexico. It provides only 2% of sales.

AT&T has been evolving its business model since the 2015 article. Its telecommunications revenue continues to shift from land-based phones to mobile. There is clearly a secular shift away from wired phones, and part of the shift means losing not only wireline phone customers but also wired (DSL) Internet customers too. Cable outfits are picking up those customers. Nevertheless, AT&T is expanding its “fiber-to-premises” services, largely to satisfy commitments it made when it acquired DirecTV. The commitments expire in mid-2019.

Beyond that shift, T moved into content when it added DirecTV a couple of years ago. T is attempting to mold itself into a content + communications company rather than just owning communications “pipes.”

In furtherance of the content goal, AT&T is in the process of acquiring Time-Warner (TWX), which will provide another boost in content. Regulatory approval is expected in 2017 for the $109 billion transaction. When completed, the Time-Warner acquisition will bring content diversification and attractive brands that include TNT, TBS, CNN, Cartoon Network, HBO, and Warner Bros. Entertainment.

T’s expansion into content creates opportunities to bundle services to customers as well as leverage better deals with content providers. The jury is still out on whether this strategic thrust will work. For example, can video content drive wireless customer growth? Customers still demand access to content from other sources.

Morningstar awards T a narrow moat rating. They explain that the moat rating is largely based on AT&T’s cost advantages and efficient scale of its wireless and wireline businesses. T’s costs are spread over a huge subscriber base. The cost advantage allows T to continue spending aggressively on network improvements, marketing, additional spectrum, and customer service.

AT&T’s Financials
ROE (return on equity) is a standard measure of operating efficiency. It is one metric used to judge company efficiency, indicating how effectively the company uses shareholders’ capital to generate profits.

AT&T’s ROE is 11%, which is not very high. The average ROE for all Dividend Champions is 22%. As you can see from this chart, T’s ROE tends to hop around from year to year.

AT&T uses quite a bit of debt to finance its operations, although many companies do that in these days of low interest rates. T’s D/E (debt to equity) ratio of 1.1 is actually less than the average for all Dividend Champions (1.3) and low for a telecom company. For comparison, Verizon’s D/E ratio is 5 times higher (worse) than AT&T’s.

AT&T’s 5-year earnings growth rate has been 26% per year, which is excellent. That said, earnings growth is another metric that hops around from year to year, so the growth measured over a particular 5-year period can vary quite a bit from the previous or next 5-year period.

Forward estimates for earnings growth come from analysts covering the company. The expected growth rate is 8% per year, which is a little under the average of 9.5% for all Dividend Champions.
As mentioned earlier, cashflow is a better metric than earnings for measuring the profitability of companies with high capital expenditures such as AT&T. As shown in the following chart, T’s free cash flow is healthy and invariably positive despite year-to-year variations.

AT&T’s Stock Valuation
As mentioned earlier, AT&T’s price has been generally falling for the last several months. Let’s see if that brings it into fair-value range. 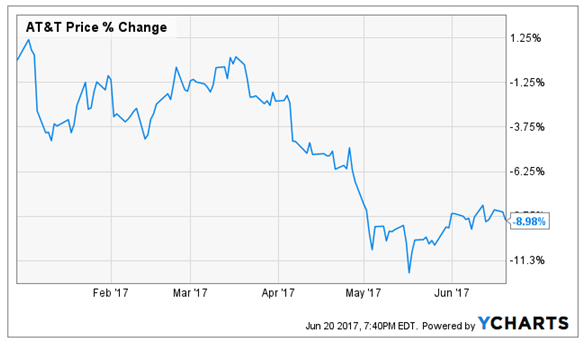 That basic estimate is based on a standard reference price-to-earnings (P/E) ratio of 15, which is shown by the orange line on the following chart. The black line shows T’s actual price. 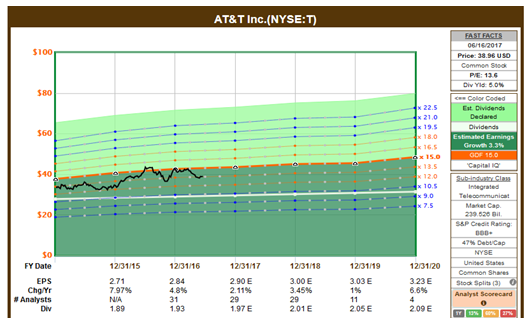 Indeed, the price drop this year has brought T’s price down below the fair-value reference line.

T’s current price is 91% of its fair value estimate according to this first valuation step. I calculate that number by dividing T’s actual P/E ratio (13.6) by the ratio of 15 that was used to draw the orange line.

I consider anything within 10% in either direction to indicate fair value, so I would call AT&T fairly valued using this first step.

This method suggests a fair price of $43 compared to the stock’s current price of about $39 per share.

Step 2: FASTGraphs Normalized. The second valuation step is to compare T’s price to its own long-term average P/E ratio. This gives us a different perspective based on the stock’s own long-term market valuation instead of the market’s valuation as a whole. 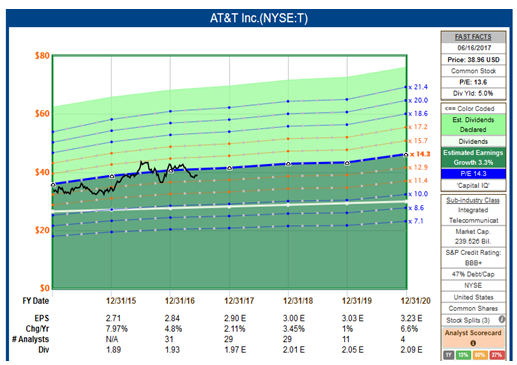 Here, the fair value line is in dark blue. We can see from the dark blue box on the right that T’s long-term average P/E has been 14.3. In other words, historically the market has valued T less than the average stock (at 15). Undoubtedly this is because of T’s slow growth nature. The market usually values slow-growth stocks lower than high-growth stocks.

Using this method, AT&T is 5% undervalued, which again I would call fair. This method suggests a fair price of $41.

On Morningstar’s 5-star system, T gets 3 stars, meaning that they think the company is about fairly valued. They calculate a fair price of $40.

As you can see, all 4 valuation methods yield pretty similar results.

Beta measures a stock’s price volatility relative to the S&P 500. I like to own stocks with low volatility, because they present fewer occasions to react emotionally to price changes, especially price drops that can induce a sense of fear.

AT&T is a low-volatility stock. Its beta of 0.5 indicates that it has been just 50% as volatile as the market. I consider this to be a good factor.

With its strong capital needs, especially with continued capital requirements for building its network and the Time-Warner acquisition pending, T’s share count has risen recently, although its longer term trend has been slightly down.

This is a neutral factor.

As always, this is not a recommendation to buy, hold, or sell AT&T. Perform your own due diligence. And always be sure to match your stock picks to your financial goals.

Disclosure: I own T in my Dividend Growth Portfolio.