This month’s Dividend Growth Stock of the Month is another company that I included in the Dividend Growth Portfolio “ETF” that I launched in January at Motif Investing. You can see the full portfolio by clicking here. (If you are visiting Motif for the first time, click on the ad at the bottom of this article to take advantage of the offer presented there.)

These are the stocks in that portfolio that I have covered recently:

This month’s stock, Simon Property Group (SPG), has an 8-year streak of consecutive dividend increases. A former longer streak was interrupted by the Great recession. The company was founded in 1960 and went public in 1993.

This is a good dividend growth resume. Its best features are:

Simon often increases its dividend more than once per year. In the past 5 years, it has declared 12 increases. The increases are irregular, and it has already increased its dividend once in 2017, which was a 6.1% increase. There is no way to know whether there will be another increase this year.

Simon Property Group was founded in 1960, went public in 1993, and is headquartered in Indianapolis.

As a real estate investment trust (REIT), SPG provides an opportunity for investors to participate in the ownership of commercial real estate.

It is a global leader in the ownership of premier shopping, dining, entertainment, and mixed-use destinations.

It is an S&P 100 company, with properties across North America, Europe, and Asia that host 3 billion customers per year.

Many of its properties are considered best in class and are in large metropolitan areas. 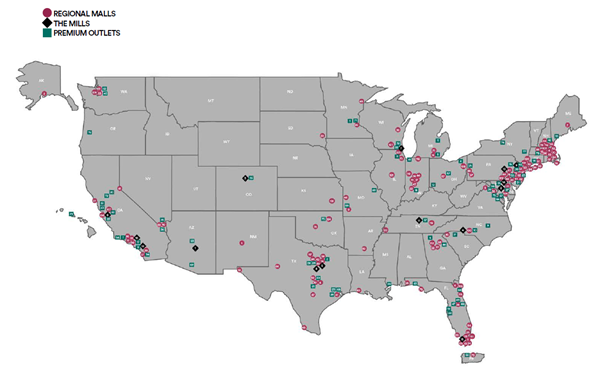 Simon develops new retail properties, enhances the performance of existing ones, and grows through acquisitions. The company is self-administered and self-managed, meaning that it does not hire outside consultants for essential operational tasks or planning. Its expertise is in-house.

Simon was named Fortune’s most-admired real estate company for 2017, the 8th time it has received that distinction.

Simon describes its merits as an investment thusly: 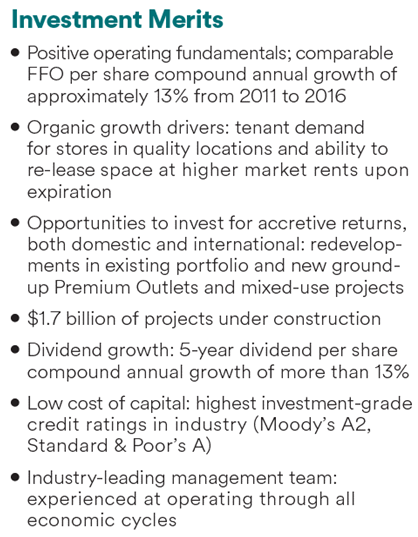 Many of SPG’s recent projects have been joint ventures with other developers. For example, Simon owns less than 100% interest in 4 major projects currently in development, with its interest ranging from 45% to 65%. As of the end of Q1, redevelopment and expansion projects, including the addition of new anchors, were underway at 25 properties in the USA, Canada, and Europe. Simon’s share of the costs of all new development and redevelopment projects under construction at quarter-end was approximately $1.7 billion.

Per its 2016 annual report, Simon’s long-term strategy is to:

As of the end of Q1, SPG’s USA regional mall and premium outlet portfolio had 96% occupancy, down slightly from 97% at the end of 2016. Simon is known for top-quality malls, and tenant sales clocked in at $615 per square foot.

No discussion of brick-and-mortar retail is complete without touching on what some see as a secular destructive force, namely the rise of Internet retailing. Physical stores still account for 90% of retail sales, but online shopping increases every year and is taking share away from physical stores. That said, it is noteworthy that as Amazon and other e-commerce enterprises have risen as retail forces, SPG has grown FFO/share and same-store NOI (net operating income). Nevertheless, e-commerce is a headwind.

Simon has been holding its own by introducing new experiences and innovations into its malls. In its 2016 annual report, Simon stated:

The mall experience will diversify away from just apparel, by increasing its mix and diversity with more mixed-use components (e.g. hotel, residential, etc.), entertainment, food & beverage and wellness. As evidence of this, we have added over 3,000 hotel and residential units to our portfolio in the last few years. The mall will become less department store focused and consumers will gravitate to the trade areas’ best assets with the most critical mass and diversity of mix, and they will become the place to shop and be entertained. We believe in the motto “live, work and play” and our locations can be the hub for those activities.

Morningstar awards SPG a Narrow moat rating. They state that the rating is based on Simon’s efficiency of scale and “network benefits produced by its high-quality, well-located, productive properties.”

The following snip from a FASTGraph shows Simon’s growth in funds from operations (FFO) over the past 10 years. FFO has increased every year except in 2009 (Great Recession). Over the past 5 years, the growth rate has been 9% per year.

Simon’s profitability and growth in FFO translate into a strong cashflow picture.

As with most REITs, Simon operates with lots of debt. By law, REITs return most of their profits to shareholders as dividends to avoid taxation at the corporate level. That means that they must access debt markets and issue new shares to obtain capital for growth and expansion. Despite the commonality and necessity of the practice, I nevertheless consider high debt to be a flag, meaning something to think about when considering REITs as investments.

SPG’s most recent quarterly results are healthy. In 1Q17, NOI was up 3.8%, FFO/share up 4.2%, and base minimum rents were up 4.4%. As we have seen, this kind of performance is not an aberration.

Simon’s price has been on the skids for almost a year. It is down 19% from a year ago and 31% from its high reached last August. 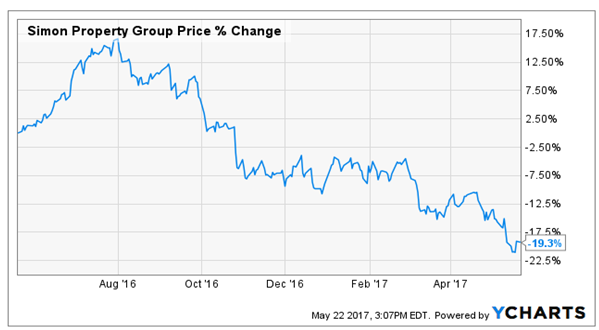 I think it’s fair to say that the skid has come from a combination of investor concerns about interest rates rising plus a perceived secular threat to malls from online shopping.

Let’s see whether the decline has brought Simon into an attractively valued territory. My 4-step process for valuing companies is described in Dividend Growth Investing Lesson 11: Valuation.

That basic estimate is based on a reference price-to-FFO (P/FFO) ratio of 15. That fair-value estimate is shown by the orange line on the following chart, while the black line shows SPG’s actual price. 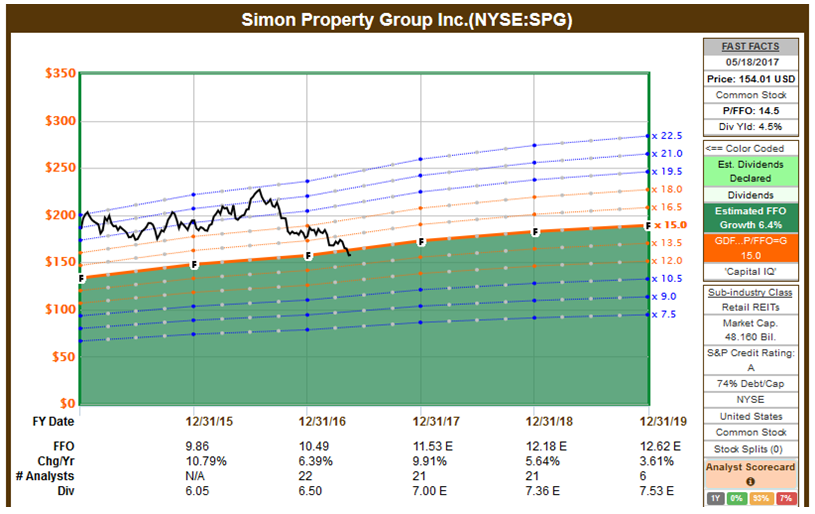 You can see that indeed, the price drop since last August has brought SPG’s price from far overvalued to fairly valued.

SPG’s current price is 97% of its fair value estimate according to this first valuation step. I calculate that by dividing SPG’s actual P/FFO ratio by the ratio of 15 that was used to draw the orange line.

I consider anything within 10% in either direction to indicate fair value, so I would call SPG fairly valued using this first step.

This method suggests a fair price of $159 compared to the stock’s current price of about $154 per share.

Step 2: FASTGraphs Normalized. The second valuation step is to compare SPG’s price to its own long-term average P/FFO ratio. This gives us a different perspective based on the stock’s own long-term market valuation instead of the market’s valuation as a whole. 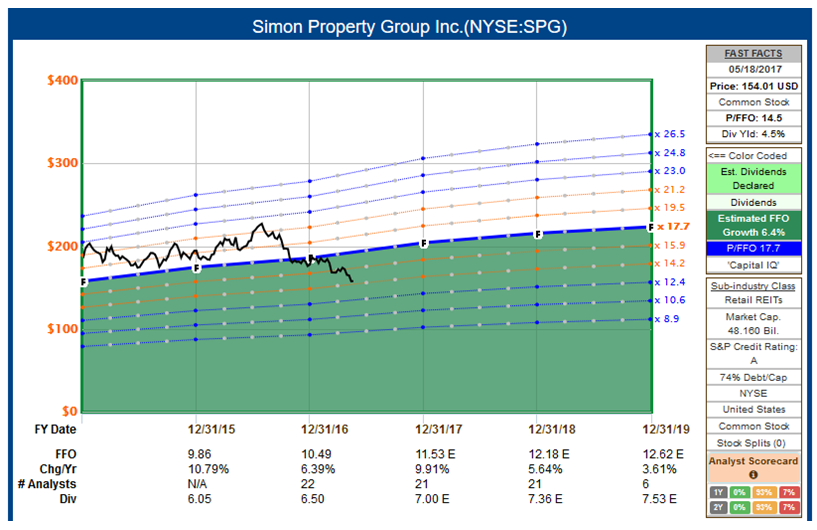 This makes SPG look undervalued. That is because its 10-year average P/FFO ratio has been 17.7 (see the dark blue box in the right panel) rather than the 15 that was used in the first step.

So using this method, Simon is 18% undervalued. This method suggests a fair price of $188.

On Morningstar’s 5-star system, SPG gets 5 stars, meaning that they think the company is significantly undervalued. They calculate a fair value of $206, which is 34% over the current price.

Last, we compare the stock’s current yield to its historical yield. This is an indirect way of calculating fair value, based on the idea that it is better for a stock’s yield to be near the top of its historical range than near the bottom.

According to Morningtar, Simon’s 5-year average yield has been 3.1%. The current yield of 4.4% is 42% over that number. However, when using this step, I cap the spread at 20%, because I think that this is the most indirect and noisiest approach to valuation.

For an outside comparison, S&P Capital IQ has a 12-month price target of $180.

Beta measures a stock’s price volatility relative to the S&P 500. I like to own stocks with low volatility, because they present fewer occasions to react, as an investor, to price volatility, especially price drops that can induce a sense of fear.

Simon’s beta of 0.6 indicates that the stock has been 60% as volatile as the market. I would normally consider this to be a good factor, but of course its recent volatility has been generally downward, which to some investors would present the exact situation they are trying to avoid. For that reason I give it a yellow grade rather than green.

Simon has had an active stock repurchase program in effect for years, and the company is currently authorized to buy back more shares. However, as a REIT, the company also issues shares to raise capital. As a result, its overall share count has remained pretty steady for the past several years.

This is a neutral factor, although it could be argued that it is a plus, because REIT share counts are usually increasing persistently. The total dividend pool, of course, is spread over the number of shares among which it must be divided.

• Good dividend resume: 4.2% yield is amply covered by cash flows and supported by strong dividend safety. The company has a history of raising the dividend annually, sometimes more than once per year.
• Good quality company with a narrow moat and one of the better credit ratings that you will find among REITs.
• Portfolio of high-end retail malls, outlet malls, and mixed-use developments.
• Solid operating history and capable management.
• Steady increases in funds from operations every year since the Great Recession. Analyts forecast a 10% increase for 2017.
• Stock is undervalued.

• High debt, although that is not uncommon for REITs, which cannot retain significant profits to fund growth (they must distribute them to shareholders).
• Possible secular shift away from physical malls and stores resulting from customer preferences shifting to online shopping and home delivery.

As always, this is not a recommendation to buy, hold, or sell Simon Property Group. Perform your own due diligence. And always be sure to match your stock picks to your financial goals.

Disclosure: I own SPG through my ownership of the Motif “ETF” portfolio that was launched on January 1, 2017. For more information about that portfolio, please click here.