The past few months, the stocks I have analyzed as Dividend Growth Stocks of the Month have been stocks that I included in the Dividend Growth Portfolio “ETF” that I launched in January at Motif Investing. You can see the full portfolio by clicking here.

These are the stocks in that portfolio that I have covered recently:

This month’s stock, Williams-Sonoma (WSM), is also in the “ETF” portfolio. WSM is a fairly recent dividend growth stock, with an 11-year streak of consecutive dividend increases. The company has been around since 1956. Based in California, it is a multi-channel retailer of high quality home products. Its brands include Williams-Sonoma and Pottery Barn.

This is a good, if not great, dividend growth resume.

Six of the 10 categories are ‘in the green,” scoring Good or Excellent ratings.

Williams-Sonoma’s yield of 3.2% is good, and its dividend increases over the past 5 years have also been good, with a CAGR of 17%. But its last two dividend increases, last year and this year, were only in the 5%-6% range. That’s a little disappointing considering the prior history.

The declining size of dividend increases is the only flag in the resume. Here are the company’s annual percentage increases going back to the beginning of its increase streak:

Williams-Sonoma was formed in 1956 and went public in 1983. It is a middle-size company. Its most prominent competitor in the specialty retailers space is Bed, Bath and Beyond (BBBY), although the space is rife with smaller specialty competitors in an industry that is fragmented.

The company describes itself as a specialty retailer of high-quality products for the home. The products represent 8 distinct merchandise/brand groups, such as

All of the brands and products are marketed through stores, direct mail catalogs, and online.

WSM operates in the United States, Canada, Australia, and the United Kingdom. It offers international shipping to customers worldwide. WSM also has unaffiliated franchisees that operate stores in the Middle East, Philippines, as well as stores and e-commerce websites in Mexico.

The brands form a continuum of appeal from childhood, though young adulthood, and into the core adult Pottery Barn and Williams-Sonoma brands.

WSM believes that its e-commerce business complements its physical-store business by building brand awareness and acting as an effective advertising vehicle.

A particular focus for WSM has been digitization and analysis of customer data.

It has been collecting information about customers for more than 25 years, ahead of most other retailers. It uses the information to formulate marketing strategies and campaigns, and to target customers with information that will be relevant to them.

With all of its retail stores, an obvious risk to Williams-Sonoma’s business model is changing customer buying habits with respect to migrating from physical stores to online. WSM appears to have positioned itself well for this threat, having developed a strong online presence of its own, in addition to benefitting from brand loyalty that it has built with customers over the years.

Just over half of WSM’s revenue comes from e-commerce. That helps the company build its brand and keep overhead low. Its online operating margins are about double those from its store operations.

Here is the guidance the company gave at its March 15 presentation with respect to its physical stores.

As you can see, WSM is neither opening new stores rapidly nor pulling back its store footprint very much (in contrast to Penney’s recent announcement about closing about 140 stores of its stores).

Throughout 2016, we have been taking aggressive approach in our retail and real estate strategies to improve the experience in our stores. We have selectively invested in remodels and refreshers to make our stores more of a destination.

We are focused on continued e-commerce innovation. We were early to understand the importance of e-commerce and we now generate almost 52% of our revenues online and we do so profitably. We know how and why our customers shop in every channel across our brands and we will continue to aggressively invest to expand our additional leadership. In 2017, we will continue to invest heavily in digital technology. In a fragmented and evolving retail environment where customers are targeted by multiple retailers, we are investing in powerful ways to increase brand level awareness and convert awareness to purchase. We’ll be implementing digital tools such as next-generation product information pages, 3D product visualization, and increased personalization to deepen online engagement of both new and loyal shoppers and to further expand loyalty across our strong and diverse portfolio brands.

Morningstar awards Williams-Sonoma a Narrow Moat rating. Morningstar believes that WSM has built a defensible position in the home furnishings industry, as evidenced by its consistent return performance, intangible brand assets, and “some of the best analytics in retail.”

Williams-Sonoma has about 5% market share in their fragmented industry, which suggests plenty of opportunities for growth.

As we will see, the absence of a credit rating is insignificant, as WSM carries very little debt.

This is a strong financial picture. The following charts from Simply Safe Dividends illustrate some of the information above.

The charts show a couple of things clearly. One is that Williams-Sonoma’s profits and growth have been strong since the Great Recession. That said, last year’s EPS growth rate slowed from previous years to just 4%.

Second, Williams-Sonoma’s business is quite sensitive to the economy. See how results dropped in the 2007-2009 era, then rebounded strongly coming out of the recession.

The average CCC (Dividend Champions, Contenders, and Challengers) company has a D/E ratio of 1.0. WSM’s debt ratio of 0.1 is almost vanishingly small in comparison. That’s a good situation.

WSM announced its 2016 results after the market closed on March 15. Compared to analysts’ expectations, the company missed its revenue number by about 2% but exceeded its earnings per share (EPS) number by a little under 3%.

The market reacted positively to the news. Note the price jump overnight between March 15 and 16.

The stock’s price is now about 3% higher than it was before the earnings announcements.

A couple weeks ago, I valued Williams-Sonoma and found it was about 21% undervalued. Now we have new numbers, plus the price rise, to work with. Let’s see if it’s still undervalued.

That basic estimate is based on a reference price-to-earnings (P/E) ratio of 15. That is the long-term average P/E of the stock market as a whole.

That fair-value estimate is shown by the orange line on the following chart, while the black line shows WSM’s actual price. 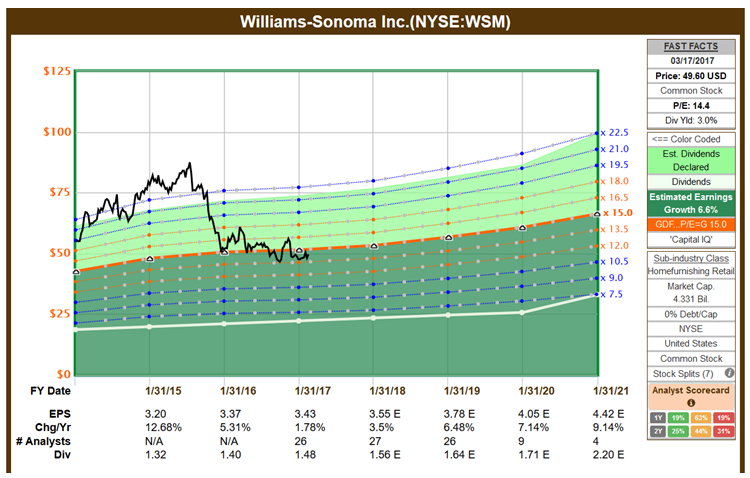 You can see that in the larger scheme of things, the price jump after the earnings announcement is just a blip. WSM is still a little undervalued under this approach.

WSM’s current price is 96% of its fair value estimate. I consider anything within 10% in either direction to indicate fair value, so I would call WSM fairly valued using this first step.

This method suggests a fair price of $52 per share, compared to the stock’s current price of about $50 per share.

Step 2: FASTGraphs Normalized. The second valuation step is to compare WSM’s price to its own long-term average P/E ratio. This gives us a different perspective based on the stock’s own long-term market valuation instead of the market’s valuation as a whole. 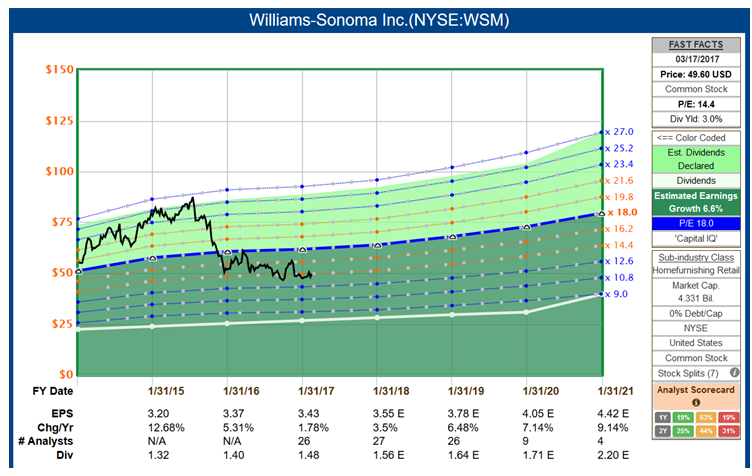 WSM’s 10-year average P/E ratio has been 18.0 (see the dark blue box in the right panel), meaning that the market has tended to value it about 20% higher than the historic valuation of all the companies at 15.0.

This method suggests a fair price of $62.

On Morningstar’s 5-star system, WSM gets 5 stars, meaning that they think the company is significantly undervalued. They calculate a fair value of $71, which is 43% over the current price.

Last, we compare the stock’s current yield to its historical yield. This is an indirect way of calculating fair value, based on the idea that it is better for a stock’s yield to be near the top of its historical range than near the bottom.

According to Morningstar, Williams-Sonoma’s 5-year average yield has been 2.2%. The current yield of 3.2% is 45% over that number. However, when using this step, I cap the spread at 20%, because I think that this method is the most indirect and noisiest approach to valuation. 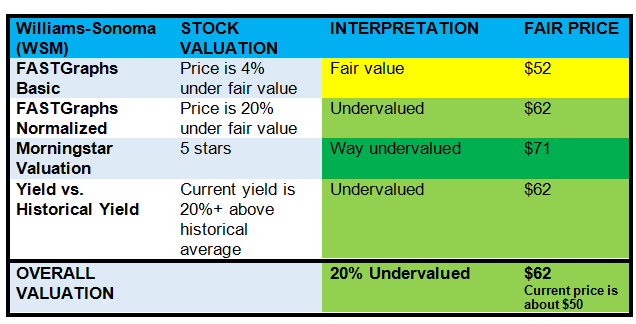 For an outside comparison, S&P Capital IQ calculates a fair value of $55, which is also the same as its 12-month price target.

So compared to my article a couple of weeks ago, Williams-Sonoma’s undervaluation has receded just a little, but it is still a good value.

Beta measures a stock’s price volatility relative to the S&P 500. I like to own stocks with low volatility, because they present fewer occasions to react, as an investor, to price volatility.

WSM’s beta of 0.9 indicates that the stock has been 90% as volatile than the market. I consider this to be an insignificant difference.

In particular, it probably mirrors expansion and contraction in the housing market as well as general consumer spending patterns, including seasonal variations.

Their most recent report shows the opinions of 28 analysts.

In other words, their average recommendation is just a little above Hold.

This again is a neutral factor.

Williams-Sonoma has had an active stock repurchase program in effect for years. The program has resulted in a steady decline in shares outstanding. The number of outstanding shares has declined about 23% over the past 10 years.

This is a positive factor, because future dividend distributions are spread out over fewer shares. A company can hold the dollar size of its dividend pool constant, yet increase the dividend each year if the share count keeps declining.

• Good dividend resume: Good yield is supported by strong dividend safety. The company has declared an intent to distribute dividends as a percentage of operating income.
• Good quality company with a narrow moat. Advanced in its use of data analysis to understand customers and market to them.
• Growth opportunities are plentiful, but that also means many competitors in a fragmented industry.
• Strong financials, suggesting a company with a solid conservative approach to financing. Very low debt level.
• Steady decline for years in number of shares outstanding.
• Stock is undervalued.

• Declining rate of dividend growth in the past couple of years.
• Slowing rate of profit growth in 2016 and projected over the next few years.
• Strategic challenges in navigating consumer shifts to online buying, although company seems well positioned in this area, with more than 50% of its sales already coming online.

As always, this is not a recommendation to buy, hold, or sell Williams-Sonoma. Perform your own due diligence. And always be sure to match your stock picks to your financial goals.

Disclosure: I own WSM through my ownership of the Motif “ETF” portfolio that was launched on January 1, 2017. For more information about that portfolio, please click here.