AbbVie resulted from the separation of the former Abbott Laboratories into 2 companies in 2013.

One company retained the Abbott name and still sells under the old ticker symbol (ABT). The second company became a new company, named AbbVie, which trades under the symbol ABBV. In a nutshell, AbbVie took the pharmaceutical business, while everything else stayed with Abbott.

I included ABBV in the Dividend Growth Portfolio “ETF” that I created in January at Motif Investing. You can see the full portfolio by clicking here.

There are 29 stocks in that portfolio. I have previously covered 13 of them as Dividend Growth Stocks of the Month. Here is a guide to the previous articles.

Let’s take a closer look at AbbVie and see why it was a good choice for the “ETF” portfolio.
I also have a second reason for taking a close look: I will be reinvesting dividends in my own Dividend Growth Portfolio later this month, and AbbVie is one of the candidates to start a new position there. So are Amgen, VF, and Qualcomm, which were each selected as Dividend Growth Stocks of the Month since last July.

This is a good dividend growth resume.

Six of the 10 categories are ‘in the green,” scoring Good or Excellent ratings. The dividend appears quite safe, judging from the safety ratings from Simply Safe Dividends and Safety Net Pro. (For more on dividend safety, see Dividend Growth Investing Lesson 17.)

AbbVie’s yield of 4.2% is excellent, and its dividend increases since the company’s creation have been very strong. The company kicked up the dividend by another 12% in January.

AbbVie’s dividend increase streak is only 5 years, but that has an asterisk: Its former parent (Abbott) had been a Dividend Champion, with an increase streak exceeding 25 years. AbbVie has the same dividend DNA. So the short 5-year streak, which would normally be an orange flag, is OK in my opinion.

I always like it when a company specifically addresses its dividend record. This is from AbbVie’s presentation in January at the J.P. Morgan Healthcare Conference: 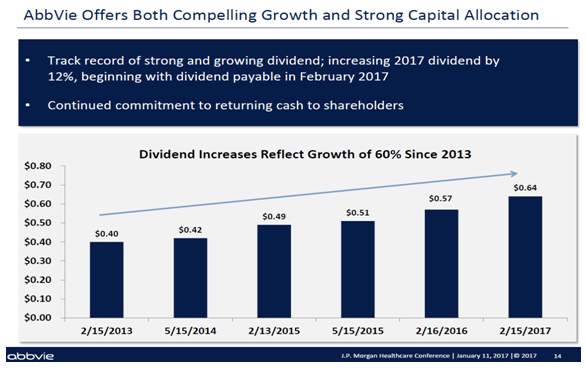 AbbVie was spun out of the old Abbott Labs in 2013 as a freestanding biopharmaceutical company. The company has 28,000 employees around the world, including scientists, researchers, manufacturing specialists, regulatory experts, and salespeople.

AbbVie touts its research and innovation abilities. The company focuses on discovering, developing, and delivering drugs in therapeutic areas where it has proven expertise. These areas are:

The first two areas are most important. AbbVie has one blockbuster immunology drug, Humira, that brings in more than half the company’s revenue and around 70% of its profit. Humira is a TNF inhibitor approved for treatment of rheumatoid arthritis, chronic plaque psoriasis, Crohn’s disease, and several other conditions. (Anti-TNF drugs treat inflammatory conditions.)

Morningstar awards AbbVie a Narrow Moat rating, based on its patent-protected drugs, intellectual intangibles, and a powerful salesforce. The reliance on one drug (Humira) for most of its profits prevents a Wide Moat rating.

The main US patent on Humira expired in 2016, and the main European patent will expire in 2017. That said, the sources that I consulted believe that Humira will remain a big player in the market for several more years, perhaps as far out as 10 years. The company itself has indicated it believes that many other patents it owns around Humira (covering such areas as formulation, manufacturing, and method of treatment) will be able to protect it against biosimilar challenges at least through 2022.

AbbVie has many other drugs in their development pipeline. Here is how they see their two main business areas: 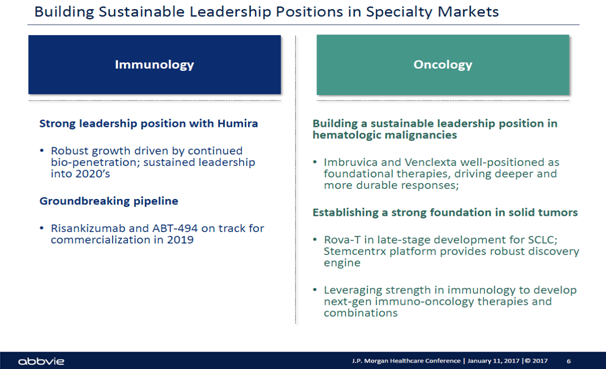 I am not expert enough to characterize ABBV’s drug development pipeline as strong or weak. However, several analyst reports that I consulted believe that the pipeline is strong. Here are examples:

• S&P Capital IQ: “[W]e believe ABBV has a robust pipeline to drive future growth. We also see continued robust Humira sales as we think it will be several years before Amgen’s biosimilar Amjevita reaches the market amid their patent lawsuit.”

• Morningstar: “Despite the likely biosimilar headwinds facing Humira over the next few years, we believe the combination of the well-positioned currently marketed drugs along with a strong pipeline secures a narrow moat rating for the firm.”

AbbVie’s ROE is very high at 118%. That has been steadily high, juiced by leverage since the spinoff in 2013.

The company has been a cashflow machine since its formation, based largely on Humira’s success.

The obvious chink in the financial armor is the high debt load. The average CCC (Dividend Champions, Contenders, and Challengers) company has a D/E ratio of 1.1. AbbVie’s is 5 times higher. Some companies can make such a capital structure work, but the whole picture obviously would be better with a more modest debt load.

In most cases, as is the case with AbbVie, that basic estimate is based on a reference price-to-earnings (P/E) ratio of 15. That is the long-term average P/E of the stock market as a whole.

That fair-value estimate is shown by the orange line on the following chart, while the black line shows AbbVie’s actual price. 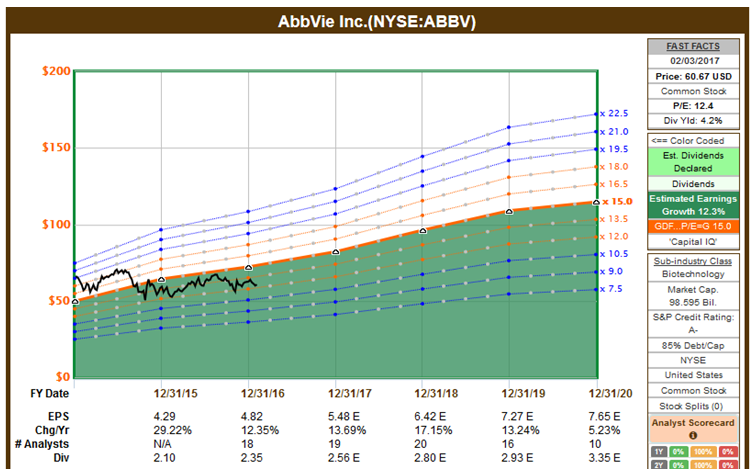 Using this approach, AbbVie is undervalued. Its current price is 83% of its fair value estimate. I consider anything within 10% in either direction to indicate fair value, so 17% undervaluation is well outside that range. In other words, AbbVie is selling at an attractive price.

This method suggests a fair price of $73 per share, compared to the stock’s current price of about $61 per share.

Step 2: FASTGraphs Normalized. The second valuation step is to compare ABBV’s price to its own long-term average P/E ratio. This gives us a different perspective based on the stock’s own long-term market valuation instead of the market’s valuation as a whole. 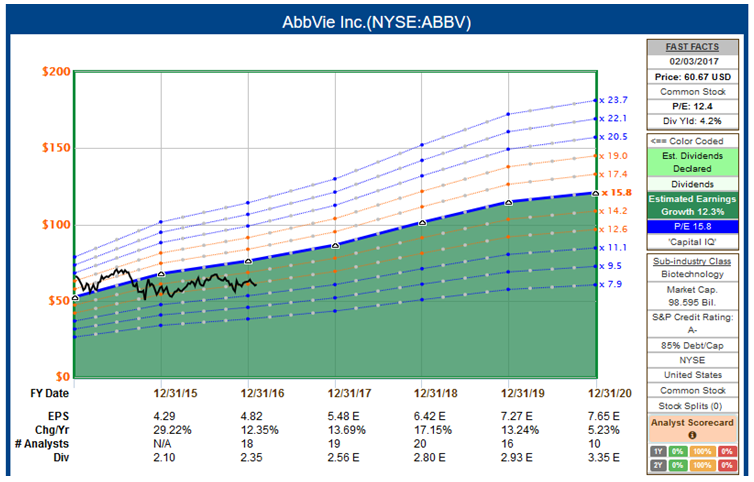 AbbVie’s 10-year average P/E ratio has been 15.8 instead of 15, meaning that the market has tended to value it a little higher than the historic valuation of all the companies.

So the stock is 22% undervalued using this second method. I consider anything beyond 20% to be serious undervaluation.

This method suggests a fair price of $78.

On Morningstar’s 5-star system, ABBV gets 4 stars, meaning that they too think AbbVie is undervalued. They calculate a fair value of $73, which is about 17% over the current price.

Last, we compare the stock’s current yield to its historical yield. This is an indirect way of calculating fair value. It is better for a stock’s yield to be near the top of its historical range than near the bottom. 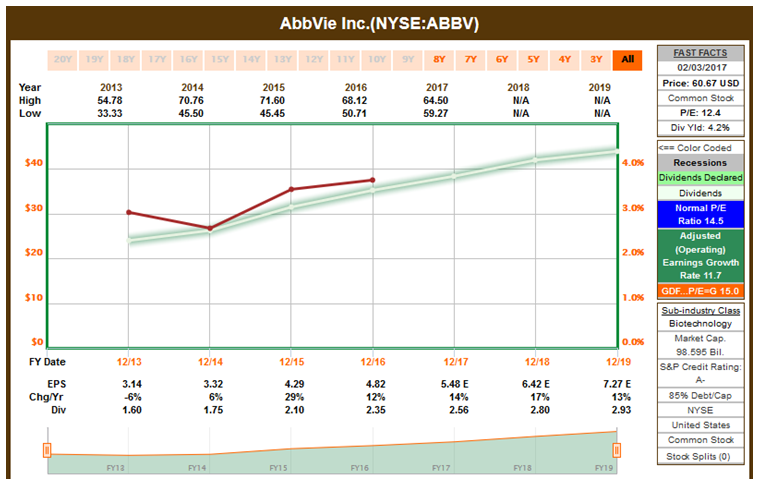 AbbVie’s current yield is 24% above that average. I cut off variances at 20% when I use this method.

The 4 valuation methods are very consistent in suggesting that AbbVie is undervalued.

For an outside comparison, S&P Capital IQ calculates a fair value of $81, with a 12-month price target of $84.

Beta measures a stock’s price volatility relative to the S&P 500. I like to own stocks with low volatility, because they present fewer occasions to freak out over price drops.

AbbVie’s beta of 1.6 indicates that the stock has been 60% more volatile than the market. I consider this a negative factor.

Finally, this chart shows AbbVie’s share count. The relevant data is that since 2013. The share count has been steady. That’s OK, but a dropping share count would be better, because it would mean that the dividend and future increases are spread over fewer shares.

• Good dividend resume: Excellent yield at 4.2%; double-digit dividend growth rates; and strong dividend safety. The short streak of annual increases is simply because the company has only existed long enough to have a streak of 5 years.
• Good quality company with a narrow moat.
• Dominant blockbuster drug in its field (Humira).
• Drug pipeline that is considered to be strong by many experts.
• Many good financial aspects, including high return on equity (although that is juiced by debt), strong earnings and cash flows, and projected earnings growth that is expected to accelerate over the next few years.
• Stock is significantly undervalued.

• Strong reliance on a single product (Humira) that accounts for >50% of revenue and >70% of profits.
• Debt load is very high.
• Stock price has been much more volatile than the market.

I suspect that both AbbVie’s undervaluation and its high beta are explained by the same factors: The company’s reliance on a single product for its current financial success combined with its promising but unproven pipeline of new drugs.

Both factors probably have created a fair amount of uncertainty about the company’s true prospects. Uncertainty often leads to low valuations and a jittery stock price.

As always, this is not a recommendation to buy, hold, or sell AbbVie. Perform your own due diligence. And always be sure to match your stock picks to your financial goals.

Disclosure: I own AbbVie through my ownership of the Motif “ETF” portfolio that was launched on January 1, 2017. For more information about that portfolio, please click here.