Cardinal Health (CAH) is a stock that I recently placed into my Dividend Growth “ETF” at Motif Investing.

Of the 29 stocks in that portfolio, I have previously covered 12 as Dividend Growth Stocks of the Month. Here is where you can find them.

Of course, some of those articles are fairly old. On the other hand, the fact that a stock featured in 2015 can make it into a new dividend growth portfolio launched in 2017 indicates how steady and dependable some of these companies are.

[ad#Google Adsense 336×280-IA]That’s what you want in a dividend growth portfolio: Companies that are reliable and have durable businesses.

A few of the other companies I have written about, such as PepsiCo (PEP) and Microsoft (MSFT), would also have made it into the new portfolio but for high valuations at the moment.

This month, we move on to an Ohio-based health care distributor.

Cardinal Health’s (CAH) operating results over the past few years have outrun its stock price.

That makes it an interesting prospect. Let’s take a closer look.

Except for the middling yield of 2.5%, this is about as good a dividend resume as you see.

Nine of the 10 categories score Good or Excellent, including all payout ratios, all dividend increase percentages, and both dividend safety ratings from Simply Safe Dividends and Safety Net Pro. (For more on dividend safety, see Dividend Growth Investing Lesson 17.)

Cardinal’s yield of 2.5% is below my personal minimum of 2.8%, but such a yield can be mixed in with higher-yielding stocks in a portfolio that has a long time-frame. The counterpoint to CAH’s yield is that its dividend is growing so fast.

CAH has a 5-year dividend growth rate (DGR) of 15% per year, so its dividend is compounding quickly. Its next increase is expected to be announced in June for payment in July, 2017.

You can see how Cardinal’s rate of dividend increases accelerated after 2004.

Cardinal delivers medical products, pharmaceuticals, and solutions that enhance supply chain efficiency from hospital to home. It is one of three main players in its industry, the others being McKesson (MCK) and AmerisourceBergen (ABC). 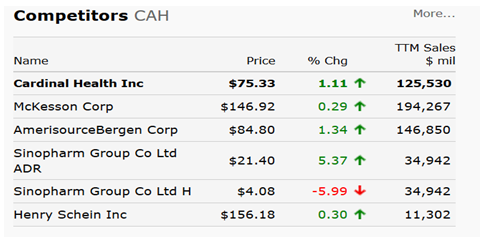 About 200 US hospitals outsource the management of their inpatient pharmacies to Cardinal.

Cardinal has several large system contracts, including with CVS Health (CVS) – another member of the Motif portfolio – several large provider GPOs, and mass retailers. The company recently lost its primary supplier contracts with Express Scripts and Walgreens. The pharmaceutical distribution business is competitive, especially as to the largest customers.

Cardinal’s Medical segment (12% of revenues) distributes medical-surgical products to ambulatory care centers, physician offices, clinical laboratories and hospitals across the US and Canada. This unit also produces gloves, gowns, surgical drapes, scrubs, and fluid management products. Cardinal also assembles surgical and procedural kits that contain all necessary products and apparel for specific procedures into one kit, allowing clinicians to focus on the patient.

Morningstar awards Cardinal a Wide Moat rating, based mostly on the sheer size, reach, and logistical efficiencies of their distribution system. Morningstar estimates that Cardinal along with its 2 major competitors have a combined market share over 90%.

In 2014, Cardinal and CVS Health created a generic sourcing and supply chain joint venture, Red Oak Sourcing, LLC. Both companies have committed to sourcing generic drugs through Red Oak. The strategy is that the combined partnership will be able to wring pricing discounts from generic drug manufacturers.

Cardinal’s ROE is good at 22%, and that has been mostly steady, with an overall rising trend, for the past decade, as shown here.

Both earnings and cashflow are important, so let’s take a moment to explain the difference.

Officially reported earnings are calculated according to the myriad rules of Generally Accepted Accounting Principles (GAAP). There are a couple of important points to remember about GAAP.

• GAAP occasionally counts as “money” things that are not cash. A simple example is goodwill. If an acquiring company pays more than book value for an acquired company, the difference is called goodwill. That is a way of expressing the value of brands, expertise, and other intangibles. GAAP requires that extra amount be accounted for.

• GAAP requires accountants to shift the timing of cash flows. Cash inflows and outflows are not recognized at the time of actual receipt and disbursement, but rather when the events associated with the cash actually take place. An example would be a subscription business that takes in cash when subscriptions are paid for, but counts them as revenue only as content is sent to the subscriber. On the expenditure side, a company may pay for equipment with cash, but the accountants depreciate the equipment over the time during which it is productive.

Here are Cardinal’s earnings per share over the past decade.

While the earnings are all positive, Cardinal’s earnings per share (EPS) growth has been inconsistent over the past decade, instead of rising consistently. There are as many years of decline as of growth. That is a minor warning flag.

Now let’s consider cash. Cash for a company is like gasoline for a car. It keeps it running. Cash is used to pay salaries, bills, and dividends. There has to be enough cash available on a real-time basis to keep the company operating.

As investors, we want companies that are not only profitable under GAAP but also have strong cash flow. That’s why we look at both.

Free cash flow is the cash left over after the company pays all its expenses. Cardinal’s free cash flow has been strong, again with some inconsistencies year-to-year, but showing an overall trend upwards.

Finally, debt. Cardinal’s D/E ratio, 0.9, is a touch better than we usually see these days. The average CCC (Dividend Champions, Contenders, and Challengers) company carries a D/E ratio of 1.1%.

Step 1: FASTGraphs Default. The first step is to compare the stock’s current price to FASTGraphs’ basic (default) estimate of its fair value.

In most cases, and with Cardinal, that basic estimate is based on a reference price-to-earnings (P/E) ratio of 15. That is the long-term average P/E of the stock market as a whole.

That fair-value estimate is shown by the orange line on the following chart, while the black line shows Cardinal’s actual price. 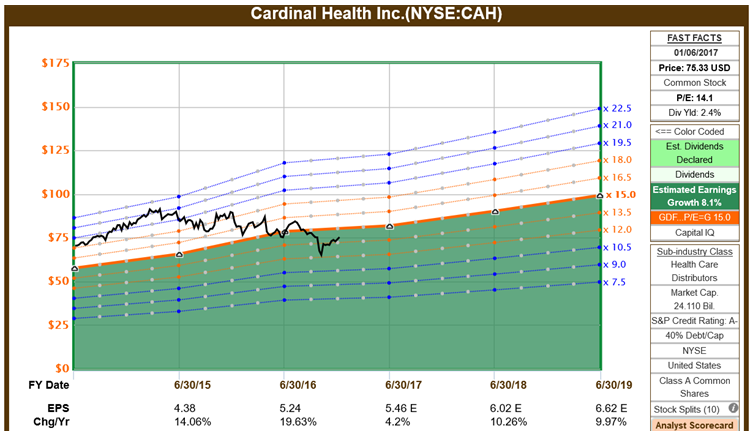 Using this approach, Cardinal Health is fairly valued. Its current price is 6% under the fair value estimate. I consider anything within 10% in either direction to indicate fair value.

This method suggests a fair price of $80 per share, compared to the stock’s current price of about $75 per share.

Step 2: FASTGraphs Normalized. The second valuation step is to compare CAH’s price to its own long-term average P/E ratio. This adjusts for the fact that some stocks always seem to be highly valued by the market, while others always seem to have have a low valuation. 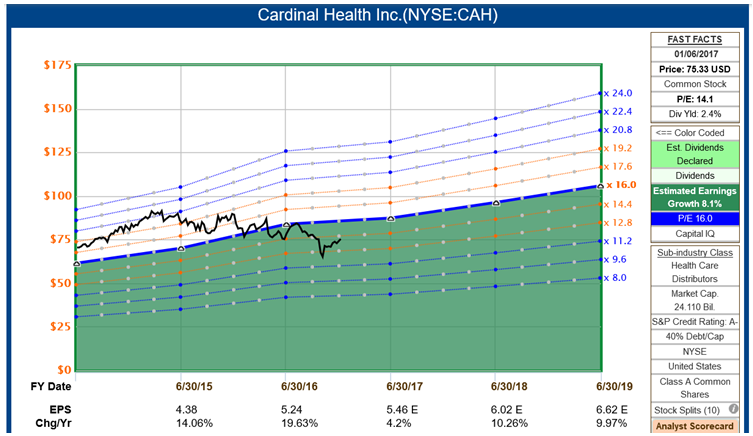 Cardinal’s 10-year average P/E ratio has been 16 instead of 15, meaning that the market has tended to value CAH a little higher than its historic valuation of all the companies.

That means that under this method, Cardinal is undervalued, because its current P/E of 14.1 is 12% less than its historical P/E of 16. That undervaluation suggests that Cardinal’s fair price is $86.

Step 3: Morningstar Star Rating. Morningstar uses a discounted cash flow (DCF) process for valuation. Their approach is comprehensive and detailed. Many investors consider DCF to be the best method of assessing fair valuations.

On Morningstar’s 5-star system, CAH gets 3 stars. That means that they believe the company is fairly valued. They calculate a fair value of $79, which is about 5% over the current price.

Last, we compare the stock’s current yield to its historical yield. This is an indirect way of calculating fair value. It is better for a stock’s yield to be near the top of its historical range than near the bottom.

Per Morningtar, Cardinal’s 5-year average yield is 2.0%. Its current yield is 2.5%, suggesting that the stock is 25% undervalued. When I use this method, I cut off estimates of undervaluation at 20%.

At 20% undervaluation, that suggests a fair price of $94.

Using the 4 approaches just described, our valuation summary for Cardinal Health looks like this:

For an outside comparison, S&P Capital IQ has a fair value of $90 for Cardinal Health.

Beta measures a stock’s price volatility relative to the S&P 500. I like to own stocks with low volatility, because they present fewer occasions to freak out over price drops.

Cardinal’s beta of 0.7 indicates that the stock has been 30% less volatile than the market. I consider this a positive feature.

Finally, this chart shows Cardinal’s share count over the past 10 years. 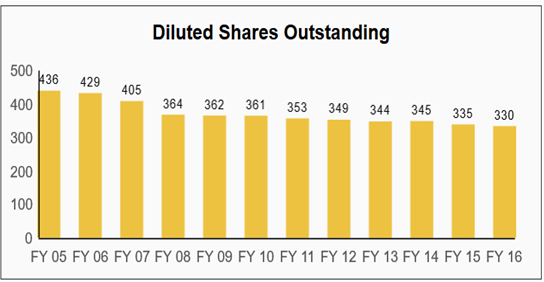 We see a slow but steady share decline from 2005 to 2016. I consider this a positive factor. For one thing, it means that the dividend pool is spread over fewer shares each year, making it easier for the company to increase its dividend per share.

There are no strong negatives. The only flag I found is the company’s inconsistent rate of earnings growth, but earnings have been positive for 10+ years.

As always, this is not a recommendation to buy Cardinal Health. Perform your own due diligence. And always be sure to match your stock picks to your financial goals.

Disclosure: I own Cardinal Health through my ownership of the Motif “ETF” portfolio that was launched on January 1, 2017.