The once downtrodden DOW is now dominating with a 15% return in the last 52 weeks. Sentiment has certainly shifted on a 25% plus pop since the February lows.

The 20K DOW day does not seem very far away…

The DOW may be the world’s most recognized stock measure, but it only covers 30 stocks. Three Blue Chips are still in the red for 2016 with just over two weeks left until the New Year. 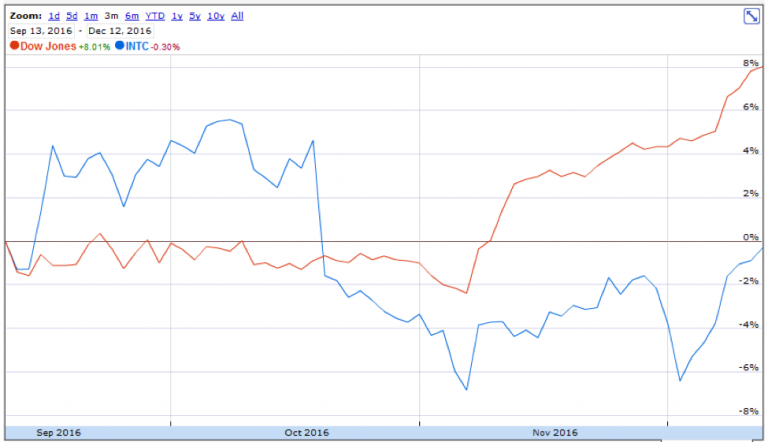 One DOW dog has been Intel, which is actually negative over the last three months. Compare that to the 8% 90-day performance in the DOW, and the reward to risk is bullish for INTC at these levels.

INTC has trade tracking mostly from $34 to $36 since July. A breakout of this trading range targets $38 and new annual highs.

The larger technical objective is $42 as the measured move target of the “V” recovery from the $38 October top to $34 low. A 15% potential pop is an opportunity to use the power of options for a capital preserving stock substitution strategy.

The June option has six months for Bullish development.

An In-The-Money option gives you the right to be long from a lower strike price and it costs much less than the stock share itself.

An INTC long call option can provide the staying power in a potentially larger trend extension. More importantly, the maximum risk is the premium paid.

[ad#Google Adsense 336×280-IA]One major advantage of using long options instead of buying or selling shares is putting up much less money to control 100 shares, that’s the power of leverage.

Choosing an option can sometimes be a daunting task with all of the choices and expiration months.

Simply put, traders want to buy a high probability option that has enough time to be right.

The option strike price is the level at which you have the right to buy without any obligation to do so. In reality, you rarely convert the option into shares. Simply sell the option you bought to exit the trade for a gain or loss.

There are two rules options traders need to follow to be successful.

Rule One: Choose an option with 70%-plus probability. The Delta is a measurement of how well the option reacts to movement in the underlying security. It is also important to buy options that payoff from only a modest price move.

There is no need to ONLY make money on the all but infrequent long shot price explosions.

Any trade has a fifty/fifty chance of success. Buying In The Money options increases that probability. That Delta also approximates the odds that the option will be In The Money at expiration.

Buying better options are more expensive, but they are worth it. The chances of success are mathematically superior to buying cheap, long shot, Out Of The Money lottery tickets that rarely ever pay off.

With INTC trading at $36.00, for example, an In The Money $32.00 strike option currently has $4.00 in real or intrinsic value. The remainder of any premium is the time value of the option.

Rule Two: Buy more time until expiration than you may need — at least three to six months for the trade to develop. Time is an investor’s greatest asset when you have completely limited the exposure risks.

Traders often buy too little time for the trade to develop. Nothing is more frustrating than being right, but only after the option has expired premature to the market move.

A close in the stock below $33 on a weekly basis or a loss of half of the option premium would trigger an exit. Notice the $32 strike has the right to be long from a discounted level last seen in July.

An option play also has staying power with the ability to ride through Ups and Downs that would force most stock traders out of the position.

The option also behaves much like the underlying stock with much less money tied up in the investment. The Delta of this $32 strike is 79%. That also approximates the probability that the option will be in the money at expiration.

The June option has nearly six months for bullish development with the $32 strike the right to buy at the July low.

The maximum loss is limited to the $550 or less paid per option contract with an exit stop loss at half the option premium to reduce dollar exposure. The upside, on the other hand, is unlimited. 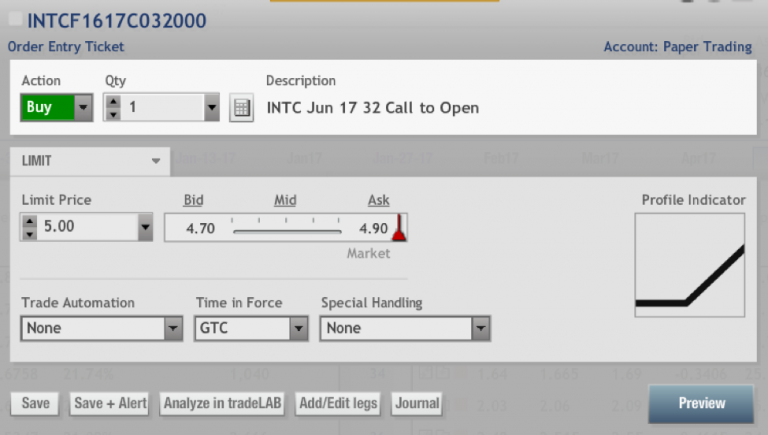 The INTC option trade break even is $37.50 at expiration ($32 strike plus $5.50 or less option premium). That is one dollar above the current INTC stock price.