The company was founded in 1955 and is headquartered in Columbus, GA.

Aflac’s trademark, the Duck, is one of the most ubiquitous advertising symbols around.

You probably see him and his antics several times a week. I know that I do.

What you may not know is that Aflac is a Dividend Champion with 33 straight years of increased dividends. Its most recent increase was last November, when it raised its dividend by 5.1%.

How well is the Duck’s stock valued? Let’s go through our valuation steps and see how it stacks up. (For a complete discussion of valuation and what it means, please read Dividend Growth Investing Lesson 11: Valuation.)

In the the first step, we compare the stock’s current price to FASTGraphs’ standard estimate of its fair value.

FASTGraphs’ estimate is based on the long-term price-to-earnings (P/E) ratio of the whole stock market, which is 15.

That fair value is shown by the orange line on the following graph, while the black line is Aflac’s actual price. The orange line is calculated by multiplying Aflac’s earnings by 15. 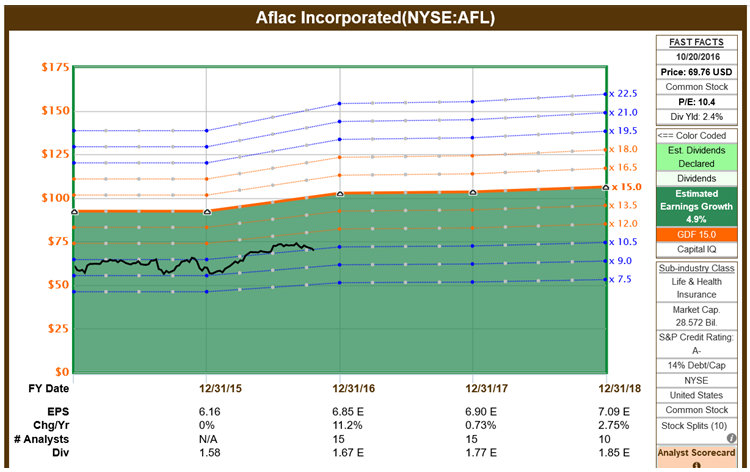 You can see that Aflac’s price is far under its earnings x 15.

By this measure, Aflac is significantly undervalued. The ratio of its actual P/E ratio (10.4) to the 15 used to draw the orange line is 0.69. In other words, Aflac’s price is 31% below its fair price.

Its fair price would be its current price divided by the ratio 0.69, or $101. I round the fair price off to the nearest dollar to avoid creating a sense of false precision.

Note the clear pattern on this annual list of Aflac’s average P/E ratios: 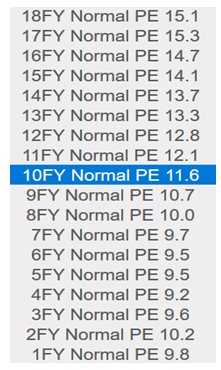 The market has been steadily reducing Aflac’s average valuation for years. Note how it drops from 15.1 over the past 18 years, to 11.6 over the last 10, to 9.8 over the past year.

I normally use the 10-year average valuation for this step (highlighted in blue). The blue line on the following graph shows Aflac’s valuation when we use the highlighted value as our reference point for fair value. 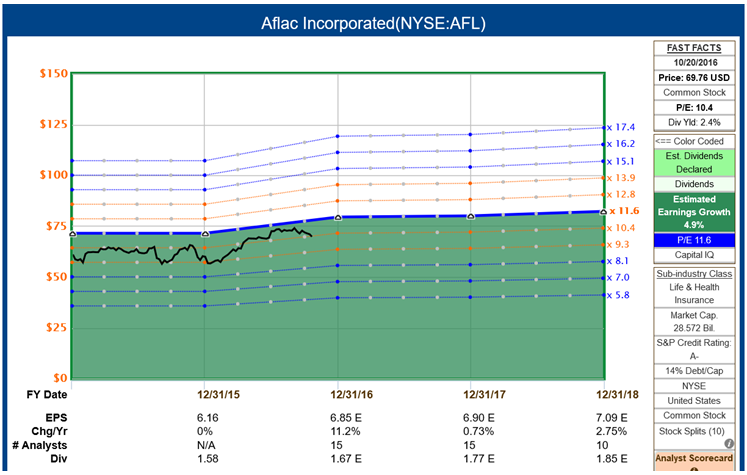 Its fair price under this scenario is $78.

Morningstar’s discounted cash flow (DCF) approach to valuation is different from the first two approaches based on P/E ratios. Morningstar discounts all of the stock’s estimated future cash flows back to the present to arrive at a fair value estimate.
When this technique is done right, many investors consider it to be the finest way to value a stock.

Unfortunately, Aflac is not rated by Morningstar. They assign no stars and do not compute a fair value for this company.

That happens occasionally. Morningstar’s analysts cover around 2000 stocks, but AFL is not one of them.

This is how Aflac’s current yield compares to its 5-year average (data from Morningstar):

So by this method, Aflac is fairly valued, and its fair price computes to $67.

Using the 4 approaches just described, our valuation estimate for Aflac comes out like this. 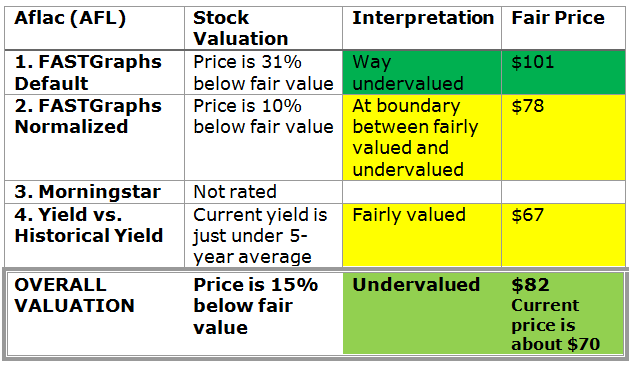 Thus by my reckoning, Aflac is 15% undervalued, trading at about $70 compared to a fair price of $82.

For another reference point, I looked at S&P Capital IQ’s analysis. They do not report a current fair price for Aflac, but they have a 12-month price target of $77 on the shares. That is 10% more than the shares are trading for now.

If past is prologue, Aflac should announce its 2016 dividend increase in a couple of weeks. Disclosure: I own Aflac.

As always, this is not a recommendation to buy Aflac. Always perform your own due diligence. Check the company’s quality, financial position, and business prospects. Also consider how well it fits your portfolio in terms of diversification and your long-term investing goals.