Over a year ago, I covered Apple (AAPL) as a Dividend Growth Stock of the Month. One of the article’s premises was that we could begin to think about Apple as an ongoing, slower-growing business rather than as a company that has to keep inventing world-changing devices every 9 months.

The basic story about the company has not changed much since then, in my opinion.

[ad#Google Adsense 336×280-IA]But I think it is time to revisit the stock’s valuation and see whether it is still selling at a fair price.

At the time of the original article, Apple was selling for about $129 per share, and I considered it to be fairly valued.

Simply Safe Dividends gives Apple a score of 95 for dividend safety, meaning that its dividend is considered to be very safe.

Simply Safe Dividends’ scores range from 0-100 and fall along the following scale:

As you might expect, since Apple’s price is lower and its dividend yield is higher than a year ago, its valuation is probably still at least fair, if not even better.

But a conservative investor leaves nothing to chance, so let’s go through the valuation steps and see for sure.

For a complete review of how I determine valuation, please consult Dividend Growth Investing Lesson 11: Valuation.

In the the first step, we compare the stock’s current price to FASTGraphs’ basic estimate of its fair value.

FASTGraphs’ default estimate of fair value is based on the long-term price-to-earnings (P/E) ratio of the whole stock market, which is 15.

That fair value level is shown by the orange line on the following graph, while the black line is Apple’s actual price. 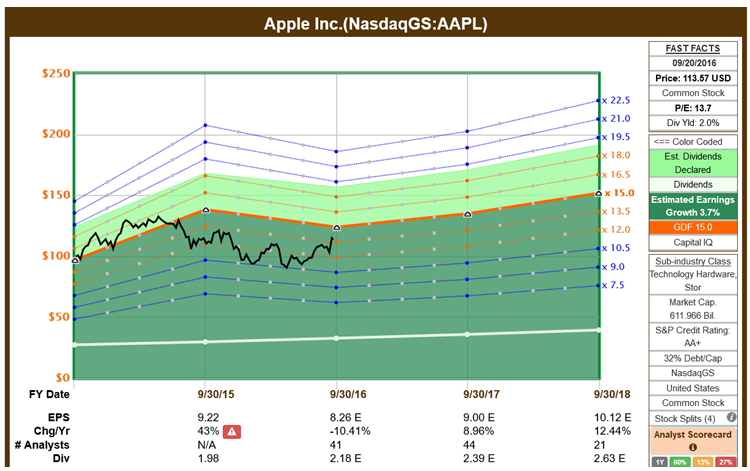 You can see that AAPL is trading somewhat below the orange fair-value line.

We can calculate how much the discount to fair value is.

Simply divide AAPL’s actual P/E ratio of 13.7 (shown in the upper-right corner) by the ratio of 15.0 used to compute the orange line.

That would suggest that its fair price is about $125 compared to its actual recent price of about $114. 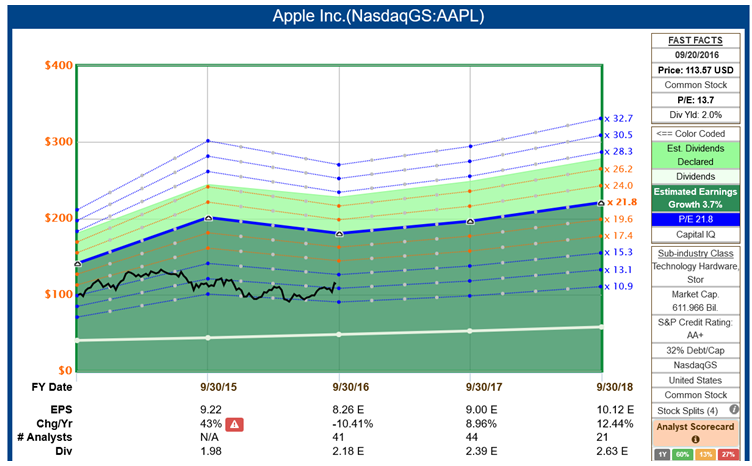 I use a 10-year look-back period to compute Apple’s historical P/E ratio. As shown in the dark blue box, it is 21.8, which is traced on the graph by the dark blue line.

[ad#Google Adsense 336×280-IA]That represents fair value based on AAPL’s own historical treatment by the stock market.

In other words, this suggests that AAPL is trading at just 64% of its fair value.

Its fair price under this scenario is $177.

To be conservative, I am going to modify this in the following fashion.

The 10-year look-back period takes us back into Apple’s heyday as a stock market growth darling. You can see here how AAPL’s P/E ratio has been generally falling over the past 18 years: 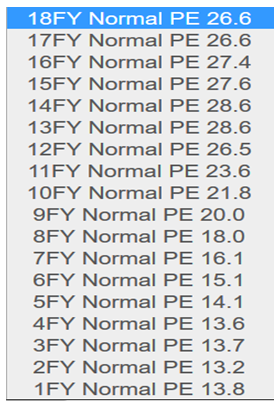 So I am going to make a seat-of-the-pants adjustment to be conservative. I will consider Apple to be half as undervalued as the calculation above. That would put its undervaluation at 18% and its fair price at $139.

Morningstar uses a discounted cash flow (DCF) approach to valuation that is different from the approaches based on P/E ratios. Morningstar discounts all of the stock’s future cash flows back to the present to arrive at a fair value estimate.
When this technique is done right, many investors consider it to be the finest way to value a stock.

On Morningstar’s 5-star grading scale, 3 stars means that Morningstar believes that AAPL is fairly valued. They have computed a fair value price of $133.

While that is 16% above Apple’s current price, they still place the stock in a broad range of fair valuation.

Per FASTGraphs, this is how Apple’s yield has looked since they began paying a dividend:

From the display, we can see that Apple has not yet established a 5-year dividend growth history. But if we average the year-end yields, we get 1.7%. Apple is currently yielding 2.0%, or 18% above its 4-year average yield.

Again to be conservative, I am going to knock that back by half, or 9%. That suggests that Apple is 9% undervalued, with a fair price of $125.

Using the 4 approaches just described, our valuation for Apple comes out like this.

Thus by my reckoning, Apple is undervalued at the current time.

Even though 3 of the 4 individual methods fall within a broad “fair value” range, each of them calculates to a fair value price that is higher than Apple’s current price. When everything is combined, Apple comes off as 12% undervalued, with a fair value price of $130.

Valuations are long-term in nature. You may be wondering why Apple’s price is lower today than a year ago, if the original conclusion that Apple was fairly valued then was correct.

The answer is simple: Stocks can stay undervalued (or overvalued) for a long time. It is certainly possible that the original conclusion was wrong, or simply that the market price has not caught up to fair valuation yet.

Apple stock is traded a lot, and its price tends to be more variable than the market itself. Investors and traders get emotional about Apple. What we have tried to do last year and again today is to strip emotion out of the equation and rationally determine what a fair value for Apple is.

As always, this is not a recommendation to buy Apple. Always perform your own due diligence. Check out the company’s quality, financial position, and business prospects. Also consider whether it fits (or does not fit) into your portfolio in terms of diversification and your long-term investing goals.