I began this Dividend Growth Stock of the Month series at the beginning of last year. Here are the stocks covered so far this year:

The very first stock in the series, back in January 2015, was the communications giant AT&T (T). This month, we will take a look at its largest competitor: Verizon Communications (VZ). This is a stock that I am seriously considering for my wife’s and my retirement portfolio as well as for my public Dividend Growth Portfolio.

Overall this is a good resume. Highlights include:

The following chart shows Verizon’s 10-year price and dividend history. It illustrates how much noise there is in the stock’s price compared to its dividend payouts. 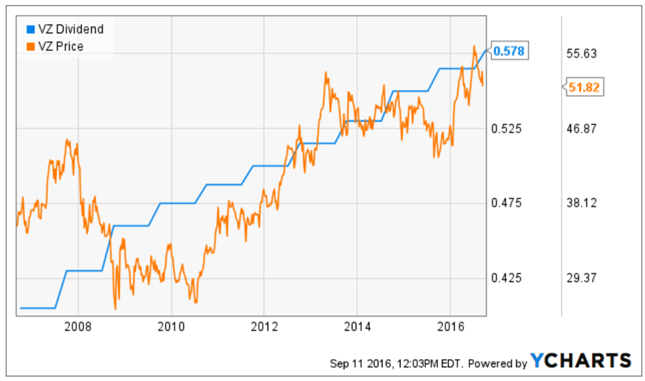 This chart shows VZ’s share count over the past 10 years. 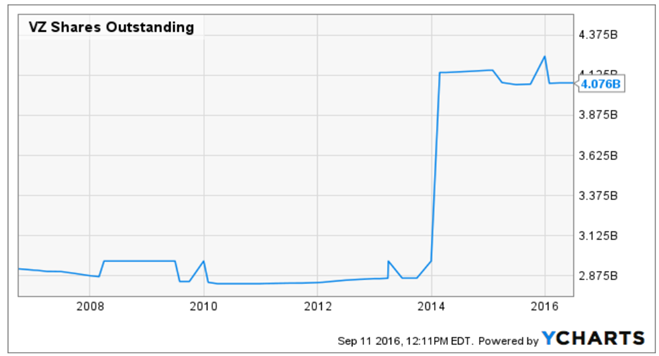 The graph does not show the declining share count that we normally prefer. However, I don’t see the issuance of shares in 2014 as a particular concern. They issued the shares to raise money for an important acquisition. The issuance came after several years when VZ’s price climbed significantly. That suggests that they got relatively good value for the new shares.

Business Model and Quality
Verizon provides wireline and wireless telephone and broadband data services to more than 112 million retail connections nationwide. It is the largest wireless provider in the country.

[ad#Google Adsense 336×280-IA]Verizon and AT&T together hold a dominant share (around 60%) of the wireless market.

But it is not a duopoly.

The wireless market has strong competition.

Besides the two leaders, companies such as Sprint, T-Mobile, and U.S. Cellular provide vigorous competition.

The US market is highly penetrated.

While FiOS is a successful product, the wireline-Internet market is slowly shrinking due to competition from other technologies such as cable and (of course) wireless itself.

In 2014, Verizon paid $130 billion to European telecom Vodafone (VOD) for full ownership of Verizon Wireless. Verizon now carries a high amount of long-term debt on its balance sheet, partly due to that purchase. And we saw above that Verizon’s share count increased significantly at the same time.

The upside to the deal is that Verizon Wireless is a cash machine. According to Verizon’s investor relations department, Verizon Wireless is the largest and most profitable wireless carrier in the country. Take a look at Verizon’s free cash flow, which shows the amount of cash the company generates from its operations after deducting money spent on capital expenditures.

Note the overall growth trend. The amount per share dropped in 2014 after the company issued new shares (discussed above), but the cash flow immediately began to grow again the following year.

The significance of the cash flow is that Verizon is able to finance its operations and capital needs, and still has enough to pay billions of dollars in dividends to shareholders.

This graph from Trefis shows how big a portion of Verizon’s total business is dependent on wireless. 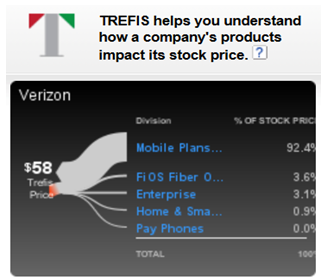 Verizon Wireless provides about 75% of Verizon’s revenue, and per the Trefis graph contributes 92% of VZ’s value. Verizon Wireless is considered to be the industry leader in coverage and quality. Customers trust Verizon’s network reliability and performance: The percentage of customers who left the company for a competitor’s service stood at an industry low of < 1% last year.

You have undoubtedly seen the many ads touting VZ’s network’s coverage, clarity, and the like. The company has developed and maintained a consistent brand message about its network. Forbes ranks Verizon’s brand as #21 most valuable in the world.

Verizon constantly increases the density of its network. In 2015, VZ invested more than $11 billion not only to meet surging demand for wireless data and video, but also to get the network ready for 5G wireless technology. The network covers 98% of the US, and VZ has spent more than $111 billion since 2000 on it.

This chart shows how devices connected to VZ’s network grow quarter by quarter – 2 million more devices in Q2 2016 alone. About 86% of devices are now smartphones, and about 96% of those use 4G LTE technology, which in turn drives increased data and video usage. 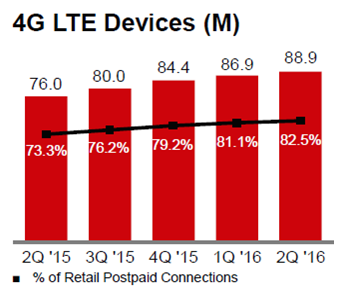 Verizon’s wireline business provides about 25% of revenue. The company has been selling off pieces of this fading business for years. It competes with cable companies for Internet access, phone, and television customers, and it will not be a driver of future growth.

Verizon’s strategy for future growth is centered on three areas:

The Internet of Things refers to the growing number of devices, appliances, vehicles, controllers, and other “things” that are connected to the internet.

5G – the next generation of wireless technology – is expected to lead to a huge new set of products. Verizon states that the benefits of 5G technology include high-speed data (30 to 50 times faster than 4G) and greatly improved quality.

Digital advertising will come from the provision of content. This is a new area for Verizon. In 2015, Verizon spent $4 billion to acquire AOL, and earlier this year it agreed to a $4.8 billion purchase of several operating assets from Yahoo. The deal will close in early 2017.

These acquisitions will move Verizon into content such as finance, news, and sports, along with which will come digital advertising technology and opportunities. The acquisition of Yahoo will bring more than 1 billion monthly active users, 600 million of which are on mobile. The AOL and Yahoo acquisitions will help diversify Verizon’s revenue from telecommunications, which is more commoditized and almost utility-like.

It is too early to see whether the move into content and digital advertising will be a successful growth strategy. Currently, the revenue from these initiatives is tiny compared to Verizon’s business as a whole.

Note: I did not see a specific explanation in the S&P Capital IQ report about why it rates Verizon’s business quality as “below average.” In its notes, S&P states this about its quality grades: “Growth and stability of earnings and dividends are deemed key elements in establishing S&P Capital IQ’s earnings and dividend rankings for common stocks, which are designed to capsulize the nature of this record in a single symbol.”

Verizon’s Financials
Verizon has an extremely high ROE (return on equity) of 86%. I usually consider anything around 12%-15% or more to be attractive.

That’s the good news. The bad news is that it is largely a result of extremely high debt. Per Morningstar, VZ’s D/E (debt to equity) ratio has risen from 1.4 in 2012 to 4.8 in the most recent quarter. For comparison, the average D/E ratio for all Dividend Champions, Contenders, and Challengers is 1.08.

You can see the jump in ROE when Verizon increased its debt load in 2014 in the following chart. Prior to 2014, Verion’s ROE had been running in the 10% range. 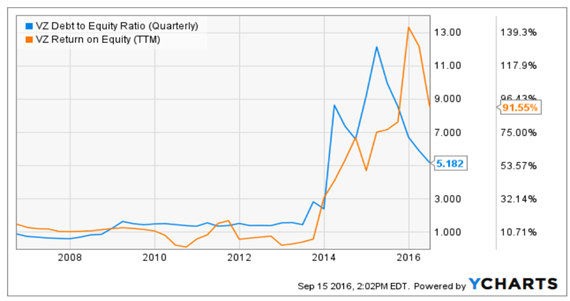 The company has indicated an intention to reduce its debt to levels similar to those it had prior to 2014 by the 2018-2019 time-frame.

Verizon’s earnings per share (EPS) growth over the past 5 years has been a high 37% (as of the end of 2015), but that is a little misleading based on the particular timeframe. The EPS growth rate has actually jumped around a bit. This year EPS is expected to drop by 2%, and next year it is expected to rise by 3%.

Analyst consensus estimates of 3-5 year earnings growth are around 3% per year.

Overall, Verizon’s financial picture is a mixed bag. The best things about it are its consistent cash flow performance and its ROE. The negatives are slow growth and high debt.

Step 1: FASTGraphs Default. The first step is to compare the stock’s current price to FASTGraphs’ basic estimate of its fair value.

That is usually based on a price-to-earnings ratio (P/E) of 15, which is the long-term average P/E of the stock market as a whole.

However, FASTGraph’s estimate of the next two years’ earnings growth just 0.5% per year. Therefore, the software lowers the fair-value line in this case from 15.0 to 13.2, shown as the orange line on the following chart. 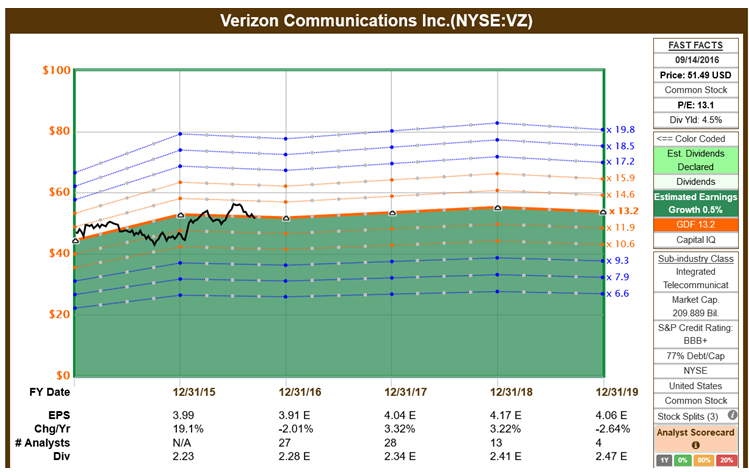 By this first method of appraising valuation, Verizon is fairly priced. Its actual price (the black line) is basically right on the orange fair-value line. 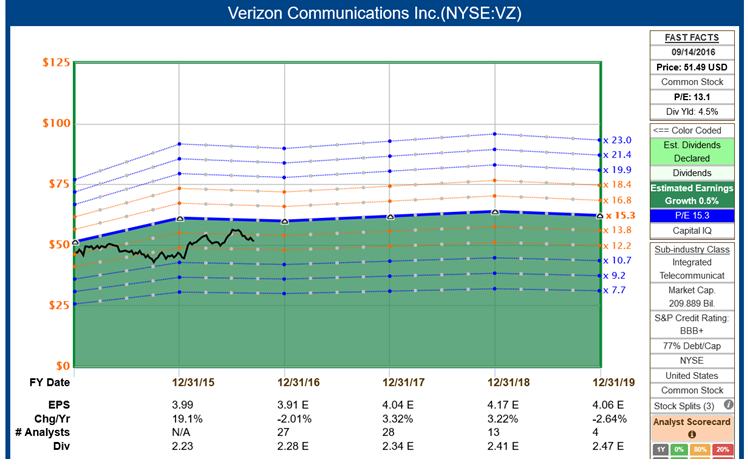 On this graph, we can see that Verizon looks a little undervalued by this method of appraisal. Its 10-year P/E average has been 15.3, compared to its actual current P/E of 13.1.

Using the ratio of P/Es, I calculate a fair value of $60. VZ’s actual price is about 14% under that right now.

On Morningstar’s 5-star system, Verizon gets 3 stars. That means that they believe the company is fairly valued at its current price. They calculate a fair value of $50.

Verizon is fairly valued by this method as well. Its current yield of 4.5% is just under its 5-year average yield of 4.6% (per Morningstar).

The ratio of those two yields suggests a fair value of $50.

Valuation Summary:
In computing valuations, I consider prices within 10% of the calculated fair value to be within the fair value range. Assessing valuation is inherently imprecise, so rounding prices to the nearest dollar and using sensible ranges is, in my opinion, better than trying to achieve false precision.

Using the 4 approaches just described, our valuation summary for Cisco looks like this: 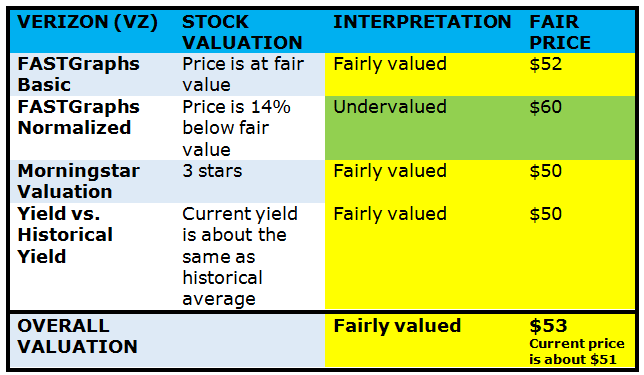 For a reality check, I also looked at S&P Capital IQ’s valuation analysis. Their 12-month price target for Verizon is $56, and they have a 3-star “hold” rating on the stock.

Miscellaneous Factors
There are a couple of factors that do not fall into the earlier categories.

Verizon has one of the lowest betas that I have seen. At 0.2 over the past 5 years, Verizon’s price has moved only 20% as much as the market.

As always, do your own due diligence, and please do not take this article as a recommendation to buy or hold Verizon. Instead, use it to inspire your own research and diligence. Always invest with an eye to your tolerance for price volatility and in a manner that advances your goals.