I began this Dividend Growth Stock of the Month series at the beginning of 2015. Here are the stocks covered so far in 2016:

This month, we turn our attention to a company that I evaluated for valuation in May: Boeing (BA).The company also was identified in my recent article, “60 Smart Beta Dividend Growth Stocks.”

At that time, I determined that Boeing was about 10% undervalued. Its price is practically unchanged since then, so one would think that it is probably still undervalued. We will check that at the end of this article.

But first, let’s examine the company itself, both as a dividend growth opportunity and as a business enterprise.

Just to briefly introduce the company, Boeing is the world’s largest manufacturer of commercial jets and the second largest military weapons maker.

Overall, this is a very good dividend resume, with lots of green categories.

The only caution flag is the short 5-year streak of dividend increases. That is the minimum number of consecutive increases that I consider for dividend growth investing. Even 5 years is too short a time to say that annual dividend increases are baked into the corporate culture.

That said, the company has not cut its dividend in over 30 years. The following chart shows BA’s long-term dividend history. 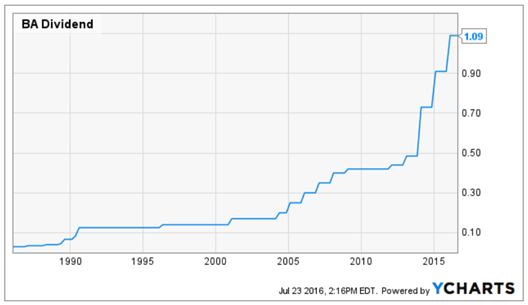 You can see that Boeing has increased its dividend many times since the 1980s, without a cut, but that it has also had stretches of years when it kept its dividend frozen.

[ad#Google Adsense 336×280-IA]The most recent such frozen dividend was during and after the Great Recession.

It is noteworthy that Boeing did not cut its dividend during the recession.

That makes its dividend record better than many companies that were forced to cut dividends during those difficult years.

Since it resumed raising its dividend in 2012, Boeing has increased it by leaps and bounds, including 25% last year and 20% this year.

Those kinds of increases are not sustainable.

Boeing is currently paying out 60% of its earnings as dividends.

I would expect future increases to become smaller, eventually settling into the 8%-per-year area, or roughly matching Boeing’s earning-per-share gains.

Boeing’s dividend is A-rated for safety, meaning that a near-term cut is unlikely:

Another thing that Boeing has going for it is a declining share count for several years. 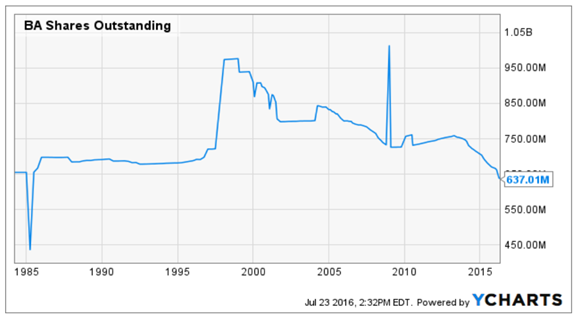 A declining share count means that each share represents more of a slice of the whole company. It also means that future dividend increases are easier to finance, because there are fewer shares to pay them to.

Morningstar awards Boeing a wide economic moat, its highest rating. The wide-moat rating is based mainly on Boeing’s facility with the highly regulated nature of its business combined with high customer switching costs.

Boeing essentially is in a duopoly with Airbus in the commercial aircraft market. The company has the technical knowledge, systems, and workforce required to design and build commercial aircraft, and most importantly to get them certified. Certification takes years and requires a manufacturer to comply with thousands of safety and performance regulations.

Risks to the company’s business model include:

• The cyclicality of its business. Commercial airliner orders rise and fall with the domestic and global economies. Morningstar rates Boeing as a cyclical stock type, meaning that it tends to be sensitive to changes in economic conditions.
• Variability in defense orders.
• Ability to continue to cut costs and turn order backlog into profitable operations going forward.

Here is a summary of Boeing’s overall quality:

Boeing has a good financial picture to go along with its good dividend resume.

The company’s return on equity (ROE) is extremely high, and it has been on a rising trend. That’s good. But often high ROEs are accompanied by high debt levels. That is the case here, as will be discussed below.

This snip from a FASTGraph chart shows the trends in BA’s earnings per share (EPS) since 2007, including estimates for 2016 and 2017.

As you can see, Boeing’s earnings vary from year to year, which is evidence of its cyclicality.

EPS rose steadily since the end of the Great Recession until last year, when the company registered a 10% drop in EPS. And the company’s EPS is again expected to drop in 2016, before recovering in 2017 and beyond.

There is an asterisk on the earnings drop in 2016. Boeing just announced 2d-quarter earnings for 2016 (July 27), and its announcement included special one-time charges. Those are shown in the 3rd bullet point on the slide below.

Other than that, Boeing maintains a positive overall view of its business environment due to healthy industry fundamentals. The one-time charges will not affect Boeing’s cash flow, share repurchase program, or dividend. Boeing took about 2% of its shares off the market in Q2. 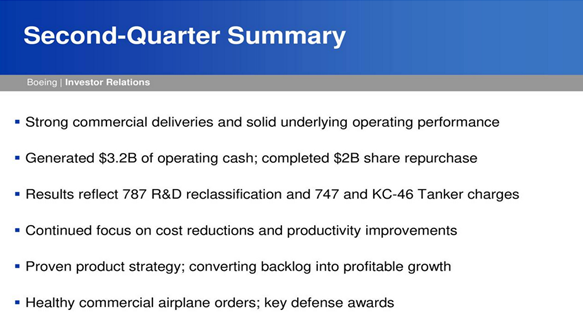 The company’s cash position improved in the 2nd quarter. It has $9.3 Billion in cash and marketable securities. 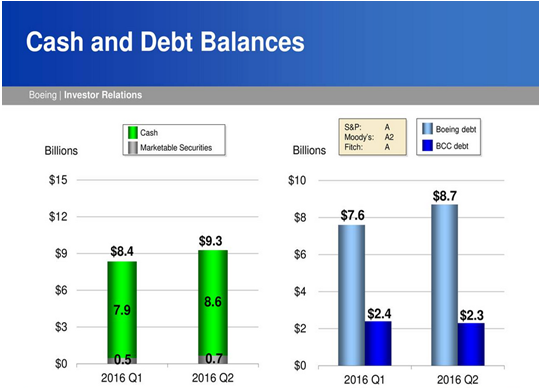 Despite the reduction in core EPS guidance for 2016 to reflect the impact of the one-time charges, Boeing maintained its revenue and cash flow guidance based on the underlying strength of its business. 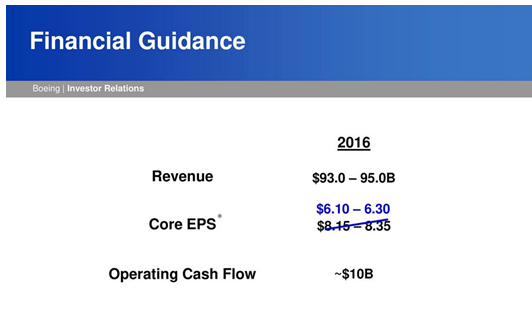 Going forward the next 3-5 years, analysts project EPS growth at 11% per year, which is very good for a company of Boeing’s size.

Boeing’s debt-to-equity (D/E) ratio, at 216%, does not compare favorably to the average D/E ratio of all Dividend Champions, Contenders, and Challengers, which is 109%. Clearly Boeing has made the financial decision to take advantage of low interest rates to tilt its capital structure towards debt.

I do not love that, but on the other hand, it has helped enable Boeing to retire about 35% of its shares over the past 10 years, which in the large picture is beneficial to shareholders. There is little question about Boeing’s ability to repay its debt. S&P grants the company an A credit rating, which is a high rating. 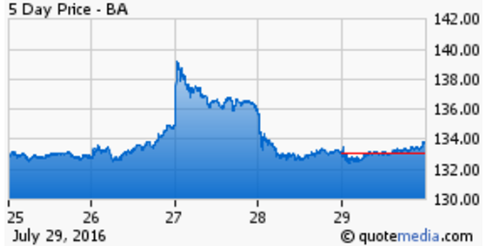 Because of its earnings release last week, in which Boeing took some special charges that lowered its guidance for 2016, Boing presents a special situation in valuation at the moment. 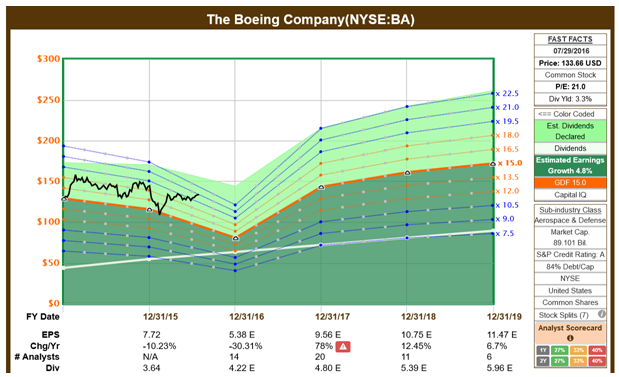 On this graph, Boeing appears to be far overvalued. Its actual price (the black line) is 40% above its fair value price.

This picture is largely a result of Boeing’s earnings announcement last week. The reduced earnings guidance based on the one-time charges lowered “consensus” 2016 earnings considerably. That causes the orange line to dip and places the black line far above it. Notice how different the picture would be if you connected the orange line at 12/31/15 to 12/31/17.

But that is not the data that we have, so Boeing’s valuation is impacted by the special charges in 2016. Using the data, a fair price for Boeing would calculate to just $95 by this method.

Step 2: FASTGraphs Normalized. The second valuation step is to use Boeing’s own long-term average P/E ratio as the benchmark. This normalizes the picture by adjusting for the fact that some stocks seem always to have a high valuation, while others always seem to have a low valuation. 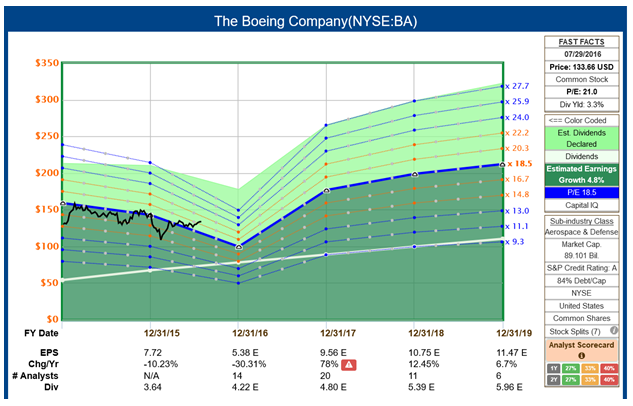 BA’s 10-year average P/E valuation is 18.5, higher than the market’s long-term average of 15, while its current valuation is 21. Thus under this method, BA looks overvalued by 21 / 18.5 = 14%. This method again is impacted by the recent earnings release, which pulled the dark-blue fair value line down for 2016.

If you could connect the 12/31/15 data point to the 12/31/17 point, Boeing would look undervalued. Indeed, when I evaluated Boeing in May, it did look 16% undervalued. That is a 30-percentage-point valuation swing because of the one-time charges. But again, we need to use the data that we have, not data that we wish we had.

Using this method, I would calculate a fair value of $118. Boeing’s actual price is 13% above that at the moment.

The one-time charges for 2016 have little impact on this method of valuation. Boeing gets 3 stars on Morningstar’s 0-5 scale. That means that they believe the company is fairly valued. They calculate a fair value of $138, a little above Boeing’s actual price.

Step 4: Current Yield vs. Historical Yield. Finally, we compare the stock’s current yield to its historical yield. It is better to be near the top of that range than the bottom.

By this method, Boeing is considerably undervalued. Its current dividend of 3.3% is 50% above its 5-year average dividend of 2.2% (see the red dot).

In this method, I cut off the difference at 20%, because yields can vary a lot. At that cutoff point, Boeing is currently 20% undervalued, and its fair price would be $167.

Using the 4 approaches just described, our valuation summary for Boeing looks like this at Boeing’s current price of about $134. 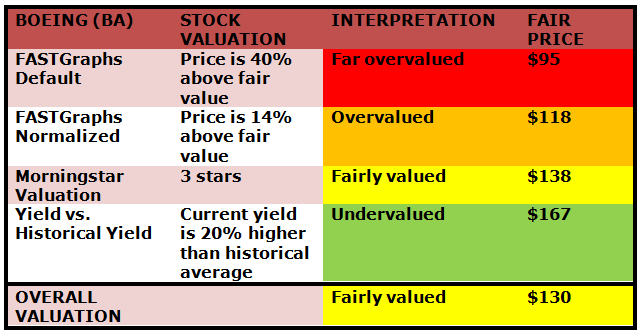 Rarely do we see such a wide disparity in valuations from the 4 methods. As described earlier, the disparity is caused by Boeing’s decision to write off certain one-time charges in 2016, which will lower 2016’s official earnings considerably while leaving estimates for future years virtually unchanged.

For a reality check, I also looked at S&P Capital IQ’s fair value estimate. Their current fair value estimate is $132, which is nearly the same as mine. They have a 12-month price target for Boeing of $172 and a “buy” rating on the stock.

Beta measures a stock’s price volatility relative to the market as a whole (represented by the S&P 500). Most dividend growth investors prefer to own stocks with low volatility, because then you are less likely to become emotional about them when their price drops.

Boeing is a little more volatile than the market. That is typical of cyclical stocks. If you tend to fret over price drops, Boeing might not be a good choice for you. On the other hand, if you do not worry much about short-term price volatility, but instead focus on long-term fundamentals and rising dividends, Boeing may be a good choice.

The analysts’ recommendations come from S&P Capital IQ. Their most recent report on Boeing shows an average recommendation of 3.7 on a 5-point scale, where 3.0 = Hold and 4.0 = Buy.

• Entrenched leading airline manufacturer in a duopoly business. Enjoys strong order backlog.
• Wide-moat business with strengths in the design, development and manufacture of commercial aircraft, as well as in navigating myriad regulations to get them certified.
• Long-term government contracts in its defense segment.
• Dividend safety is high, protected by strong cash flows.
• Short but strong dividend growth record: 5 years of dividend increases averaging 17% per year since the company reinstituted annual increases in 2012.
• Has maintained dividend for more than 30 years without a cut.
• High and rising return on equity (ROE). Strong cash flow and $9B cash on hand. Projected 11%-per-yer EPS growth after 2016.
• Fair valuation.
• Steadily declining share count as the company buys back and retires shares.

• Cyclical nature of its business.
• Variability in defense orders.
• EPS decreases in 2015 and 2016.
• High debt level (although it also has a high credit rating).
• Only 5 years of dividend increases. Company may not be deeply committed to annual increases. It has frozen its dividend many times, although it has not cut it in more than 30 years.

On the basis of this analysis, I have decided to add Boeing to my Dividend Growth Portfolio. That purchase should happen shortly, when the dividends in my portfolio reach the $1000 threshold that I use to trigger new purchases.

As always, do your own due diligence, and please do not take this article as a recommendation to buy Boeing yourself. Instead, use it to inspire your own research. Always invest with an eye to your personal tolerance for price volatility and in a manner that advances your goals.