I recently read (on another site) that Target (TGT) was way undervalued.

Since Target is a Dividend Champion with a 49-year streak of dividend increases, that caught my attention. Target is also a stock that got a vote (for low volatility) in my smart-beta article. So I decided to value the company using my 4-step process.

In valuing companies, I grade them on the following scale:

The colors are like those on a traffic signal. The attractiveness of an investment opportunity is best at the green end of the scale and worst at the red end. Green suggests that the stock is on sale; yellow is neutral; orange means caution; and red suggests that it is selling for a lot more than fair price.

Value investors want to buy stocks that are on sale or attractively priced, and avoid those that are overpriced.

Let’s look at Target. First off, Target is A-rated for dividend safety by Safety Net Pro.

That’s a good sign. I usually don’t even look at stocks unless they get an A or B from Safety Net Pro.

Target gets an A, so let’s go ahead to investigate Target’s valuation.

In this first step we compare Target’s current price to FASTGraphs’ basic estimate of its fair value.

FASTGraphs starts us off with a price-to-earnings (P/E) ratio of 15, which is the long-term historical average for the whole stock market. It is a good place to start.

The basic fair value estimate is shown by the orange line on the following graph. Every point on the line is simply Target’s earnings multiplied by 15. The thin lines are 10% increments above and below the orange fair-value line. 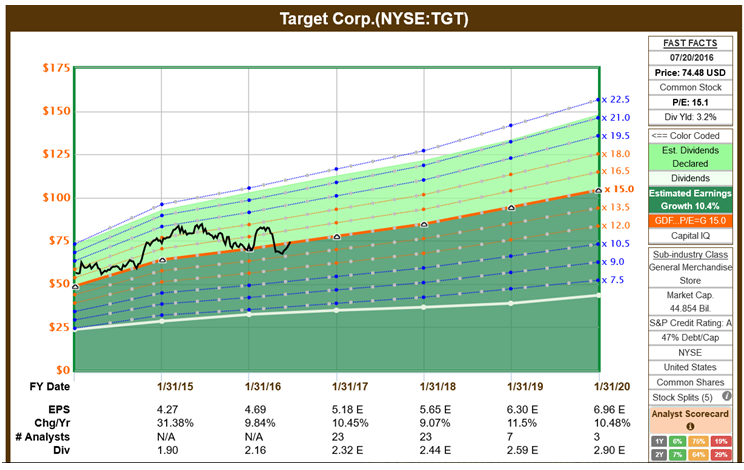 As you can see, TGT’s current price is practically smack dab on the orange fair-value price line.

So by this method, Target is overvalued by 1%.

The fair value for Target under this first valuation step is $74, or just less than its actual price.

Now let’s see what the other 3 steps say.

Next, instead of using the market’s long-term P/E average of 15 to define fair value, we use Target’s own long-term average P/E ratio.

You can see why this is sensible. Many stocks typically trade at valuations above or below the P/E of 15 that we used in the first step. A stock’s own long-term average P/E reflects the sentiment that investors typically have about the company and its stock.

I call this second step the “normalized” valuation. We are adjusting our notion of fair value to what the market has been saying about the stock for a long time. I generally use 10 years.
Target’s 10-year avergae P/E ratio is shown by the blue line in the following graph. 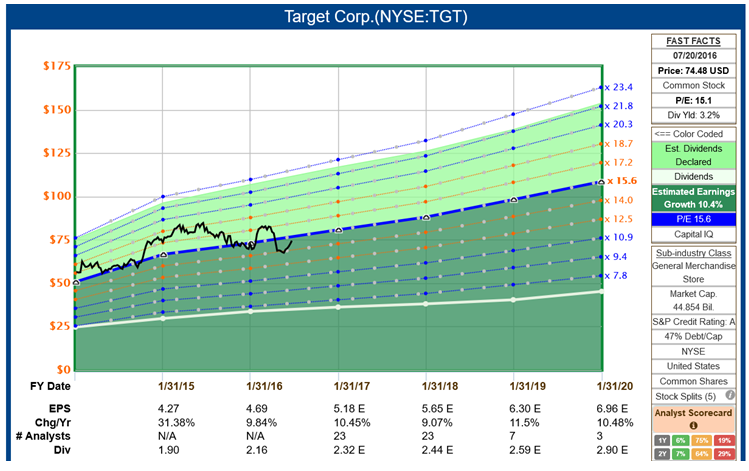 The fair price for target using this second step is $77.

Our next approach is to consult Morningstar. They use a discounted cash flow (DCF) model to estimate a company’s fair value. Using a variety of data points, estimates, and a mathematical model, they predict the company’s future cash flows. Then they discount them all back to the present. The sum is the estimate of the stock’s fair value.

Morningstar also thinks that Target is fairly valued. That is what 3 stars means on their 5-star system. Morningstar calculates a fair price of $74 for Target.

Now we put the 4 steps together and average them out.

I consider any stock to be in the “fair value” range if its price is within 10% of my fair value price. Target is priced 7% below my estimate of $80 fair value, so I think it is fairly valued.

In other words, I do not agree with the article mentioned at the beginning that Target is way undervalued right now. I think it is fairly valued. That does not mean it is not a decent buy right now, but it is certainly not on sale.

As always, do not use this article as a recommendation about Target. Always do your own due diligence before buying anything.