Wells Fargo (WFC) is one of the nation’s largest banks.

WFC is a diversified financial services company with operations around the world. WFC’s services span 80 business lines. The company was founded in 1852, and it became a national banking association in 1968.

[ad#Google Adsense 336×280-IA] In 1998, Wells Fargo was acquired by Norwest Corporation, which adopted the Wells Fargo name, becoming the 7th largest bank in the country.

In 2008, WFC purchased Wachovia at the height of the financial crisis.

When that merger closed in 2009, WFC became the 4th largest bank by assets in the United States, a position it still holds.

Wells Fargo had been a Dividend Contender until the financial crisis, but it had to cut its dividend in the aftermath of the crisis.

Having regained its footing, it is now a Dividend Challenger with 6 consecutive years of dividend increases under its belt.

WFC was considered the strongest of the “too big to fail” banks throughout the financial crisis. You may know that WFC is the 2d-largest stock holding of Berkshire-Hathaway under Warren Buffett. Buffett is looking to buy more:

With [WFC] being down this year, it’s…no surprise that Warren Buffett said he wants the Fed’s permission to buy even more shares. Wells is already Buffett’s second-largest position. Due to share buybacks, Buffett’s personal position combined with Berkshire’s share, put the total holding over 10% ownership of Wells. Buffett has said that Wells is the single investment he would feel safest to place his entire net worth in for the next ten years. Charlie Munger, Buffett’s alter ego, said that Wells is the standard by which they judge all other investments. That’s how highly they think of WFC. [Source: CrossingWallStreet.com.]

WFC raised its dividend 1.3% in June, and it has a current yield of 3.1%. It pays quarterly; the next payout should be in September.

Let’s use my 4-step process to see whether Wells Fargo is fairly valued.

FASTGraphs’ standard is based on a price-to-earnings (P/E) ratio of 15. That is the long-term historical average for the whole stock market.

That fair value estimate is shown by the orange line on the following graph, which multiplies WFC’s earnings per share by 15 to arrive at a fair price.

The black line is WFC’s actual price. The thin lines are 10% increments above and below the orange fair-value line. 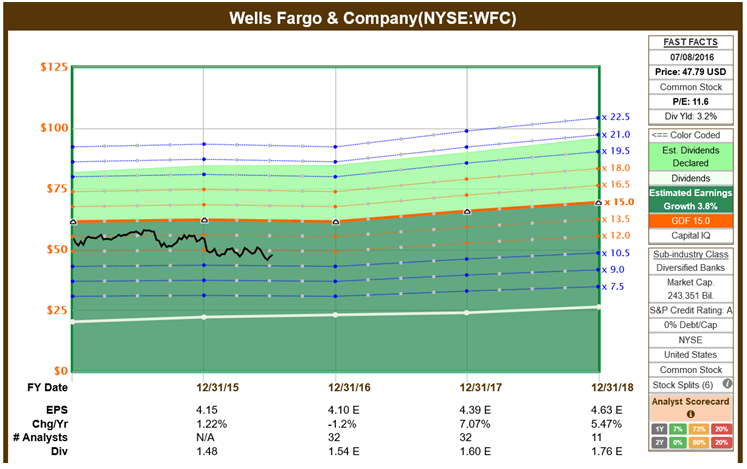 By this first method, you can see that Wells Fargo is trading at a discount to fair value. The black price line is below the orange fair-value line.

Let’s calculate what the discount is.

So this first approach is suggesting that WFC is 23% undervalued at its current price of just under $48.

That indicates a fair price of about $62. Here is that calculation: $48 / 0.77 = $62.34. I drop the cents and round to the nearest whole dollar. I do that to avoid a false sense of precision. Always remember that these are estimates.

A stock that is 23% below fair value is significantly undervalued in my book. I grade valuation on a 5-step scale:

The degree of investment opportunity is best at the left (green) end of the scale and worst at the right (red) end. Since no one knows the future, I treat valuation as an estimate of the probability of future outcomes over the long term (meaning 5+ years).

I use valuation ranges rather than precise price points, because valuation involves estimates about the future, and so it is inherently unknowable precisely. My ranges represent increments of 10% above and below fair value:

Now let’s see what the other 3 steps say.

Next, we use Wells Fargo’s long-term average P/E ratio to define fair value. This allows us to adjust for the fact that many stocks typically trade at valuations above or below the FASTGraph standard P/E of 15 that we used in the first step.

I usually select the 10-year average P/E to represent “normal.” That ensures that I am including the Great Recession of 2007-2009 in the calculation as well as more conventional years.

The normalized fair value estimate is shown by the blue line in the following graph. 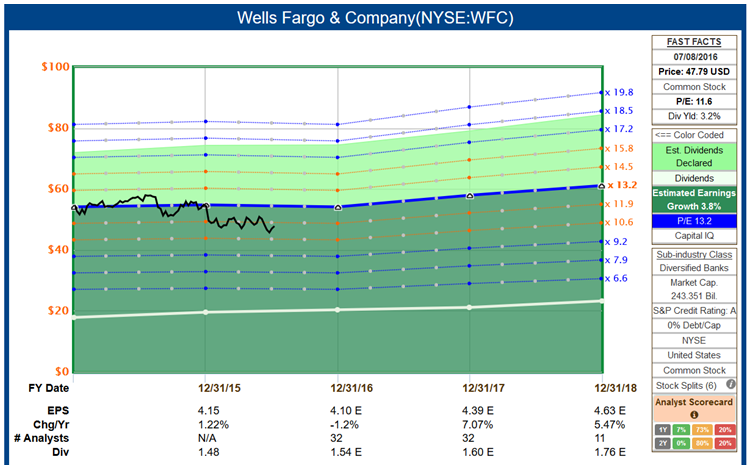 Here we see that Wells Fargo typically trades for less than the market average, at a P/E ratio of 13.2.

Even given that, WFC’s current valuation is undervalued. At a current P/E ratio of 11.6, WFC is 12% undervalued by this 2d method, suggesting a fair value price of $54.

Our next approach is to consult Morningstar. They use a comprehensive net present value (NPV) technique for valuation. This involves discounting all of the stock’s future cash flows back to the present. When this technique is done right, many investors consider it to be the finest way to value a stock.

Morningstar registers another vote for undervaluation. On its 5-star system, 4 stars = undervalued. Morningstar calculates a fair price of $61.

Because I consider this 4th method to be the least precise, I cut off undervaluation percentages at just under 20%. The cutoff ensures that a stock is never called “far undervalued” by this method.

Using the 20% ratio moves the undervaluation of WFC from 39% to 20%. The math at this level suggests a fair value price of $60 for WFC.

Now we put the 4 steps together and average them out.

Note that in the chart above, I rated Morningstar’s 4-star grade as “undervalued,” even though the degree of undervaluation is 21%. Their assignment of stars overrides my normal definitions of ranges. They are apparently looking for even more of a margin of safety from Wells Fargo than I normally use. That’s OK with me. I always go with the most conservative estimate when faced with this kind of inconsistency.

Bottom line, I conclude that Wells Fargo is about 19% undervalued at the present time. It has a fair value price of $59 compared to its actual current price of about $48.

I would certainly consider buying Wells Fargo at its current price. Indeed, it is on the short list of candidates for the next dividend reinvestment in my Dividend Growth Portfolio. There are also a few other stocks that I want to check out. I will keep you posted.

As always, do not use this article as a recommendation about Wells Fargo. Always do your own due diligence before buying anything.