Stocks Covered So Far this Year

I began this Dividend Growth Stock of the Month series at the beginning of 2015. Thus far in 2016, these are the stocks that have been covered:

This month, we turn our attention to one of the largest electric utility companies in the world. Southern Corporation (SO) is an Atlanta-based electricity supplier to a large area of the Southern USA.

[ad#Google Adsense 336×280-IA]It is a Dividend Contender with a 15-year streak of increasing its dividend every year.

Southern just declared a dividend increase of 3.3%, and the ex-dividend date for the new payment is coming up on May 12.

I am interested in buying this company myself, so I want to analyze it before that date.

On the ex-dividend date, a new purchaser does not receive the upcoming dividend; they have to wait 3 months for the next distribution.

So to get Southern’s next dividend, I would have to buy the stock on or before May 11, the day before the ex-date. To brush up on the significance of the ex-date, please see Dividend Growth Investing Lesson 1: What Is a Dividend?

Utilities are a unique kind of business. They normally have legal monopolies in their territories, which they receive in return for being regulated by the authorities. That means that some characteristics that would be a concern in other industries are less so in the utility industry. A legal monopoly can obviously be a powerful business advantage, but of course it comes at the cost of the regulation itself.

The best parts about Southern’s dividend resume are its yield (4.5%) and its dividend growth streak (15 years, including this year).

Southern’s dividend growth record is typical for a utility: Slow and steady. Every increase in the past 10 years has been in the 3%-4% range. I do not see a reason for concern with the slight decline in increases over the past 5 years.

Utilities are capital-intensive businesses. They require lots of money for investment in power plants, transmission and storage systems, and the like. Utilities typically raise money from both the debt and equity markets. That means that they issue shares periodically, so their share counts tend to rise. Southern is no exception. 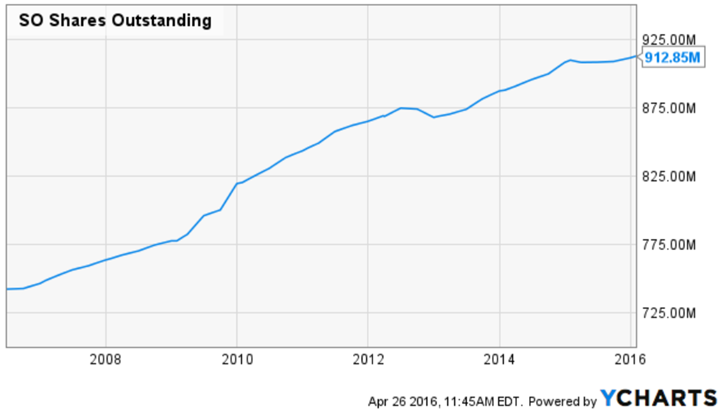 A rising share count is generally a caution flag, in my opinion. But if you are going to invest in a utility, it is part of the picture. Its effect is ameliorated somewhat by the benefits of the legal monopoly status.

But again, high payout ratios are typical of utilities. The following chart superimposes Southern’s annual dividend payments over its earnings payout ratio. You can see that no matter what the payout ratio has been over the past 10 years, Southern has raised its dividend every year like clockwork. 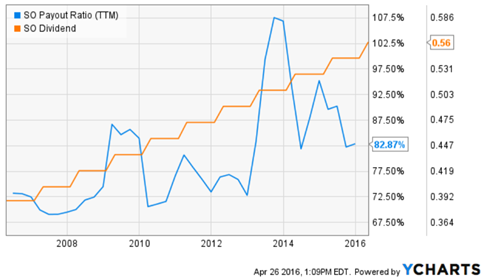 Southern’s been paying dividends, without missing a quarterly payment, every year since 1948. Utility companies can have relatively high payout ratios, compared to most businesses, because their financial results are usually stable as a result of their monopoly and regulated status. There is usually little business risk.

On balance, I do not see the payout ratio as a strong concern about Southern’s dividend reliability. Quite the contrary, I see Southern as a reliable dividend growth company.

Southern is a holding company that includes the 4 regulated utilities shown on the map below. The utilities serve about 4.5 million customers in Georgia, Alabama, Florida, and Mississippi. 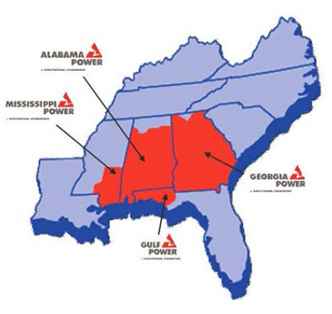 With regulated utilities, government controls the rates they can charge while still allowing the companies to earn a reasonable return in order to continue to provide quality service. Of course, the regulatory environment can also present risks, precisely because rates – prices – are controlled by the regulator. Thus, regulatory decisions can significantly affect the returns a utility company gets.

Each state’s regulatory body is different from the next. Southern is fortunate to operate in 4 of the top 8 most “supportive” jurisdictions as rated by Regulatory Research Associates. (Source: Southern Company Investor Presentation)

Southern generates electricity in a variety of ways. Coal generated 33% of Southern’s total megawatt hours in 2015, gas accounted for 47%, nuclear was 16%, and hydro power was 3%.

Completion of projects like these presents risks. For example, Trig was originally expected to cost $5 billion and go into service in 2014, but it has been delayed by 2 years and experienced over $1 billion in additional costs.

The nuclear plants are about 26% finished. Costs have escalated from an estimated $14.1 billion in 2009 to over $20 billion today. Delays are now over 3 years. In its 2015 annual report, Southern stated:

Construction of the two new nuclear units at Georgia Power’s Plant Vogtle, among the first to be built in the United States in more than three decades, is also progressing well. Current in-service dates are estimated to be 2019 for Unit 3 and 2020 for Unit 4. Once units 3 and 4 join the existing two Vogtle units already in operation, Plant Vogtle is expected to generate more electricity than any other U.S. nuclear facility, enough to power more than 1 million homes and businesses.

There is risk that these projects receive unfavorable rate treatment from regulators, who may become unwilling to pass additional cost overruns onto customers.

AGL Acquisition—Expected to Close in Late 2016

Southern’s business and geographical footprint will significantly change after it closes its acquisition of natural gas utility AGL Resources (AGL). Approval for the acquisition is expected to be finalized later this year. 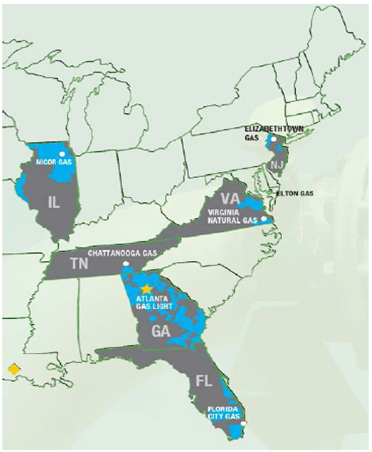 AGL is the largest U.S. gas-only local distribution company, serving customers in 7 states. AGL is itself a Dividend Contender with a 14-year streak of increasing dividends.

The South is one of the fastest growing areas of the country, which makes Southern a relatively more attractive utility than many others. Continuing business growth in the Southeast bodes well for continued expansion in power demand.

Morningstar awards Southern a narrow moat rating, based on the constructive nature of the regulatory environment where Southern operates. Its regulators have traditionally allowed utilities to recover investments with a reasonable return on their investments.

The following display shows Southern’s earnings growth calculated with and without costs related to its major capital projects, the AGL acquisition, and certain insurance settlements..

As you can see, Southern’s basic business operating results show slow, steady growth. Factoring in the projects creates some volatility in the record.

Southern’s debt ratio, at 110%, is typical of utilities. My observation has been that with the low interest rates in recent years, companies have taken on more debt across the board. The average debt/equity ratio for all 773 Dividend Champions, Contenders, and Challengers, in fact, is 115%, which is actually a bit higher than Southern’s.

As the following data from Morningstar shows, Southern’s debt ratio has been steady over the years.

Southern’s A- credit rating puts it in the middle of the investment-grade range.

Step 1: FASTGraphs Default. The first step is to compare the stock’s current price to FASTGraphs’ default estimate of its fair value. The default estimate is based on a price-to-earnings ratio (P/E) of 15, shown by the orange line on the graph and the scale on the right. 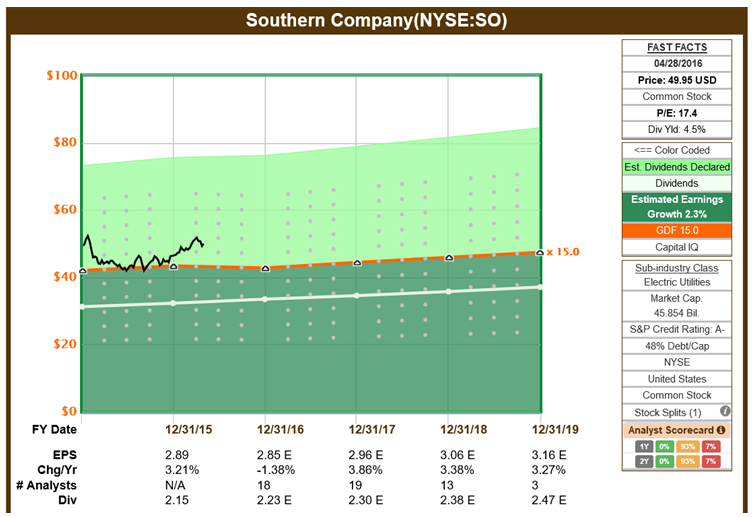 By this first method of appraising valuation, Southern is overpriced. Its actual price (the black line) is above its fair value when calculated by this method.

Step 2: FASTGraphs Normalized. The second valuation step is to compare Southern’s price to its long-term average P/E ratio. This lets us adjust for the fact that some stocks, under the “wisdom of the market,” always have a high valuation, while others always have a low valuation. 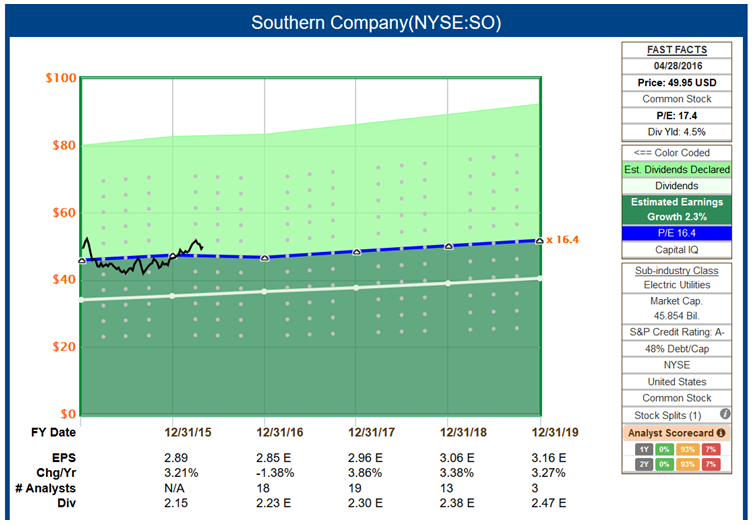 This changes the picture a bit. That is because Southern’s average valuation over the past 10 years has been P/E = 16.4, which is higher than the ratio of 15 used in the first step. Southern is normally overvalued a little, which suggests that the market has a high degree of confidence in the company.

In fact, I noticed on FASTGraphs that Southern’s average valuation over the past 18 years has always been between 16.0 and 16.9. That is the very definition of stability and market consistency.

By this second method, Southern’s price is fair. Using the ratio of the P/Es, I calculate a fair value of $47.

On Morningstar’s 5-star system, Southern gets 3 stars. That means that they believe the company is fairly valued. They calculate a fair value of $48. 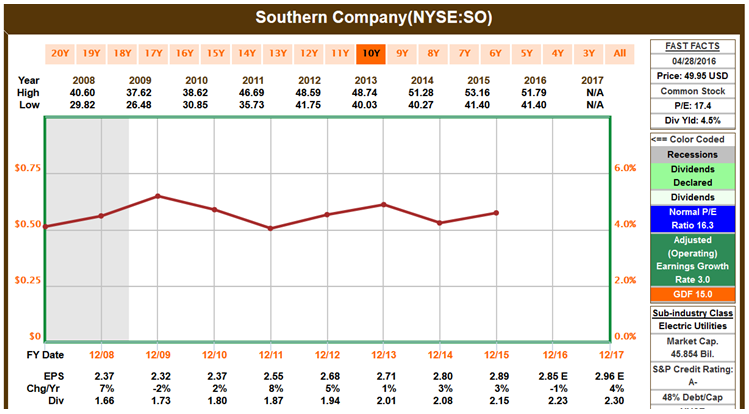 As you can see, Southern’s current yield is about equal to its long-term average. Morningstar shows its 5-year average yield as 4.5%, which is what Southern’s yield will be when the recent dividend increase kicks in.

So by this method, Southern is fairly valued, and its fair value price is $50.

In computing valuations, I consider prices within 10% of the calculated fair value to be within the fair value range. Assessing valuation is inherently imprecise, so rounding prices to the nearest dollar and using sensible ranges is, in my opinion, better than trying to reach a false precision.

Using the 4 approaches just described, our valuation summary for Southern looks like this: 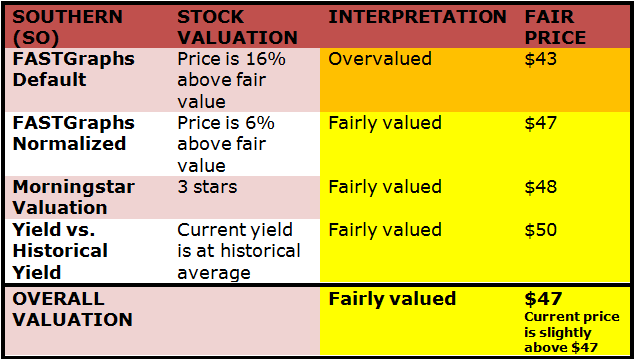 For a reality check, I also looked at S&P Capital IQ’s fair value estimate. Their 12-month price target for Southern is $47.

Southern’s beta of 0.02 (measured over the past 5 years) indicates a stock price that hardly moves compared to the market. It is the lowest beta that we have seen in this Dividend Growth Stock of the Month series. That makes it a pretty easy stock to not worry about most of the time.

The analysts’ recommendations come from S&P Capital IQ. Their most recent report on Southern shows the opinions of 20 analysts. Their average recommendation is 2.6 on a 5-point scale, where 3.0 = Hold and 2.0 = Weak hold. Most analyst reports are tilted toward short-term trading expectations rather than the long-term dividend growth goals that I have in these reports.

• Strong yield at 4.5%.
• Good dividend growth record standing at 15 years of dividend increases. Average increases are in the 3%-4% range, which is OK for a stock yielding 4.5%.
• Stable utility business in states with supportive regulators. The company’s rrelatively low prices and excellent reputation have led to good relations with regulators.
• AGL acquisition should fit nicely, bringing new growth opportunities and potential synergies from operating utilities in the same geographical area. Corporate attitude towards dividend should not change as a result of the acquisition.
• Decent financials: Steady low-growth company.
• Miniscule beta.

• Risk of poor business integration when the AGL acquisition is finalized.
• The two major projects could run into more delays and cost overruns. At some point, even supportive regulators may draw the line about passing costs through to consumers.

My bottom line is that this is a very good company with an excellent dividend track record. Its current price is a little higher than I would like, but it is within the fair value range.

I will seriously consider Southern for investment when my next dividend reinvestment opportunity comes up in May. If I decide to buy it, I will do so before the ex-dividend date on May 12.