Cummins (CMI) is a global power leader that designs, manufactures, sells, and services engines and related technology. The company has a network of 600 company-owned and independent distributor facilities, as well as more than 7,200 dealer locations in over 190 countries and territories around the world.

• a complete line of diesel and natural gas-powered engines for on-highway and off-highway use
• power generation systems, components, and services
• filtration, emissions, and fuel systems

Last May, Cummins increased its dividend for the 10th straight year. The amount of the increase was 25%. The company’s current yield is about 3.6%.

Cummins is A-rated for dividend safety by Safety Net Pro. Under their cash-flow-based method of analyzing dividend safety, Cummins’ dividend is considered to be extremely safe.

Let’s use my usual 4-step process to see how well valued Cummins is.

In the fhe first step, we compare the stock’s current price to FASTGraphs’ default estimate of its fair value.

That default estimate is based on a price-to-earnings (P/E) ratio of 15, which is the long-term historical average for the stock market. This fair value is shown by the orange line on the following graph. 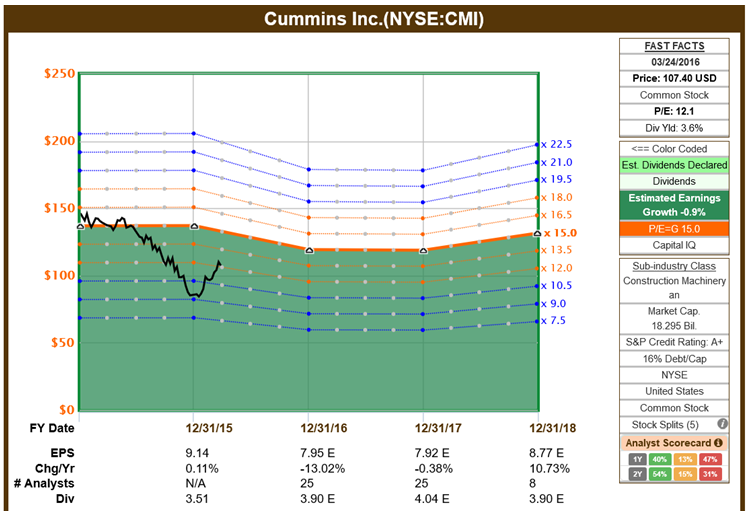 The black line is Cummins’ actual price. We can see that the stock is trading quite a bit below its fair value as reckoned under this method of appraisal.

In other words, Cummins is trading about 19% under its fair value when we use this method of appraisal.

Cummins has been around a long time, so I found myself wondering why its dividend increase streak is “only” 10 years.

The table above shows that Cummins froze its dividend from 2000-2005, paying the same amount each year. Note that they did not cut it or eliminate it, they simply stopped increasing it during that period.

Since then, its dividend has taken off like a rocket. Its 10-year dividend growth rate stands at 28% per year.

In the second step, we compare Cummins’ current P/E ratio to its long-term average P/E ratio. This helps adjust for the fact that many stocks typically trade at valuations above or below the default P/E ratio of 15 that we used in the first step. What we’re looking for is a stock trading no higher than its historical P/E ratio. 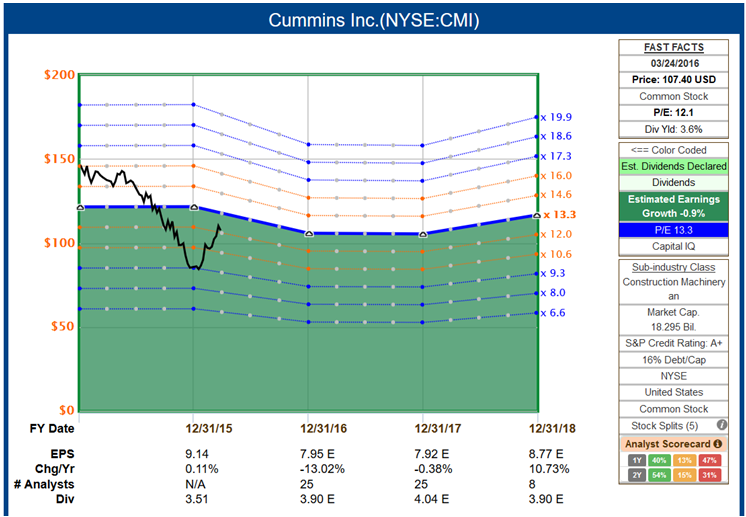 I selected 10 years for the period over which the historical P/E ratio is computed. That lets me pick up the 2007-2009 Great Recession as well as other “more normal” years.

For the selected period, Cummins’ average P/E has been 13.3, shown by the blue line. Its current valuation is 12.1 as seen earlier.

So by this method, Cummins’ valuation is 12.1 / 13.3 = 0.91, meaning that its price is about 9% under fair value. I consider that to be near to being undervalued, but still in the fair value range. The fair price calculated by this method is $118.

I like to use Morningstar valuations for two reasons. First, they are an independent source. They do not have a brokerage, and they are not trying to sell me anything. So their motivation is confined to attempting to be as accurate as possible. There are no conflicts of interest.

Second, Morningstar uses a comprehensive net present value (NPV) technique for valuation. It involves discounting all of the stock’s future cash flows back to the present. When this technique is done right, many investors consider it to be the finest way to value a stock.

That said, they have a fair value estimate for Cummins of $118, the same as the price that I derived in the last step.

And just as I did earlier, they place Cummins in their fair value range (3 stars), even though they compute Cummins’ fair price to be about 9% higher than the stock’s actual market price. 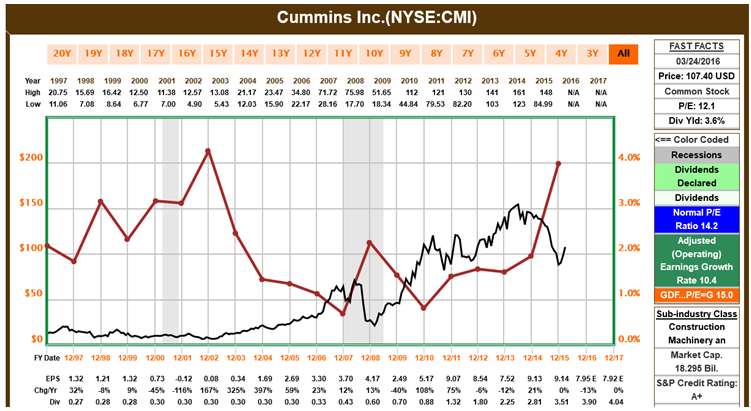 According to Morningstar, Cummins’ average yield over the past 5 years has been 2.1%. It is 3.6% now. That is a favorable comparison, suggesting that Cummins is undervalued.

Since I use 10% as the cutoff between the fair valuation range and undervaluation, let’s call this situation a 15% undervaluation. That suggests a fair price of $126.

Using the 4 approaches just described, our valuation for Cummins looks like this:

I conclude that Cummins is undervalued at the present time. Its current price of about $107 is 14% less than its fair value price of $124.

That is an attractive entry point. I do not own Cummins now, but I intend to study its business in depth and will consider adding it to my own dividend growth portfolios at some future time.

Note that this is not a recommendation to buy Cummins. Always perform your own due diligence on every potential stock purchase. Check out the company’s quality, financial position, and business prospects. Also consider whether it fits into your portfolio and how it might help you meet your long-term investing goals.