As you may recall, in January I outlined “factors” that have been found to correlate with higher stock returns over the long term. I stated that I would use those factors to select stocks for this year’s Dividend Growth Stock of the Month series.

So far in 2016, here are the stocks from the list that have been covered as Dividend Growth Stocks of the Month:

This month, we move to another stock on the list. It is the largest retailer in the world: Wal-Mart (WMT).

Wal-Mart has been a mainstay in many dividend growth portfolios for years. But does it deserve that status? Let’s find out.

This is a spotty resume. While WMT is a Dividend Champion that has increased its dividend for 43 consecutive years, its recent increases have been only around 2%.

The worst part of this resume is the declining trend in dividend increase percentage. Here are WMT’s dividend growth rates from 10 years down to 1 year. 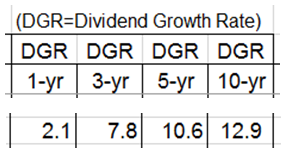 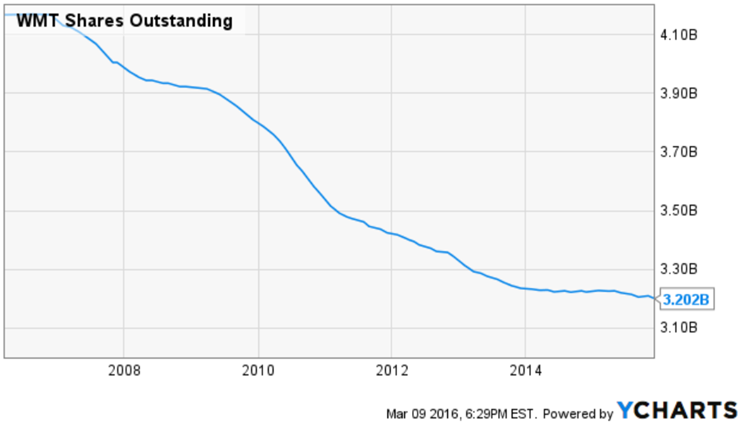 This is a very good share count record, amounting to about a 22% reduction in the past 10 years. Declining share counts generally help investors over time.

However, note that the count has not moved down significantly in the past 2 years. Similar to the slowdown in dividend growth, the slowdown in share count reduction suggests that the company is conserving cash in both programs (dividends and share buybacks) over the past couple of years.

What’s the Story on Wal-Mart? How Does It Make Money?

Wal-Mart is the largest retailer in the world. It has > 11,000 stores world-wide and pulls in >$485 billion in annual revenue. WMT is a general retailer, with major portions of sales coming from products as disparate as groceries, entertainment, hard goods, apparel, and home products.

The company has three divisions:

WMT attracts >100 million store shoppers every day. Wal-Mart’s U.S. division is the largest supermarket operator in the USA, with >30% market share. The supermarket operation accounts for about 50% of WMT’s total revenue.

It attempts to purchase goods for less, operate efficiently, and offer everyday low prices to its customers.

The empire was built on those principles.

Historically, Wal-Mart scaled up by “moving into” local markets, then convincing consumers that it offered convenient one-stop shopping with inexpensive products.

Customers had no switching costs themselves.

In recent years, Wal-Mart has been challenged by competitors also offering low prices and convenience: dollar stores and Amazon. WMT has found itself behind the curve in e-commerce.

In its most recent annual report, Wal-Mart gave this view of its strategy:

Our customer proposition is focused on four areas – price, access, assortment,
and experience. Each dimension is important, and we take a holistic view to how they integrate with each other. 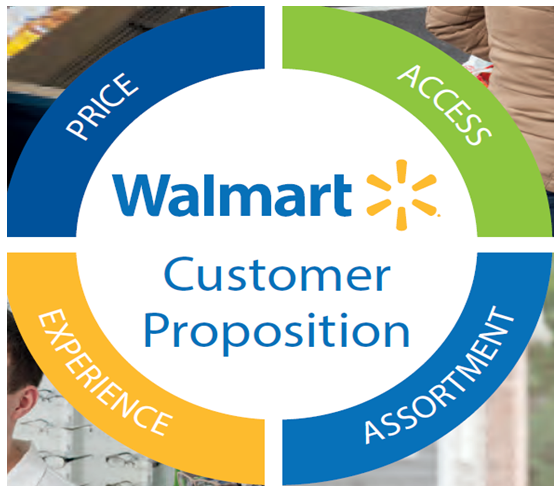 Here is what they say about each of those 4 elements:

Price. We serve value conscious customers, regardless of household income, all over the world. So, we’ll always be aggressive on price. [Everyday Low Pricing] builds customer trust, both in stores and online….To deliver price leadership, we continue to focus on driving everyday low cost through improvements in supply chain, processes and other efficiencies.

Access: Through our more than 11,000 stores, websites and mobile apps, customers can access Walmart in more ways than ever before …. But the future of retail is not just in-store or online – it’s putting the two together in new ways….We’ll continue to test and learn as we explore options for convenient merchandise pickup or delivery to save customers’ time.

Assortment: Customers want more merchandise choices, and they expect to find almost anything when shopping Walmart. In our stores, we’re focused on providing quality merchandise, desirable national brands and great private brand options. On the e-commerce front, we provide those same things through an expanded assortment of approximately 8 million items on walmart.com in the U.S. Interestingly, 75 percent of walmart.com sales come from non-store inventory, thus providing incremental sales growth beyond our stores.

Customer experience: Retail has always been a people business, and we win when associates exceed customer expectations. That’s why we’re investing in higher wages and increased training and development for our U.S. associates. We’ll also equip them with information and technology to facilitate great customer service. We’re focused on running great stores and websites by improving in-stock and driving a faster checkout, both online and in stores.

To my ear, these are ambitious plans, filled with challenges for an organization the scale of Wal-Mart.

Morningstar awards Wal-Mart a wide moat rating, which is its highest designation for a company’s competitive strengths. Their reasoning is that Wal-Mart has significant cost advantages stemming from its volume purchasing power and huge scale. The company uses its size and leverage to extract favorable terms from suppliers, vendors, and manufacturers. In addition, suppliers must tie into Wal-Mart’s just-in-time inventory and logistics systems.

Wal-Mart has been a low-price leader for so long that its name itself is a significant asset. The brand is automatically associated with everyday low prices. Of course, many customers also associate the brand with a low quality shopping experience.

As well established as Wal-Mart is, it faces risks and challenges. Examples would be:

• Continuing sluggish growth in consumer income
• Ramped-up competition from competitors that may be willing to slash their own margins to gain market share
• Higher labor costs
• Foreign exchange rates that can provide headwinds for overseas sales
• Amazon and other digital retailers; there are those who believe that e-commerce is slowly changing how the world shops

The red flags in the table concern WMT’s earnings growth. Here is how Morningstar depicts EPS growth for the past 10 years.

The year-over-year figures are jumpy, but the 3-year average figures show a clear trend downward from a peak in 2011. This helps explain why WMT has slowed its rates of share buybacks and dividend growth in the past couple of years. It simply has had less money to work with.

At least it is good to see that the company has not been taking on increasing debt. Its balance sheet is solid.

Looking forward, analysts estimate EPS growth of only 0.5% per year for the next 3-5 years. Clearly, Wal-Mart has its work cut out in attempting to restore a healthier financial record and earnings outlook.

Step 1: FASTGraphs Default. The first step is to compare the stock’s current price to FASTGraphs’ default estimate of its fair value, shown by the orange line on this graph. 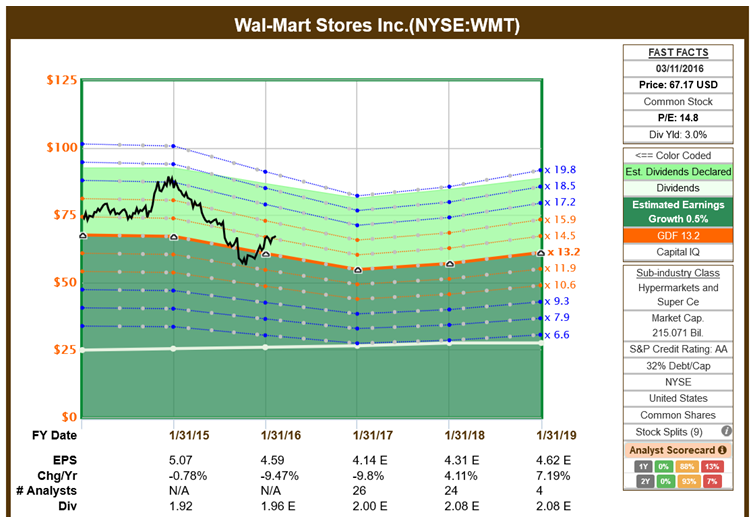 In this case, FASTGraphs uses a default valuation of 13.2 P/E instead of the usual 15. That is a reflection of WMT’s low earnings growth rate over the past few years and the low projected rate looking forward.

Because of this lower “intrinsic” valuation, WMT looks overpriced even though its P/E is 14.8. The margin of overpricing is 12%. I usually consider 10% to be the dividing line between fairly priced and overpriced.

Step 2: FASTGraphs Normalized. The second valuation step is to compare WMT’s price to its long-term average P/E ratio. This lets us adjust for the fact that some stocks always seem to have a high valuation, while others always have a low valuation. 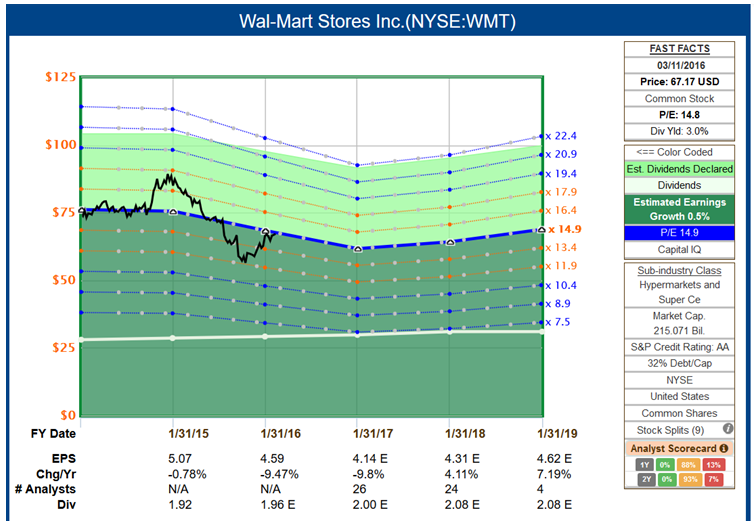 Thus by this measure, WMT is fairly valued at the moment.

Step 3: Morningstar Star Rating. Morningstar uses a comprehensive net present value (NPV) technique for valuation. Many investors consider this to be a superior method to using P/E ratios as we just did with FASTGraphs.

On Morningstar’s 5-star system, Wal-Mart gets 4 stars. That means that they believe the company is undervalued. They assign a fair value of $75 to the shares, which is a premium of about 12% to the stock’s current selling price. 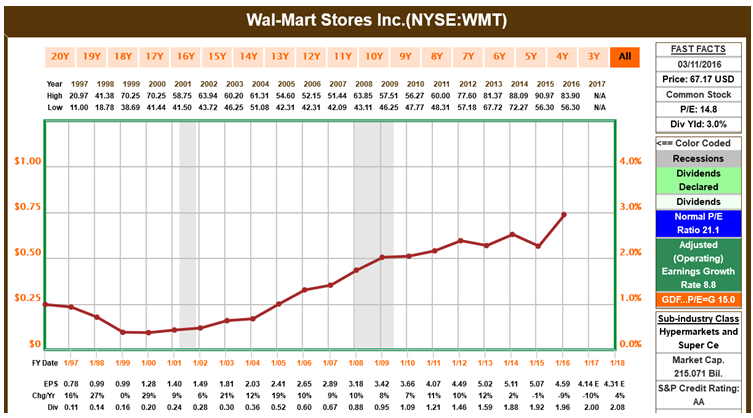 As you can see, Wal-Mart is currently yielding more than it ever has. Despite the low dividend increases for the past couple of years, the stock has never been available at a 3% yield before.

Morningstar calculates WMT’s average dividend yield over the past 5 years as 2.5%, so at 3% current yield, I would estimate that WMT is 20% undervalued by this valuation method.

Using the 4 approaches just described, our valuation summary for Wal-Mart looks like this:

WMT’s beta of 0.5 (measured over the past 5 years) indicates a stock price that generally moves only half as much as the overall market. That makes it a pretty easy stock to not worry about most of the time.

The analysts’ recommendations are from S&P Capital IQ. Their most recent report on WMT shows the opinions of 33 analysts. Their average recommendation is 3.2 on a 5-point scale, which means “Hold.”

• Declining dividend growth trend over past 10 years, with two most recent increases (including this year’s) at only about 2%.
• Enormous size of company makes turning it in new directions hard.
• Is way behind in e-commerce. Ramping up that distribution channel will require significant investments and acquisition of new corporate skills.
• Increases in e-commerce sales could come at the expense of in-store sales. It is too soon to tell.
• Poor EPS growth in the recent past and projections are not much better.

My bottom line is that this has been and remains a great company, but that it faces genuine business challenges going forward. Those challenges will require investments (e-commerce) and maybe higher operating costs, which could negatively impact its margins.

If you already own it, I would hold it. I do not own Wal-Mart myself.

If you are looking to buy more, I would probably wait and see whether it can be obtained with a larger margin of safety.