As you may recall, in January I outlined a set of “factors” that have been found to correlate with higher stock returns over the long term. I stated that my intent was to use those factors to select stocks that we will cover this year in the Dividend Growth Stock of the Month series.

So this month, let’s move down one spot to PepsiCo (PEP).

In disclosure, PepsiCo was a charter member of my Dividend Growth Portfolio. I first purchased shares in 2007, and I have held them ever since.

Pepsi’s dividend resume is very good. The only weak spots are the low-ish yield of 2.9% and the fairly high EPS payout ratio of 83%.

Every other statistic is Good or Excellent:

• With its 2016 increase announcement made on February 10, Pepsi has raised its dividend for 44 consecutive years. That puts it in rare company.
• The increase just announced is 7.1%, last year’s was 7.3%, and the 5-year average has been 8.2%. The company’s increases have shown no pattern of reduction or weakening.
• PEP has been reducing its share count for the past 10 years. 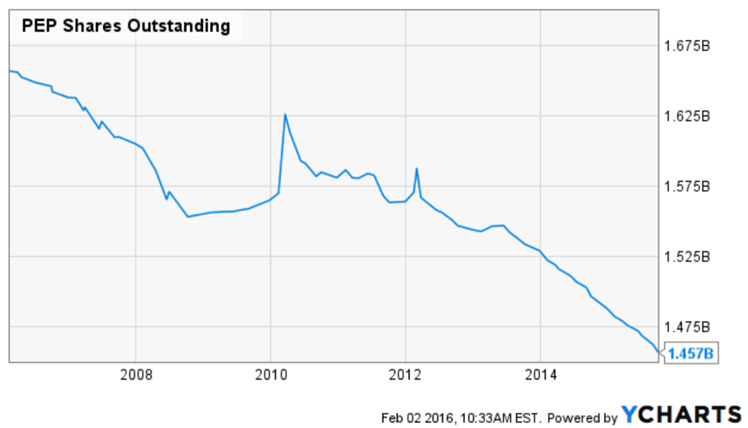 That’s about a 12% reduction in the past 10 years. A steadily declining share count is helpful to the dividend growth investor on several levels.

• It reflects a company with solid financials, creating enough cash to lower its share count while increasing its dividend.
• It means that each share represents a higher percentage ownership of the whole company.
• The dividend pool is spread over fewer shares each year, so the money goes farther for each remaining share.

PepsiCo’s dividend safety rating from Safety Net Pro is A. That means that they consider the dividend to be extremely safe, with almost no chance of being cut.

How Does Pepsi Make Money?

PepsiCo is a leading global food and beverage company. Its brands are well-known and respected throughout the world.

[ad#Google Adsense 336×280-IA]While the company traces its roots back into the 19th century, the modern PepsiCo was founded in 1965 when Pepsi-Cola and Frito-Lay were merged.

The original Pepsi-Cola company was established in the late 1890s, while the Frito and Lay companies were both founded in 1932.

PepsiCo manufactures, markets, and sells a wide variety of carbonated and non-carbonated beverages, as well as salty, sweet, and grain-based snacks.

The company owns most of its bottling infrastructure in North America, having purchased the bottlers in 2010.

You have probably read that carbonated soft drinks are dropping off in popularity, but Pepsi has a variety of non-carbonated offerings, including Gatorade sports drinks, Tropicana juices, and Aquafina water.

You have probably also read about the “cola wars” between Pepsi and Coca-Cola. Those are fun, but in Pepsi’s case, beverages account for just half of its revenues. The company does not need to win the cola wars to be a successful company.

• Strong collection of brands, many of which can be and have been extended into related products. Pepsi has 22 brands that each bring in more than $1 billion in sales each year.
• Strong brand awareness supported by extensive advertising and marketing. Strong brands confer pricing power, and in many cases they help Pepsi to dominate market share in particular categories.
• Huge size allows economies of scale.
• Ownership of its bottling and distribution network in the USA allows quicker product rollouts, experimentation with product packaging, and short-run product tests. See this article for more insight into why Pepsi bought its bottlers.
• Strong relationships with major retailers and a well-established distribution network that takes products from production at the front end and places them directly into stores at the back end.
• Synergies and diversification from its food, snack, and beverage lines. Many beverages and snacks are complementary, leading to overlapping store displays and cross-marketing opportunities.

As an example of the importance PEP’s snack businesses, it holds about 64% of the domestic salty snack market, 60% in Brazil, and 46% in the UK. The Americas snack businesses are Pepsi’s most profitable segments. They generate about 38% of total revenue but 58% of operating profits.

Of course, all is not perfect. Pepsi faces risks like these:

• The strong US dollar creates headwinds when international sales are translated back to our own currency.
• Shifting consumer preferences, particularly the shift towards toward juice, water, and other noncarbonated beverages, can lead to declining rates of volume growth on the beverage side.
• Mexico instituted a tax in 2014 on sugary drinks. That has harmed volume there, and it may be a harbinger of similar government regulations elsewhere.
• Pepsi’s largest international source of business is Russia, meaning that there is always geopolitical and currency-related risk from that country.

PepsiCo has two red categories, so let’s address them first. PEP carries a high amount of debt. Its debt/equity (D/E) ratio is 2.0, meaning that it carries twice as much debt as all of its stock is worth. While it is not unusual to see companies with D/E ratios above 1.0, a ratio of 2.0 is unusually high.

Not only that, Pepsi’s debt ratio has been rising for the past decade. This depiction is from Morningstar:

Notice how PEP’s D/E ratio has risen practically every year, from a mere 0.16 at the end of 2005 to its current 1.96 as of the most recent quarter.

The high level of debt is one of the reasons that PEP’s Return on Equity (ROE) is so good. In the equation for ROE, the return rises as leverage goes up. That’s the good news. The bad news is that the level of debt is so high, which brings with it an interest-expense overhang.

Wall St. analysts project Pepsi’s EPS for the next 3-5 years at 6% per year. That’s a decent growth rate for a huge mature company like Pepsi. 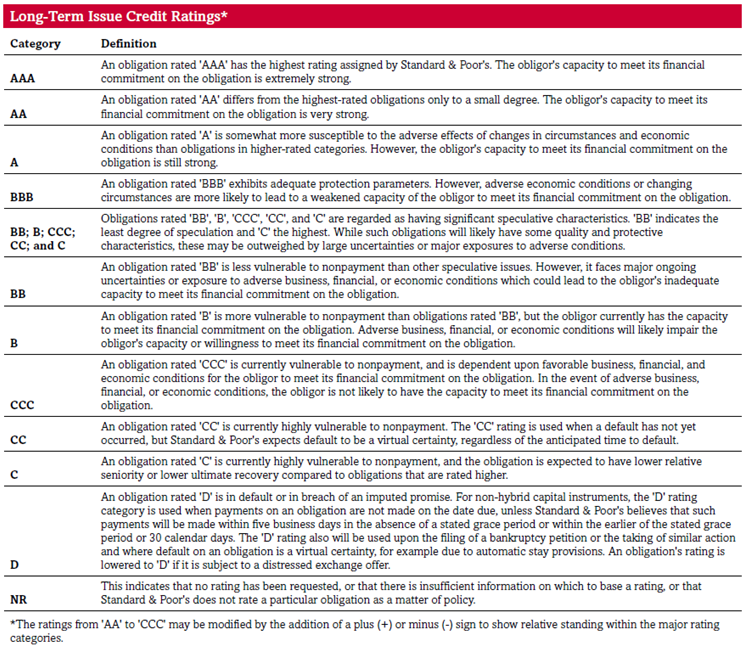 Step 1: FASTGraphs Default. The first step is to compare the stock’s current price to FASTGraphs’ default estimate of its fair value. The default estimate is based on a price-to-earnings ratio (P/E) of 15, shown by the orange line on the graph and the scale on the right. 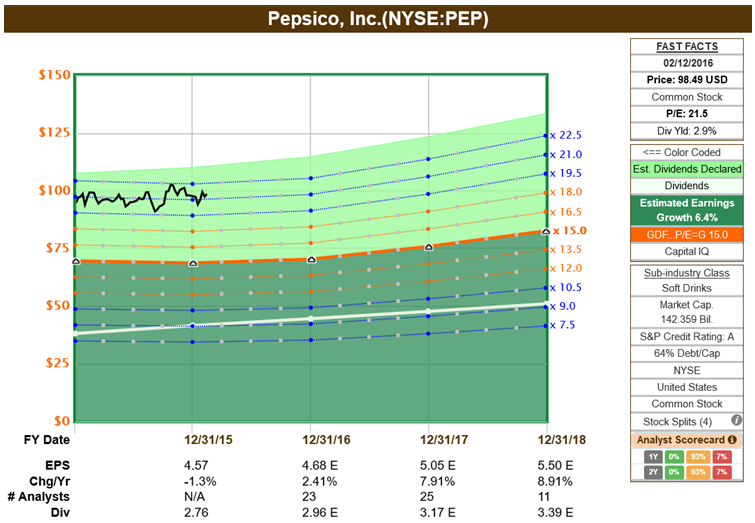 By this first method of appraising valuation, PEP is vasty overpriced. Pepsi’s actual price (the black line) is way above its fair value when calculated by this method. At an actual P/E of 21.5, the company would be considered overvalued by 43%. That is not a good valuation for potential buyers.

But we use other steps in appraising valuation. Let’s look at them.

Step 2: FASTGraphs Normalized. The second valuation step is to compare PEP’s price to its long-term average P/E ratio. This lets us adjust for the fact that some stocks, under the “wisdom of the market,” always have a high valuation, while others always have a low valuation. 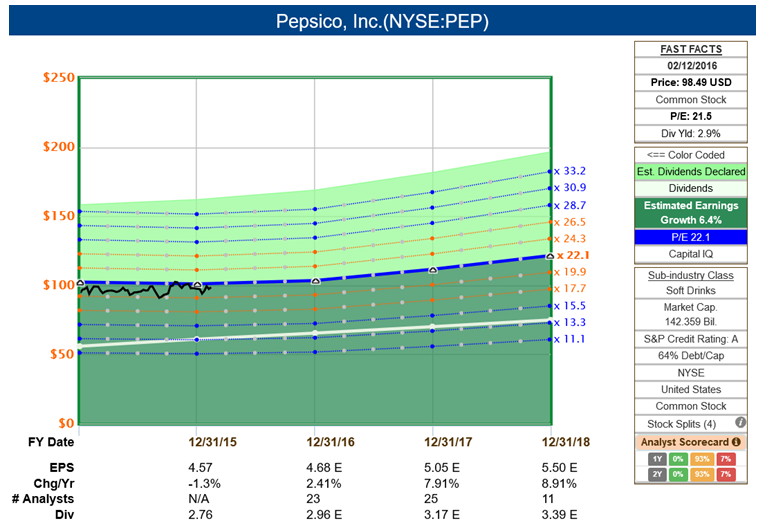 This changes the picture considerably. That is because PEP’s average valuation over the past 18 years has been P/E = 22.1, which is actually a tad higher than its current valuation of 21.5. Pepsi is one of those dompanies that seems perpetually to be overvalued.

Thus by this second method, PEP’s price is fair.

On Morningstar’s 5-star system, PEP gets 3 stars. That means that they believe the company is fairly valued. They assign a fair value of $99 to the shares, almost identical to its current price.

Step 4: Current Yield vs. Historical Yield.
Finally, we compare the stock’s current yield to its historical yield. It is better to be near the top of that range than the bottom. 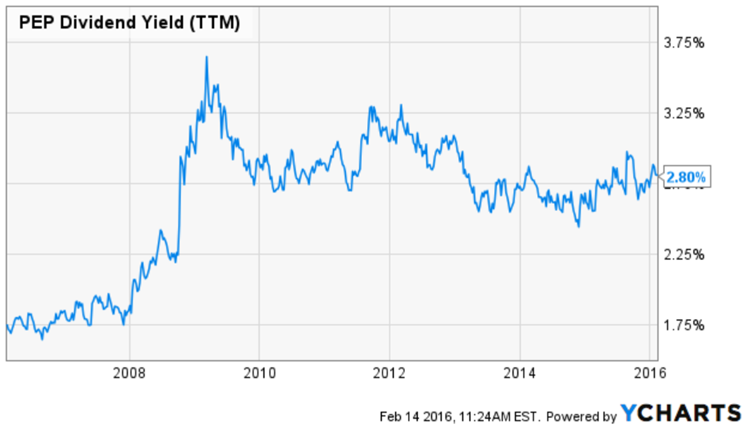 As you can see, Pepsi’s current yield is about equal to its long-term average. Morningstar shows its 5-year average yield as 2.9%, which is the stock’s yield right now.

So by this method, PEP is fairly valued.

Using the 4 approaches just described, our valuation summary for PepsiCo looks like this:

Pepsi’s beta of 0.5 (measured oveer the past 5 years) indicates a stock price that generally moves only half as much as the overall market. That makes it a pretty easy stock to not worry about most of the time.

I get the analysts’ recommendations from S&P Capital IQ. Their most recent report on PEP shows the opinions of 27 analysts. Their average recommendation is 4.0 on a 5-point scale, which means “Buy.”

• Excellent dividend resume, including 44 straight years of increases, clouded only by its 83% payout ratio.
• Declining number of shares makes each remaining share worth a higher percentage of the company.
• Very good wide-moat business model balanced between beverages and snacks/foods, with a world-class distribution system and many valuable brands at its foundation.
• Very good financials with the exception of high debt load. Credit rating = A.
• Low beta.

Pepsi’s valuation is neutral. Its only real negative is its high debt load.

My bottom line is that this is a great company, but that this an OK but not great entry time for Pepsi.

If you already own it, I would hold it, which is exactly what I am doing.

If you are looking to buy more, I would probably play a waiting game and see if you can pick it up at a better valuation with a slightly higher yield. Of course, sometimes prices “never” come back to where you want them. That is a risk you take by not buying a quality company at a fair valuation.

Long term, this is a stock that you can expect to own for a long time.