Earlier this year, I outlined a set of “factors” that have been found to correlate with higher stock returns over time. I said that we would use those factors to select some of the stocks that we will cover this year in the Dividend Growth Stock of the Month series.

The first stock for 2016 is the very first stock on the list. It is the largest energy company in the world: ExxonMobil (XOM). This is not a stock that I own, so I am as interested in the results of this analysis as anybody!

Exxon’s dividend resume is pretty good, although the recent downward trend in dividend increases may be worrisome.

As you probably know, practically every company in the oil industry has been hammered over the past year as a result of soft oil prices. Exxon is no exception. Its falling price has resulted in a rising dividend yield, as the two metrics move opposite to each other. They look like mirror images in this chart. 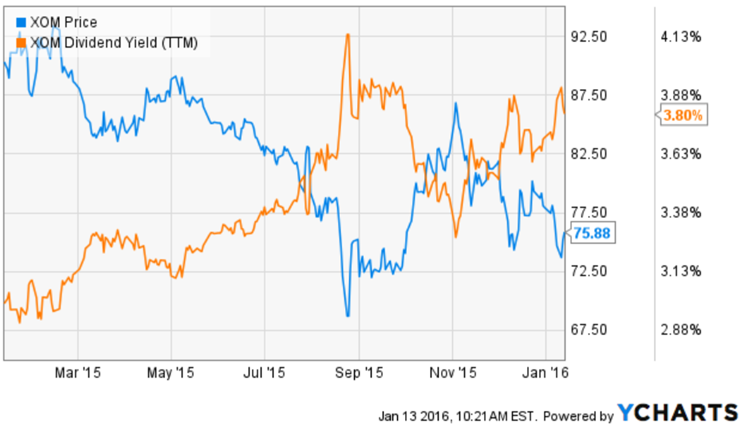 Exxon has lived through declining oil prices before, yet for 33 years it has increased its dividend every year. The company’s sheer scale and conservative approach to financing gives it a financial foundation that few companies can match.

That said, XOM’s rate of dividend increases has been falling a little each year for the past several years. The following table shows each year’s percentage increase:

You can see that the percentage increase each year since 2012 has gone down, from 17.8% to 12.8% to 9.8% to 6.7% last year. That kind of slowdown is never a good sign, although remember that we are talking about slower growth in the dividend, not actual dividend cuts. You can see that in earlier years, XOM’s dividend increases moved up and down as the company’s business fortunes changed from year to year.

XOM’s free cash flow has been erratic. When 2015’s numbers are in, we can expect to see another decrease, given recent downward values in the price of oil.

Cash flow comes from two main sources: Operations (dark blue on the chart below) and financing activities (lighter shades of blue). Exxon’s cash from operations during the first nine months of 2015 was sufficient to fund its dividends and share repurchases (dark green). 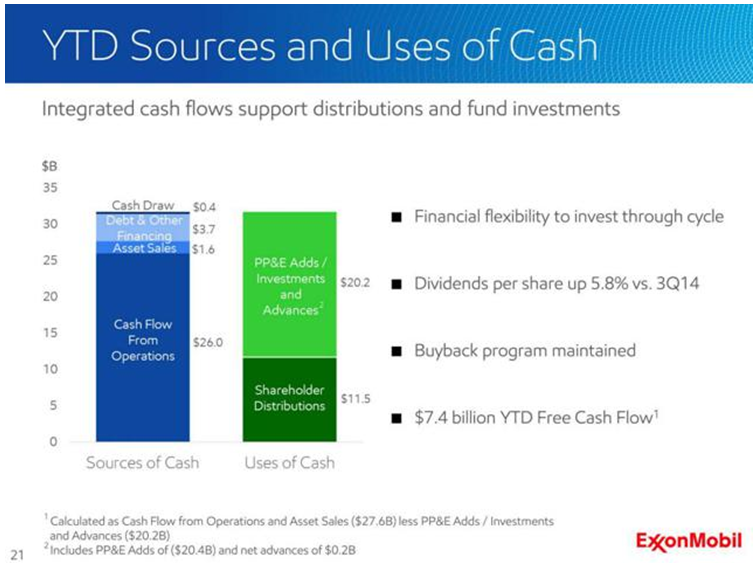 Another part of the dividend equation is shares outstanding: Is the “float” (total shares) steady, rising, or declining? 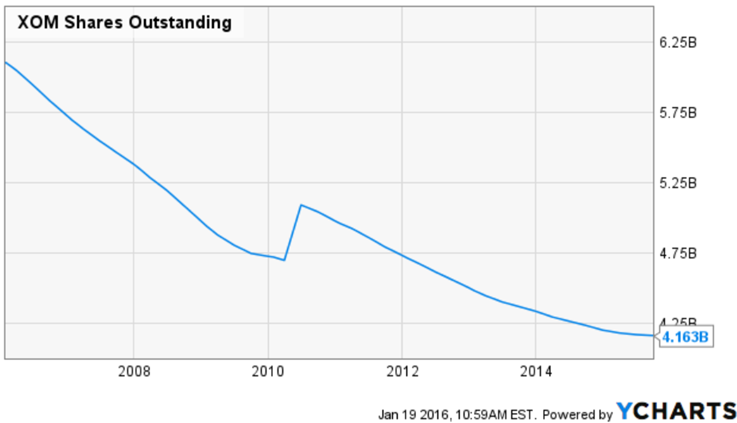 As you can see, XOM has been repurchasing shares significantly for the past 10 years. This is good on several levels. First, it reflects a company with solid financials. Second, it means that each share represents a higher percentage ownership of the whole company. Finally, the dividend pool is spread over fewer and fewer shares each year, so it goes farther.

A company with declining share count can increase the dividend without actually spending more money on it. Exxon has been able to pay increasing dividends partly because of the share repurchases.

Our objective is to pay a reliable and growing dividend, directly sharing the corporation’s success with our shareholders. Quarterly dividends per share of $0.73 are up 5.8% versus the third quarter of 2014.

We have also maintained the share buyback program, but have prudently tapered it over the past nine months, consistent with changes in the business environment and the corporation’s cash requirements.

Overall, I would characterize Exxon’s dividend safety as “Neutral.” I balance XOM’s best-in-class financials, operating acumen, and fortress balance sheet against the reality that ultimately, the company’s continuing fortunes require the price of oil to rise above current levels.

As with dividend growth itself, a couple of these metrics have downward trends: Return on equity (ROE) and EPS (Earnings per share) growth rates have been declining since 2012, and both are worrisome.

But of course those estimates, made by Wall Street analysts, are based on presumptions that they made about the price of oil.

XOM has a fortress balance sheet.

The company is not buried under a mountain of debt.

In fact XOM operates with very low debt, and despite the challenges of the past few years, it has barely increased its debt.

The company is one of only three with an AAA credit rating. (The other two are Johnson & Johnson (JNJ) and Microsoft (MSFT).)

Obviously, the key to XOM over the next few years is the price of oil, which the company cannot control. Oil is a commodity, and companies have little pricing power over it. Price is a result of overall supply and demand across the world. The only way that companies can affect that is by cutting back production.

This graph shows the price of oil over the past 30 years. 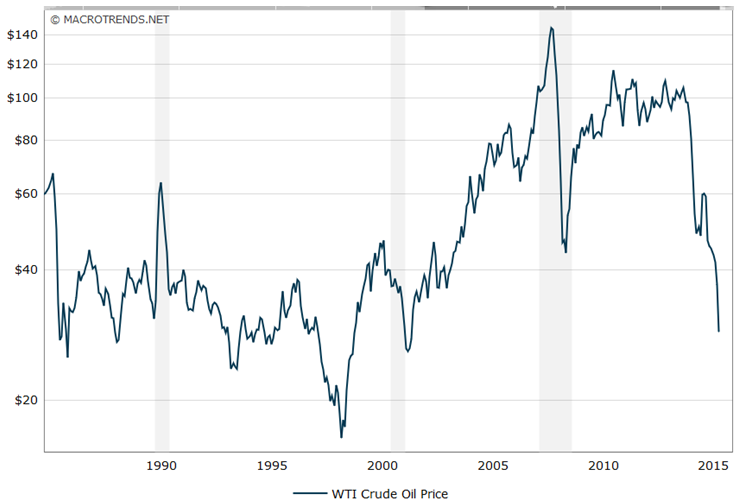 As you can see, the price of oil hit a historic high at the beginning of the Great Recession in 2008, then dropped, rose and plateaued for a couple of years, and most recently has been in free-fall to the $30/barrel range that we have today.

To me, the important learning from this chart is that there is no “set price” for oil. While some people see $100 per barrel as a sort of benchmark, the actual price has been below $40 for about half of the last 30 years. Anyone who states that they know what the price of oil will be a year from now, or who says that oil “has to rebound,” is merely guessing. The truth is, oil’s price is always speculative. That’s why fortunes have been made, lost, remade, and lost again in the oil patch.

It is important to spotlight XOM’s debt-free position. That (along with its AAA credit rating) make XOM a unique company. It is best positioned among all of its peers to weather periods of weak oil prices.

Here is what they said at their third-quarter conference call:

ExxonMobil generated earnings of $4.2 billion in the third quarter. We maintain a relentless focus on our business fundamentals, including cost management, regardless of the commodity price cycle. Despite the challenging environment, the corporation also continues to deliver on its investment and operating commitments.

Third quarter results reflect cyclical strength in our downstream and chemicals segments and highlight the resilience of our integrated business model. The corporation’s integrated cash flows underpin our dividend and enable investment through the cycle to grow shareholder value. Year to date, the corporation generated cash flow from operations and asset sales of $27.6 billion, with positive free cash flow of $7.4 billion, even amid sharply lower commodity prices.

How Does ExxonMobil Make Money?

ExxonMobil is the world’s largest publicly traded energy company, twice the size of Chevron (CVX). XOM was formed in 1999 from a merger between Exxon and Mobil.

The company’s business lines include:

At the end of 2014, XOM had an ownership interest in 30 refineries spread throughout the world, and it sells in over 200 countries through > 19,000 retail service stations under the Exxon, Esso, and Mobil brand names.

XOM maintains the largest portfolio of proved reserves and production in North America, and it is the biggest net producer of oil and gas in Europe. ExxonMobil is widely considered to be the best-run and “safest” stock in energy, although obviously that is a relative term, as the finances of the company are extremely dependent on the price of oil.

Exxon illustrates the advantages of having downstream assets integrated into the whole company. The most recent earnings report showed that downstream earnings increased by $1 billion year over year. This helped to counteract the decline in upstream earnings of $5.1 billion.

Step 1: FASTGraphs Default. The first step is to compare the stock’s current price to FASTGraphs’ default estimate of its fair value. The default estimate is based on a price-to-earnings ratio (P/E) of 15, shown by the orange line on the graph. 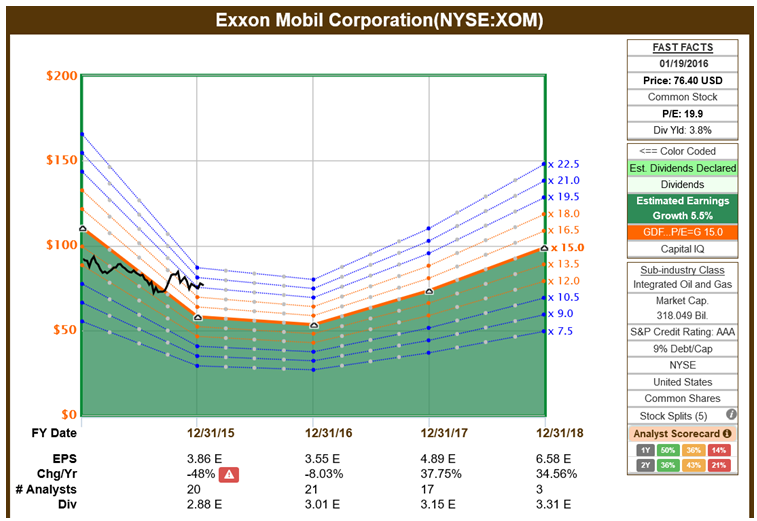 As you can see, XOM’s actual price (the black line) is way above its fair value when calculated by this method. At an actual P/E of 19.9, the company would be considered overvalued by 33%. That is not a good valuation for potential buyers.

Step 2: FASTGraphs Normalized. The second valuation step is to compare XOM’s price to its long-term average P/E ratio. Using the longest term available on FASTGraphs (18 years), this improves the picture, but only slightly. That is because XOM’s average valuation has been P/E = 15.2, which is nearly identical to the default valuation used above. 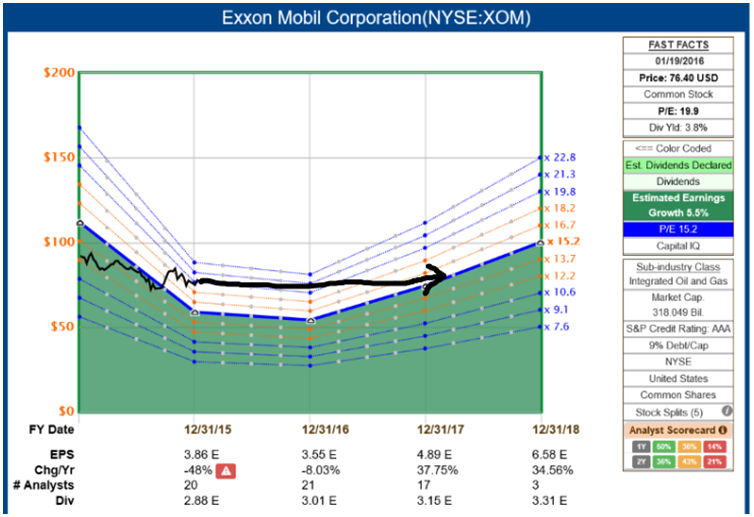 Morningstar uses a comprehensive net present value (NPV) technique for valuation. Many investors consider this approach to be superior to using P/E ratios as we just did with FASTGraphs.

Now we get a different picture. On Morningstar’s 5-star system, XOM gets 4 stars, meaning that they believe that the company is undervalued. They assign a fair value of $87 to the shares, compared to a recent price of $74. That makes them 15% undervalued. 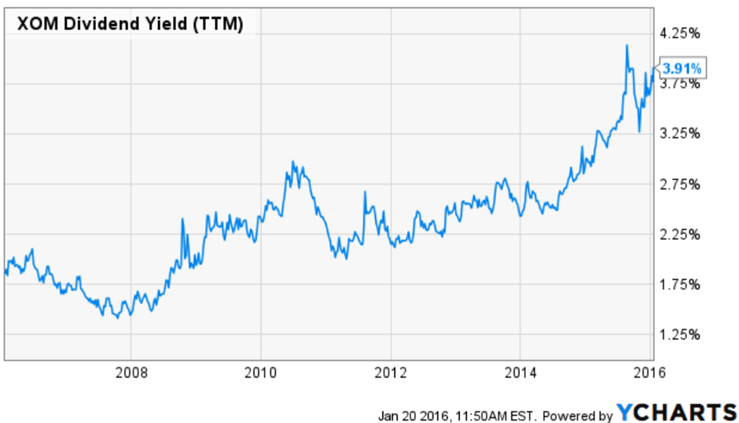 As you can see, Exxon’s yield is practically the highest that it has been in the past 10 years. That makes it very undervalued by this approach.

Using the 4 approaches just described, our valuation summary for XOM looks like this:

Obviously, the 4 valuation methods are all over the map. This is a reflection of the unknowability of the future price of oil.

Exxon’s beta of 0.9 (measured over the past 5 years) indicates a stock price that generally moves with the market, with about the same level of variability. Of course, recently its price has been more variable than the market, and it has had much more of a downward trend, because XOM’s price has been so reactive to the price of oil. 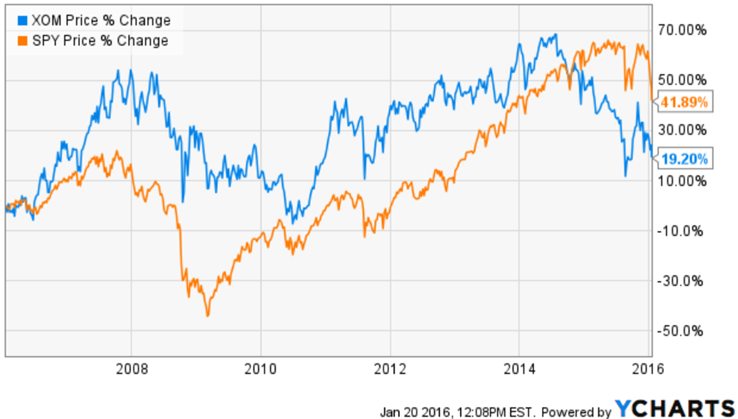 The second miscellaneous factor is analysts’ recommendations. I get this information from S&P Capital IQ. Their most recent report on XOM shows the following:

But look at the spread of ratings. While 5 analysts think XOM is a Buy, 3 think it is a sell. One registered no opinion at all. Again, I think this reflects the confusing situation regarding XOM, the tension between its high quality as a company countered by its obvious dependence on the price of oil. Rarely do you see this kind of spectrum of opinions.

• Ultimately, it cannot free itself from the price of oil.
• Declining dividend growth rate for past 4 years.
• Hard to value; my approach says it is slightly overvalued.

So, while ExxonMobil is a terrific company, now may not be the time to buy it. With regard to both its dividend and its price, you are essentially making a bet on the future price of oil, which frankly no one can know. Nevertheless, its historically high yield on top of its high quality makes it very tempting to buy, if you have any confidence in the notion that the price of oil will rebound.