In September, I wrote about Kinder Morgan (KMI) as the Dividend Growth Stock of the Month.

Last week, I sold my shares.

Kinder Morgan used three sources of money for financing its own growth:

But over the past few weeks, a storm of bad news hit the company and, in effect, cut off one of the legs of its approach to financing its own growth.

Here is the bad news that hit Kinder Morgan.

First, the continued low level in the price of crude oil, which theoretically should not have affected a pipeline company like KMI, has engulfed the stock of practically every company in the energy sector.

Even though KMI makes most of its money from shipping and moving oil, not from selling it, its stock price, along with that of most companies in the oil field, fell steadily throughout the year. 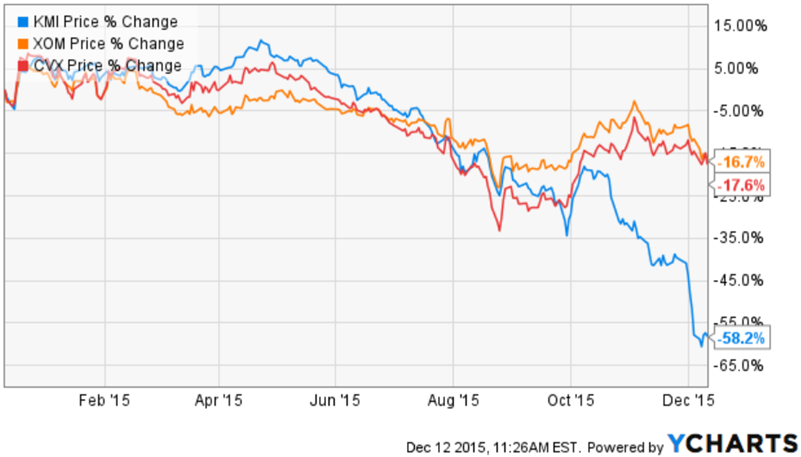 In this chart, XOM is ExxonMobil, and CVX is Chevron (which I own). You can see that through September, the price declines of all 3 companies were almost identical. Indeed, it was partly KMI’s price decline that made its stock seem attractive on a valuation basis when I wrote the article about Kinder Morgan in September.

But the price drop in KMI also had a downside: Because another leg of KMI’s stool was to periodically issue new shares to raise capital – known as equity financing. The decreasing price of its KMI’s shares meant that each issuance generated less and less capital for the company to finance growth. 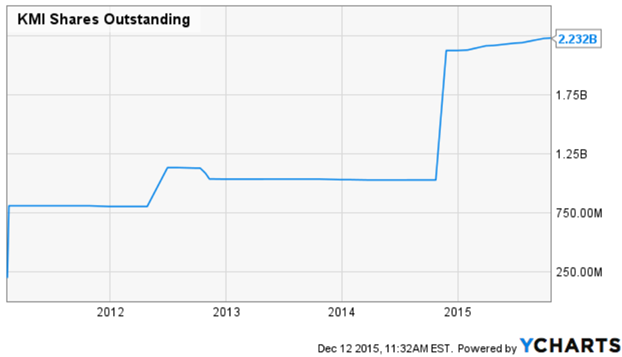 That effectively sawed off the equity financing leg of KMI’s stool.

This is how Moody’s explained its reasoning:

On November 30, KMI announced an agreement to increase its ownership in Natural Gas Pipeline Company of America LLC (NGPL)… to 50% from 20% for approximately $136 million….The [new] negative outlook reflects Kinder Morgan’s increased business risk profile and additional pressure on its already high leverage that will result from its agreement to increase ownership in NGPL, a distressed company….NGPL is facing potential default on its pending interest payments, suggesting that KMI will need to provide cash injections.

The other two credit rating agencies – S&P and Fitch – did not lower their ratings or their outlooks on KMI.

Nevertheless, Moody’s action spooked shareholders and placed the stock’s price under even more pressure than it already was.

KMI’s ability to raise equity capital kept getting worse as its stock price plunged, meaning it would need to finance its activities more from debt.

But the possibility of a credit downgrade meant that debt would cost more: KMI would need to pay higher interest rates to borrow money.

Even though KMI’s underlying business was still working fine, the company recognized that it had to insure that its credit rating did not fall below investment grade.

A lowering in its actual credit rating would weaken, if not saw off, a second leg of its stool, and the company could not let that happen.

If the credit rating were lowered, the only viable remaining source for KMI’s growth financing was its own cash flow.

But third, KMI was paying most of its cash flow out as dividends. The company expects to generate just over $5 billion in distributable cash flow next fiscal year. That would be enough to fund the dividend or to substitute for the money it would normally raise by selling stock, but not both.

Something had to give. Kinder Morgan had to choose between curtailing growth or paying the dividend. It chose growth over the dividend.

Within a matter of days, the company announced that it would slash its dividend payout. It cut its dividend by 75%.

As reported in the Wall Street Journal:

Kinder Morgan, the largest pipeline operator in North America, reduced its dividend Tuesday [December 8] by 75%, in a shocking turnabout for a company that remade a staid corner of the energy sector with the promise of ever-rising payouts to shareholders.

The company’s shares have been in free fall since last week, plunging more than 35% to $15.51 after Moody’s Investors Service, the credit rating agency, said its investment grade status was at risk.

…Kinder Morgan, which relies heavily on outside funding, [was forced] to choose between using its cash for growth or to make dividend payments.

Mr. Kean [KMI’s CEO] said Kinder Morgan’s underlying business has been resilient, but energy-infrastructure companies have been “caught up in the contagion” of low oil and gas prices, making it more difficult to pay for new projects. Cutting the dividend “gives us the flexibility to fund our growth” with cash flow from operations, he said.

KMI made what I think is a smart business move, slashing its dividend 75% so that it can use most of its incoming cash to fund its capital budget. The reduced dividend underscores the company’s focus on protecting the balance sheet, maintaining an investment-grade rating, and continuing to grow even during the prolonged energy market downturn.

Shortly after the announcement, Moody’s reinstated its stable outlook, while S&P and Fitch both reaffirmed theirs. All three credit rating companies have KMI at an investment grade rating.

What Did I Do?

KMI’s move was good for the company. It is squarely focused on funding growth projects with internally generated cash flow and paying down debt to maintain its investment-grade rating.
But as a dividend growth investor, KMI’s cut was bad for me. There was really no alternative to deciding to sell my shares.

Unfortunately, KMI’s reduced price (it did rise a few percent after the announcement) meant that I had fewer dollars to spend on replacements. But it had to be done.

Here’s what I did:

That loss is a little under 5% of my annual income. Since that income has been growing at about 10% per year, I should be able to make it up and surpass my former income rate in about 6 months.

The actual dollars to be received in 2015 will not change, because KMI had already paid its final dividend for this calendar year. After all is said and done, the income dollars in 2016 will be about 5% less than I might have expected, but should still be about 5% more than in 2015.

In the long view of things, this is a speed bump. I tend to be philosophical about events like this. No investor bats a thousand. I view the incident as a temporary setback in my long-term journey of dividend growth. The graph of income growth will have a lower slope for a while, but overall the slope will still be rising.

What Did I Learn?

When an investment turns out to have been a mistake, it is not good to dwell on the error or become emotional about it. I never play the blame game.

But it is good to see it as a learning opportunity. The big learning to me was the importance of KMI’s share price to its actual business model. Normally, as a dividend growth investor, I do not pay much attention to share price.

But most companies are not repeatedly entering the equity markets to sell new shares to finance their operations. KMI was doing exactly that, and I failed to understand the importance of the interplay of that factor with share price.

When I have analyzed stocks in the Dividend Growth Stock of the Month series, I have considered the net reduction of shares (many companies have share buyback programs) as a “plus” factor. From now on though, I am going to elevate “shares outstanding” to a primary metric.

KMI’s shares-vs.-price chart looked like this for the past 5 years: 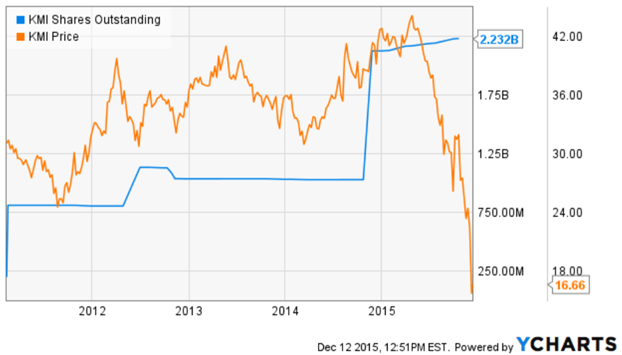 Early in 2015, that combination became untenable as KMI’s stock got swept up in the energy mess caused by falling oil prices. In the future, I will take a harder look at that relationship. What happened to KMI was a perfect storm to be sure, but it actually was foreseeable for several months before the storm hit. The key was that KMI continually returned to the equity markets with new shares as a fundamental way of raising money.

At the end of the month, when I update my Dividend Growth Portfolio, it will reflect the absence of KMI, the new shares of AT&T, and the new dividend growth outlook.