So far in 2015, we have covered these companies and topics in the Dividend Growth Stock of the Month series.

Disclosure: I own every company named in the table except TROW.

This month’s selection is Microsoft (MSFT), which in full disclosure I also own. Once a high-tech rocket ship stock, MSFT has matured into a technology blue chip company. At one time, it would have been hard to picture Microsoft as even paying a dividend. Now it has a 14-year streak of not only paying but increasing its dividend every year.

Let’s check it out.

Microsoft’s dividend resume is very good. The only point of concern is its payout ratio, which at 97% of earnings is high.

[ad#Google Adsense 336×280-IA]But MSFT’s earnings per share in its last fiscal year were severely impacted by a one-time $7.5 billion impairment charge that MSFT reported during its last quarter (ending in June) to write down its acquisition of Nokia’s hardware business in 2014.

That write-off had to be taken, but it did not impair Microsoft’s cash flow.

It was a non-cash charge.

So its next 12 months of dividend payments (about $11.5 Billion) will be about half of its free cash flow.

Viewed that way, MSFT’s dividend payment is quite manageable, and in fact there will be plenty of room for an increase next year and in the years further out. We can be confident that MSFT’s management would not have just increased the dividend 16% if it thought the company was in any sort of cash-flow “jail.”

Microsoft’s yield of 2.7% is at the lower edge of my own minimum for investability. Each dividend growth investor needs to choose the lowest starting yield they will accept. Quite often there is a tradeoff between yield and dividend growth rate (DGR). Microsoft’s DGR is high, in the teens. So MSFT might be called a “medium yield, fast growth” dividend stock.

Yield, of course, varies not only with the amount of the dividend and its growth, but also with the stock’s price. That is because Yield = Dividends / Price.

Price is determined by the market. The company cannot control price. As you can see here, MSFT’s price has been on something of a tear over the past 5 years. 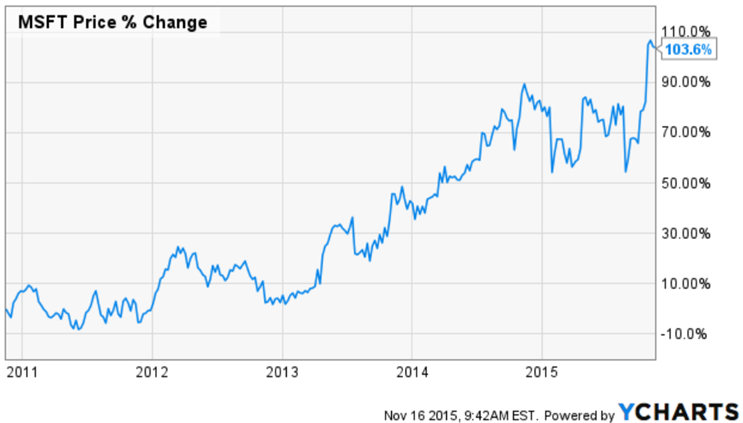 MSFT’s price has doubled over the past 5 years. That is largely responsible for the comparitively low yield. It is certainly not the result of MSFT’s dividend, which has been growing like gangbusters over the same time frame. In fact, the dividend’s growth has outstripped the price’s growth. 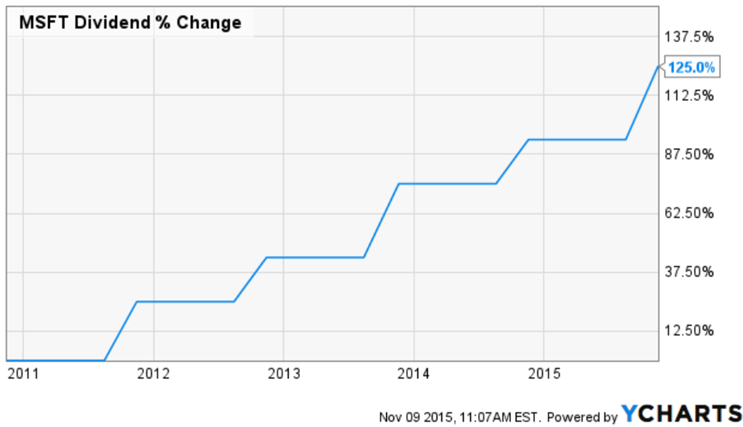 Microsoft just announced its annual increase for 2015: 16%, payable on December 12. That is the most recent jump shown in the chart above.

Overall, this is a very good resume for any company, with one obvious exception: The negative 5-year earnings growth rate. We will discuss that shortly.

Six of the 8 categories grade out as either good or excellent:

• ROE is 15%, and it has been above 14% for each of the past 5 years. As a matter of fact, it has usually been above 20% or even 30% for the past 10 years. ROE is a measure of a company’s efficiency in converting revenue into profits. Anything in the mid-teens or higher is considered to be good performance.
• Debt/Equity (D/E) ratio at 0.5 is way below that of most companies in these days of low interest rates. For comparison, the average D/E ratio for all 745 Dividend Champions, Contenders, and Challengers is 1.2.
• Microsoft’s credit rating is AAA, the highest rating possible. Only 3 U.S. companies have AAA ratings. (The other two are Johnson & Johnson and ExxonMobil.)
• S&P IQ’s Quality rating is A-, which it terms “above average.” It is the 3rd-highest rating available on their scale.
• Morningstar’s Moat rating is “wide,” which is the highest rating on their scale. That means that Morningstar believes that MSFT has significant and sustainable competitive advantages.

There are 2 categories not in green:

First, Microsoft’s projected earnings growth rate is 8% per year. For a company as mature and large as MSFT, this would be a decent rate of growth if they achieve it.

Second, over the past 5 years, MSFT’s earnings growth is negative. But that again is largely the result of the one-time charge for the Nokia write-off. Microsoft’s 2015 fiscal year ended in June, and its earnings per share (EPS) fell to $1.48 from $2.63 the year before. Earnings are expected to bounce back in fiscal 2016. First-quarter 2016 results were announced in October, and they were on that track.

So I do not consider the negative earnings growth rate as anything to be concerned about.

How Does Microsoft Make Money?

Microsoft is the world’s largest software maker. It enjoys a near monopoly in desktop and PC operating systems (Windows) and productivity (Office, which includes Word, Excel, Powerpoint, and Outlook).

Those businesses are strong cash generators. Office in particular is very hard for an enterprise to switch from, given its huge user base and wide acceptance. Microsoft is in the process of moving those businesses from one-time purchase models to subscription models, with the original software and updates coming from the cloud.

As good as they are, MSFT’s flagship products face competition from tablet computers, cloud alternatives, and other methods of getting work done.

Microsoft operates through these segments:

Microsoft got into the physical product tablet/laptop market a couple of years ago with the introduction of Surface. With each new generation, Surfaces have become better productivity tools, not just devices for consuming content and media.

Microsoft has been slowly shifting its forward strategy from being PC-centric to becoming cloud-based services for many devices, including mobile. Their goal is to create seamless user experiences across all devices (PCs, tablets, smartphones, home entertainment consoles). While the forward strategy certainly points toward potent growth areas, their margins are not going to be as good as in the established Windows and Office businesses.

The company closed its fiscal 2015 (ending in June) with $97 billion in cash and short-term investments, compared to debt of just $35 billion. This is a “fortress balance sheet” that gives the company substantial financial flexibility. 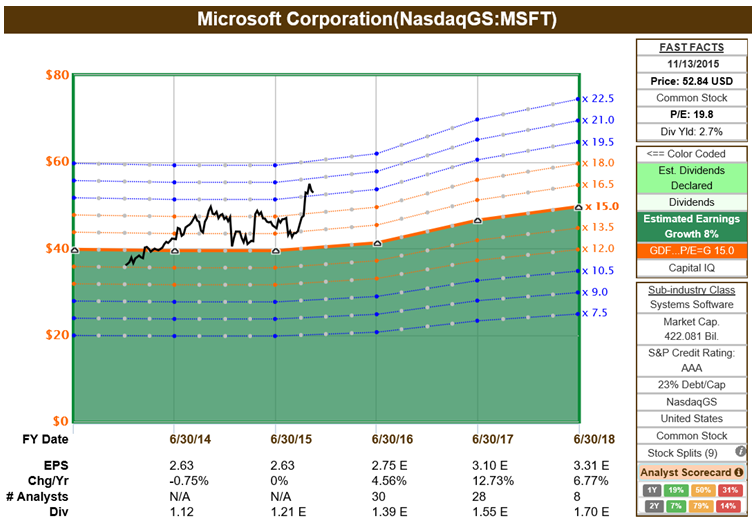 As you can see, MSFT’s actual price (the black line) is way above its fair value when calculated by this method. At an actual P/E of 19.8, the company would be considered overvalued by 32%. That is not a good valuation for potential buyers. 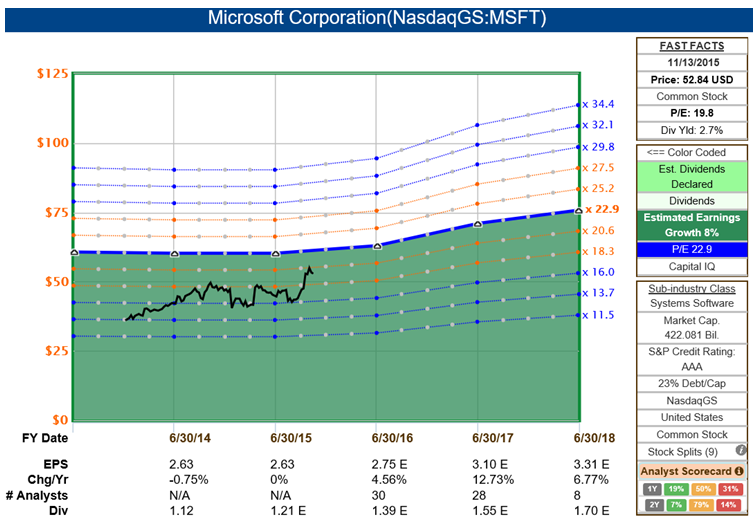 However, the 18-year span covers a transition period for Microsoft. The period begins when the technology bubble was inflating (1997) and includes the technology crash of 2000-2003. If you look at MSFT’s average P/E ratio year-by-year, you would see that it declined every year until about 5 years ago, when it bottomed out at 12.7. Since then it has been slowly going back up.

Taking all of this into account, I reckon that a good median P/E ratio for MSFT is around 15, which is the same as the default choice used in Step 1. Therefore, under this second method, I must again rate MSFT as overvalued, rather than undervalued as suggested by using the 18-year average P/E. I believe that the stock was overinflated during the tech boom at the end of the 1990’s, and that it would not be prudent to include those inflated values in the calculation.

Step 3: Morningstar Star Rating.
Morningstar uses a comprehensive net present value (NPV) technique for valuation. Many investors consider this approach to be superior to using P/E ratios as we just did with FASTGraphs.

As you can see, on Morningstar’s 5-star system, Microsoft gets 3 stars, meaning that they believe that MSFT is fairly valued. They assign a fair value of $52 to the shares, compared to a recent price of $53.

According to Morningstar, MSFT’s average yield over the past 5 years has been 2.6%. With its current yield of 2.7%, the stock’s yield is just about at its 5-year average. That suggests that the stock is about fairly valued using this approach.

Using the 4 approaches just described, our valuation summary for MSFT looks like this:

So, while Microsfoft is a terrific company, now is not the time to buy it. By my 4 methods, it seems to be clearly overvalued. Buying a stock when it is overvalued sets you up for price disappointments in the future, not to mention a lower starting yield than you would get if the stock were more fairly valued.

With a high quality company like Microsoft, I would think that many dividend growth investors would accept a “fair” valuation and not require an obvious undervaluation. My estimate of a decent price for MSFT would be 10%-20% below where it is now, or about $45.

Interestingly, my estimate of a decent price is $7 per share below Morningstar’s fair price estimate. If all you were using were Morningstar’s valuation, you would conclude that MSFT is fairly valued right now. That said, Morningstar’s estimate is based on a “fair” P/E of 20, while I consider P/E to be “fair”at around 15.

Microsoft’s beta of 1.0 indicates a stock price that generally moves with the market, with about the same level of variability. So that is a neutral factor.

The second miscellaneous factor is analysts’ recommendations. I get this information from S&P Capital IQ. Their most recent report on MSFT shows that 35 analysts are folling the company, and that their average recommendation is 3.7 on a 5-point scale. On that scale, 5 = Strong Buy and 4 = Buy. So 3.7 = nearly a Buy recommendation. Obviously, the average analyst is easier on the valuation issue than I am.

One other factor worth mentioning with Microsoft is their program for share buybacks. They have been actively reducing the number of shares for the past several years. 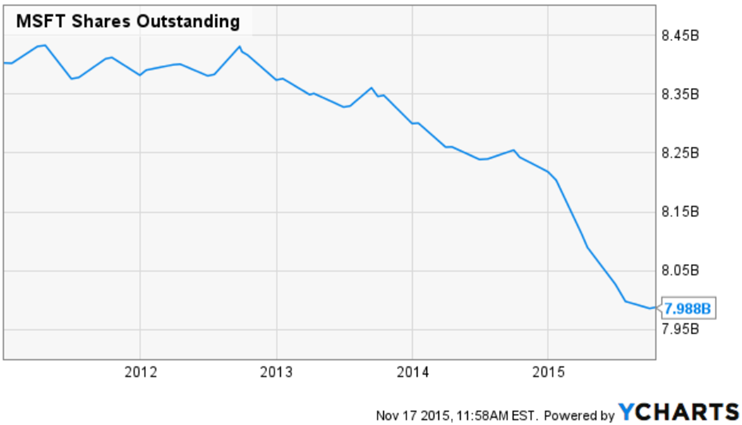 The company announced a $40 billion share repurchase plan in 2013, replacing a $40 billion plan authorized in 2008. The new plan does not have an expiration date.

Microsoft has about 5% fewer shares outstanding than it had 3 years ago. In theory, this benefits shareholders, because it increases the proportion of the total company that each one owns. That said, I am not overly impressed by the share reduction, because those shares have been purchased at prices that are not clearly undervalued. So it could be debated whether that has been a good use of the company’s cash.

Bottom Line
Microsoft is a great company that is a little pricey right now. Here are its positives:

• Dominant wide-moat businesses with Windows and Office.
• Sensible strategy of developing new businesses on the leading edge of technology – like cloud computing – while still enhancing and improving its franchise cash-cow businesses such as Windows and Office by incremental improvements and moving to subscription models.
• Massive customer base, with particular strength in enterprises.
• Apparent commitment to raising dividends, with a 14-year streak of increases and a 5-year dividend growth rate of about 17% per year.

MSFT’s seemingly high dividend payout ratio is misleading and nothing to worry about.

And here are Microsoft’s negatives:

• Overvalued after nearly doubling in price since the end of 2012.
• Participates in highly competitive information technology business.
• After initially missing the transition to mobile computing, must manage the tightrope between modernizing its businesses without losing the cash from its established businesses or lowering its margins too badly.