You may know that Warren Buffett has been purchasing large stakes in IBM since 2011. With the addition of 2.6 million shares in the 2nd quarter, IBM now accounts for about 11% of Berkshire Hathaway’s publicly traded stock holdings overall. See the Buffett Tracker – a feature at the top of every screen on Daily Trade Alert – for the exact numbers. Also follow the series on Buffett’s stock activities published every quarter by fellow contributor Jason Fieber, also known as Dividend Mantra.

Buffett’s no fool. He loves to own companies that are both undervalued and send lots of cash to headquarters.

Before we see how IBM stacks up as a dividend growth stock, let’s re-introduce this series on Dividend Growth Stock of the Month. So far in 2015 we have covered these companies and topics:

Disclosure and spoiler alert: I purchased IBM for my new rollover IRA earlier this year. In fact, I own every company named in the table above except TROW.

IBM’s dividend resume is one of the best that we have seen.

Its yield of 3.5% is good. Part of the reason for the high yield is that IBM’s price has been in a nearly 3-year decline at the same time that it has been increasing its dividend every year. We’ll talk about the price decline later, but for now note that all else equal, when a stock’s price declines, its yield goes up. 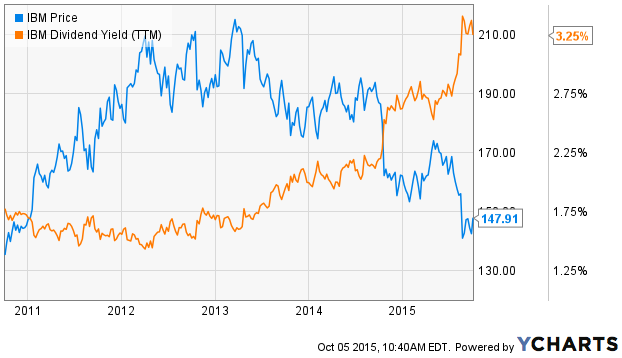 IBM has been increasing its dividend for 20 years, and its last 5 increases have averaged 15% per year, which is excellent. The increases have come in May each year. 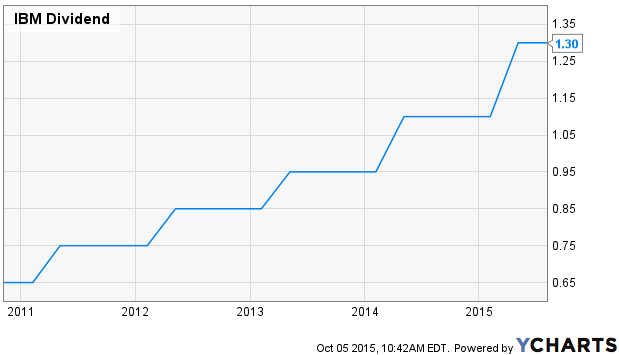 Finally, IBM’s payout ratio is only 35%. That leaves 65% of earnings per share for share repurchases and reinvestment in the company, which over the long haul should lead to growth. It can be inferred that management thinks this is the case, since it is unlikely that it would be increasing its dividend 15% per year if it did not think that its long-term growth prospects are good.

This is one of the best resumes that we have seen.

Obviously, the least favorable part of IBM’s quality resume is its huge debt. The average Debt/Equity ratio for all Dividend Champions, Contenders, and Challengers is 1.6. At 2.8, IBM’s is 75% higher. Most analyses that I have seen excuse the debt level on the bases that much of it comes from IBM’s financing activities, plus it has helped the company repurchase shares at good valuations. (We will discuss the share repurchases near the end of this article.)

No fewer than 4 of the ratings grade out as Excellent:

• Return on Equity (ROE) is about as high as you ever see, at more than 80%. ROE is a measure of a company’s effectiveness in converting revenues into profits. Anything in the high teens is considered good, and 80% is exceptional.
• Not only that, IBM has been delivering ROEs in the 50% and higher range for more than 10 years.
• IBM’s Quality Rating from S&P IQ is the highest they give, at A+. In a nutshell, the high grade means that S&P believes that IBM compares very well to a large and representative sample of stocks for good growth and stability of its earnings and dividends.
• Morningstar gives IBM a Wide Moat rating, its highest grade. That means that they believe that IBM has large and sustainable competitive advantages.

How Does IBM Make Money?
Founded in 1911, IBM is a major player in most areas that comprise the Information Technology sector.

[ad#Google Adsense 336×280-IA]It is among the largest software vendors and has the largest global services organization.

Overall, it is a huge company that offers IT services, software, computer hardware, fundamental research, and related financing for its customers.

For the past few years, IBM has been a company in transition, moving itself from the old days of “big iron” hardware to new initiatives like big data, cloud computing, data security, and the like.

Largely this is the result of divestiture activities running ahead of the growth of its new strategic initiatives.

The following is from IBM Chairman Virginia Rometty’s shareholder letter for 2014:

Information technology is one of the most dynamic, fast-changing and fiercely competitive industries in the world, characterized by relentless cycles of innovation and commoditization. Our choice is clear: We pursue a model of high-value innovation, rather than commodity technology, products and services. Our commitment to this model compels us to reinvent businesses continually; grow new ones organically and through acquisitions; and occasionally divest businesses that do not fit our profile.

As an example of what it means to shift the direction of such a large business, in 2014 Rometty said that IBM completed or announced the divestiture of 3 businesses that, while bringing in $7 billion in revenue, only delivered $500 million in profit — what she calls “empty calories.”

At the new end of the strategic spectrum, IBM is making significant investments in line with its forward strategies, including:

• Accelerating the commercialization of IBM Watson, bringing cognitive computing to more clients and partners in more industries.
• Expanding SoftLayer cloud centers around the world. The company expects to have 46 locations by the end of 2015.
• Further expanding its global IBM Cloud business through partnerships with SAP and Tencent.
• Instituting a partnership with Apple to bring mobility to the enterprise and reimagine the work of professionals.
• Growing its portfolio of industry-specific analytics solutions in areas such as oil and gas exploration, airline maintenance, and the Internet of Things.

These investments and strategic shifts amount to almost a continuing reinvention of the company, building upon a strong existing customer base while recognizing its changing needs. Together, cloud, analytics, mobile, social, and security generated $25 billion of revenue in 2014, up 16% in a year and doubling in size over 5 years to 27% of revenue. What helps give IBM a wide moat is its ability to integrate the new technologies with its clients’ core business processes, data, and systems.

At the same time that IBM has been growing the new strategic businesses, it has been modernizing its core franchises. For example, IBM swung its hardware businesses from losses to gains in 2014. Key elements of modernizing the hardware business include the sales of its older server and commercial semiconductor businesses; committing significant investments to the development of next-generation semiconductor technologies; and launching an entirely refreshed mainframe designed to support the mobile era.

Overall, IBM spends about 6% of its revenue on research and development, and the ratio is more than 12% in its software business. IBMers are prolific innovators. For the 22nd straight year, the company garnered the most U.S. patents of any organization, averaging 20 per day. 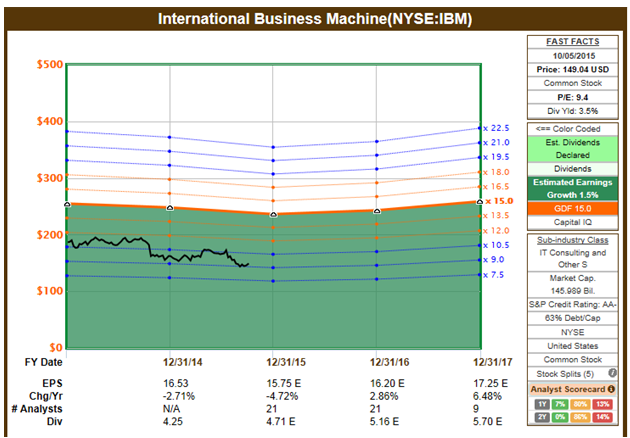 As you can see, IBM’s actual price (the black line) is far below its fair value when calculated by this way of measuring. At an actual P/E of 9.4, IBM appears undervalued by 37%. That is excellent valuation.

Step 2: FASTGraphs Normalized. The second valuation step is to compare IBM’s price to its “normal” long-term average P/E ratio. IBM’s P/E ratio has been declining steadily for the past few years, as the market has not fully accepted its ability to navigate the changes needed in the highly competitive IT sector. 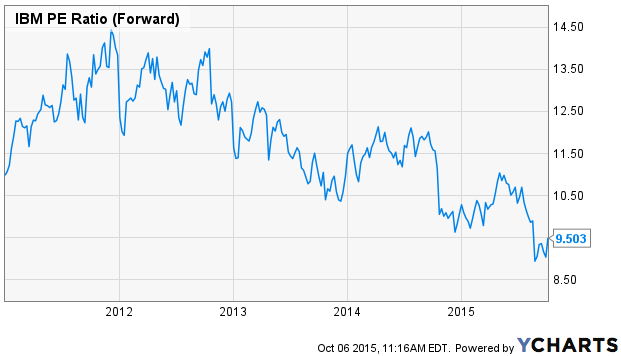 Given this decline, it is difficult to say what IBM’s “normal” P/E ratio is or what it ought to be. The longest historical average (18 years) available on FASTGraphs puts its normal P/E ratio at almost 17, but that seems too high. So I have chosen its 7-year average, which is 12.1. This is an educated guess on my part, reflecting a P/E ratio that I think IBM could return to if it is successful in continuing to restructure its business. 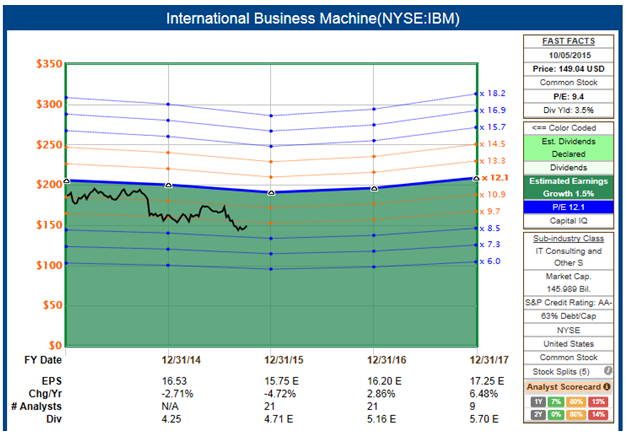 Even with this low-ball estimate of IBM’s potential P/E ratio, the stock still comes off as 22% undervalued.

Step 3: Morningstar Star Rating.
Morningstar uses a comprehensive NPV (net present value) technique for valuation. Many investors consider this approach to be superior to using P/E ratios as we just did with FASTGraphs.

Morningstar makes a comprehensive projection of all the company’s future profits. The sum of all those profits is discounted back to the present to reflect the time value of money. The resulting net present value of the future earnings is considered to be the fair price for the stock today.

As you can see, on Morningstar’s 5-star system, IBM gets 4 stars, meaning that they too think that IBM is undervalued. Their estimate of IBM’s undervaluation is that its current price is 10% below what they think is fair.

Step 4: Current Yield vs. Historical Yield.
Finally, we compare the stock’s current yield to its historical yield. It is better to be near the top of that range than the bottom. 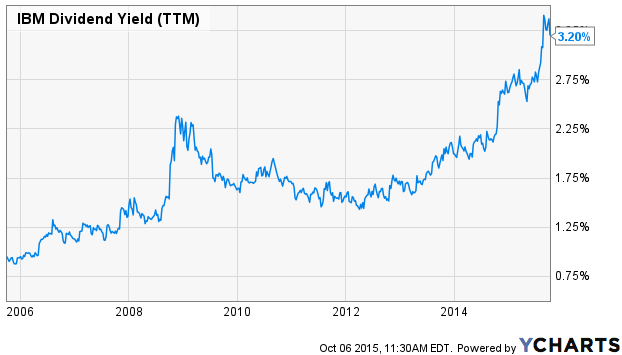 As you can see, IBM’s current yield is at the very top of its historical range. That suggests that the stock is undervalued.

Valuation Summary:
Our valuation summary for IBM looks like this:

By my 4 methods, IBM looks like it is greatly underpriced right now. In other words, it is a terrific buy.

IBM’s beta of 0.7 indicates a relatively stable stock price compared to the whole market. That is a plus for the company.

The second miscellaneous factor is analysts’ recommendations. I get this information from S&P Capital IQ. Their most recent report on IBM shows the following:

One other factor worth mentioning with IBM is their program for share buybacks. They have been actively reducing the number of shares for a decade. 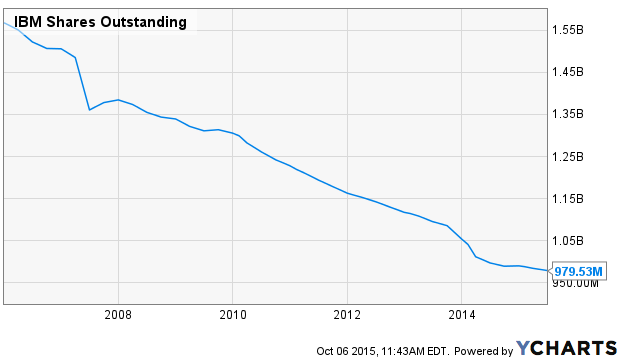 IBM currently has just 62% of the shares that it had 10 years ago. This improves all per-share metrics, such as earnings per share (EPS), dividends per share, and so on. I see this as a very helpful program, because it looks like IBM has been repurchasing shares at good valuations most of the time. When a company does that, it is one of the best things that it can do with its profits.

We began this article with Warren Buffett. Let’s end it the same way, with a quote from his 2011 Letter to Shareholders about IBM.

In the end, the success of our IBM investment will be determined primarily by its future earnings. But an important secondary factor will be how many shares the company purchases with the substantial sums it is likely to devote to this activity.

Bottom Line
IBM is an attractive dividend growth company. Here are its positives:

• Dominant wide-moat business (although participating in the highly competitive technology industry).
• Sensible strategy of moving from old hardware-based business model to more modern one based on Big Data, solutions, and services.
• Massive and strong customer base.
• Corporate culture of raising dividends, with a 20-year streak of increases and a 5-year dividend growth rate of 15% per year, all done while keeping the payout ratio low at 35%.
• Strong share repurchase program continues to add to the intrinsic value of remaining shares.
• Current yield is just about as high as it has ever been.
• Excellent valuation.

• Highly competitive information technology business base.
• Market has assigned continually declining P/E multiple to IBM, probably in recognition of its competitive industry and risks of not successfully turning massive company in right directions as fast as necessary.