This is the seventh installment in the Dividend Growth Stock of the Month (DGSM) series. The previous monthly articles have covered:

There have also been two bonus articles. One covered Apple (AAPL) as an up-and-coming dividend stock, while the other identified 71 overvalued Dividend Champions.

This month’s company is another one of my favorite dividend growth stocks. Realty Income (O) is a Dividend Contender whose dividend mission in life is described in its trademarked slogan: The Monthly Dividend Company. It has increased its dividends for 22 straight years, including three times already this year. It is a member of the S&P 500.

Let’s grade it according to our standard approach.

Realty Income is a real estate investment trust (REIT). We have already seen one REIT in this series, Digital Realty Trust in February.

REITs typically have higher yields than many “ordinary” companies, since in order to maintain their tax-advantaged status, they must pay out at least 90% of their taxable income as dividends.

[ad#Google Adsense 336×280-IA]Thus they are known as “pass-through” businesses, because most of their income is passed along to shareholders.

REITs are classified as Financials, although later in 2015, S&P will create a new category for REITs, in recognition that they are actually real-estate companies that differ from true financials like banks and insurance companies.

Realty Income’s current yield of 4.8% puts it in a higher-yield category than we often see in dividend growth stocks.

The average current yield for all 726 Champions, Challengers, and Contenders is 2.9%.

Therefore, I ease the grading on dividend growth characteristics, because you are starting out with such a high yield. O’s dividend growth rate is usually average for a high-yield stock (around 5%) or slow. As shown in the following table (from their website), their typical pattern has been to deliver slow annual dividend growth with an occasional jump upwards every few years. 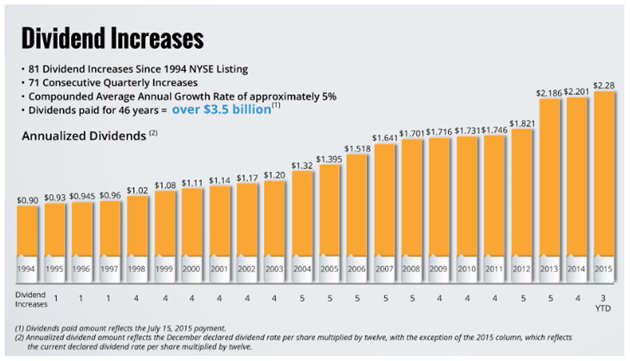 The most recent jump upwards was in 2013, when a large acquisition increased the size of the dividend pool considerably. They passed that along to shareholders in the form of a significant increase.

O’s streak of increasing its dividends stands at 22 years, and you will note from the chart that it pays monthly, typically raising the payout 4 times per year. Monthly payouts are important to some investors.

The 22-year streak is fairly remarkable, considering that period includes the real-estate crisis of 2007-2009. With the upcoming July payment, O will have paid paid 540 consecutive monthly dividends, including 84 increases.

In the center of the table, we see “Payout Ratio.” Realty Income is a REIT (real estate investment trust), and the typical payout ratio calculation based on earnings would be misleading. For real estate companies, the standard measure of profitability is called FFO (funds from operations). FFO more accurately reflects the company’s ability to generate cash to pay the dividend.

The FFO calculation adjusts for the fact that real estate, by its very nature, involves amortization and depreciation expenses that are not cash, but which must be subtracted from income to get to normal “earnings.” Thus it is universally accepted that net income is not a proper measure to determine dividend-paying capacity for a REIT, because the non-cash deductions distort it.

If typical net income were used to assess the dividend-paying ability for a REIT, it would usually appear that most of them pay out more in dividends than they earn. For example, Realty Income’s payout ratio using earnings as the divisor would indicate that it is paying out more than 200% of its profits as dividends.

But that is misleading, because of the depreciation write-downs. At the same time that a company is writing down the value of a property to conform to tax laws and accounting standards, its actual real value may be increasing, not decreasing.

On standard fundamental measures, as you can see, Realty Income presents a mixed picture. Its profitablity is glaringly low. All of its other grades are average or above.

How Does Realty Income Make Money?
Realty Income is a triple-net lease REIT. That’s a mouthful, but it is a common business model for real estate companies.

What it means is that the company owns real estate and then rents it out. The “triple-net” terminology simply means that the renter (say a retail chain) pays:

Typically, retail REITs have long-term leases with their customers. The leases generally run for 15 to 20 years. They have built-in regular modest rent increases to cover inflation and rising costs over time.

In Realty Income’s case, its revenues come from the cash flows from over 4,300 properties owned under long-term lease agreements with about 235 leading regional and national commercial tenants.

Realty Income pays a lot of attention to diversifying that revenue stream Here are how its tenants are diversified by organization:

Here is how its tenants are diversified by industry:

And here is how it is diversified geographically:

The business model results in a reliable cash flow stream that increases slowly over time. The business model, in fact, is not unlike my own business model as a dividend growth investor: Both are designed to generate reliable income that grows over the long term. For more on this comparison, see this article.

O’s tenants sign long-term leases with regular rent bumps. It has always taken a conservative approach to its capital structure, as shown by its relatively low D/E ratio. It has plenty of capacity available on its credit facility, and it should be able to take advantage of attractive acquisitions that become available.

Major growth in this business model comes from acquisitions. The rent bumps provide just modest growth. Historically, O has btaken a conservative, careful approach to acquisitions that has proven to be successful.

The company has in recent years begun to diversify away from its original core retail properties to include more industrial, distribution, office, and manufacturing properties. Retail properties still make up about 80% of its portfolio.

Please note that REITs such as Realty Income may perform poorly in market price when investors are concerned about rising interest rates and/or higher rates of inflation. O has shown a tendency to be sensitive to suggestions that the Fed is going to raise interest rates.

That said, nothing about interest rates should affect O’s ability to keep churning out those monthly dividends and quarterly increases. I love this conservative business model, and I give it 12 out of 15 points on my rating scale.

FASTGraphs 1. The first step is to compare the stock’s current price to FASTGraphs’ default estimate of its fair value. 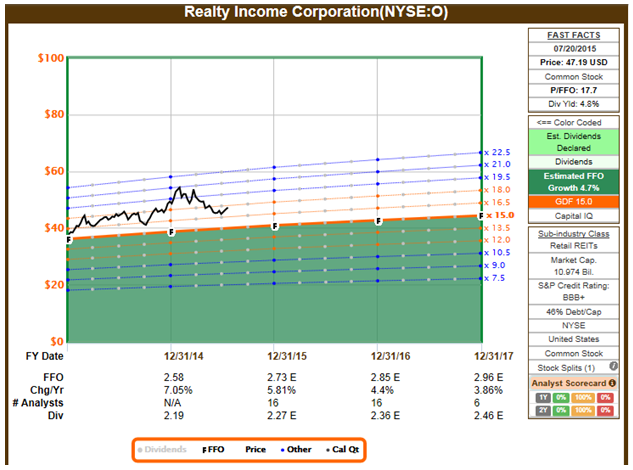 First of all, remember what I described above regarding REITs: Because traditional earnings are distorted by non-cash depreciation charges, a better measure of profitablity is FFO (funds from operations). On this graph, the fact that I have selected FFO is indicated by the “F” at each data point on the orange fair-value line. 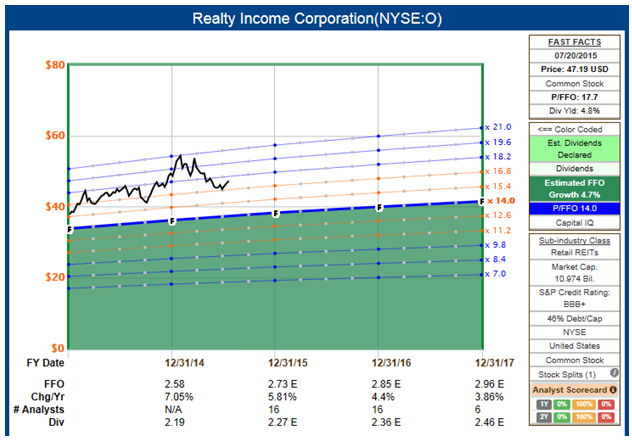 This makes the valuation appear a little worse. The actual price is in the third channel above O’s historical average P/FFO line, specifically it is 26% above. That is also overvalued.

Morningstar. Morningstar uses a comprehensive NPV (net present value) technique that many investors consider to be a superior method for valuing a stock. The idea is to calculate the current value of all the company’s future expected profits. The sum of all those profits is discounted back to the present to reflect the time value of money. The resulting net present value of all those future earnings is considered to be equal to the fair price for the stock.

On Morningstar’s 5-star system, 3 stars indicates fair value. That is, Morningstar’s NPV fair price for Realty Income is about the same as its actual price.

Current Yield vs. Historical Yield. My final step in valuation is to compare the stock’s current yield to its historical yield. It is better to be near the top of that range instead of the bottom.

I usually use a YChart to illustrate historical dividend yield, but their data seems to be flawed for Realty Income. Therefore as a backup I looked at Morningstar’s data for O’s historical yield. They list that as 5.0% for the past 5 years.

Given O’s current yield of 4.8%, that is basically the same, so I would rate Realty Income as fairly valued on this metric.

To be conservative, I consider Realty Income to be be overvalued at this time, despite the Fair valuations from 2 of the 4 approaches.

When I began writing this article in early July, O was fairly valued. But its price has gone up more than 6% in the past 3 weeks. Its yield has dropped from 5.1% to 4.8% as the result of that price increase.

I bought some O early in the month, getting a yield of over 5%, but I would not buy it now. That shows how fast situations can change with stocks. If I were in the market for O today, I would wait and see if its price drops into the $43-44 range from its current $46+.

Beta measures a stock’s price volatility relative to the market as a whole. Most dividend growth investors like to own stocks with low volatility, because then you are less likely to become emotional about them.

O’s beta of 0.4 indicates a very stable stock. Most dividend growth investors would consider that a strong plus for this company. Its price movements are generally much smoother than the S&P 500’s.

That said, as mentioned earlier, REITs tend to be sensitive to interest rates. From time to time, O’s price can move fast depending on the scuttlebut about rates. So the chances that O’s price will drop to a better valuation are pretty good, because the scuttlebutt changes almost daily.

The second miscellaneous factor is analysts’ recommendations. Most analysts are mainly interested in short-term price changes rather than dividend growth. Nevertheless, I like to see what the consensus ratings are. As you can see, per the most recent S&P Capital IQ report, 16 analysts cover Realty Income, and overall they score it 2.9 on a 5-point scale, where 1 = Strong Sell, 3 = Hold, and 5 = Strong Buy. So the analysts are rating O as a Hold right now.

That’s what I am doing with my O, holding it.

Bottom Line
Realty Income is one of the highest quality REITs available. Here are its positives:

• Very good yield, usually around 5%.
• 22-year streak of increasing its dividend.
• Usually increases its dividend 4 times per year, although the increases are often tiny.
• Decent forward estimates for earnings growth of about 5% per year.
• Conservatively run company with an excellent handle on what it does. Business model provides a reliable, slow-growing, revenue stream, most of which gets passed onto owners through the REIT structure.

• Slow growth, with occasional jumps when they make an sizable acquisition.
• Low profitability as measured by Return on Equity (ROE).
• Overvalued right now. Better values and higher yields have been available in the past, and they probably will be again in the future.

I would wait to buy O. I expect that its price will come down enough to give it a 5%+ yield, which it had just a month ago.

By the way, last month I wrote that I was strongly considering adding Johnson & Johnson (JNJ) to my new rollover IRA. A few days after the article appeared, I did just that. It now comprises a little over 5% of my IRA.