I hope that you have been enjoying this Dividend Growth Stock of the Month (DGSM) series. This is the sixth installment. Previous stocks in the series can be found at the link just provided.

This month’s company is one of my favorite dividend growth stocks: Johnson & Johnson (JNJ). As you will see, this is a superb company with an amazing past, solid present, and bright future.

JNJ is from the Health Care sector. It provides both prescription pharmaceuticals as well as everyday products that can be found in most households. That two-pronged approach helps make it such a solid company.

Let’s grade it according to our standard approach.

JNJ has been raising dividends for 53 years.

Only a handful of companies have longer streaks.

Its dividend growth rate has consistently been around 7% for the past few years.

That matches the average dividend growth rate of all Champions over the same time period.

The company’s 54% payout ratio is fine, suggesting that the dividend is in no danger from running out of money to pay it.

Of the 8 categories evaluated, JNJ gets the highest grade possible in 5 of them.

• JNJ has been delivering very good returns on equity (ROE) for more than 10 years, including the Great Recession years 2007-2009. ROE is a measure of a company’s efficiency in converting its assets into profits. JNJ has consistently been among the most efficient companies in turning its revenues into profits.
• JNJ is only one of a handful of companies with an AAA credit rating from Standard & Poor’s. You may recall that the United States’ credit rating is AAA-.
• S&P Capital IQ’s quality rating is the highest at A+. Capital IQ describes it quality rankings this way: “Growth and stability of earnings and dividends are deemed key elements in establishing S&P Capital IQ’s earnings and dividend rankings for common stocks.”
• Morningstar awards JNJ a Wide Moat rating, its highest grade. Here is what that means, according to Morningstar: “Economic Moat is a proprietary Morningstar data point. The idea of an economic moat refers to how likely a company is to keep competitors at bay for an extended period….[T]hink of it as the strength and sustainability of a firm’s competitive advantage.” Morningstar examines historical financial performance; competitive advantages compared to the competition; intangible assets such as patents and brands; cost advantages; attributes that give a company pricing power; and efficiencies of scale, among others, in determining its moat ratings.

JNJ gets the second-highest grade possible in its debt-to-equity ratio, which is 0.3. That means that in financing its operations, JNJ uses a little debt, but not much. The average D/E ratio for all Dividend Champions is 1.4. That is a high number historically, a fact that is probably explained by the low interest rates of the past few years. Companies have borrowed money because it has been so cheap to do so.

JNJ gets average grades for its earnings growth rates, which in recent years have been about 5% per year and are estimated to stay in the same range for the next 3-5 years. It is a fact that most extremely large companies, such as JNJ, have difficulty growing much faster than mid-single-digits. JNJ is no different in that regard.

The high quality ratings in other areas suggest that JNJ’s growth prospects are secure. So JNJ offers the prospect of solid growth that is not likely to be upset. In fact, Capital IQ says this about the low risk presented by JNJ:

Our risk assessment for JNJ reflects that its products are largely immune from economic cycles, that it does not rely on any single product category or customer for sustained growth and that it enjoys competitive advantages owing to its substantial financial resources, business scale and global sales capabilities.

A while back, I wrote an article entitled “What Is Quality in a Stock?” I used several tests of quality, including the kinds of tests that I use in this DGSM series. Only one stock passed all of the tests: Johnson & Johnson. In my 8 years of writing the annual Top 40 Dividend Growth Stocks series, only a handful of companies made the Top 40 every year. JNJ is one of them.

The following is one of my favorite graphs in all of investing. I trot it out every chance I get when someone asks me to explain dividend growth investing. 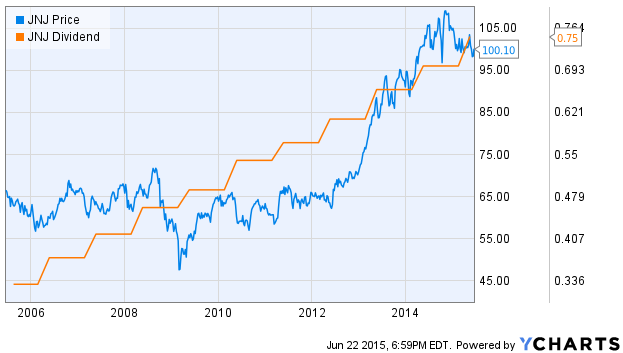 The reason that I like this graph so much is that it shows the very essence of dividend growth investing.

Thise gyrations are what an investor fixated on price must deal with. Investors shoot themselves in the foot when they get too euphoric from price rises or panic when prices fall. Emotions cause them to buy and sell, often at the wrong times. Note that JNJ’s varying price does not reflect its quality or consistency of measures like ROE or earnings growth that we saw above. The shifting prices represent emotionalism in the market.

Now look at the orange line. That is JNJ’s dividend payout each year for the past 10 years. Ten years, 10 increases. While the market may have been kicking JNJ’s price around, JNJ’s management kept a steady hand at the tiller when it came to dividends.
Every year, they have just raised the dividend, by around 7% per year.

They have been doing this for 53 years. Here is a dividend chart that goes back to 1985. 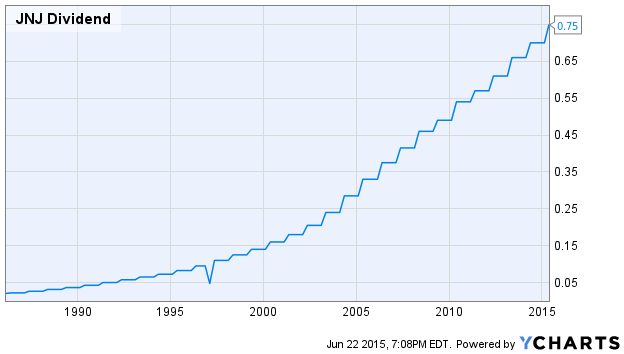 The apparent blip down in 1997 is a data error. JNJ has been increasing its dividend every year since 1962.

How Does Johnson & Johnson Make Money?

Johnson and Johnson is the world’s most comprehensive manufacturer and distributor of health care products, medical devices, healthcare consumer goods, and related services.
The company has a diverse revenue base. Its products are not cyclical (that is, demand does not go up and down because of economic cycles), and it does not rely on any single product category or customer type for sustained growth.

JNJ has more than 250 operating companies located in 75 countries, with more than half of its revenue coming from overseas. During the recent years of a strengthening dollar, its overseas sales have faced currency headwinds. For example, in 2015, Capital IQ estimates a 7% adverse impact from foreign exchange. Foreign exchange rates tend to flip-flop over long periods of time, and there will come a day when exchange rates favor JNJ.

JNJ has a slew of great brands in its respective segments.

Fiscally conservative for decades, JNJ is one of the few companies with an AAA credit rating. The company generates tons of cash, which fuel perpetual dividend increases while still leaving plenty left over for building organically and making acquisitions to fuel growth.

JNJ has a superlative record of innovation. It maintains a strong R&D spending ratio (about 11% of revenue), and it is considered to have one of best pipelines in the pharmaceutical industry, with a continuing parade of new drug trials and launches. JNJ faces few major patent expirations in the next 5 years, although sales of Hepatitis C drug Olysio will likely face a steep decline with the approval of competing products.

Johnson & Johnson also makes frequent acquisitions. It acquired Swiss orthopedic devices maker Synthes in 2012, which was the largest acquisition in company history (~$21B), giving JNJ a 50% share of the bone-trauma market. Future growth potential in that area will come from emerging geographic expansion.

On the 15-point scale that I use to judge a company’s Story, I give JNJ +12. Few companies rate that high.

My 4-step process for valuing companies is described in Dividend Growth Investing Lesson 11: Valuation. Here are the steps applied to JNJ.

FASTGraphs 1. The first step is to compare the stock’s current price to FASTGraphs’ default estimate of its fair value. 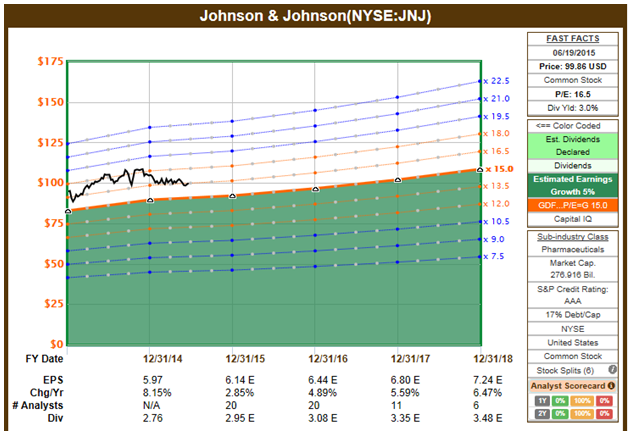 JNJ’s price (black line) is just on the border between the first and second channels above the fair-value line (orange). I call this fair value, but note that it is, in fact, 10% above the orange fair-value line. (That is my dividing line between fair- and over-valued.)

FASTGraphs 2. The second valuation step is to compare JNJ’s price to its “normal” long-term average P/E ratio. The stock market often gives higher- or lower-than-normal valuations to particular companies. Quite often, a high-quality company like JNJ seems perpetually to be assigned a higher P/E ratio than the market at large. 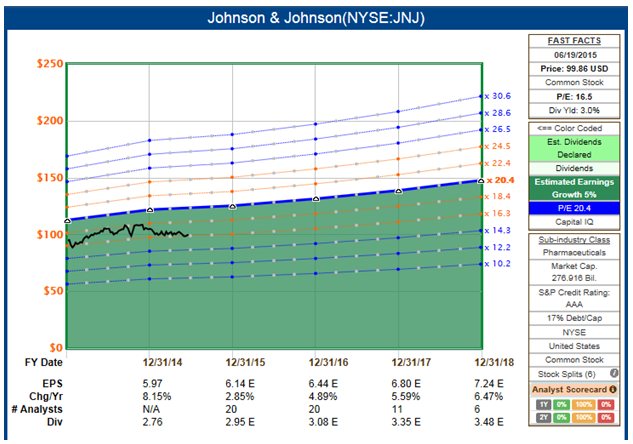 That is the case here. JNJ’s average P/E ratio over the past 19 years has been 20.4 (blue line). At its current price, JNJ’s P/E ratio of 16.5 is actually 19% below that long-term average. That puts it squarely in under-valued territory by this measure.

Morningstar. Morningstar uses a comprehensive NPV (net present value) technique that many investors consider to be a superior method for valuing a stock. The idea is to calculate the current value of all the company’s future expected profits. The sum of all those profits is discounted back to the present to reflect the time value of money. The resulting net present value of all those future earnings is considered to be equal to the fair price for the stock.

On Morningstar’s 5-star system, 3 stars indicates fair value. That is, Morningstar’s NPV fiar price for the stock is approximately the same as its actual price.

Current Yield vs. Historical Yield. My final step in valuation is to compare the stock’s current yield to its historical yield. It is better to be near the top of that range instead of the bottom. 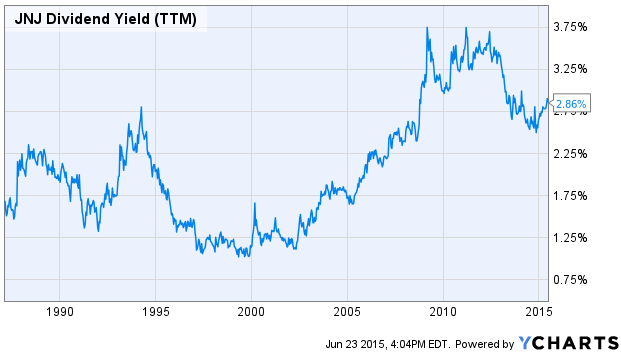 As you can see, while JNJ has been available at yields as high as 3.75%, its current yield (shown on this chart as 2.86%) is near the top of its historical range. Back in 2000, the stock (which was way over-valued then) barely yielded 1.0%.

We know that this chart is understating JNJ’s yield (which is 3.0%), probably because it is using a backwards-looking measurement. TTM stands for trailing twelve months. So I rate this metric as suggesting that JNJ is undervalued right now.

As shown in the last line of the table, I consider JNJ’s stock to be a little better than fairly valued at this time.

Beta measures a stock’s price volatility relative to the market as a whole. Most dividend growth investors like to own stocks with low volatility, because then you are less likely to become emotional about them.

JNJ’s beta of 0.6 indicates a very stable stock. Most dividend growth investors would consider that a strong plus for this company. Its price movements are generally much smoother than the S&P 500’s.

The second miscellaneous factor is analysts’ recommendations. Most analysts are mainly interested in short-term price changes rather than dividend growth. Nevertheless, I like to see what the consensus ratings are. As you can see, per the most recent S&P Capital IQ report, 20 analysts cover JNJ, and overall they score it 3.6 on a 5-point scale. 1 = Strong Sell and 5 = Strong Buy, so a rating of 3.6 means that the consensus is about midway between Hold and Buy.

Johnson and Johnson is a classic dividend growth stock. Here are its positives:

• JNJ is a very high-quality company.
• It is a Dividend Champion.
• It has a decent yield (3%) and decent dividend growth rate (7% per year).
• Estimates are for continued business success and decent earnings growth for a company of its massive size.
• It is fairly valued.

• Its yield could be a little higher.

That’s the only negative thing that I have to say about Johnson & Johnson.

Personally, I like to purchase stocks when they have yields of 2.7% or more, so JNJ makes that cut-off right now. Given all of its other strengths, I am strongly considering adding JNJ to my 401(k) that I recently rolled over into an IRA.