Welcome to the fourth Dividend Growth Stock of the Month for 2015. So far this year, we have examined:

One of the themes of this series is that dividend growth companies can come from practically any sector or industry. The industries represented in the first three choices are telecommunications, REITs (real estate), and industrial equipment.

Today we add a fourth: Non-alcoholic beverages, from the economic sector known as Consumer Staples.

As you can see, KO’s dividend resume is very good.

• At 3.2%, the company’s yield is around average for the best dividend growth stocks. It is well above the average yield of all 690 Dividend Champions, Contenders, and Challengers (CCC), which stands at 2.8%.
• The 53-year streak of increasing dividends is extraordinary. Only 10 companies in the CCC universe have longer streaks.
• Coke’s increase this year was 8.3% and last year was 8.9%. I rate these as Good increases. While the average most-recent increase for all CCC companies was 9.8%, many of those are stocks with much lower yields and much shorter streaks of dividend increases. For a company of Coke’s quality and 5-decade streak of increasing its dividend every year, I believe that anything above 7% is a good increase.
• Similarly, KO’s 5-year DGR (dividend growth rate) of 8% is Good, being higher than the average for all Dividend Champions (7%).

The only area of concern is Coke’s dividend payout ratio. That stands at 75% of EPS (earnings per share). In other words, for every dollar of profit, Coke is paying $0.75 back out to shareholders. The average payout ratio for all 690 CCC companies is 49%. 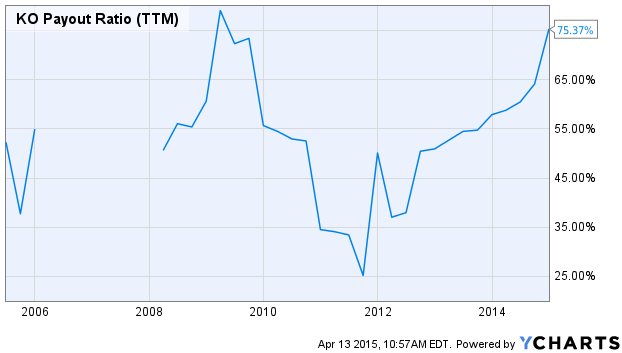 For some companies, a payout ratio of 75% might suggest trouble around the corner for future dividend growth. But I am not worried about it in Coke’s case.

[ad#Google Adsense 336×280-IA]Partly this stems from the fact that they just increased their dividend by more than 8%.

If they had seen the need, they could have declared a much smaller increase and brought the payout ratio down considerably.

As the saying goes, the safest dividend is one that has just been raised.

I interpret the recent 8% increase as a sign of management’s confidence in the company’s outlook rather than an alarming signal.

Plus, the company has more than $21 Billion in cash on its books.

It is not going to find itself in a cashflow problem any time soon.

Overall, Coca-Cola’s dividend resume is one of the best. Obviously, returning cash to shareholders via dividends is firmly embedded in the company’s culture.

Earlier, I mentioned Coca-Cola’s quality as a company. Let’s take a look.

• KO’s credit rating (from S&P) is one notch from the top, and so is its Quality Rating from S&P Capital IQ.
• Morningstar awards Coke a wide moat rating, which is its highest designation, citing KO’s world-class brand image, strong distribution network, and economies of scale.

The latter forecast earnings growth rate of 5% per year is not bad for a company of Coke’s size and quality. The more recent weak growth rates are attributable to flattening sales volumes and negative foreign exchange rates. The company has ambitious targets in its 2020 Vision, including volume growth of 3%-4% per year, approximately 5% annual revenue gains, earnings that grow slightly faster than that, and $3 Billion in annualized cost-cutting savings by 2019.

The soft growth rates in product shipments reflect changing tastes, as younger people shift from carbonated beverages to “still” beverages like water and fruit juices. As will be seen in Coke’s Story below, the company is making strides in changing its product mixture to appeal to changing tastes in its markets.

Coca-Cola’s Story: How Does It Make Money?

Coke’s scale gives it important cost advantages, which help it to achieve the fine ROE that we saw in the last section. It also controls one of the finest distribution systems in the world.

Those figures do not add up to 100%, because KO classified some sales to its Bottling segment. A few years ago, the company acquired its bottlers as a way of gaining more control over its distribution chain. The experience has been mixed, and KO is now in the process of divesting its bottlers. Bottling is a low-margin business, and Coke’s margins have been lower since it acquired its bottlers.

In recent years, the beverage industry has grown more rapidly in still beverages than in carbonated soft drinks. KO has been acquiring still beverage brands and products for over a decade to keep itself aligned with these changing tastes. The volume from still products has risen to about 26% of KO’s total from 20% in 2007.

In addition to its dividend payouts, KO has been steadily reducing its number of shares outstanding. It does this by purchasing its shares on the open market and retiring them. 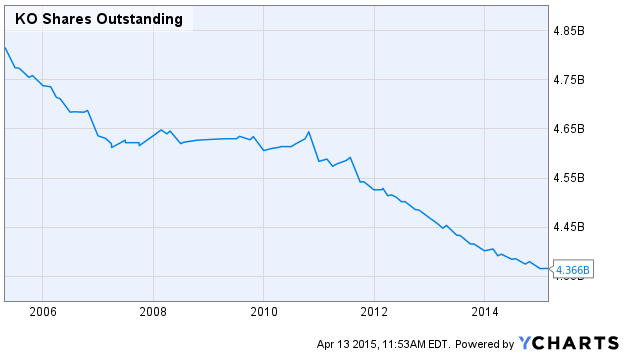 As you can see, Coke has reduced its share count about 10% over the past 10 years. This benefits shareholders in several ways:

• Each remaining share represents a bigger slice of the whole company;
• That helps increase earnings per share; and
• It is easier for the company to grow its dividend per share, because the same pool of money needs to be paid out to fewer shares.

Coke has a very strong balance sheet, including more than $21 Billion in cash. This is how the company presented its cash management program in late 2014: 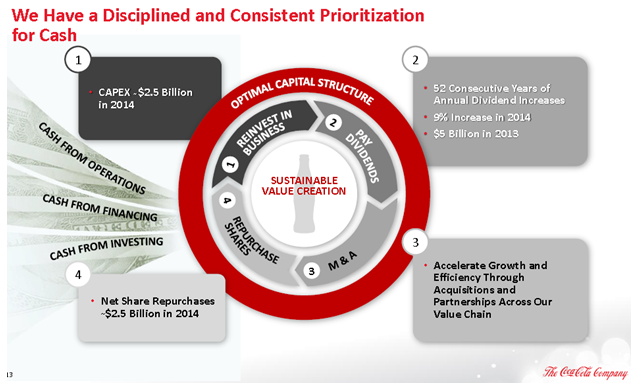 Note in this diagram that paying dividends ranks #2, ahead of M&A (mergers and acquisitions) and share repurchases.

Overall, I would award Coca-Cola 9 points out of a possible 15 for its business model. The score would be higher but for the changing market for soft drinks and the continuing need for Coke to change its focus to keep up with its changing market.

I follow a 4-step process in valuing companies. It is described in Dividend Growth Investing Lesson 11: Valuation. The idea of valuation is to interpret how a stock’s actual price compares to what it “ought” to be based on its business and financial outlook.

FASTGraphs 1. The first step is to examine the stock’s current price to FASTGraphs’ default fair value. FASTGraphs computes the default using a P/E (price-to-earnings) ratio of 15, which is the historical long-term P/E ratio of the market as a whole. 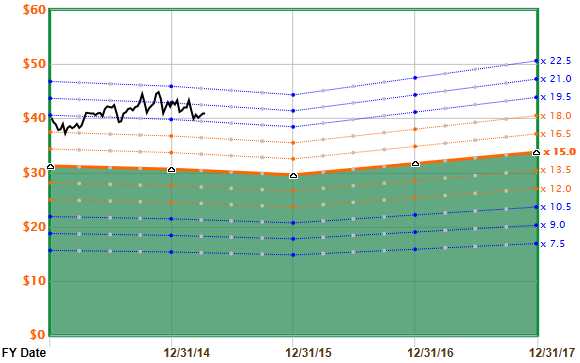 From this perspecive, KO is far overvalued. Its price (black line) is about 35% above its fair value (orange line). Of course, this interpretation of value is based on the default P/E ratio of 15. Is that a “good” ratio to use for Coca-Cola?

FASTGraphs 2. The second valuation step is to compare KO’s price to its “normal” long-term average P/E ratio. When we do this, we get a different picture. 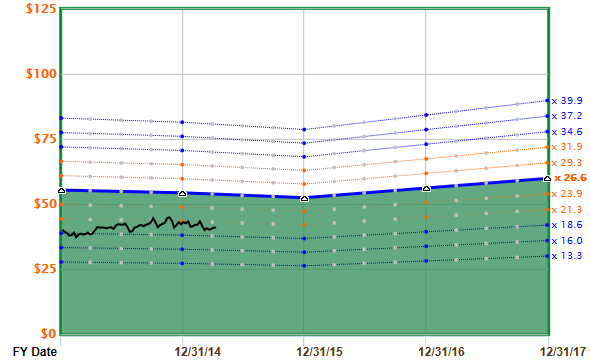 Now, we see that KO has historically traded at a much higher valuation than the whole market. Its 20-year average P/E ratio has been a whopping 26.6 (blue line). At its current P/E of 20.2, KO is trading at a 24% discount to its historical average.

We often see this with high-quality companies like Coca-Cola. The market seems to be more comfortable with rock-solid companies of this type, and therefore it is willing to take on more risk with them by pricing their stocks more highly.

So by this measure, KO’s valuation is good, running well below its historical average.

Morningstar. Morningstar does not use P/E ratios in its valuations. Instead it uses a comprehensive NPV (net present value) technique that many consider to be a superior approach. The idea is to evaluate the current value of all of Coke’s profits to come in the future.

Morningstar presently rates Coke’s value as 4 stars out of a maximum of 5 stars possible. This means that they consider KO to be undervalued. In my nomenclature, that is a good valuation.

Current Yield vs. Historical Yield. My final step in valuation is to take a peek at a stock’s current yield compared to its historical yield. It is better to be near the top of that range instead of the bottom. 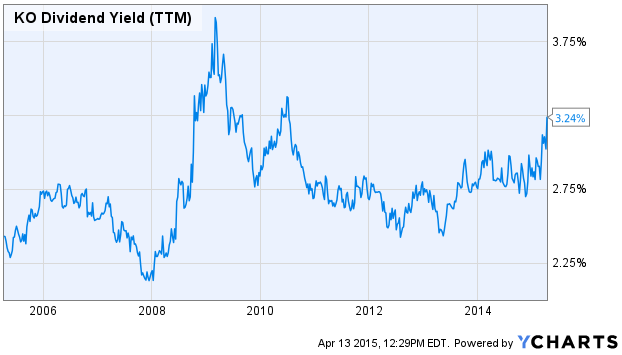 As you can see, Coke is available now with a yield well above 3%, which is a value that is not often attainable for this company. The comparitively high yield comes from the relationship of KO’s price to dividend payout. The recent increase in the latter kicked Coke’s yield up a little, because it was not accompanied by a proportional increase in price.

As with many dividend growth compannies, KO’s yield peaked when the market reached its crash low in early 2009. In interpreting these graphs, you almost need to ignore that period, as it was a once-in-a-generation situation.

Coca-Cola is one of those companies that many dividend growth investors consider to be a good deal if you can buy it when its yield is above a certain value. For KO, the yield most often mentioned as representing a good deal is 3.0%. Right now, KO’s yield is 3.2%, which is as high as it has been since 2010. That suggests that its valuation is good at the moment.

Here is a summary of KO’s valuation.

Obviously, if you require that any stock trade for less than, say, P/E = 17 or 18, KO is overvalued right now, and you should not consider buying it. The 4-step process above may strike you as misleading or naïve.

For me, the 4-step process brings a valuable perspective that goes beyond a simple view of the sotck’s P/E ratio. In fact, I am actively considering KO as a potential purchase when I reinvest dividends in May.

Beta measures a stock’s price volatility relative to the market as a whole. Most dividend growth investors like to own stocks with low price volatility, because then you are less likely to become emotional about the stock.

KO is a standout in this regard. Its price over the past 5 years has been 49% less volatile than the market. Such low volatility is typical of the Consumer Staples sector. “Staples” means products that people buy pretty much no matter what the economy is doing. Even in bad economic times, people still drink their water, juices, and beverages.

Coke’s steadiness also shows up in the consistency of its dividend increases. Look at how even Coke’s percentage increases have been over the past 15 years.

The recent increase of 8.2% fits right into that string.

The second miscellaneous factor is analysts’ recommendations. Most analysts are mainly interested in short-term price changes rather than dividend growth. Nevertheless, I like to see what the consensus ratings are, if for no other reason then to check for red flags that I somehow overlooked. As you can see, 30 analysts cover KO, and overall they score it 3.5 on a 5-point scale, where 1 = Strong Sell and 5 = Strong Buy. A rating of 3 is considered Hold. Coke’s rating is 3.5, which I call Hold+.

Coca-Cola is a classic American dividend growth company. Its business model is well conceived and has been successful for many decades.

The company’s dividend yield is solid at 3.2%, and its 53-year streak of annual dividend increases is one of the longest. Its dividends have been increasing at 7%-12% annually for a decade.

The only obvious downside to KO is its challenges in ramping up annual earnings growth. It has a strategy for doing that, and most analysts are predicting that it will succeed.

As I reinvest dividends during the rest of 2015, I will consider KO as a serious candidate. I currently own it, but it comprises just about 4% of my portfolio, so I have room to purchase more if I want to do so.