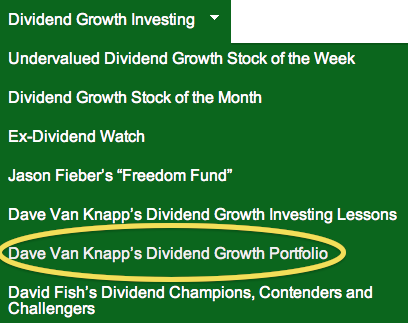 The DGP’s first and primary goal is to generate a steadily increasing stream of dividends paid by excellent, low-risk companies. By the time of its 10-year anniversary in 2018, I want the DGP to be sending me 10% of its original cost every year in dividends.

Let’s Talk about Portfolio Reviews
I run the portfolio according to a business plan, and one of my practices is to give the DGP a checkup twice per year. Like a doctor talking to a patient, I ask some very basic questions:

• How is the portfolio doing?
• Is it heading toward its goal?
• How is each stock position doing?
• Should changes be made to keep the enterprise on track?

Putting the Stethoscope on Each Stock
What I want to focus on in this article is the stock-by-stock review. I do not perform a complete clinical investigation, such as I would when considering whether to buy a new stock, or as deep as the ones in my Dividend Growth Stock of the Month articles.

Rather, my goal is to decide whether to keep the stock in the portfolio. I want to know if each one is generally healthy.

[ad#Google Adsense 336×280-IA]My portfolio had its checkup a couple of weeks ago.

My decision on all stocks in the portfolio was to continue to hold them every one.

I want to emphasize that, to me, these conclusions amount to making active decisions.

While I seldom trade or trim stocks, the decision to hold one is a deliberate choice.

After all, there are other things I could do with that money.

So each decision to hold a stock bears an opportunity cost. Therefore, I want reassurance that continuing to hold is in my best interests.

To illustrate, here are a few examplets of the decisions I reached this time around. I want to give you a flavor of how the process works.

BHP Billiton (BBL)
This mining, oil, and gas company is a bit of a pain to own. Being a foreign company, it pays dividends twice per year instead of following the standard American schedule of quarterly payments. Its results obviously are impacted by foreign exchange rates, which I find to be unpredictable. And BBL’s price is volatile.

Nevertheless, the stock has a fine yield (5.5%), and last year it increased its payout by 5%, which is a good rate of increase to go with a yield that high. So BBL is doing what I bought it to do: paying a healthy dividend and increasing it every year. Its streak of increases stands at 12 years.

Last year BBL announced plans to simplify its operations by spinning out a separate company to be called South32. The new company will get most of BBL’s aluminum, manganese and nickel assets plus some coal assets. When the spinoff is completed in May, I will receive 0.32 South32 shares for each BBL share.

My initial impression is that the spinoff will strengthen BBL, making it leaner and more focused. I will be looking for reassurances from the company that BBL’s dividend program will continue. I will decide what to do with the shares of South32 after I receive them.

Coca-Cola (KO)
This is a relatively new member of the DGP, but it is a longstanding dividend growth favorite. I purchased KO twice in 2014. Coke was the origin of the 4th step in my valuation method for stocks (see DGI Lesson 11: Valuation). I had been told by a veteran of KO and an expert in the company that its stock was a good buy whenever its yield reached 3% or above. I realized that is a pretty good way to look at most dividend growth stocks: Buy them when their yields are near the top of their historical ranges, because such opportunities do not come along very often.

KO has performed decently since I bought it. Its price is up about 5%, and it just increased its dividend 8% in March, which is a very good jump. Coca-Cola has one of the longest dividend increase streaks of any company at 53 straight years. Its price tends to be much less volatile than the market at large. Holding it is pretty much a no-brainer. Adding more is a distinct possibility, because its yield currently sits at 3.2% – more than the 3.0% benchmark.

Hasbro (HAS)
This toy and recreation company is one of the real success stories of my portfolio. I first purchased HAS in 2012. Since then its price has appreciated 67% and its dividend has gone up 22%. Its dividend increase for 2015 has already been announced: The next payment in May will be 7% higher than previously. HAS’s price tends to mirror market volatility. Its dividend increase streak stands at 12 years. I see no reason not to hold it.

Johnson & Johnson (JNJ)
JNJ has become one of the top 5-10 classic American dividend growth companies. It has increased its dividend for 52 straight years, and its 5-year dividend growth rate is 7.4% per year.

The stock currently yields 2.7%, which is about in the middle of JNJ’s historical range. The yield is lower than it was a few years ago. That is not because JNJ has not been raising its dividend, it is because JNJ’s price has risen rapidly for the past couple of years. As we discussed in DGI Lesson 6: Yield and Yield on Cost, yield and price are inversely related: When price goes up, yield goes down. It is an iron-clad mathematical relationship.

But remember, just because price goes down does not mean that the dividend payout goes down. They are independent from each other, as this chart illustrates. 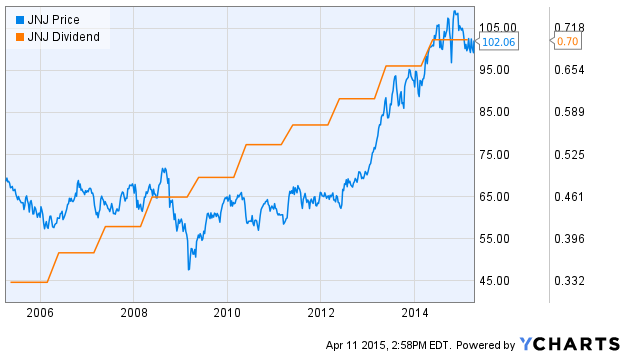 Johnson and Johnson is firing on all cylinders, and I love its two-pronged business model of well-known consumer healthcare and personal-care products combined with branded pharmaceuticals. This is a stock that I would consider buying more of if I already did not own so much. JNJ comprises nearly 10% of the whole portfolio, so I won’t be adding to the stake any time soon.

McDonald’s (MCD)
This stock – a long-time dividend growth stalwart – has become the opposite of a no-brainer. For several years, its economic performance has been deteriorating. Reading about the company is fascinating, as its problems are attributed to everything from dirty stores, bad food, and clueless employees to an overly complex menu and foreign exchange problems.

Some people have concluded that McDonald’s has been passed by competitors such as Chipotle, which ironically MCD used to own. A few dividend growth investors whom I respect have sold their stakes in the company.

I am not nearly so pessimistic. In order to sell MCD, I would need to believe that its business model is irretrievably broken, and I do not think that. The company, recognizing that it has problems, replaced its CEO late last year. McDonald’s has been through rough patches before and eventually figured out how to solve things, and I think that will happen again.

I am inclined to give the new executive team a year or two, because the company is a big ship that will take a while to turn around. If they were to cut their dividend, that would require an immediate reappraisal, but barring that, I intend to continue to hold.

The company’s price has stagnated since early 2012, and its last two dividend increases have been only 5% each. Those are disappointments given MCD’s historical record prior to 2013. Nevertheless, since I bought the stock in 2008, 2009, and 2011, my portfolio shows a blended gain of 52% for all three stakes. MCD’s 5-year dividend growth rate is 9.9% per year despite the two most recent paltry increases.

Its dividend growth streak stands at 39 years, and I think that is unlikely to be broken. However I do think that the increases for the next couple of years are likely to be small, quite possibly less than 5%. The 2015 increase will be announced in November and payable in December.

Summary
My goal in this article has been to illustrate portfolio management by sharing portions of an actual portfolio review.

I conduct these reviews each April and October. Many investors perform formal reviews 3-4 times a year, while others do it annually. However often you do it, the goal is to raise your head up out of the weeds of day-to-day fluctuations and take a more strategic perspective.

By far, the majority of decisions in all of the reviews that I have conducted for my Dividend Growth Portfolio have been to continue to hold each stock. Building a long-term stream of increasing income is a low-transaction enterprise. Dividend growth investing is largely a story of buying high-quality companies and then exercising patience as you collect more shares.

Please treat your investing like a business rather than emotionally. You will make better decisions if you keep fear and greed out of the equation.