For about a year, I have been tracking changes and news about my Dividend Growth Portfolio (DGP) on Daily Trade Alert. The portfolio is always available for your review via a link at the top of every page: 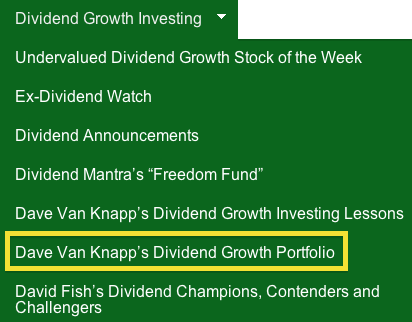 If you click on that link, it takes you to a page about the portfolio that I update each month.

It not only shows you the portfolio, but I discuss recent changes, the DGP’s history of generating growing amounts of cash, and other interesting perspectives. The portfolio is designed as a demonstration of dividend growth investing.

In addition to the monthly portfolio summary, I write an article every time there is a significant change to the portfolio. This is just such an article. It is about a dividend reinvestment that I recently made.

I reinvest dividends whenever they accumulate to $1000 cash in my account. That trigger amount was reached during the first week of January, so I was able to go shopping. I love going shopping with dividend income.

Before I tell you about the purchase that I made, let’s look back at the year just ended. In 2014, the $1000 shopping amount was reached three times, and I bought the following stocks:

• In May, I bought 15 shares of Ventas (VTR), a Real Estate Investment Trust, for $1033. That started another new position. (See the details in this article.)

The reason I just recited what I did last year is that it shows how dividend growth investing works. It is a cyclical process of buying shares, collecting the dividends, and reinvesting those dividends to buy more shares.

This leads to compounding, one of the most important concepts in finance. Compounding means making money on money already made.

[ad#Google Adsense 336×280-IA]That’s what happens with the process that I just described.

Dividends come in, and I collect them.

Then when I reinvest them, I get more shares.

Those shares themselves will generate their own dividends.

Thus, I will make more money on money already made.

Not only that, the “extra” dividends will eventually be reinvested themselves, purchasing yet more shares. When I was working, we called that sort of process a “virtuous circle.” It is like a snowball rolling down a hill, growing ever larger as it picks up more snow.

Here is how I picture the virtuous circle in dividend growth investing. 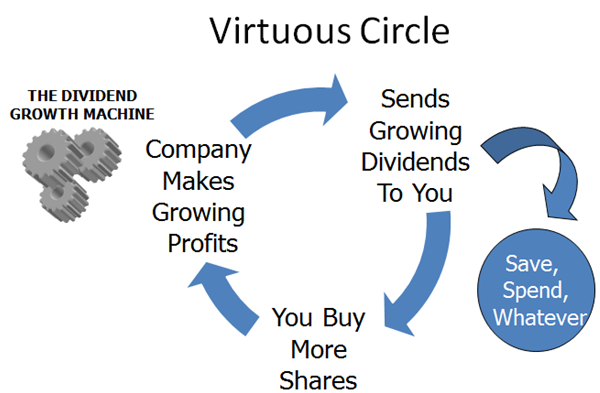 I recently reviewed my Dividend Growth Portfolio’s performance for 2014, and I made this discovery. The overall income from the portfolio increased 15% in 2014, but no single stock in the portfolio paid out 15% more in 2014 than in 2013!

How is this possible? Compounding makes it happen. The additional shares purchased with reinvested dividends have grown the portfolio enough so that its overall income rises faster than the dividend growth rate of any stock in it.

Here is the complete dividend growth story of this portfolio since I started it in 2008: 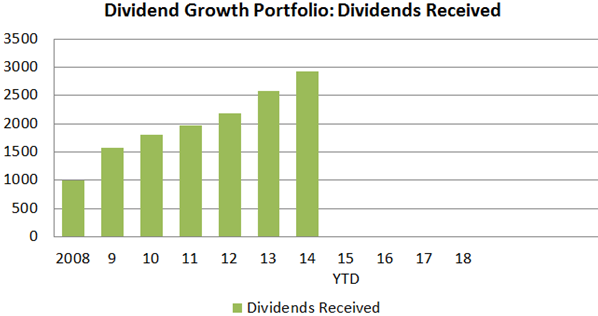 If you are working now, do you average a 13% raise each year? I’ll bet not. But that is the kind of result that you can generate “passively” from dividend growth investing.

Here’s another thing. The money comes in all the time. My DGP contains 18 stocks. Seventeen of them pay four times per year, and one of them pays monthly. That means that in this modest portfolio, I receive 80 dividend payments per year. That is an average of one every five days.

I am not going to go into details on the company and why I chose it. The benefits of owning AT&T will be covered in an upcoming article. This year, I am starting a new series called Dividend Growth Stock of the Month. The January article will be about AT&T. The first article should be out in about a week.

But I will tell you now about AT&T’s role in my portfolio. I own 97 shares of T. They were purchased in 2009 (35 shares), 2011 (32 shares), and the purchase that I just made (30 shares). The last two purchases were made via dividend reinvestment, so the majority of the portfolio’s position in AT&T has been built from reinvested dividends.

Just to be sure that you catch it, that is a living example of compounding again. Compounding has built 2/3 of my position in AT&T. Without reinvested dividends, these shares would not exist in the portfolio.

AT&T just raised its dividend. Its current payout rate is now $0.47 per share every three months, or $1.88 per share per year.

Since I own 97 shares, that means that I can expect to receive about $182 in the coming year from AT&T. The whole portfolio is generating about $3000 per year. Therefore, about 6% of my overall income will come from AT&T in the coming 12 months.

Furthermore, 62 out of the 97 shares were purchased with reinvested dividends. So about 2/3 of that dividend income from AT&T – or about 4% of the total income from the whole portfolio – is the result of compounding. That is income that would not exist but for the reinvestment of prior dividends.

Brush Up on Compounding and Reinvesting Dividends

I hope that this story has you interested in compounding, which has been called the most powerful force in the universe. (That is supposedly attributed to Einstein, although that is impossible to confirm.)

If you want to brush up on compounding, a good way to start is with Dividend Growth Investing Lesson 4: The Power of Compounding. Go read that, and if you have a few extra minutes, also read DGI Lesson 5: The Power of Reinvesting Dividends. Reinvesting provides an extra layer of compounding, which is what we saw in this article.

In a week or so, I will tell you all about AT&T.