Boring, for lack of a better word, is good.

You could do worse for investment advice than to paraphrase Gordon Gekko in this way. Burritos trading at $400-plus a share and a price-to-earnings (P/E) ratio of 37? No thanks.

No, give me a company that’s been doing basically the same thing for 85 years with very little debt, great management, and a dividend that has grown for 57 consecutive years — over half a century.

hose are the types of stocks that make you rich and keep you rich.

Founded in 1928, Genuine Parts is the leading independent U.S. distributor of automotive replacement parts. Auto parts represent roughly half of the business, with industrial parts accounting for about a third, and wholesale office supplies and electronic materials making up the remainder. If the Genuine Parts name doesn’t ring a bell, don’t worry. Its NAPA brand and Motion Industries do the heavy lifting for the majority of the business.

NAPA Know-How
To say that Genuine Parts is a well-run company is an understatement. Its long-term debt-to-capital ratio currently sits at barely 17%. Return on equity has averaged nearly 20% over the past 10 years while return on assets has hovered around 10% for the same time period. These are almost unbelievable numbers, but they’re the real McCoy.

But here’s the impressive part: Genuine Parts’ auto parts segment represents maybe 5% of the entire U.S. auto parts aftermarket. That’s because the $90 billion aftermarket auto parts business in the U.S. is highly fragmented. This gives Genuine Parts an incredible opportunity to capture more share both organically and through acquisition.

After buying a 30% stake in Australian aftermarket parts distributor Exego Group last year, Genuine Parts acquired the remaining 70% of the company in April of this year. With Exego’s annual sales of about $1 billion, analysts expect Genuine Parts’ acquisition to accelerate its earnings-per-share growth this year.

100,000 Miles Is The New 50,000
I have always been and, probably always will be a used-car guy. It drives my wife crazy (she’s the “new car” person in the household), but I just can’t stomach the idea of buying something that immediately loses $5,000 in value the minute you sign the papers. Twenty-five years ago, I wouldn’t have dreamed of buying a used car with 100,000 miles or more on the odometer. But most domestic and import cars are better engineered than they were two decades ago. The last two cars I bought had 104,000 miles on them. 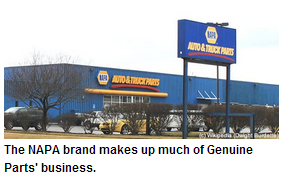 Now, I did my research and made sure I was buying something that would give me at least another 50,000 to 60,000 miles with little drama.

It was still running like a top when I traded it in.

I plan to do the same with my current ride.

And it seems I’m not alone. According to automotive market research firm R.L. Polk & Co., the average age of the 240.5 million cars and light trucks on U.S. roads is about 10.8 years. Although the weakened economy of recent years might be partly to blame for this statistic, it’s clear that Americans are driving their cars longer and buying used cars instead of new.

Although cars may be better built these days, they still require maintenance and repair. Professional mechanics and do-it-yourselfers alike need belts and clamps and hoses and everything else. And older cars are going to continue to need that kind of stuff.

Ironically, Genuine Parts is officially lumped into the consumer discretionary category. I’m really not sure who determined that aftermarket auto parts were akin to a luxury purchase, but to me, there’s a pretty big difference between a can of Fix-A-Flat and leather goods from Coach (NYSE: COH). As far as I’m concerned — and based on the nation’s automotive ownership habits — Genuine Parts is in the consumer staples business.

Risks to consider: The most noticeable chink in Genuine Parts’ armor is its lack of international diversification. The U.S. represents nearly 87% of the company’s revenue stream, and Canada contributes about 13%. Mexico, a giant automotive aftermarket opportunity, represents the sliver of a remainder. However, with Genuine Parts’ purchase of Exego, it appears the company is addressing that.

Action to take –> While shares of Genuine Parts Co. (NYSE: GPC) may seem expensive at around $82, owning shares still makes sense based on the company’s steady, long-term record of growing earnings and dividends. With low debt and a comfortable dividend payout ratio of 48%, the healthy balance sheet helps to ensure the consistent results that investors have grown accustomed to.

Look for the stock to approach new highs as the U.S. economy continues to improve slowly and consumers remain value-conscious. A 12-month price target of $98 is attainable; factoring in the 2.6% dividend yield, that’s a total return of 22%. Don’t be surprised if you get a dividend increase as well.

Sponsored Link: Rock-solid dividend-paying stocks like GPC are perfect for what we call the “Dividend Trifecta” strategy. Simply put, it’s a three-part approach to dividends that multiplies the effectiveness of every dollar you invest. Go here to learn more…