Dividend growth investing is the subject of a few myths, and every so often, we are going to explore one of them and explain what the truth really is.

Today’s myth is that when the market does badly, dividends dry up. It just isn’t true.

You will see some writers – who should know better – state that during difficult periods for the market, when prices are sliding, dividends come under pressure.

The fact is that dividends and the market are independent from each other.

Indeed, that is one of the reasons to invest in great companies that pay steady, rising dividends: The dividends continue to flow, and they can help cushion the fall from declining stock prices. Some call this “getting paid to wait” for the market to get back on its feet.

There are so many examples of the independence between prices and dividends that it is surprising that the myth exists at all, but it seems to persist.

New investors are especially vulnerable to it, as they haven’t yet learned to understand the two sources of return from the stock market: 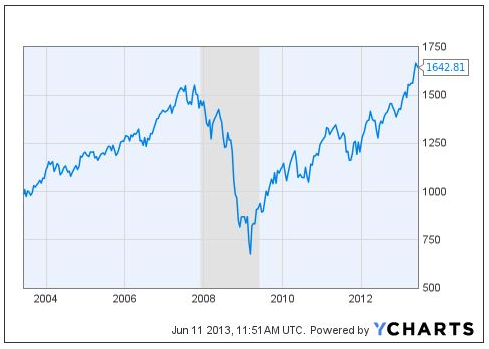 The shaded band in the middle of the chart is the Great Recession. As you can see, the S&P 500 reached a peak just before the recession started and bottomed out just before it ended. The total value lost from peak to trough was about 51% over 17 months. It was a hellish experience for many investors.

But many dividend growth investors had a different experience. Here, for example, is a chart of Johnson & Johnson (JNJ) — a stock that I own — covering the same time period. 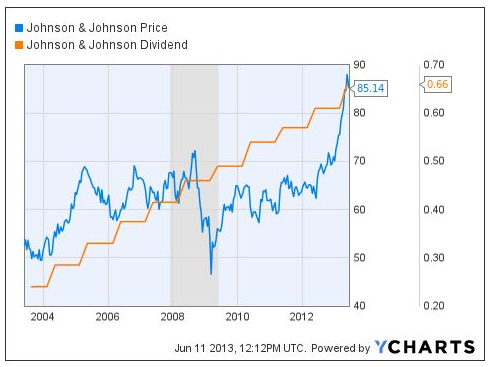 This chart separates the two components of total return. JNJ’s price is shown by the blue line, while its dividend is shown in red.

Note that the stock price of JNJ plunged during the market crash in 2008, as might be expected. In a broad bear market, most stocks are pulled down, even high-quality ones like JNJ.

But the dividend that the company issued kept being raised. Each stair-step in the red line represents one of JNJ’s annual dividend increases. There is no break in the string of increases. Two raises took place during the recession itself.

With its recent 8.2% dividend increase in 2013, Johnson & Johnson has hit a string of 51 consecutive years of raising its dividend. Its streak began in 1961. According to Putnam & Co., there have been 10 bear markets since 1961. JNJ has increased its dividend, without interruption, through all 10 of them.

There are many other examples I could give that would show the same story. Such well-known companies as Colgate-Palmolive (CL), Diebold (DBD), Emerson Electric (EMR), Genuine Parts (GPC), Lowe’s (LOW), and Procter & Gamble (PG) have streaks as long or longer than Johnson & Johnson’s. (Disclosure: I own PG.)

Here’s another aspect of stocks that deliver rising dividends: Your ride through bear markets is smoother. 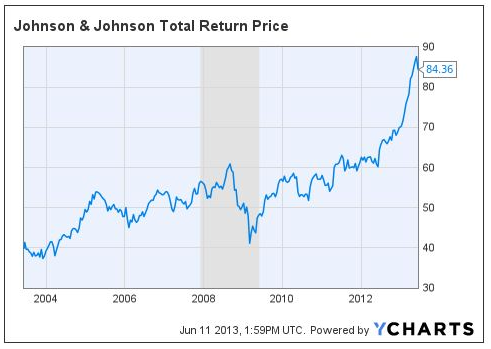 Notice that with price and dividends added together (your total return), the ride was much smoother. Compared to the 51% drop in the S&P 500 from peak to trough, JNJ’s total return dropped just 32%.

Don’t get me wrong, that is still a significant drop. But it is much gentler than the drop in the index, or in JNJ’s price alone.

Thus there are at least three “softening factors” that you get from dividend growth stocks:

All of these softening factors help you to hold on to dividend growth stocks during times of market turbulence. That is an important benefit. Studies show that average investors underperform the very instruments that they invest in. This happens because they panic and sell during difficult times, then wait too long to buy back in.

Simply staying the course results in better long-term returns, as the market has always recovered. But that’s hard to do when all the news outlets and talking heads are talking about doomsday scenarios. Growing dividends – providing that little bit of positive reinforcement each time you receive some cash from your investment – help you stay the course.

So that’s a myth dispelled. The next time you read someone equate market slides with dividend slides, or market turbulence with dividend turbulence, think to yourself that you know the facts. It just ain’t so. Dividends are independent from the market.