In our last lesson, we saw how a constant annual percentage increase in a company’s dividends causes your dividend income to increase at a growing rate. This is called compounding. It results from the snowball effect of each annual dividend increase building upon prior increases.

That snowball effect is the first layer of compounding in dividend growth investing. As illustrated in the last article, compounding is a very powerful way to build a growing income stream.

You can add a second layer of compounding that accelerates your dividend stream even faster.

You do this by reinvesting the dividends.

Your dividend income, which is growing anyway, grows even faster if you reinvest dividends.

You can reinvest dividend cash into the same stock that issued it, or you can use it to purchase shares of a different stock. Mathematically, it doesn’t matter. The effect is exactly the same: You will accelerate the rate at which your dividend income stream grows.

Reinvesting dividends does exactly that. We use incoming cash dividends (already earned) to buy more shares. Those shares then issue their own dividends. Those “extra” dividends are available only because we reinvested the first dividends. Thus, we create a second layer of compounding – of earning money on money already earned.

In a nutshell, here are the two layers of compounding in dividend growth investing:

First layer of compounding: Your dividend stream grows at an increasing rate, because annual dividend increases build on prior increases. (That’s what we learned in Lesson 4.)

Second layer of compounding: You take those dividends and reinvest them – i.e., buy more shares. Those additional shares then generate “extra” dividends. Thus the growth rate of your entire dividend stream is accelerated. Not only that, those extra dividends provide more cash to invest during the next cycle.

OK. Let’s look at this in the context of a real company. My fellow author Chuck Carnevale recently published an article illustrating the impact of reinvesting dividends in the same company. Let’s look at one of the examples he used in his article.

The company is a common dividend growth stock, Air Products and Chemicals (APD). The first display shows APD’s dividends from late 2003 to the first half of 2013. Chuck bases his illustrations on a hypothetical investment of $10,000, which in this case purchased 233.92 shares of APD in 2003. 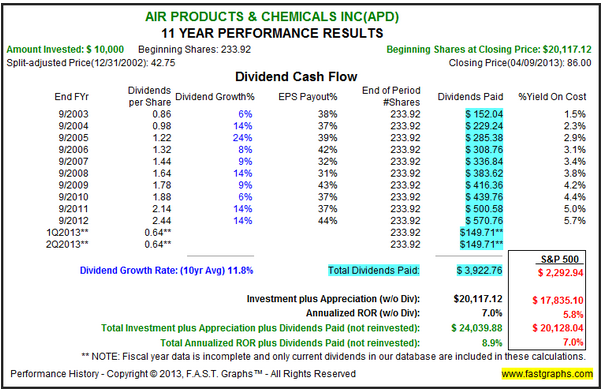 Those are great results, but watch what happens if you reinvested the dividends. 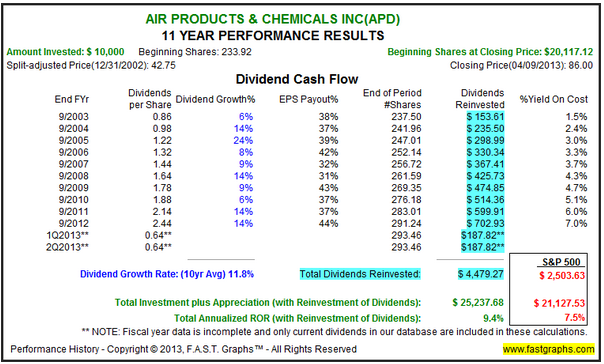 If the table were extended another 10 years into the future, the rate of pick-up of additional shares and the rate of overall growth in the dividend stream would continue to accelerate. Fortunes have been built in exactly this way.

As a postscript to this lesson, you may sometimes read that reinvesting dividends doubles your rate of dividend return. At some point far in the future, the total dividends you receive would, in fact, be twice as much with reinvestment than without it. But that takes far more than 10 years to happen in most instances.