This is one of the fundamental and most powerful concepts in investing. It is the method by which Warren Buffett has become one of the wealthiest men on Earth.

Alice Schroeder’s 2008 biography of Buffett was entitled, The Snowball. A snowball rolling down a hill is a vivid example of compounding. As the ball rolls, it picks up more snow that sticks to the snow already in the ball. The bigger the ball gets, the more snow it picks up. It will get bigger and bigger until something stops it.

Compounding is a mathematical phenomenon, and it is very powerful. Supposedly, Albert Einstein called it the eighth wonder of the world.

Say you own 100 shares of a stock with a dividend of $0.10 per share. If the company raises its dividend 10% every year, here is what the dividend cash flow to you would become each year (look in the third column): 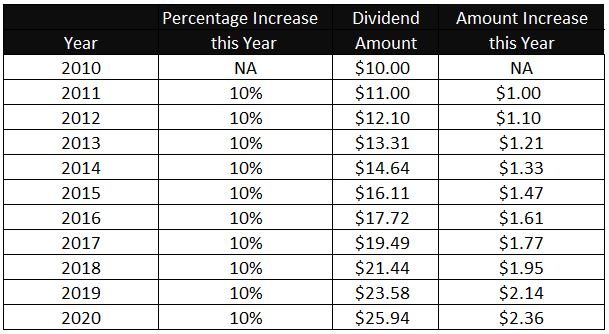 The table show how powerful compounding is. In 10 years, the dividend has increased to almost 2.6 times the amount of the first year’s dividend.

At first, this might seem impossible. After all, each year’s increase was just 10%. If you add up 10 years’ worth of 10% increases, shouldn’t that give you 100%? Shouldn’t the amount after 10 years be 2.0 times the beginning amount?

No! The reason that the amount after 10 years is 2.6 times the original amount is compounding. Each year’s 10% increase was tacked onto last year’s amount, which itself benefitted from prior compounding. It’s like the snowball: The bigger it gets, the faster it gets bigger.

That is shown clearly in the last column of the table. Each year’s dollars-and-cents increase in the dividend is larger than the prior year’s increase. So while the percentage increase stays constant at 10%, the dollar amount of increase grows every year. That’s the power of compounding.

In the example shown, the intuitive doubling of the dividend amount – to 200% of the original – has become 260%. That is a 30% increase (260 / 200 = 30%), and it is the source of the sub-headline for this article: How to Boost Your Dividend Income By up to 30% or More. The boost in income occurs because the company increases its dividend increases each year, and each increase builds upon prior increases.

You’re making money on money already earned, and that is the definition of compounding.

The most common mathematical measure to describe this acceleration is compound annual growth rate (CAGR). The CAGR for the table is 10% per year. When you are talking specifically about dividends, the term is called dividend growth rate (DGR).

In the example above, I presented the first year as 2010 and included some years in the future that haven’t happened yet. It would be fair to ask whether the table is a realistic example, do some stocks actually increase their dividends at around 10% every year?

The answer is yes. Here are five stocks that have done it. (I could have used many others as examples.) In the table below, I present stocks that have grown their dividends at approximately a constant percentage rate over 10 years. (The 10-year DGR is shown in the center column.) The last two columns illustrate how that DGR has increased the dollar-and-cents amount of the annual dividend over the 10 years from 2002-2012.

(Disclosure: I own Chevron.)

Every company is different. A company with a pretty high yield may grow the dividend at a slow rate. An example would be AT&T (T), which I own. The stock currently yields almost 4.7%, but its DGR over the past few years has only been in the 2% to 3% range each year.

Conversely, a stock with a lower yield may increase its dividend at a faster rate. An example would be ExxonMobil (XOM), shown in the table above. While we can see that its 10-year DGR has been a healthy 9.0% per year, its yield is just around 2.6% at the moment.

In later lessons, we will learn how to think about the ways that yield interacts with dividend growth rate. For now, the important take-aways from this lesson are these:

Please also note that we haven’t even talked yet about reinvesting the dividends. Dividend reinvestment allows you to buy more shares without putting any “new money” into your account. That provides another layer of compounding on top of the DGR compounding that we discussed here.

I hope that piques your interest, because we will talk about reinvesting dividends next time.