Welcome back! In the first two lessons, we learned what a dividend is and some basic concepts about dividend growth.

Here, I want to introduce my first “rule” for dividend growth investing: The 5-Year Rule.

Before I do that, let me say that my “rules” are guidelines that I follow.

They’ve served me well, but not every dividend growth investor does things exactly as I do.

Over time, as you learn more about the field, you can make up your own mind about what rules and guidelines are best for you.

The 5-year Rule simply says that a company must have raised its dividend for at least 5 consecutive years before I consider it as a dividend growth stock.

The thinking is straightforward. Since the goal of dividend growth investing is to produce income that grows reliably, I want to select companies that have grown their dividends reliably.

Of course, no one can predict the future. Any company can cut, freeze, or eliminate its dividend at any time. As we learned in Lesson 1, dividends are discretionary.

But the past holds clues to the future. Obviously, a company that has already compiled a streak of consecutive annual dividend increases has a track record that suggests that it might continue to do so.

A 5-year track record is certainly not the only evidence you might seek, but it is an important part. It is so important to me that I use it as a hurdle requirement. If a company does not have at least a 5-year streak of raising its dividends, I consider it ineligible for consideration as a dividend growth investment. I won’t buy it.

Streaks are easy to identify. At the moment, there exist nearly 500 companies traded on U.S. exchanges that qualify under the 5-Year Rule. We know this from the Dividend Champions document maintained by David Fish at The DRiP Investing Resource Center.

Let’s look at a few examples of stocks that pass this basic test. I own all of the following:

One reason that I like the 5-Year Rule is that the dividend (not price) charts of such companies look so beautiful. Like these: 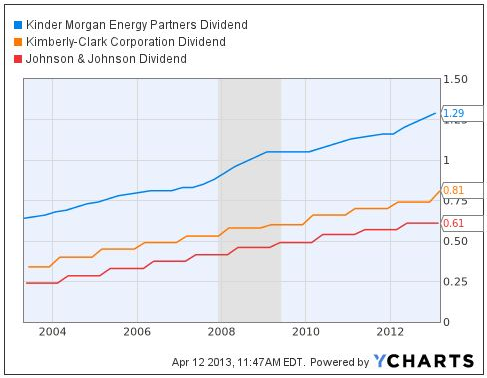 Those are exactly the way you want dividend growth stocks’ charts to flow: Up and to the right, all of the time. The increases keep marching up straight through recessions (shown by the shaded band in the middle) and other difficult events.

At the moment, the 5-Year Rule keeps me away from some stocks that in the past were dividend stalwarts, but that (unlike the companies above) were brought down by the financial crisis and Great Recession.

For example, several big banks (the Too Big to Fail ones that received bailouts) cut their dividends during the financial crisis. These are the kinds of dividend charts that I don’t like to see when considering new purchases: 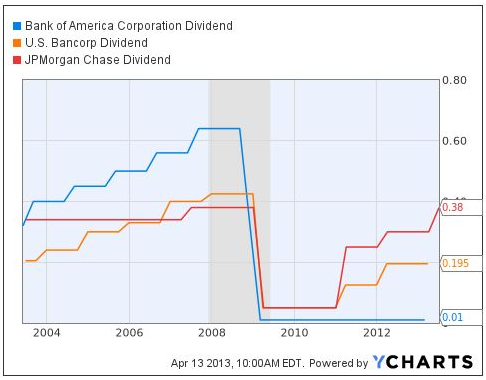 After their dividend cuts, two of the banks illustrated have begun to increase their dividends again, while the third (Bank of America) has not. Under the 5-Year Rule, I would not consider any of these banks eligible for investment until they achieve a new five-year streak of increasing dividends. The first time that could happen would be 2015.

It’s not always a widespread economic calamity that causes a company to cut its dividend. Some companies are impacted by issues that apply only to themselves.

A good example is British Petroleum (BP). After its oil spill in the Gulf of Mexico, BP was forced to cut its dividend. It needed to preserve cash for the potential payment of reparations and lawsuits to citizens who were damaged by the spill. 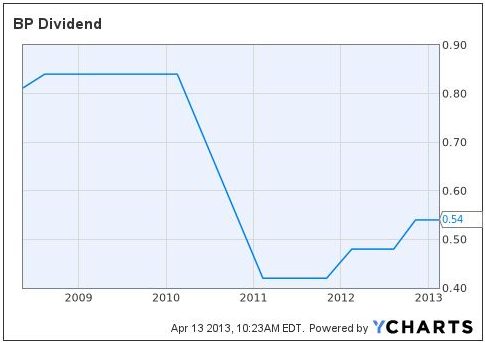 Again, not every dividend growth investor would agree that an explainable dividend cut is reason enough to disqualify a stock from consideration.

But to my way of thinking, a company that cuts its dividend has broken a link in a chain. Perhaps it becomes easier to break that link again for lesser reasons next time. I want companies that are clearly devoted to keeping their dividend growth streaks alive and have the financial strength to do so.

The 5-Year Rule helps me identify them. I want the best of the best.